The White House masters the art of saying little, and a would-be scandal about a senator's anti-gay remarks seems to fade away. 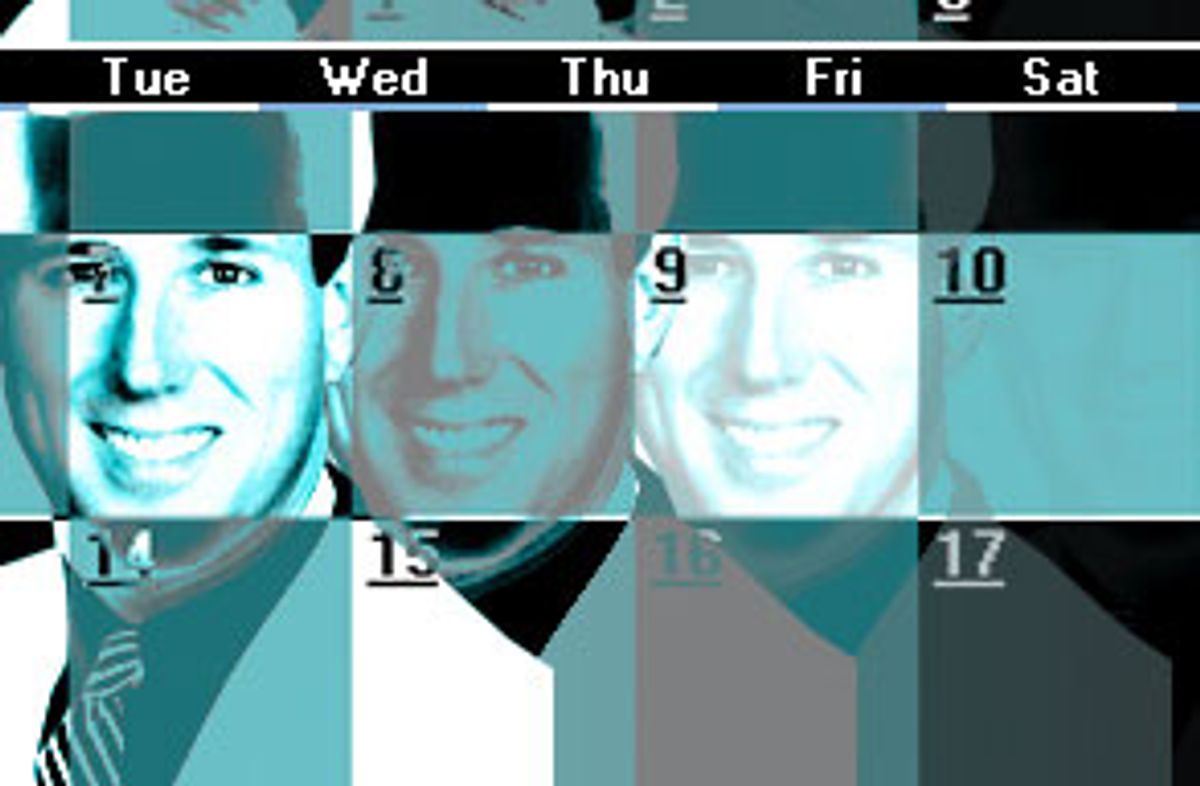 Tuesday marked a week and a day since the Associated Press published the controversial remarks of Sen. Rick Santorum, R-Penn., in which he seemed to equate gay sex with incest and possibly even bestiality. It was the fourth day since President Bush said, through a spokesman, that Santorum was an "inclusive man" who was "doing a good job as senator -- including in his leadership post." (Santorum is the No. 3 in the Senate GOP.) And it was the day Santorum himself was enthusiastically welcomed at a Senate GOP lunch, after which Majority Leader Bill Frist of Tennessee declared him to have "the full, 100 percent confidence of the Republican leadership in the United States Senate."

And with that, the furor seems all but over. A story broke in the Wednesday Philadelphia Inquirer that showed Santorum -- shortly after 9/11 -- fundraising for an anti-gay group promising to protect heterosexual marriage from "homosexual activists." The letter, mailed in early 2002, could be "truly the most important letter I ever write you," Santorum said, acknowledging that that "may sound like a huge exaggeration, particularly in light of the attack on America."

But it seemed to cause only a ripple of attention; no questions were even asked about it at Wednesday's White House press briefing.

The White House wanted the story to go away, and last week, along with leaders of the RNC, the administration instructed Republican officials in a conference call to stop commenting on the scandal altogether. That seemed to be that. The White House subscribed to its long-held theory that on issues surrounding gay and lesbian rights, silent = smart. With such hot-button issues on which Americans hold nebulous and self-contradictory feelings -- majorities support treating gays and lesbians equally but also think them immoral -- vagueness seems to have a certain political wisdom. It disappoints both gay voters and those who loathe them, but it provides politicians enough wiggle room to slide by unscathed.

Bush -- and to a degree, Santorum -- may even be able to survive the ire of some Republican gays. "To call Sen. Santorum 'inclusive,' I think was letting people see what they want to see," says David Greer, former president of the Pennsylvania chapter of the Log Cabin Republicans, a gay GOP group. "Does Sen. Santorum believe gays should be in the Republican Party? And was President Bush endorsing that? Yes." But Bush didn't comment on the content of Santorum's remarks themselves. "So I thought it was a carefully crafted response on the White House's part," says Greer.

Those already historically critical of Bush, of course, are still angry. David Smith, spokesman for the Human Rights Campaign, the nation's leading gay and lesbian lobby, says that Bush's comments "call into question what he means by 'inclusive.' Santorum doesn't think gay people should have constitutional protections" and he employed a "rhetorical political trick linking being gay with all these nefarious activities" -- bigamy, polygamy, incest and bestiality. The support of self-regarded "compassionate conservative" Bush "calls into question how deep his compassion is," Smith says.

Santorum's comments, after all, were fairly harsh. Asked about the privacy issues surrounding an anti-sodomy law debated in the Supreme Court review of Lawrence and Garner vs. Texas, Santorum said that "if the Supreme Court says that you have the right to consensual sex within your home, then you have the right to bigamy," polygamy, incest and adultery, acts all "antithetical to a healthy, stable, traditional family." Historically, Santorum said, society has viewed the institution of marriage as applying only to a man and a woman because they can procreate, while others cannot -- like homosexuals, "man on child, [or] man on dog."

Though he's disgusted by Santorum's comments and disappointed that the president didn't say anything to repudiate them, the HRC's Smith sees some progress in this area. "I believe that he's been weakened by it," he says. Santorum has "shown that there's a price to be paid" for such comments, he says, even if it's "clearly not commensurate with the price Lott paid" for his December 2002 comments in favor of the 1948 segregationist presidential campaign of Sen. Strom Thurmond, R-S.C. The Santorum controversy was a veritable Watergate compared to the reactions sparked by previous anti-gay statements from GOP politicians.

In 1995, then-Speaker of the House Newt Gingrich, R-Ga., compared homosexuality to alcoholism; four years later, then-Senate Majority Leader Trent Lott, R-Miss., compared it to kleptomania. In both instances, Smith recalls, the stories were no more than a one- or two-day flap. This was a bigger deal, with four Republican senators -- Sens. Olympia Snowe and Susan Collins of Maine, Gordon Smith of Oregon, and Lincoln Chafee of Rhode Island -- criticizing the comments.

Still, far more GOP voices were inclined to give Santorum a rah-rah than a raspberry; it would be incorrect to say that Smith and the HRC are pleased with what last week's brouhaha says about their cause.

Conservatives who share Santorum's views have their own complaints. Bush's comments came four days after the AP story was published, were delivered through a spokesman, and were issued on a Friday afternoon, thus making the least-read Saturday edition of most newspapers. Moreover, they didn't address the views themselves on the privacy issue and acceptance of gay and lesbian sexuality. Lori Waters, executive director of the conservative Eagle Forum, said that her organization and its members were disappointed that Bush didn't "take a greater stand on supporting Sen. Santorum. We don't feel like we've heard enough in his defense." Santorum, she said, "reflects the views of pro-family America. There shouldn't be anything controversial about defending a pro-family senator in the Republican ranks."

There is, however, one somewhat happy group. The handful of renegade gay Republicans who broke from the national Log Cabin Republican organization during the 2000 election -- already inclined to see a silver lining in every GOP cloud -- seemed as heartened as Waters was disheartened. Carl Schmid, former president of the D.C. chapter of the Log Cabin Republicans, says he disagreed with the Washington Post's characterization of Bush's remarks as a "strong defense of Santorum." Schmid called Bush's remarks "a weak, weak statement," that "didn't comment on what Santorum had said at all." That he called the senator "inclusive" is just to acknowledge that Santorum loves the sinner, hates the sin, and wants gays in the GOP as long as they're not acting on their sexual desires.

Moreover, Schmid said, Bush was merely embodying the country's mixed feelings on gayness. "That's why Bush didn't come out with a harsher criticism of Santorum," he said. "He's where America is. The president and the party are trying to seek this balance; they're trying to play both sides right now. Of course I would like him to say more, but I'm happy he gave a non-answer for the first four days."

To listen to these gay Republicans -- liberal gay rights activists have been known to call them "apologists" and worse -- is to appreciate the psychological strength (liberal gay activists might call it "denial") it must take to appreciate any apparent baby step. Former Rep. Steve Gunderson, R-Wis., who was outed on the floor of the House in 1994 by anti-gay former conservative Rep. "B-1" Bob Dornan, R-Calif., explains that last week the White House was dealing with major fractures within the GOP over the tax cut so he "understand[s] why they just chose to go on to other issues and try to let that one die. Every politician picks when and what battles they will fight. I think the White House just said, 'You know, that is just not a battle to fight today.'" Bush's refusal to comment on Bowers vs. Hardwick is the norm for politicians, Gunderson says. "When I was in Congress, my legislative guy said, 'You will not comment on anything before the court,'" he recalls.

The White House, of course, has weighed in on a case before the courts, against the University of Michigan Law School's affirmative action program.

Gunderson seems to think that all Santorum needs is to make a few gay pals. "I'm never surprised by comments that come from people who don't have warm, good relationships with people who are gay and lesbian," he says. "They simply don't understand the world in which we live. When I looked at Sen. Santorum's comments I thought, 'OK, help us get some sort of domestic partnership or civil union laws so we can have the kinds of domestic partnership you're talking about!' Our challenge is, How do we sit down and share with him who we are, where we are, and what our lives are all about?"

Greer voted for Santorum in the past, and though it seems unlikely that he will ever support the senator again, he looks forward to voting for Bush in 2004. "I would have liked certainly to have seen the president even go back to some of his 2000 'All citizens should be treated with dignity and respect,'" Greer says. But he is as pleased as punch with the president on other issues -- national security, taxes, and the administration's Global HIV/AIDS initiative the president discussed Wednesday in the East Room, one with which conservatives have been upset, since its components include safe sex and condom use.

"It's no news flash that this administration has political skills," Smith says.