This snazzy sequel to Bryan Singer's comic-book smash "X-Men" is sleek and sexy, filled with delicious characters and effects. Just don't compare it to the original. 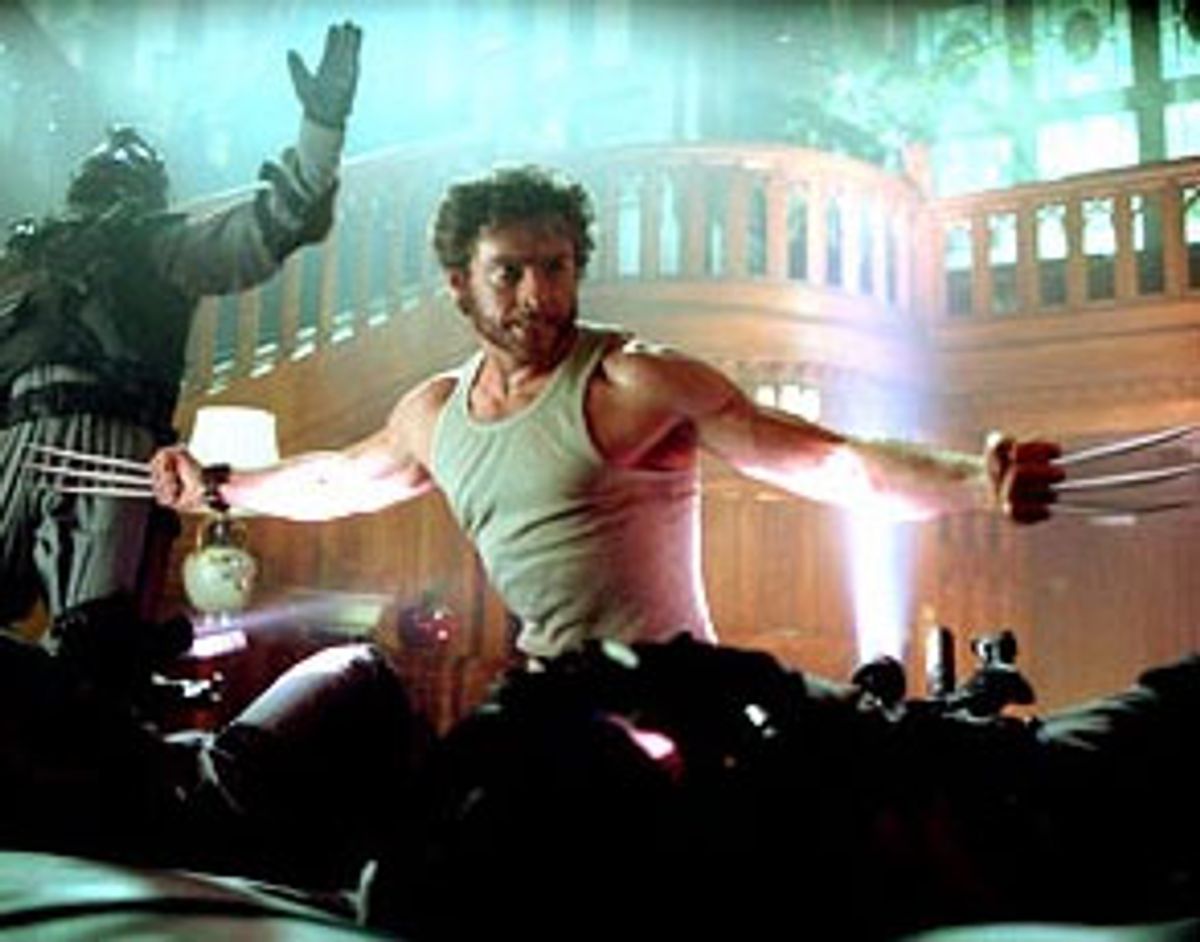 As movie diversions go, there's not a whole lot wrong with "X2," Bryan Singer's follow-up to the hugely successful "X-Men." In some ways, "X2" (which has also been promoted under the title "X2: X-Men United") is an obvious improvement on its predecessor: It looks more expensive, and its special effects seem to swoop out of nowhere -- they blend in with more pedestrian types of reality smoothly and seamlessly. "X2" is also unapologetically loaded with action: There are a gazillion plot sub-threads, and every time you think you're going to get a breather, some other snazzy bit of business grabs your attention.

The one thing "X2" has little of happens to be the one thing money can't buy: poetry. The hardest thing to reckon with is that "X2" seems just fine immediately after you've watched it. It's intelligently made, it's filled with characters we can easily care about, and it moves swiftly; though it's the first of the big summer movies, it doesn't feel clogged with its own grandiose intentions.

But the worst thing you can do for yourself is to go back and re-view "X-Men" just after seeing "X2." Much as I enjoyed "X-Men," when I first saw it I was rattled by the spottiness of its storytelling; it was designed to jump from plot point to plot point without fully resolving anything, demanding that you settle into its rhythms or be trapped in your own plastic prison forever.

But "X-Men" was undoubtedly the most elegiac comic-book adaptation of the past few years. When the characters spoke to each other -- or, better yet, touched each other, as in the scenes between the thinking-girl's redneck Wolverine and Rogue, with her lethal fingertips -- the connections between them often shivered with lyricism. As anyone who loves comic books will tell you, there's poetry in them, but you don't always find it in the words you read panel by panel, which can often seem clumsy and stiff. The lyricism of comic books is something that emerges only after you give yourself over to it, opening yourself to the overarching mood and delicate subtones that emerge page by page (it's not unlike the pleasure we get from moviegoing).

In "X-Men," Singer understood that delicacy intrinsically. Once you gave yourself over to the picture, the choppiness of its narrative retreated, like background noise, allowing the chemistry between the characters to drift to the fore. Long after the movie ended, those interconnections were the things you remembered most vividly.

"X2" isn't nearly that subtle. In fact, it's barely subtle at all. It plunges you right into its story, with very little introductory preamble, and that's precisely as it should be: Even if you've never seen "X-Men," it's not hard to sort the characters out as you go along. The plot -- or, at least, one-tenth or so of it -- involves a nasty former army commander, William Stryker (Brian Cox) who, with evil on his mind, stages a raid on the school for "gifted children" (in other words, mutants) run by Prof. Charles Xavier (Patrick Stewart). His chief objective is to seize Cerebro, a thingamabob that further enhances Professor X's already bodacious telepathic powers, which Stryker plans to use to find all the mutants of the world and do away with them.

Stryker tricks the imprisoned Magneto (Ian McKellen), a mutant with über-magnetized innards, into assisting him with this scheme; feeling duped, and recognizing how dangerous Stryker is, Magneto takes the surprising step of uniting with Professor X, his rival and sometime friend. The two of them had split long ago over the issue of whether mutants should prepare for war against the humans who want to marginalize them (Magneto's view), or make every effort to live peaceably among them (as Professor X advocates).

If you're not exactly sure what a mutant is, all you have to do is watch: There's the svelte, cerebral Jean Grey (Famke Janssen, subtly making the most of a role that isn't quite as jazzy as those of the other X-Men), whose telepathic powers are considerable, although they're nowhere on a par with those of her mentor, Professor X; Cyclops (James Marsden), Jean's beau, possessed of energy-beam eyes that he needs to keep hidden behind shades at all times; Storm (Halle Berry), who, despite her ability to conjure lightning storms with her eyeballs, barely registers as a presence at all; Iceman (Shawn Ashmore), a junior X-Man whose breath can turn a smoldering charcoal briquette into ice; and a new mutant, Nightcrawler (Alan Cumming), a twitchily elegant "transporter" who can whisk himself from here to there in a wisp of smoke.

But the three most riveting X-Men, here as in the first picture, are Hugh Jackman's Wolverine, a burly misfit from the outskirts of town (any town), who has the intuition and scenting capabilities of a wolf and who can shoot knifelike claws from his knuckles at will; Rogue (Anna Paquin), a teenager whose mere touch sucks the life force out of a person; and Mystique (Rebecca Romijn-Stamos), a lithe creature covered in silky blue scales who can take the form of any human being or mutant she wishes.

Singer understands that the chief pleasure of watching "X2" lies in seeing how these characters interact and tangle, both with one another and with their enemies. The action sequences are nicely shot, particularly the ones in which the beefy Wolverine dispatches baddies -- they're like operatic honky-tonk, big and impressive but pleasingly rough around the edges. And there are numerous stunning effects that unfold before us unexpectedly; they intensify the appeal of the actors without crowding it.

In one sequence, Mystique, disguised as a luscious human beauty perched on a bar stool, lures a poor working stiff into the men's room and has her way with him. She then turns back into her regular blue self -- her dress opens around her, flaring out like an iris, and molds back onto her body in a fluid ripple of scales. And in one of the movie's most pleasing fillips, Iceman (who, despite his superpowers, is really just a nice, average mutant kid named Bobby) blows onto a warm soft-drink bottle that Wolverine has just popped open, enveloping it in a fuzzy coat of frost.

In between all the cool stuff, Singer and his writers (Michael Dougherty and Dan Harris, working from a story by Singer, David Hayter and Zak Penn) toss in all the requisite X-Men stuff about honor, reluctant heroism and (most significantly) the hardship of being outsiders. Those are the ideas that the X-Men comics, created by Stan Lee and Jack Kirby, have been built on, and they're what has made them so enduring and well-loved.

But in "X2" those themes too often take a back seat to the action. At one point Nightcrawler, who is meeting Mystique for the first time, asks her, "Why not stay in disguise all the time? Look like someone else?" To which she replies, hardly enigmatically, "Because we shouldn't have to." The exchange is lovely, even though it comes off a little like an author's message -- a reminder to the audience to sit up and pay attention, because this movie is really about something more than just kicking lots of ass. And yet, "X2" seems to be mostly about kicking ass. There's nothing exactly wrong with that; it's simply that, well executed as "X2" is, it just doesn't have the same resonant ring as its predecessor.

The fun of watching "X2" lies in hopscotching from moment to moment, awaiting the clever little touches Singer throws in our path. McKellen is a nasty delight here: He deliciously camps up his lines, as when, reunited with Rogue (whom he'd kidnapped for his own nefarious purposes in the last installment, terrifying her so much that the experience left a streak of white in her hair), he makes note of her Susan Sontag do and deadpans, "We love what you've done with your hair!" There's also a terrific moment in which Magneto steps onto a small, flying spot that swoops through the air -- he rides it, standing erect with his arms folded and every strand of his wavy gray hair in place, as if it were a miniature motorized surfboard.

There are some fleeting bits of visual poetry in "X2," particularly a sequence in which a baddie, after being injected with molten metal, cries leaden tears (they roll out in shiny-drab rivulets). And three characters in particular give you just about anything you could ever want out of a cartoon action movie. The mere sight of Anna Paquin as Rogue is touching. She's a girl for whom the pleasure of physical intimacy is impossible, and so she wraps herself up in scarves and fitted bodices, like the heroine of some mournful Victorian Gothic. She tends to wear trim, low-cut tops that emphasize her womanly sexuality, but she has to accessorize them with elbow-length gloves that protect the world from her deadly fingertips: Her get-ups say "Look but don't touch," not because of some confused adolescent prudishness, but because her conscientiousness about harming anyone she might come into contact with overrules her desire for physical intimacy.

Jackman's Wolverine is a pleasure to watch, and not just because, with his ham-hock biceps, he's a potent reliquary for both homo- and heteroerotic beefcake fantasies. As Jackman plays him, Wolverine -- often seen chomping on a stogie, his hair teased up into twin points that suggest husky-dog alertness -- is a bold cartoon who nonetheless seems resolutely human. His romantic scenes with Janssen's Jean Grey are tactfully underplayed, lending the movie just the touch of sweetness it needs.

But I'm most entranced by Romijn-Stamos' Mystique, that scaly, growly blue Amazon with red hair and eyes to match. Who could love a girl like that? She's one of the borderline "bad" mutants, having aligned herself with the wily, misguided Magneto (himself a Holocaust survivor -- nothing is black and white in the world of the X-Men).

Yet Mystique, who rarely speaks, is completely arresting. Not just because her painted-on blue costume is sexy (it is), but because her silky, half-reptile, half-feline way of moving is simply hypnotic. Even the way she fends off opponents with her impossibly long toes is fascinating. Mystique slinks through "X2" with the mysterious allure of another movie anti-heroine, one from long ago: Irma Vep, the center of Louis Feuillade's silent 1915 epic "Les Vampires." Irma Vep (played by the legendary French actress Musidora) is a cross between a jewel thief and a vampire; her form-fitting black outfit, a unitard that clings to her rounded tummy and thighs, was shocking for 1915, but it works today, too, as a symbol of the mingled threat and promise of womanly sexuality.

Mystique, like Irma Vep, is all threat and promise, tiptoeing about in her various disguises, but she's most magnificent when she's simply being herself. Romijn-Stamos plays Mystique with an enviable physical confidence. Her movements are her line readings: They tell us everything we need to know about her without using anything so mundane as words. She slinks through the movie as if she were on a covert mission to sneak off with it, leaving us (not to mention its director, its writers and its other actors) blinking in disbelief and wondering, "Where did it go?" Romijn-Stamos has "X2" in her pocket. It may be the first big blockbuster of the season. But on her, it leaves nary a bulge.