How did a competition between amateur pop vocalists -- presided over by a bitchy Brit -- become an addictive delight and ratings juggernaut? 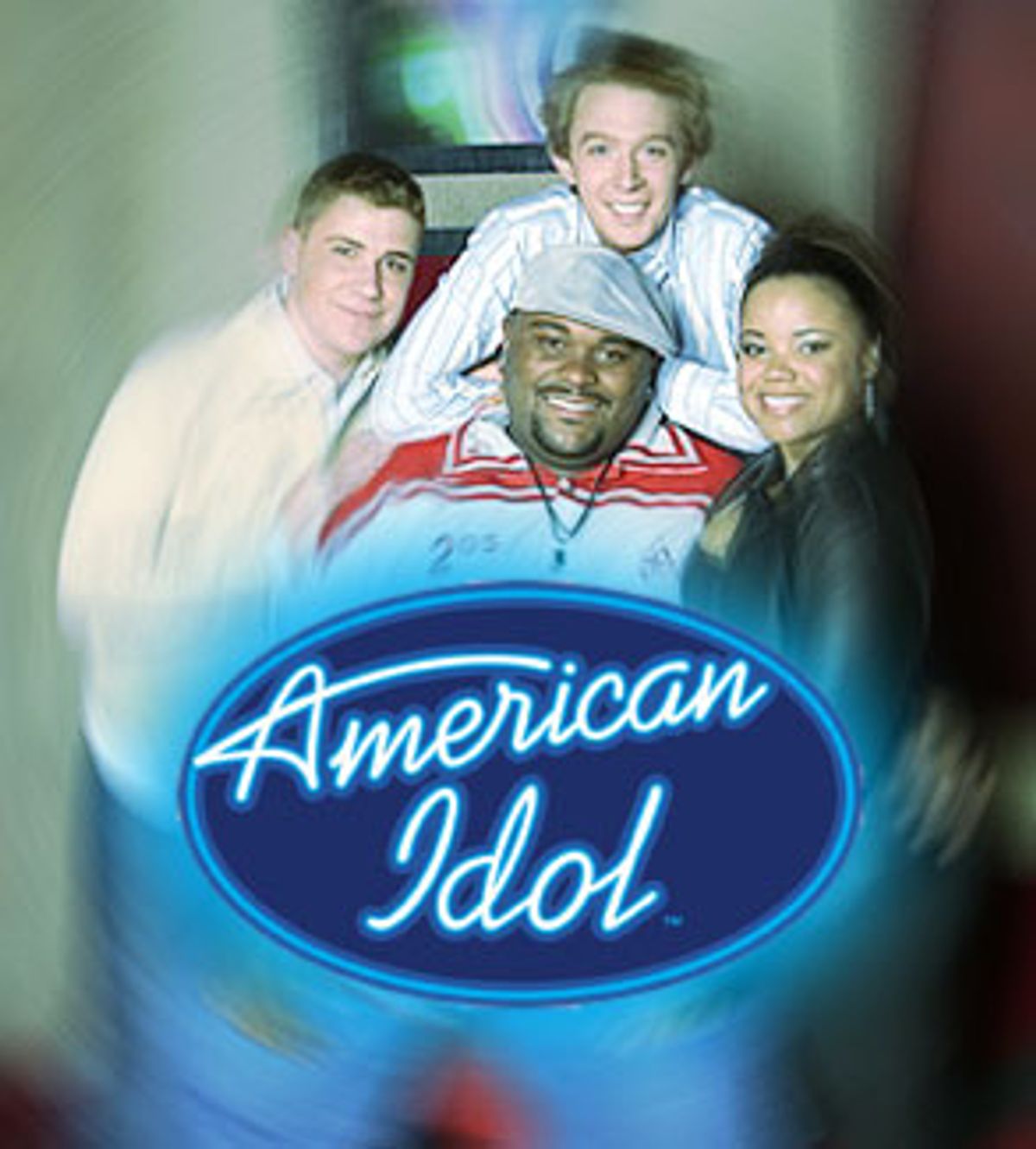 How did "American Idol" (Tuesdays at 8 p.m., and Wednesdays at 8:30 p.m., on Fox), a goofy vocal competition marking time in last summer's schedule, become the fourth most popular show on television? Not only does the show regularly win its biweekly time slots, it gives "24," "Bernie Mac" and "Wanda at Large" major boosts such that Fox regularly wins both Tuesday and Wednesday nights in overall viewers, a feat that would have seemed unthinkable even a year ago. "American Idol" isn't just a popular show; it's a juggernaut that has transformed the networks' competitive landscape.

Not surprisingly, "American Idol" has replaced "Survivor" as the show most likely to be discussed by the water cooler. Still, describing the show's appeal to those who don't watch it is nearly impossible. "Isn't it just a talent show where the judges pick on people?" they ask, incredulously. "It looks so cheesy."

And "American Idol" is so cheesy, although this season is nothing compared to the first. Back then, Seacrest shared hosting duties with Brian Dunkelman, aka the "Beaker" of on-air talent, and the show was so clumsy and idiotic that it was almost unbearable to watch. The two bed-headed hosts were meant to play off each other's zaniness nonstop, but they mostly just threw each other off, then desperately tried to make up for it with more goofiness. Each week they got worse, walking stiffly, shoulder to shoulder, while delivering painfully dorky lines into the camera and grimacing through a series of "Three's Company"-level "You did not just say that!" and "Can you believe this guy?!" expressions, the sort of overly theatrical shtick that would make Casey Kasem blush.

But in spite of the ridiculous hosts and those endless "Ford Focus" spots that seemed to take their cue from Mentos commercials, the competition between the best performers heated up. Tamyra Gray, arguably the most talented and dynamic performer of the group, gave one breathtaking performance after another, but was prematurely dismissed by the American public while the far less talented Nikki McKibbin struggled all the way to the final three.

Nothing fuels water cooler banter quite like a whiff of injustice. Struggling to predict which performer America would embrace or shun became the new game surrounding "American Idol," one more heated and open to debate than any discussion of talent could be. Thus, this season, despite the sheer boredom of watching a bunch of fairly talented but not all that interesting kids sing cloyingly sweet ballads and absurdly dorky disco tunes, despite the cheering families and horny fans holding signs like "I'm Aiken for Clay," despite the amateur outfits and the press-on nails and the melodramatic gestures, "American Idol" has become a TV event that a lot of Americans don't want to miss.

As "American Idol" has evolved from badly produced show to addictive spectacle, snippy judge Simon Cowell has to take a lot of the credit. Those unfamiliar with the show are likely to claim that he's just another needlessly provocative judge, someone who wins attention with his relentlessly negative comments. The truth is that, given the unpredictable, unaccountable nature of "American Idol" voters' tastes, the show's structure creates a thirst for justice that only Cowell's opinions can satiate.

In the early stages of the competition, of course, Cowell, Paula Abdul and Randy Jackson are all needlessly unkind. As hilariously awful as some of the young hopefuls might be, it's tough to see any point in crushing their dreams just for the thrill of finding a creative way to say "You suck." These kids have already agreed to be taped -- it's not as if those watching at home can't chuckle and elbow each other all they want. The part where Cowell says, "Stop! Stop! It hurts!" isn't just cruel, it's redundant.

Later in the program, though, many somewhat talented young people who have proven themselves to be incredibly bad performers get voted back, week after week, usually because they hit some key "American Idol"-watching demographic: teenagers who like pink hair, say, or red-blooded Americans who weep openly when they see a young Marine take the stage and sing, even if he sings an unspeakably crappy version of "Celebration."

This is when the sense of injustice sets in. There are just five performers left, and some are inspired and awe-inducing while others look like they're in pain, singing off-key and fumbling their way through moves that a high school swing choir wouldn't touch with a 10-foot pole. How did Ruben Studdard, who has a beautiful voice and completely inhabits each song, end up in the bottom two last week while Josh Gracin, a kid with the talent and charisma of a throw pillow, didn't? Is it racism, bad taste or some combination of the two?

No matter. This is Simon Cowell's time to shine.

"You looked dead. You were like fish on the slab."

"You need to lose a few pounds. All I'm saying is, I would just work out a bit more."

"Nice looking boy, should be in a boy band, not a star."

"It was a bit small-bar Las Vegas."

"When you started to sing, the first thing that went through my mind was: You sound like someone who should be singing on a cruise ship. And then halfway through the song, I imagined the ship sinking."

Of course, it's even better when the contestants talk back, as they often do in the earlier rounds. Inevitably it's the least talented of the lot who get angry and defensive.

Simon: "That was not good."

Juanita: "It was not good?"

Juanita: "How didn't it suit my voice?"

Simon: "Because you sang it."

It's easy to mistake Cowell for a jerk, until you actually care about whether or not your favorite performer advances. At that point, you're mostly egging Cowell on to pound home the truth loud enough that even the most deluded viewers will hear it.

Comedically, it's nice that fellow judges Jackson and Abdul offer the self-consciously positive assessments that provide the setup for so many of Cowell's punch lines. But after watching the show for a while, even their comments begin to seem ruthless -- you just have to translate them into English.

Paulaspeak: "You did your thing."

Randyspeak: "Were you a little nervous?"

Translation: "Get off the stage."

And as tasteless as the relentless "I'm not gay, you're gay!" banter between Seacrest and Cowell may be, there are plenty of great moments between the host and the judges. These guys aren't exactly rocket scientists, but without Dunkelman around to make everyone feel dirty, they manage to be fairly spontaneous and weird on a regular basis. And most of all, thanks again to Cowell's nonchalant, arrogant provocation, everyone seems to be having a good time.

Simon: "What were you doing up there?"

Sylvia: "I was feeling my song."

Simon: "You were feeling your thong?"

Ultimately, then, it doesn't matter if Ruben Studdard is eliminated prematurely, Tamyra Gray-style. It doesn't matter if Josh Gracin shakes his fist to the top like a second-rate Garth Brooks. It doesn't matter if show-tunes choir geek Clay Aiken continues to undergo an extreme makeover, getting his ears pinned back and his hair mussed up and drinking Ensure until his angel voice is packaged in a meatier Goo-Goo Doll exterior. It doesn't matter that the judges are largely powerless, that all they have left to do is bicker and banter and try desperately to influence the outcome with strongly worded reprimands. The fact that you can't account for taste, let alone the taste of most Americans, is what makes the show feel like a novelty each week. The less fair it is, the more we'll have to complain about the next day.

In the end, the only thing that's predictable about "American Idol" is that the victory will be bittersweet. Watching the Kelly Clarkson du jour weep onstage, just to churn out some insipid pop songs and star in a sure-to-be-frightening "movie" like "From Justin to Kelly" will never quite live up to the uncertain fun of the competition itself.

Until then, I'm pushing for Ruben.