"Survivor": The wrath of Rob

In its sixth season, "Survivor" travels down the Amazon and finally finds a villain worthy to fill the shoes of flabby nudist tyrant Richard Hatch. 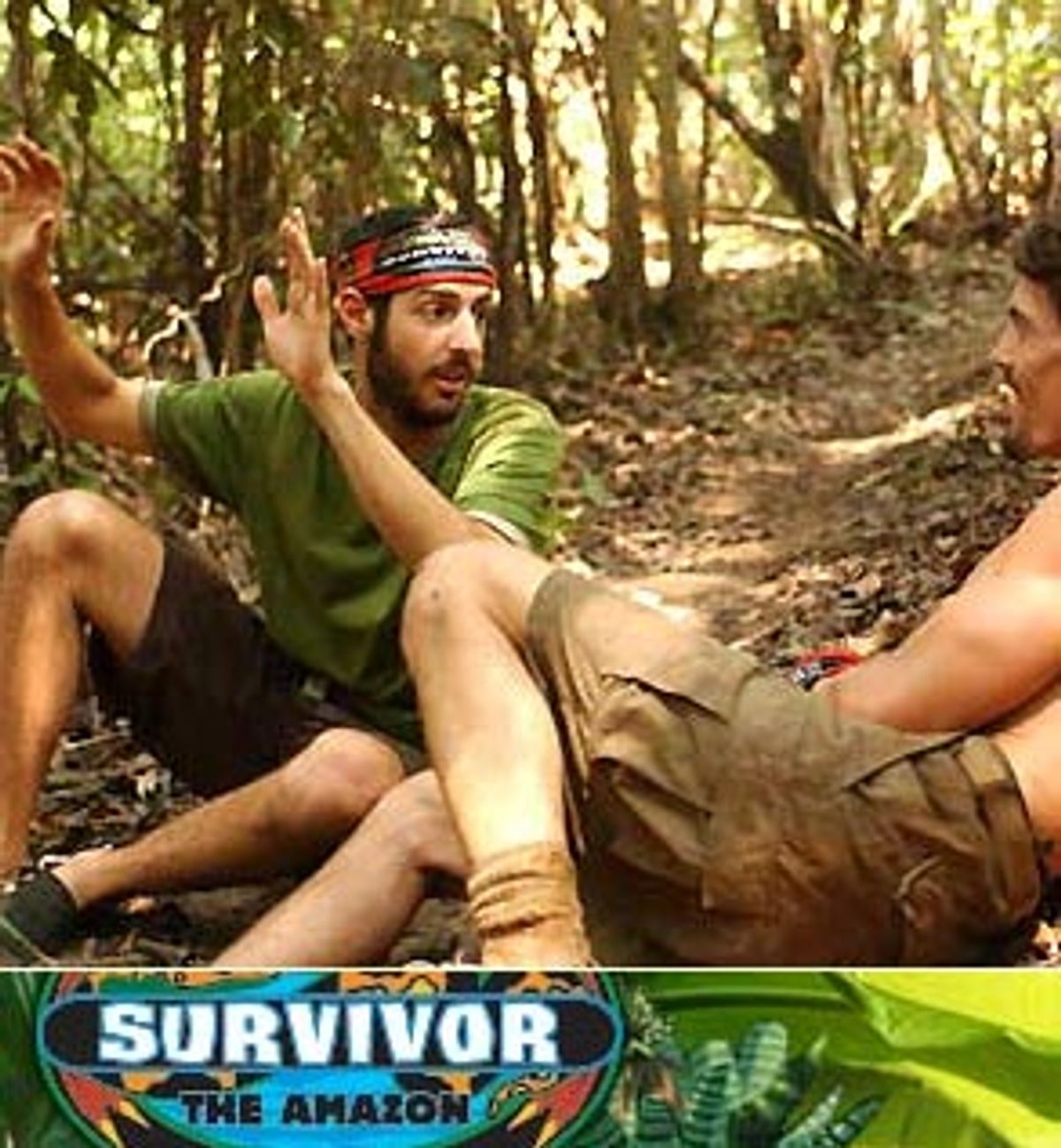 In Werner Herzog's classic art film, "Aguirre: The Wrath of God," Klaus Kinski plays a pugnacious Spanish conquistador, Don Lope de Aguirre, who, in 1561, overthrew the leader of an expedition delving the depths of the Amazon jungle in search of El Dorado, the mythical city of gold. With Aguirre in control, the group becomes fractured and paranoid, and they end up drifting helplessly down the Amazon River on a makeshift raft. As they're picked off one by one by murder, sickness and the poison arrows of Indians on the shore, Aguirre becomes increasingly enraged and delusional, driven by dreams of wealth and power. In the last unforgettable scene, Kinski roams the perimeter of his corpse-littered raft and grabs a squealing monkey to confide his glassy-eyed plans to conquer the world with his daughter, who is already dead. "Together, we shall rule the entire continent. We'll endure. I am the wrath of God. Who else is with me?"

When CBS announced that the sixth season of "Survivor" would be set in the Amazon, the image of a wild-eyed Kinski, scheming until the bitter end, leapt to mind. But would "Survivor: The Amazon" mirror such a descent into madness and depravity? A girl can dream, can't she?

Judging from the last four seasons of "Survivor," my dreams were as delusional as the conquistador's relentless quest for El Dorado. Disturbingly dull contestants and unshakable alliances led to one disappointing season after another, with winners as painfully unworthy as Vecepia the Intolerable, who seemed to win by accident, and Brian the Sleazy, who won by surrounding himself with cretins even more dimwitted and distasteful than he was. While one can hardly fault Tina for riding to victory on Colby's toothy cowboy charms, she wasn't exactly deserving of the big prize. Even when the deserving and likable Ethan won, it was sort of a drag that he still had next to nothing to say. After Rosie O'Donnell simultaneously demeaned herself and "Survivor" loyalists everywhere by squealing and grunting her way through her hosting duties, culminating in a dorky singalong that lent the fourth season's finale all the sophistication of an episode of "Captain Kangaroo," many of us were ready to write off "Survivor" entirely.

The start of this season certainly didn't look promising. The leaden "girls vs. boys" theme, paired with the traumatic memories of a mind-bendingly dull fifth season, seemed destined to bury the franchise completely.

And then there was Rob.

Rob Cesternino has single-handedly saved "Survivor" and made all of my dreams of Aguirre-style manipulation, power struggles and delusions of grandeur come true. "But is there paranoia and hand-wringing?" you're wondering. "Is there relentless scheming and ruthless one-upmanship? Are there unpredictable, ever shifting alliances and petty grievances and enraged, spitty outbursts?" You have to stop yourself from smiling now. "I know it's too much to ask, but ... are there tearful recriminations?"

The answer is yes. All this and more are yours, thanks to one man: Rob. Rob, who has persuaded most of the players into backing him at one time or another. Rob, who, according to the official "Survivor" Web site, "wrote his college senior thesis on 'The Impact of Reality Television' and received an A." Thanks to Rob, the spirit of "Survivor," which was crafted by the meaty hands of that smug, scheming, fish-spearing sneak, Richard Hatch, lives on!

But if you don't believe me, take it from Deena, a player whom Rob ultimately crossed. In a chat on the CBS site, she stated, "I wasn't shocked at anything Rob said or did. He is playing this game the way that it should be played: two-faced and ready to change teams at any time. I like him a lot."

She may be the only one. Rob has drawn everyone in, confiding in each of them with his "Who me?" chumpy demeanor, while providing a scathing play-by-play for the camera, along with countless observations, snide comments and harsh jokes. So far, Rob has manipulated even his worst enemy Matthew into doing his bidding, and like a true leader, he's delegated Matthew to prompt clueless Butch into voting with them. Best of all, he created an alliance with the popular kids and then summarily dumped their chosen son, which enraged the long-legged duo, Jenna and Heidi. The two had it coming, of course. After being sickeningly coy and arrogant and lazy for weeks, they had the audacity to play the role of shocked, deeply offended victims the second their little Self-Love Boat sank.

Jenna: "I felt betrayed more than I've ever felt in my life. Rob screwed the alliance. He betrayed me and Heidi, he betrayed Alex."

Heidi: "I didn't think that people would sacrifice personal relationships with a gamble."

There's nothing quite like the sanctimony of hot chicks who whip their tops off for attention and chocolate, lie around the camp without lending a hand, rarely bother even to glance at deaf girl Christy, then whine with impunity when the shit hits the fan.

Heidi (through tears): "I've never felt so manipulated, cheated and hurt, all at the same time, in my entire life!"

Jenna: "He's a snake. Everybody's gonna know that, and it's embarrassing, I would be embarrassed to know him, because he's such a slimeball. I have morals, I have ethics, he has none, and that's why I don't want to go along with his crappy plan."

Rob: "Now, with the two girls, it's kinda like I'm hanging out with two ex-girlfriends at the same time that both hate me."

Boy, it sure sounds like Rob's going to get his comeuppance, doesn't it? Think again. Christy is wishy-washy about whether she'll align herself with Jenna and Heidi, whom she dislikes intensely but who might offer her a better chance at making it to the top three. When Rob realizes he can't count on Christy, who does he turn to? Heidi and Jenna, who, despite their countless moral objections, quickly take him up on his offer and vote Christy off instead. Never one to give himself an undue amount of credit, Rob is beside himself at how easy it was to turn the tide.

Rob: "This is really crazy stuff going on. I can't believe I'm back in Jenna and Heidi's good graces."

Before the vote, Christy is absurdly confident.

Christy: "Honestly, right now I think that I am in the driver's seat. I make the final decision."

Cut to Christy, getting voted off. Does she turn her rage on Rob? No, sir.

Christy: "I'm so pissed off! I didn't deserve to be voted out! I'm gonna make sure those freaking evil stepsisters of mine are not gonna win the million dollars!"

Meanwhile, Rob can't keep himself from grinning whenever someone new is voted off, mostly because he single-handedly masterminded each downfall.

But the best moments arrive when Rob snipes openly at the others in the group. Take, for example, Jenna's complaints to Jeff Probst about the hardships of being beautiful.

Jenna: "I'm judged all the time by just ... outside looks. I mean, I don't think that women take to me very well, I mean, 'You're a stupid model, you can't hack it.' So I've felt like I've had to work twice as hard to get here, and I think Heidi feels the same."

Jeff: "Rob, have you had to work harder?"

Rob: "Well, I was lucky in this game, that I was not handsome. So I didn't have any uh, handicaps like the girls..."

On Thursday night's episode, the last before the finale, everyone seems to be doing themselves in except for Rob. Clueless Butch packs firewood around the shelter, the group leaves a fire burning, and (surprise!) the whole thing burns down, along with everyone's stuff. Jenna laments that her pledge crown and her Zeta sorority jacket (which is irreplaceable, see, because it's passed down from sister to sister) have been destroyed. Then she and Heidi lie around some more while everyone else is working. Later, Jenna cries and says she can't take another day of lying around while everyone else is working. Heidi openly urges the group to vote Jenna off, while patting herself on the back for being such a generous, warm-hearted soul, as is becoming her habit. Matthew dominates both challenges, winning a car and immunity, but makes the mistake of appearing to be more of a threat than ever. Rob's sense of humor is, as always, intact.

Rob: "I really am very happy for Matthew. I'm very happy that he got to win the car. And I asked him, if he ever goes to Asia, or if he ever returns to the planet that he came from, he says I can borrow it, and go cruising for chicks."

Before the vote, Heidi is absurdly confident.

Heidi: "I'm like the mastermind behind half of the plans that go on day to day, and I've got three guys here that are scared to death of me."

Rob and Matthew exchange bemused looks. Members of the jury roll their eyes; one of them covers his face in disbelief.

Cut to Heidi, getting voted off. Does she turn her rage on Rob? No, she's too busy complimenting herself.

But let's go ahead and give Rob credit for Heidi's grandiose behavior while we're at it. After all, the beauty of a player like Rob is that he brings out the worst in everyone. Just as Aguirre's puppet leader, Guzman, became increasingly haughty, wielding his privileges until he was murdered by his underlings, so did Rob's puppeteering bring out the popular-girl sense of entitlement and babyish foot-stomping in Jenna and Heidi. The pair would never have vacillated between such extremes of arrogant and desperate behavior had they not been handed a false sense of power by Rob, only to have him snatch it away again. Their outrage at losing power is clear: How did this little dork pull one over on us? Rob follows in slippery Richard Hatch's shoes here, as well -- that thrillingly vitriolic showdown between Susan Hawk and Kelly Wiglesworth during the first season's finale would have been impossible without Rich egging them on.

Doubtless there are those who hated Richard Hatch, and who will claim that Rob is "too mean" or that he's "irritating" or "annoying" or "just a sniveling little horndog." And they're right, but they also may be describing the ideal survivor. Because, just as Aguirre's ill-fated trek into the dark corners of the jungle brought out some demonic force within him, so "Survivor" unearths the ugly underbelly of human behavior that emerges when a lot of wealth is at stake. Some might scoff at the ugliness they see, but the game really is about courting the shadow. When people are hungry and they can't trust each other, a drama will inevitably unfold, and whether it's an art film or a well-crafted reality show, it's fascinating to witness.

In the end, thanks to Jenna's surprise win of two immunity challenges in a row, Rob didn't even make it into the final two -- even though both Matthew and Jenna admitted that he deserved to. After all, he was by far the most charismatic, the most conniving and the most intimidating. Call it the Aguirre Principle. Maybe it's sick, but it has more than a little in common with American politics.

The truth is, CBS should give Rob a million bucks for reviving the franchise and making this, by far, the best episode of "Survivor" to date.

Who else is with me?