I survived the terror of New York's kitty gatekeepers!

All I wanted was to pick up a kitten at a shelter. Then a harsh light shone in my face and the trick questions about clumping litter began. 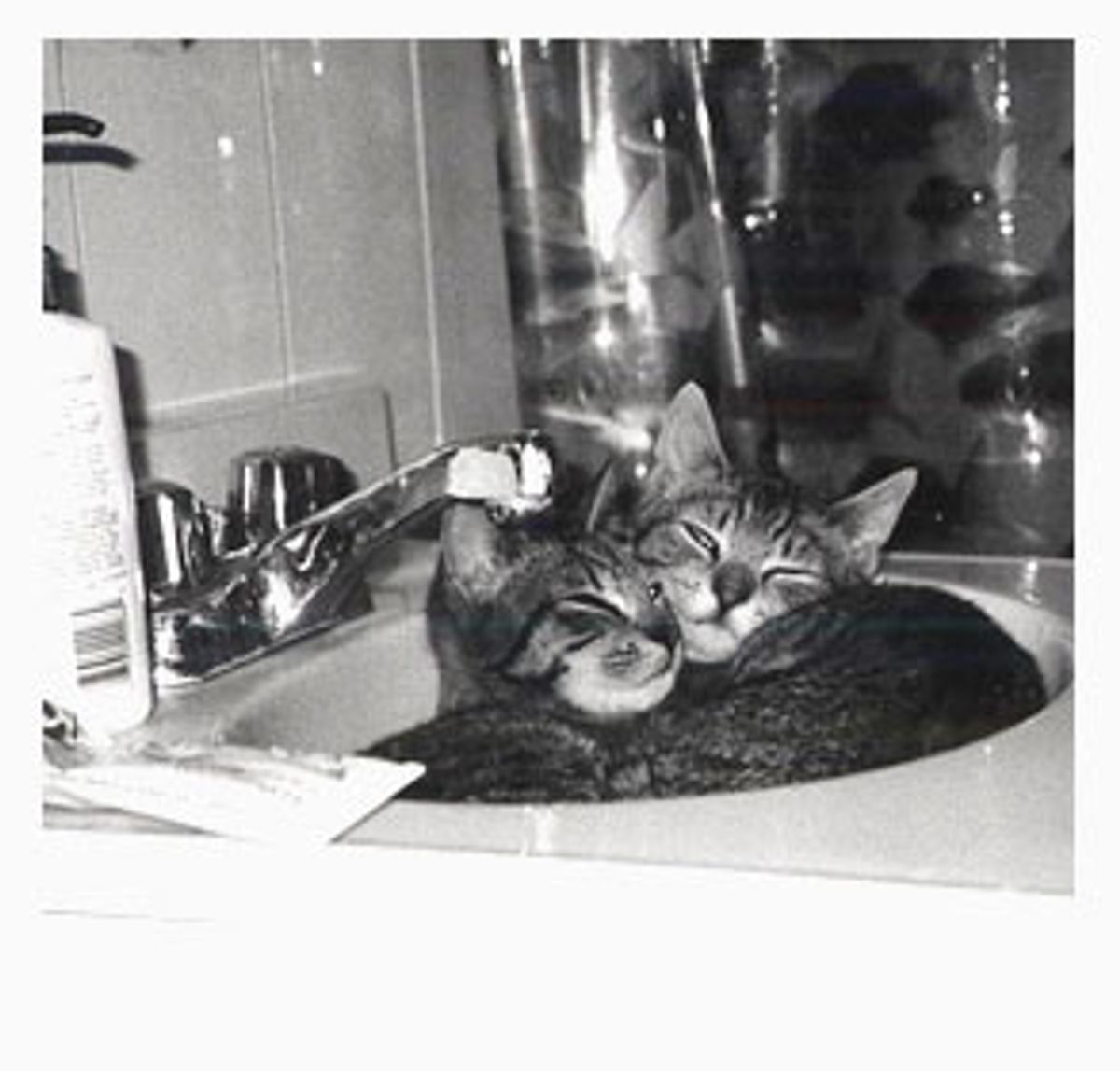 Everything was going well until the kitty litter question.

We had been in the Petco for hours. Many hours. Enough hours that people began assuming my girlfriend and I were volunteers at KittyKind, the no-kill cat shelter that sets up camp in the massive pet store found on the northwest corner of New York City's Union Square. But we weren't volunteers -- we were just another decent, underemployed American couple trying to create a life together in a cramped apartment in the Lower East Side. And while we generally enjoyed that life, we knew it wouldn't be complete without the pitter-pat of little feet in our hall and on our heads in the middle of the night, fur all over our chic black wardrobe, and a litter box stashed in the shower.

I've been a cat owner for almost three decades. But as I walked into the Petco I realized that I've never actually gone shopping for one. My sister -- defying the no-pets clause my father put in our parents' marriage contract -- secured my family's first cat for a dollar at a school fair when she was in first grade. Pee Wee was a tough little dude until a mysterious fertilizer incident did him in. Next up: Daiquiri, a fancy indoor cat who arrived one happy afternoon, only to meet his demise in a freak flea bath accident shortly thereafter. A quiet period ended a few years later when I moved into an apartment in San Francisco where Woody was squatting. He was sweet and just a little crazy, so I kept him moving around with me for 12 years. I thought I had a pretty good handle on the cat world. Entering the matrix of KittyKind, it was apparent I did not. These people were different.

I quickly learned that it takes a special type of cat lover to volunteer at a no-kill shelter. They give up their time to hang out with cats that turn up sick, abused, unwanted or worse. A good day is when one of them traps a feral cat in a vacant parking lot and brings it in to be neutered. And at the end of the day, every cat needs to be shuttled off to the home where it's being boarded. Yes, boarded -- like little, furry exchange students.

These people are cat-obsessed, but then again so are we. In the months preceding the death of Woody -- one of the all-time great cats -- we found out to what lengths feline love would take us.

On Sept. 12, 2001, with the city reeling and acrid smoke hanging over our neighborhood, Woody got sick. Maybe it was all that gunk in the air in lower Manhattan, maybe he was entering month 11 of life nine, but all I know is that from 9/12/01 one previously perfect cat started throwing up like a freshman at a frat party. After numerous visits with our local, beloved vet, we decided that we needed to step things up a notch. Consulting New York magazine's much-mocked (until now) "Best NYC Vets" article, we located not just the best cat doctor, but the finest feline gastrointestinal expert in all of Manhattan. We had crossed over from garden-variety pet ownership into another realm: We had Jumped the Paw.

Dr. Evelyn Han was located in a sprawling animal hospital in the Upper East Side. The waiting room was a constant source of amusement, trauma and drama. Where else, after all, do you hear people trading stories about their cats' experience with dialysis? People would give us their phone numbers, begging us to keep them up to date on Woody's progress. The owner of the largest dog I have ever seen cheerfully explained to a terrified cat owner that the pooch was lunging at her equally terrified cat "because he loves cats -- we have two at home." Entire families sat nervously awaiting word on their Chihuahua. Here was a place where you could witness complete interspecies devotion. Turn on a digital video camera and you'd have a top-rated reality TV show, the waiting room for Emergency Vets on Discovery's Animal Planet.

Keep taking your cat in for more tests and emergency midnight hydration treatments and you have a bill that could feed a large family of Kurds. And in our case, you also have a dead cat. Dr. Han sent us a kind sympathy card adorned with line drawings of kittens. Woody ended up three feet under in the makeshift pet cemetery in my folks' backyard. A period of mourning began.

That period ended in KittyKind's corner of Petco, where a world of hopeful cats stacked neatly in metal cages awaited us. Each cat has a little index card with its name and other notable facts. "Monroe likes Whiskers dry food and bits of salmon." "Heather thinks the best place to bathe herself is in your lap." "Pierre may seem prickly at first, but once he gets to know you, this furry friend won't leave your side." "This gorgeous girl Regina Revidus (the Queen reborn) would rather be strutting her stuff on the runway, but will be a stylish addition to your life (note: she does not do well with other cats.") "Jimmy is five years old and has an extra toe."

On weekends, the place is packed with singles and couples, kids and parents, the young and the old, all looking to add a little fur to their lives. It all seems simple enough. There are lots of people standing around talking in little cat voices; there are lots of cats hoping to bust out of their cages. Supply. Demand.

What's standing between that 3-by-3 cage and cat vomit all over your carpet? The volunteers. And when it comes to the pussy, they ain't playing.

The volunteers can be divided into four classifications:

Alpha volunteers: The diehards. They run things. They rescue and name the cats (though some alphas find naming the cats sort of wrong because it pre-assigns a name, look, feel, and, naturally, personality to the cats). They decide who gets what cat and later deliver that cat to your home. They are all women.

Beta volunteers: They do some of the above, but with somewhat less intensity than the alphas. They are quick to chime in with advice -- from the best brand of dry food to organic hairball solutions. They receive birthday cards in the shape of a cat.

Zeta volunteers: They get nervous when you ask them a question, like, "Can I hold this cat," and direct you to an alpha or beta, trying their best to stay out of harm's way. They clean the cages. They hum a lot. These are exclusively gay men.

You'd think that the job of the volunteers would be -- assuming you don't look like the kind of person who would eat, torture, or molest a cat -- to move the animals along. Not so fast, Jack. First, we need to ask you a few simple questions. This is your interview.

The volunteers start with some softballs ("Q: Do you have windows without screens that the cat might jump through, careening down 30 stories to his certain death? A: No). Then it gets a little trickier (Q: How do you feel about declawing? A: Well, I did just blow $2K on a couch ... I mean, I feel it is wrong and inhumane and Alice Walker should put a stop to it"). They want to know if we'd be attentive parents. (Them: Do you work long hours? Us: No! We both lost our jobs recently! We're home all the time! No latchkey kitties here! Them: Excellent.) And then there's this:

Them: What are you thoughts on kitty litter?

Them: How do you feel about clumping?

Them: Clumping? How do you feel about the litter that clumps.

Them: Right answer. Why not?

Us: We knew that.

Get a question wrong and you're in deep doo-doo. I suspect we could get a firearm with a lot less sweat.

Linda was a 30-ish woman with a kind way who spent a good half hour wooing and cooing at Hart, an adult cat with pretty brown stripes and a great personality. Most people show up looking for kittens, so Hart had scored and he knew it. He was on his very best behavior. "My last cat died a year ago," Linda told me, "and I think he'll be great." The president of the Hart Fan Club zipped through the interview portion of her adoption, filled out some forms, and was on her way.

"I'm so glad she's taking Hart," I told an alpha a little later.

"I don't know about that," she countered. "We had her fill out an application, but she was pretty rigid about only wanting to feed him dry food. How would you like to just eat cereal all day?"

I nodded slowly. I needed the alpha on my side.

How 'bout the kittens, I wondered aloud. Who got them? There were four kittens, and they were just a few weeks old. When they weren't sleeping on top of each other like strips of bacon still in the package, they were bouncing off the walls of their cages. Everybody wanted the kittens.

"I don't think anyone is getting the kittens," said an alpha.

How was that possible? This guy had too many roommates. That girl seemed immature. One couple had too many cats already.

"But," the alpha added without a hint of irony, "a mature couple like yourself would do well with the kittens." Great, we were the old guys at the rock concert. Except the rock concert was a cat shelter.

Later, I spied a young English couple and their two boys playing with a different set of kittens, a little older than the newborns, so I figured they had a chance. Mom was zippy and chipper. Dad was slumped in a seat in a leather jacket with a "No Blood for Oil" button, looking a little tired, disheveled and worried.

"Kittens and children are not always a good idea," said an alpha.

"Well, the woman nervously explained, "they have friends with kittens and they've done very well."

"There's a big difference between a supervised interaction and actually living with them."

The couple was terrified.

I had to help. When the alpha stepped away, I leaned in and told Mom about the clumping question. Her boys were shouting possible kitten names and picking out Play 'n Paw toys from across the aisle. She was grateful, giving me a little wink when the alpha asked her about litter. The Brits scored the kittens.

Three visits, eight hours, $175, one 25-minute conversation about the miracle of making cat food from scratch, 126 individual conversations with 42 cats in 3-by-3 cages and one home visit, and we scored too. Wayne and the Lady Bunny -- amazing siblings born four months earlier in the mean streets of Brooklyn during the worst winter in years under threat of Code Orange -- were home.

Now if they would just come out from under the bed.