A group of Iranian Kurds, who endured more than 20 years in a squalid Iraq refugee camp, are now squatting in a no man's land on the Jordanian border -- and threatening mass suicide if they are not resettled. 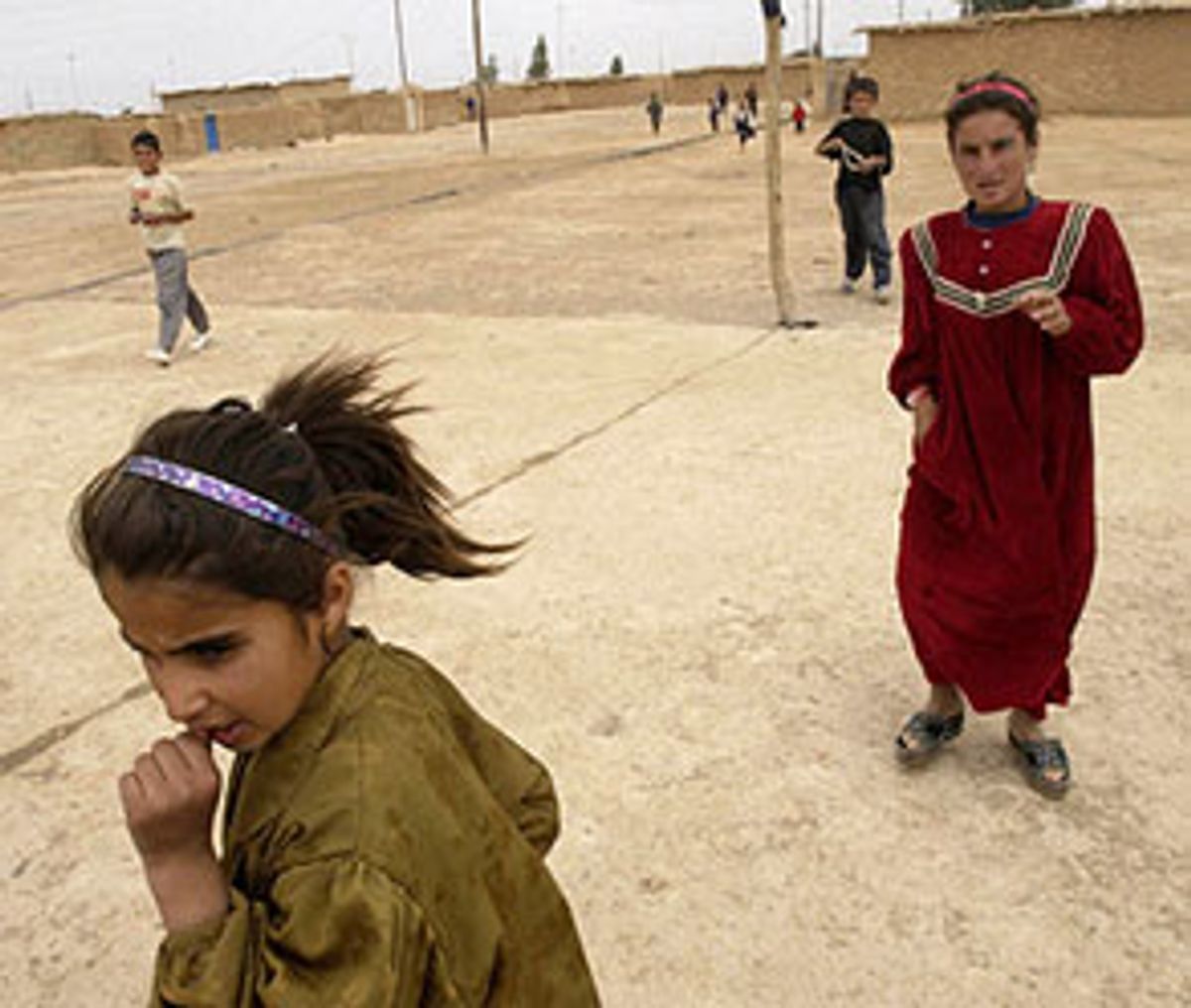 For the past month, more than 1,000 Iranian Kurds have lived in tents beside the highway on the stretch of land between the Jordan and Iraqi borders. It's a distinctly inhospitable place, a flat, scorched patch of desert visited frequently by blinding sandstorms and infested with scorpions and poisonous snakes.

The Kurds here are refugees twice over: They fled Iran for Iraq after the revolution, then ran from Iraq after violence engulfed the country in the wake of war. Now, despite efforts and edicts designed to remove them, they are unwilling to move unless their next home is safe, stable -- and many miles from the places they have suffered.

Jordan won't allow the Iranian Kurds over the border, and they refuse to return to Iraq. The humanitarian agency CARE has set up a makeshift camp for the Kurds, but a desolate way station is not what these refugees have come here to demand. The people living in this no man's land say they feel utterly forsaken, and there is talk in the camp of hunger strikes and mass suicides. But there is hope as well as desperation in their migration.

In Iraq, they say, no one knew they existed, but now their camp is within view of all the cars going back and forth from Amman to Baghdad, many of them full of journalists. Every day from morning until 1 p.m., the men of the camp sit by the road with signs begging for help, hoping to be noticed. By occupying this barren patch, the refugees nurture the heartbreaking conviction that if they can just grab a moment of the world's attention, people will be moved to help them.

"We're very hopeful. Here everyone can hear our voice all over the world. In [Iraq], not anyone can hear our voice," says Manzar, a pretty 25-year-old in a pink dress and a white and brown scarf. Jamala, a 34-year-old woman with a long, elegant face framed by a black beaded scarf, urges her 4-year-old son to offer a handful of fake flowers. They are fervently grateful to be visited by a reporter. "I hope you can help our future," she says. "Don't let my baby's future become like mine."

The desperate energy in these people's hope has CARE project manager Carsten Voelz worried. All day long, he says, the men of the camp meet to recite their sufferings and rehearse their plans. Voelz fears that as the refugees obsess about their misery, a dangerous group dynamic is developing that might lead them to act on their talk of suicide.

The Kurds say they've barely been living since they were forced into exile in 1980, during the first year of the Iran-Iraq war. Most of them were civilians living in the Iranian border areas occupied by Iraq in the war. They say Iranian bombs drove them into Iraq's interior. Others were members of anti-Khomeini political parties who arrived in Iraq to escape government repression.

In 1982, the Iraqi government rounded up the Iranian Kurds and put them in the al-Tash refugee camp, 150 kilometers west of Baghdad, near the town of al-Ramadi, which, until the war, was administered by the United Nations High Commission on Refugees (UNHCR). First they lived in tents, but when those were destroyed by the wind, the Kurds built mud houses. The al-Tash Kurds say they didn't have access to jobs or higher education. By the beginning of 2003, they numbered 12,000.

Although they say they had little contact with other Kurdish communities in Iraq, the Iranian Kurds say they suffered reprisals for Iraqi Kurdish uprisings. Forty-year-old Malek Mohamed carries a worn piece of lined paper in his pocket with the names of 13 people from al-Tash, and the dates when they disappeared after leaving the camp on ordinary errands. The refugees believe they were kidnapped and killed by Saddam Hussein's regime.

"Just because we are Kurds, they want to take revenge on us," says Tharwat, a lanky 21-year-old with a hooked nose and gaunt face. He acts as a translator for the six camp elders who sit in a circle in a tan tent and recount their travails over cups of sweet tea.

With the start of war, Tharwat says, things at the camp got worse. More than a month before the American bombing began, UNHCR's staff was evacuated and the Iraqi police who guarded the refugees stopped coming to work, so they were left to fend for themselves. First, they say, the Iraqi military came and hid weapons in the camp. Then, once the military had crumbled, armed gangs beat and robbed them.

When the Iranian-backed Badr brigade, the army of Ayatollah Mohammed Baqir Al Hakim, entered the country in mid-April, the refugees, longtime enemies of the Iranian regime, grew convinced they were coming for them. Meanwhile, according to Human Rights Watch, which visited al-Tash on April 27, the camp's food supplies are running low and there was no electricity or running water. "The water we drank from, you wouldn't expect any human can drink from this water," says Tharwat.

On April 14, the first 600 people fled for the border, with others following that week. According to Voelz, up to 30 people are arriving every day. Three weeks ago, he says, 500 Kurds from al-Tash arrived at the Syrian border, but were turned away and haven't been heard from since. Even if they don't manage to reunite with the others, the camp will have to expand to accommodate other refugees who keep trickling in.

The Kurds are clear about their purpose: They are looking for more than just clean food and water. Instead, they have issued something like an ultimatum -- with a potentially deadly outcome. Even if UNHCR reconstructs the al-Tash camp, the refugees in no man's land say they're not going back.

"For 23 years, we've suffered in al-Tash camp," Tharwat says on behalf of the camp's elders. "We ask not for bread, but just to be saved from this life."

Talk of deliverance is so fervent in the camp that it feels almost religious. The older men speak of this as a "time of darkness," while the younger people embroider their desperation on everything they touch. Nozad Husseini, 26, is an artist who draws pencil portraits that look like photographs. He shows me a pendant he made by using a drill bit to carve elegant Persian script into a flat plastic diamond. It says, "Why is there no one to hear our voice and save us?"

In the al-Tash camp, some of the women earned extra money by selling homemade beaded handbags. Husseini's sister Sarah, a tiny, lively 20-year-old in a green dress and black head scarf, takes out one she made. There's a reindeer on it, and the word "gift," but across the top is the plea, sewn in plastic beads, "Please Help Us."

Right now, there's no help in sight. The Jordanian government insists that Iraq has already given them asylum. Though the land where the refugees staying isn't in Jordan proper, the Jordanian government claims jurisdiction over it, and it says the camp is not a camp at all, but a "transit area." The government is unwilling to sanction anything that would increase the place's permanence. Thus CARE isn't allowed to provide even the basic amenities it usually erects at refugee camps, such as primary school education and playgrounds. A small group of boys kick a soccer ball around in the dust, but most people have nothing save survival to occupy them.

Sten Bronee, the head of UNHCR in Amman, says it's "not an option" for the Kurds to stay in no man's land. Jordan wants UNHCR to reestablish its presence in al-Tash so the refugees can return, and is insisting they leave by mid-June. "What these people desire is resettlement in the United States and elsewhere, but that possibility has virtually been exhausted," Bronee says.

Yet Tharwat says the Kurds are ready to hold out. "We won't go back to Iraq," he says. "Twenty-three years is enough. We prefer death to going to back to Iraq."