"Leaving You: The Cultural Meaning of Suicide" by Lisa Lieberman

A new book argues that suicide can be a rational response to an intolerable world -- and says that by medicalizing suicides, we rob them of their free will. 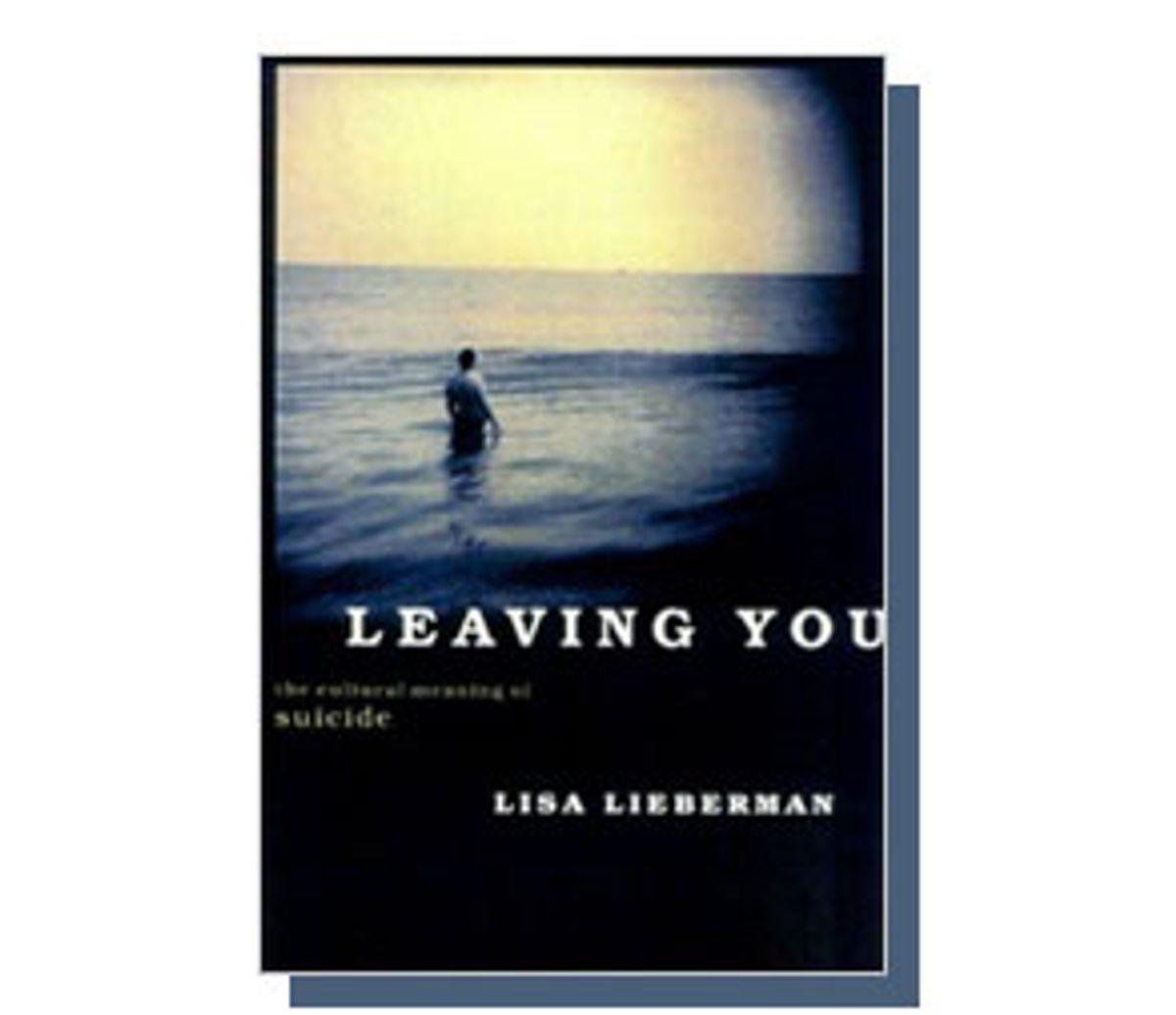 Suicide has come down in the world. In the past -- in ancient Greece and Rome, for example, or 19th century France -- it was a powerful act, a gesture that struck the world like a bell, with a peal that might ring down through the ages. Now it's the unfortunate final symptom of mental illness and neurochemical imbalance. Self-destruction was once considered tragic in the classical sense, the result of an inevitable, if not outright fated clash between the noblest aspirations of the human spirit and the limits of reality; think of Socrates or Cleopatra. Now, it's "tragic" in the newspaper sense of the word, a sad accident caused by insufficient or incorrect medication.

Is this state of affairs to be lamented? That's the question that Lisa Lieberman, an American scholar of modern European cultural and intellectual history, asks with "Leaving You: The Cultural Meaning of Suicide." Her book is a slender and elegantly written consideration of the different ways suicides and their survivors have interpreted this drastic act. Lieberman wants to argue that by defining suicide as something only done by "sick people" who "deserve compassion, not blame" and who with treatment might be cured, we are "removing morality from the equation," and with it "volition." As a result, "individuals at risk of destroying themselves [are] deprived of the right to determine their own behavior."

The right to die is something most Westerners support when it comes to people with terminal, agonizing illnesses. But Lieberman isn't just talking about preserving this right for those with AIDS or cancer; she asks whether suicide can't also be a considered, rational choice made by an individual who for one reason or another just can't go on. Can we safely assume that a physically healthy person who intends to kill himself must be out of his mind? Lieberman examines the cases of many suicides -- some famous, some obscure, some fictional, some actual -- and suspects that we can't.

Lieberman is not disinterested. Her manic-depressive mother threatened to kill herself during mood downswings, and her paternal grandfather ended his life after losing all his savings in a Depression-era bank collapse. She also worked as a volunteer on a suicide hot line, where she found that "every call was a story with a mystery at its heart: The question of why the person at the other end wanted to die." Some suicides seek nothing more than relief from intolerable emotional pain, but others also want to make some kind of point. "Melancholic or angry, cowardly or heroic: suicide is a statement that cries out to be deciphered, yet the cultural history of self-destruction consists of a series of attempts to evade this truth by depriving suicide of its broader implications."

As Lieberman points out, no one wants to admit that suicide might be more than a merely insane action because of "the disruptive potential of self-destruction, the power of individuals to use death as a weapon in order to undermine the authority of states or to bring into question the cherished values of societies and institutions." It can be "both an act of aggression and a powerful public statement," as suicide bombers demonstrate nearly every week. If suicide can have a meaning, the meaning is almost certainly a variation on "Fuck you!"

And if suicide can have a meaning, something beyond the malfunctioning of brain chemistry, then it must also have a history. It makes sense; what could be more cultural than killing yourself, the most radical violation of every biological and evolutionary mandate? Lieberman teases out this history, from the "suicide of honor" practiced by the Roman elites -- such as the Stoic philosopher Seneca, who killed himself at the command of the emperor Nero, and Brutus, who fell on his sword when the Republic was lost -- to what can only be called a suicide fad kicked off in the early 19th century after the publication of Goethe's "The Sorrows of Young Werther," the overwrought story of an artistic type who shoots himself out of unrequited love for a married woman. In between there were early Christians so eager to achieve martyrdom that church officials had to crack down and the philosophes of the French Revolution, who saw suicide as "a political act: a proud affirmation of personal freedom," in defiance of the church that had decreed it a sin.

Too much of "Leaving You" is devoted to examinations of the sort of multivolume, now-unread, sentimental novels that were all the rage during the 18th and 19th century, written by the likes of Rousseau, Madame de Staîl and George Sand. (One of the hazards of reading cultural histories is having to hear about Rousseau over and over again.) But Lieberman also dug up records on actual suicides that occurred in France during the years when those books were popular. The influence of the Romantic cult of suicide on these real people cannot be denied: "The thwarted passion that figured so prominently in the works of the Romantics was apparently perceived as the most justifiable grounds for self-destruction, judging from the predominance of the motif both in the suicides' own characterization of their plight and the ways in which their situations were described by outside observers," Lieberman writes. One young man's note read, "At 14 I knew love, at 20 I became its slave and at 24 it has driven me mad."

But, as Lieberman points out, a closer look reveals that many of these suicides were more spiteful and petulant than they were illuminated by the splendor of great passion. Before ending their lives, these (generally young) men and women took time to inform those who had wronged them -- cruel love objects, but just as often parents and guardians -- of exactly who was to blame for their pitiful fates. Lieberman, who is enjoyably uninclined to let anyone get away with anything, observes that "the dishonesty, self-pity, and sheer malice that seem so obvious to me were camouflaged, to the apparent satisfaction of the actors and actresses involved, by the Romantic language they employed."

The asperity of Lieberman's wit is particularly welcome in this territory. She explains that French officials became increasingly alarmed as the vogue for self-destruction spread from the ranks of the elite to riffraff. Describing the response to a farm laborer's suicide, she writes, "the tone of the prefect's denunciation leads me to think that the real crime, when a member of the lower class took his life, was not suicide but the inappropriate social aspirations that motivated it." Killing oneself was seen as the province of heroes, poets, the nobility -- men of honor, not peasants.

For the author of a book meant to float the notion of legitimate, rational self-destruction, though, Lieberman sets the bar pretty high. After dismissing suicide over despised love as a kind of glorified tantrum, she surveys the lives of three brilliant women who epitomize the notion of the "tragic artist": Simone Weil, Diane Arbus and Sylvia Plath. Their curtailed lives are cloaked in another kind of romanticism -- that of the creative being too sensitive and/or pure to survive in our sullied, profane world. Lieberman makes pretty short work of the mystique in each case, pegging Weil and Arbus as enmeshed in self-loathing masquerading as concern for others and Plath as a sort of connoisseur of rage and misery, not so much self-hating as competitively morbid. (After all, Plath boasted that she performed the art of dying "exceptionally well.")

And so Lieberman wends her way to the three men whose lives seem to offer the best case for what she calls "self-destruction as a meaningful gesture": the Holocaust survivors Jean Améry, Bruno Bettelheim and Primo Levi, each of whom died by his own hand. It's here that "Leaving You" gets uncharacteristically foggy. What Lieberman seems to be saying is that if anyone has a legitimate reason to reject not just humanity but life itself, it is men like these. They have seen the worst that other people can do, and the worst in themselves.

And yet Lieberman has her doubts that even a suicide in extremis -- the case of a woman inmate forced to dance for a Nazi officer before being sent to the gas chamber, who managed to seize the officer's gun and shoot him before being shot herself -- can have much meaning. Bettelheim saw this as an example of "supreme self-assertion" and the reclamation of dignity. Lieberman, who declares that "dying on your own terms is still dying," wonders if this isn't a further indication of what she considers Bettelheim's "fairy-tale presumptions" about the ability to derive "hopeful lessons from a prisoner's suicide."

She seems to put more stock in the suicidal thinking of Améry, who "said that in Auschwitz all the poetry and philosophy he used to love became worthless." This was "the loss of his humanity. The loss, that is, of everything he valued: the consolations of beauty, empathy, rationality and truth." For him, the meaning of all those things, of anything at all, vanished in the camps and he could not get it back again after the war. Who are we, or Lieberman, or anyone else, to quarrel with his assessment of his situation? This must at last be the Good Suicide.

But what Lieberman doesn't leave us with is any sense of how to grapple with the case of a garden-variety suicidal person, one who hasn't survived one of the most degrading atrocities of the 20th century. Anyone who has dealt with a suicidal loved one can testify to how terrifying and confusing it can be, and Lieberman readily acknowledges the fear, pain, grief, guilt and anger that ripple through the friends and relatives of a suicide. Suicide is a profoundly aggressive act, as she states many times, and perhaps it is also sometimes a rebellion against an unjust authority or order, a statement against the intolerability of the suicide's condition, a radical assertion of autonomy.

However, some -- surely most -- people who want to kill themselves are indeed suffering from depression. They are quite likely to see their circumstances otherwise once they recover from their disorder. Rescued suicides have described a delusional "suicidal trance" and have thanked those who thwarted their determination to kill themselves once that trance is broken. Even if we allow that some suicides are a reasonable response to a horrendous and faith-decimating life experience, others clearly are not. And, most important, some people who have endured similar experiences do not kill themselves.

Perhaps it's a moot point; it is a universal human duty to try to prevent any healthy person from self-destruction, regardless of how good that person's reasons might be. Lieberman says that by denying traumatized, exhausted persons the legitimacy of their choice to leave the world, we reduce them to "victims with no control over their own destiny," and thereby erase their dignity, much as their past tormentors did. But the alternative is to permit the destruction of a human being who might later find reason to live, and that seems the greater crime. I'm perfectly happy to allow some of the dead the dignity that Lieberman calls for, but when it comes to living, all bets are off.