What are the chances of ever finding your soul mate? A new Web site will help you calculate them, but don't say we didn't warn you. 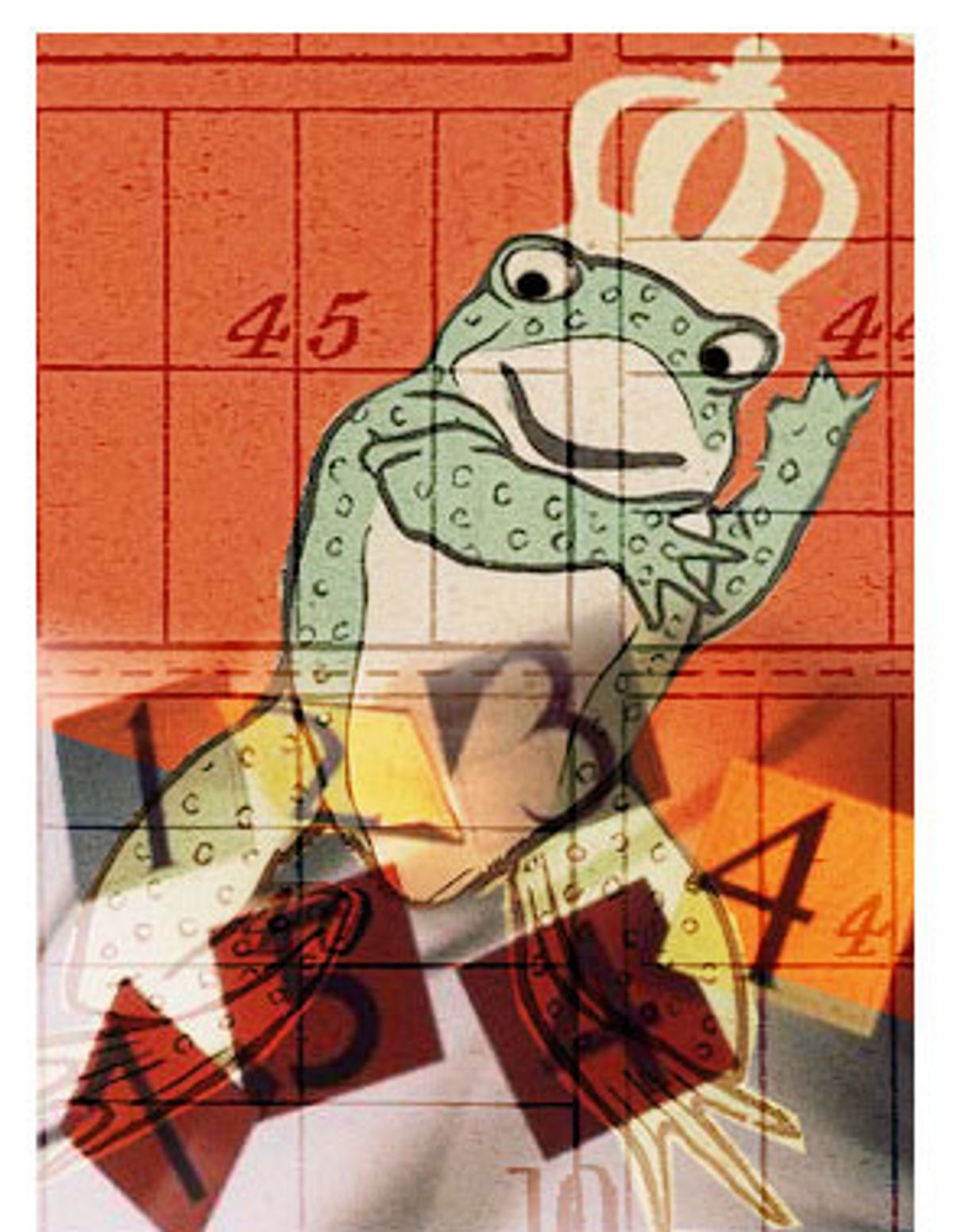 They say you have to kiss a lot of frogs. How many, exactly?

That's 26 million frogs. This veritable plague was wrought by the wrath of the Soulmate Calculator, a device on the Web that uses the latest data from the U.S. Census and the National Center for Health Statistics to compute the number of American singles you must meet to find your soul mate. You enter your preferences about gender, age, ethnicity, willingness to move, etc., plus desired percentiles of "ambition," "compassion," "attractiveness" and so forth -- and the calculator spits out your number in the deli line from hell. In my case, triple the population of New York and approximately 38,566,537 "drinks." That's sex and three cities.

Praying for the first time ever that something actually was wrong with my Macintosh, I e-mailed some friends and asked them to run their numbers.

My roommate Colin got back to me right away: "Though I am willing to move, and have a broad spiritual acceptance that includes Buddhists, Jews, Hindus, Muslims, Atheists, Agnostics, 'Spiritual,' and 'Other,' it still tells me: 'You have to meet 9,484,363 heterosexual females who are between 28 and 37 years old,'" he wrote. "Maybe this is my problem. I'd be hard pressed to say I've met more than 4 million straight women."

Kris thus changed her tack. "I will ask for absolutely nothing. Hold on," she wrote. "Aha. Result: 1. So if you have zero standards and expectations, the next guy you meet is your soulmate. Nice."

Gay men, as they do in so many things, fared better. My friend Asher was told he'd have to meet 10,949 homosexual males between 23 and 40 who live in L.A. or would be willing to move there. Asher's only caveat: "They really need to add the top/bottom question in for gay men," he wrote. "I know some people whose scores that would change dramatically."

Meanwhile, my editor claimed to want to get a head start on "fact-checking" this article. Her results, depending on her mood, ranged from 925 to 1,232. Hey! What's she got that I ain't got, besides maybe an undisclosed tolerance for 4'11" wall-eyed speed freaks?

I contacted the site's creator, Chau Vuong. "Some of us are getting answers in the kabillions. Are we doing something wrong?" I asked. "With the calculator, I mean, not our love lives?"

Vuong, 32, a poly-degreed CEO of three Orange County technology companies, said everyone's results were entirely plausible. "Your editor might be less picky when it comes to height. Most women like guys to be at least 6 feet tall. I think only a small percentage of guys are 6 feet and taller, but the media brainwashes us to believe that more men are taller than they are in the real world. Tom Cruise is really short," he explained. "In any case, with each requirement you add, the probabilities times each other, so the number of singles you need to meet grows exponentially." (I later found out my editor had left the maximum height at 8 feet. Aha. Giant wall-eyed speed freaks.)

So those sky-high numbers also make sense, Vuong said. "Someone who's really picky, they use the Soulmate Calculator and say, 'Hey, I better lower my standards because I'm unrealistic!'" he explained. "Someone who's in a relationship, it puts them in line. They realize what the actual odds are of finding someone else like that, so they're like, 'Wow, you are really special.' People need tools to figure out what's really real."

"On Wall Street, you're trained not to trust your emotions," added the former financial analyst. "If you do, you get burned in the market."

Vuong's calculator is only one element of a much grander scheme: to "solve" dating for everyone. In his elaborate Soulmate Manifesto, he outlines his model for a company that would be the eBay or Amazon.com of social networking -- rendering relative mom-and-pops like Match.com obsolete.

Whence Vuong's grand vision? "I'm super picky. I'm a social deviant. My favorite hangout is the library. Most women are not compatible with me. They talk, and I'm, like, falling asleep. I'd rather watch Charlie Rose," he told me. "So if I can create a dating service that will solve my problem, that means millions of people will find their soul mates."

Vuong describes his technology concept only obliquely. "Because of the solution's potential disruptive ability to damage other dating solutions and various industries," he explains, "the full details of the solution are kept secret until critical membership numbers are reached."

And you thought love was a mystery before.

Vuong is willing to explain that it's based in part on social networking theory: psychologist Stanley Milgram's notion (now being retested) that all U.S. citizens are separated from each other by only a few -- dare we say, six -- degrees. "We have a model that will leverage your existing social network and facilitate expanding it at a rapid pace," Vuong told me, adding, "but not like 'speed dating.'"

And guess what: It's working already! I forwarded Kris-from-Austin's dismaying results to my Brooklyn roommate to show him that he was not, so to speak, alone.

Colin's response: "Is she cute? I'm willing to move."