Who's afraid of Teresa Heinz?

The wife of presidential hopeful John Kerry is a rare political figure -- refreshingly honest and undeniably smart. So why are her own handlers hell-bent on shutting her up? 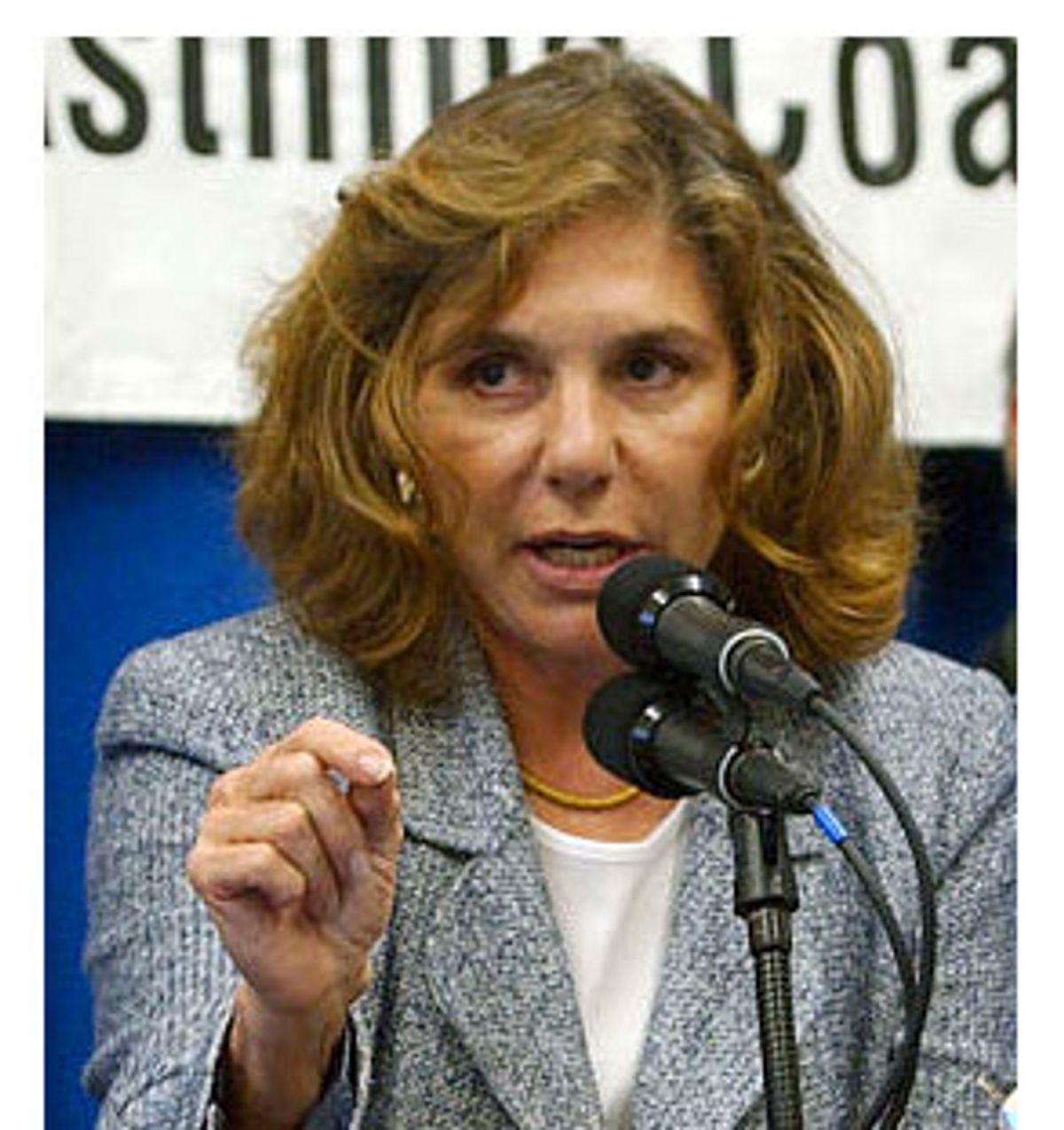 She is wealthy and exotic, a veteran of punishing loss and the beneficiary of extraordinary luck. She eschews fashion for convenience, admits readily to the use of Botox and a willingness to undergo plastic surgery. Her loyalty to her dead husband is as fierce as her feelings for her second; her attachment to the proprietary rules -- of feminism, party politics, polite society -- are easily trumped by her own sense of morality. She is married to the front-runner for the Democratic presidential nomination -- a dashing Vietnam vet known for his macho stoicism.

If she weren't a real person, one who really said "I don't give a shit," among other things, in a recent interview in Elle magazine, Teresa Heinz Kerry might be a figment of Aaron Sorkin's imagination -- a beloved political wife fluent in five languages, with brains, a hint of exposed cleavage, and no time for hand-wringing campaign operatives. If she were a "West Wing" regular, we would watch her character with delight, but also with a sense of doom, knowing that in the real world, the press and political consultants would crush her like a bug.

And we would be right.

As soon as columnists caught wind of Heinz's utterances in Elle, the snarky cackling began. "The Ungaggable Teresa Heinz" was the headline of an item in the Washington Post; "Salty Tongue" was the slug of the New York Post tidbit that began, "Sen. John Kerry might want to tell his wife to clean up her language now that he's running for president."

The cattiness turned to high snoot on Tuesday, when the New York Times weighed in, managing, in the first paragraphs of its piece, to accuse Heinz of "casually insulting a dead president and first lady." She accomplished this, according to reporter John Tierney, by saying of Richard Nixon, ostensibly in the context of his marriage to Pat: "Well, we know Richard Nixon wasn't too much in contact with how women should be."

That this delicate observation might be classified as a casual insult is remarkable. Textbook descriptions of the besmirched leader are more wounding. Whether this prim backhand was an attempt by the Times to conjure its own kooky Teresa quote, or was one more example of how desperately stuck in the past the paper happens to be, it is hard to say. Reading on, one has to conclude that it is both: a not-so stealthy grab for the reins of the Teresa bandwagon and a clunky display of crustiness by reporters and editors who take the "lady" in "first lady" very much to heart.

Consider the paragraph composed entirely of questions -- queries that evoke more judgment than wonderment: "Is she refreshingly candid or hopelessly impolitic? Will the fortune she inherited from her first husband, Senator H. John Heinz III, be used to pay for a winning campaign? Will middle-class voters be alienated by the 'ketchup heiress' with five houses and a Gulfstream jet?" Talk about casual insults.

To be fair, Tierney expands his inquiry to include the comments of campaign veterans and former aides to first ladies, but, other than the comments of Heinz herself and a Kerry staffer who bizarrely promises that Heinz will be "the John McCain of first ladies," there is little in the piece to commend Heinz's public displays of authenticity. The real-person shtick might work with suburban women who will consider it a strength, advised Paul Costello, former White House aide to Rosalynn Carter, and press secretary for Kitty Dukakis during her husband's presidential campaign. "But talking about botox treatments is not particularly on message unless you're at a fund-raiser on Rodeo Drive and Joan Rivers is the host."

It is hard to imagine that there are many voters left who don't recoil at the words "on message." If Costello means to suggest that Heinz doesn't work hard enough at telling people what they want to hear instead of what she really thinks, then he has delivered the Kerry campaign a glittering sound bite free of charge. Real people, as human nature and TV schedules demonstrate, are appreciated, even celebrated, by other real people -- not just suburban women. In fact, many voters have sadly concluded that they may never encounter another real person in politics, and this belief, compounded daily, isn't good for politicians. Demeaned by the assumption that they will believe anything, many Americans have responded with a complete lack of trust.

Which brings us to Costello's comment that Heinz's "mistakes" aren't so important now, "but once the campaign is in full throttle she has to learn, as every spouse learns sooner or later, that her primary job is to sell the candidate, not herself. And that's not easy for a strong, independent woman." Since Costello is a man, it is hard to know where his expertise for that last statement comes from. But it is the first bit, about what every spouse learns sooner or later, that is most confounding, especially in light of Costello's profession. What better person to sell a candidate than a strong, independent woman? What better way to sell the candidate than by selling oneself?

Of course, Teresa Heinz already has a primary job. With the $550 million fortune left to her by her first husband, Sen. H. John Heinz III, she runs the Heinz Endowments and the Heinz Family Philanthropies; she created the Women's Institute for a Secure Retirement, the H. John Heinz III Center for Science, Economics and the Environment, and the Heinz Plan to Overcome Prescription Drug Expenses. She has endowed two environmental chairs at Harvard, sponsors scholarship programs for graduate and minority undergraduate students who study science, and oversees the annual Conference on Women's Health and the Environment in Boston. She also serves on numerous boards, and is a trustee at various political institutions.

For some, Heinz's résumé is enough to make the sale. A woman with those credentials, some voters might say, isn't going to marry an idiot -- instead she is a jewel in his crown. And the fact that she has rejected the job as Kerry sales rep is enough to close a few more deals. But it is Heinz's habit of telling the truth -- of not selling anything -- that may be her husband's greatest advantage. Teresa Heinz is nothing if not honest. Even her most avid hecklers admit to that. A woman who is willing to divulge the extent of her depression after her first husband's death (she needed Prozac to pull her out of it), admit the difficulties of blending her family with Kerry's, reveal her contemplation of an abortion, and, yes, her regular use of Botox, is not a bullshit artist. When Heinz says that she believes her husband should be president, we know she is telling the truth.

To her credit, Heinz has remained calm -- and distinctly herself -- in the face of all the scolding and giggling and meanness. The fact is, she has endured worse and has, in her words, "more important things to think about." Heinz's mother battled disfiguring face cancer for 40 years, beginning in Teresa's youth, and died five years ago. When she was 24, Heinz lost her sister in a car accident; her first husband's death came after 25 years of marriage. "He taught me about life," she told Elle, adding that she "will always love him." To be vilified in the press as "a real person" is not likely to hurt her feelings.

Asked to respond to media scrutiny, and the unflattering accounts that result, Heinz is often described as sighing or laughing. To the Times she said, "If you talk about being frank with exuberance, or passion, that's one thing. Being frank and being offensive and indiscreet -- that's something else, and that I've not been accused of yet." In another comment to Tierney, she added: "Some people just don't understand that someone can be genuinely a person."

Indeed. If Teresa Heinz has a handicap in this race, it is the growing reluctance of Americans to believe that such a woman, at least in the realm of politics, might truly exist. The fact that some in the Kerry camp worry that such a political wife should exist is another problem. Could they be frightened by barbs like the one from Republican political consultant Nelson Warfield in the Times, who said of Heinz, "She's likely to be the Sharon Osbourne of first ladies"? Well, first, it should be noted that for some people, this would be a selling point. More important, though, the comment came in the same breath as a snotty reference to Heinz's wealth and the claim -- which she denies -- that she will fund Kerry's campaign. By Heinz's own measure, that would be frankness tainted by offensiveness and indiscretion, a transgression that warrants scorn, not defensive posturing.

Rather than worry about Heinz's tendency to be exuberant and wear the same Chanel jacket all the time (as was reported in Elle), Kerry staffers should be concerned about comments like the one Heinz handler Chris Black made in front of an Elle reporter during a meandering Heinz speech where she talked about green tea and prostate cancer, among other things. According to the story, Black -- hired in a panic last year after Heinz displayed a bit too much spontaneity in a Washington Post profile -- mused about the difficulty of keeping Teresa on message, calling the effort "an ongoing project."

So far, the project appears to have had only limited success. One apparent victory -- convincing Heinz to use the name Heinz Kerry during the campaign -- was more or less nullified by Heinz's comment about the change in Elle. "Now, politically, it's going to be Teresa Heinz Kerry, but I don't give a shit, you know? There are other things to worry about."

With any luck, Black et al. will throw in the towel before Heinz is whipped into Stepford submission, capable of little more than the vacant stare of wifely adoration. Remember: Hillary Clinton was what Costello would call "a strong, independent woman," who, until she was saddled with reinventing healthcare, was more of an asset than a curse to her (twice-elected) husband's cause, in spite of the squealing that accompanied her every move.

Honestly, at a time when political paragons of rectitude crumble like Baghdad statues, the unabashed candor of Teresa Heinz isn't just refreshing, it is a rare virtue -- and potential political gold. Stodgy purveyors of Beltway mythology are welcome to fret and fume about what sort of political wife can win, but they are wasting their time. We have discovered one that we deserve.