This pitch-perfect imitation of a Rock Hudson-Doris Day nonsex comedy features Renee Zellweger, Ewan McGregor and a passel of visual delights. But why should we care? 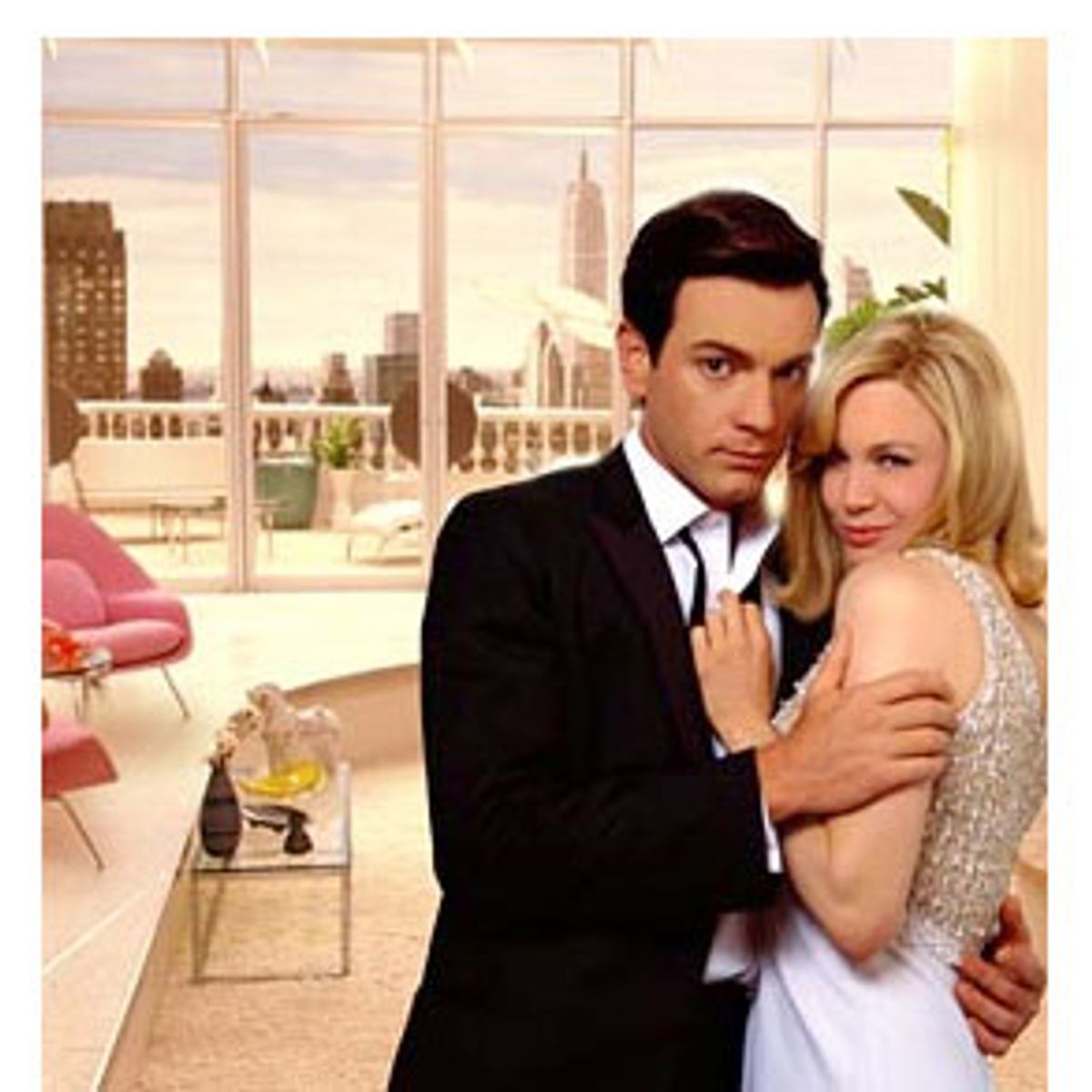 "Down With Love" is an aggressive trifle. Right from its kickoff, an explosively colorful animated credit sequence, the movie begs us to fall in love with it.

There's a good chance we might have. But the fatal flaw of "Down With Love," a note-for-note mimicry of early-'60s Doris Day-Rock Hudson comedies like "Pillow Talk" and "Lover Come Back," is that in mining what's kitschily amusing about those movies, it also re-creates far too faithfully everything that's unbearable about them. For every amusingly saucy double-entendre ("I've got her surrounded, and it won't take a surprise attack to enter her tepee!"), there's also a strangling surfeit of garish jokes that wink at the differences between the sexes. Those gags were squaresville even in the early '60s, and repeating them so exhaustively, even in this allegedly fresh context, doesn't make them funnier -- it simply makes the air around them feel stale.

"Down With Love" (which was shot, with gusto, by Jeff Cronenweth) is all done up in the Technicolor brightness of the originals, but, as with those earlier movies, its vivacious look seems to be covering up something -- as if color were a kind of Glade air freshener that could be sprayed liberally to mask anything that's simply old and tired.

Director Peyton Reed previously brought us the invigorating cheerleader satire "Bring It On," and I'd have thought that if anybody could make this type of material work (the script is by Eve Ahlert and Dennis Drake), he could. But "Down With Love" is grandly frustrating -- frustrating because so much of it is genuinely bright and funny, and because everyone involved in the movie obviously paid close attention to its clever details. (In one of my favorite moments, David Hyde Pierce, as the lead character's sidekick, waves an unopened vermouth bottle over the martini he's mixing -- a variation on the classic Winston Churchill recipe, which involved simply bowing in the direction of France.)

In fact, most of what I found so exhausting about "Down With Love" were my own efforts to like it, not least because it features two actors who, I think, have it in them to double-handedly revivify the genre of romantic comedy. Renée Zellweger is Barbara Novak, a pint-size cutie who has just arrived in New York City (from her home in Maine) to promote her new book, called, naturally enough, "Down With Love." It's a manifesto of womanly independence that seems to be a cross between Betty Friedan's "The Feminine Mystique" and Helen Gurley Brown's "Sex and the Single Girl."

Novak urges women to enjoy sex as men do, without emotional entanglement, and to dampen their craving for love by eating lots of chocolate instead. Ewan McGregor is Catcher Block, a star magazine writer and notorious playboy (his trail of babes is represented by a succession of luscious airline hostesses) who sets out to undermine Novak by disguising himself as an aw-shucks astronaut in order to make her fall in love with him.

But any chemistry McGregor and Zellweger might have had is plowed under by the movie's aggressive faithfulness to its inspiration. In fact, the actors play into the movie's scheme all too well: Like Doris and Rock, they're relentlessly stiff and bright -- sometimes they look as if they're moving like Puppetoons, not people. And when they finally do fall into each other's arms, as of course they must, the gleaming veneer of spoofery never cracks -- we can applaud their exactitude as actors, and yet we feel next to nothing for their characters.

Zellweger and McGregor are perfectly enjoyable to watch, particularly as they've been dressed by costume designer Daniel Orlandi. McGregor appears in a succession of dinner jackets and sport coats (not to mention boxer shorts, which he plays for laughs, even though they're oddly sexy) that amplify his already prodigious star quality -- his outfits seem to have been lifted straight from the box of Leading Man Colorforms, and he plays into them and off them wonderfully. (In one sequence, he stands curbside in a black-and-white checked jacket, just as one of those old yellow Checker taxicabs pulls up, its checkerboard stripe echoing the pattern of his coat. It's a superb example of how a cinematographer, a costumer and a production designer -- in this case, Andrew Laws -- can put their heads together to give one brief moment a gloriously satisfying click.)

Of the two stars, Zellweger comes off as more sly and crafty -- her character has a faint spikiness that you would never have found in those earlier movies. There's something vaguely devious about her lemonade squint -- even in a paper-cutout role like this one, she makes you believe there are infinite layers of surprise lurking underneath. In "Down With Love," few of them are allowed to come to the surface, simply because the steamroller-flattened material doesn't demand it. Even so, Zellweger is something to watch, prancing through the movie in more outfits than you can shake a Barbie case at: trim sheath dresses, checked suits with bright coats tossed over them, peignoir-type thingies for lounging about in her Manhattan-by-way-of-Hollywood pad (which features a view of both the Chrysler Building and an obviously fake moon). This is the most dress-up-doll of roles, and Zellweger, who always wears clothes beautifully, zips herself into it precisely.

Yet there are times when the movie's second bananas seem to have more presence than the leads: Sarah Paulson plays Novak's editor as one of those sharp-witted, vaguely annoying brunettes, but she wheedles us into warming up to her -- proof that you can play a caricature and be something of a real person, too. And Pierce, as Block's editor, practically steals the movie with nothing more than his elegant and always impeccable timing. Even the broadest jokes have a kind of delicacy when he delivers them -- he's a master at waving the vermouth bottle instead of splashing out the contents.

But Pierce is also the victim of one of the movie's worst missteps. His character, because he's intelligent, meticulous and likes to cook, is suspected of being gay -- it's a needless gag, and one that injects a sour note. To paraphrase Fred Astaire describing the aggressive vixen seductress Cyd Charisse in "The Band Wagon," "Down With Love" comes at you in sections -- big, boulder-shaped ones. After a while, even the most loving details start to get lost in the pileup.

While the movie pretends to update and send up the sexual primness of the Day-Hudson movies, it really just re-embroiders them endlessly: The movie's initial setup feels refreshing, because we believe that Novak, by trying to disassociate love and sex, has decided to become a female version of Catcher Block -- that would make the two of them perfect for each other, and it's also the perfect gimmick to open both sets of eyes to the fallacies of their thinking. But late in the movie, an unnecessary twist reveals that Novak has another motivation -- one that undermines her character's intelligence and independence. By the movie's end, the plot twists yet again, making the story longer and stringier and more belabored than it needs to be.

Everything that's wrong with "Down With Love" only seems intensified by everything that's right with it. It could have been wholly faithful to the movies that inspired it and been more than that. The chemistry between Zellweger and McGregor snaps to life in the musical number (shot on tape, to look like an Ed Sullivan Show appearance) that runs during the movie's closing credits: They shimmy together and against each other, finally throwing off that pushme-pullyu electricity that's missing through most of the movie.

There's a fabulous bit of business in the movie's opening scene, in which Novak steps out of Grand Central Station and crosses the street to -- where else? -- the United Nations (which, in real life, is many blocks away). That's a lovely expression of how the movie version of New York geography is even more New York than the real thing is -- there's so much crammed into the city that there's no reason major landmarks shouldn't exist side by side.

Then there's Block's Matt Helm-style apartment, filled with push buttons and sliding panels that reveal hidden bars and beds. And "Down With Love" does feature one sequence that's nothing short of sublime: As Novak and Block prepare for a date with each other, the scene cuts from one apartment to the other. Novak sails around her flat in skimpy underthings, with Astrid Gilberto's breathy, dreamy "Fly Me to the Moon" as her soundtrack. Block trots around his place -- again, in those boxers -- to Frank Sinatra's manlier but no less hopeful version of the same song. It's a perfect vignette of the way men's and women's expectations of romance are completely different -- and yet miraculously they move toward the same point at the speed of light, and, in the best cases, manage to actually meet.

"Down With Love" could have used more touches like that -- it needs less shtick and more feeling. You can't call the movie wholly misguided: It's loaded with energy and color, and if it had been toned down just a few notches here and there, it might have been just the thing to send audiences out the door feeling energized instead of drained. As it is, though, "Down With Love" is loaded with sugar and caffeine and not much else. It leaves you feeling shaken, not stirred.