Ari: Gone, but not forgotten

The Bush spokesman leaves. The cheers are not all for his benefit. 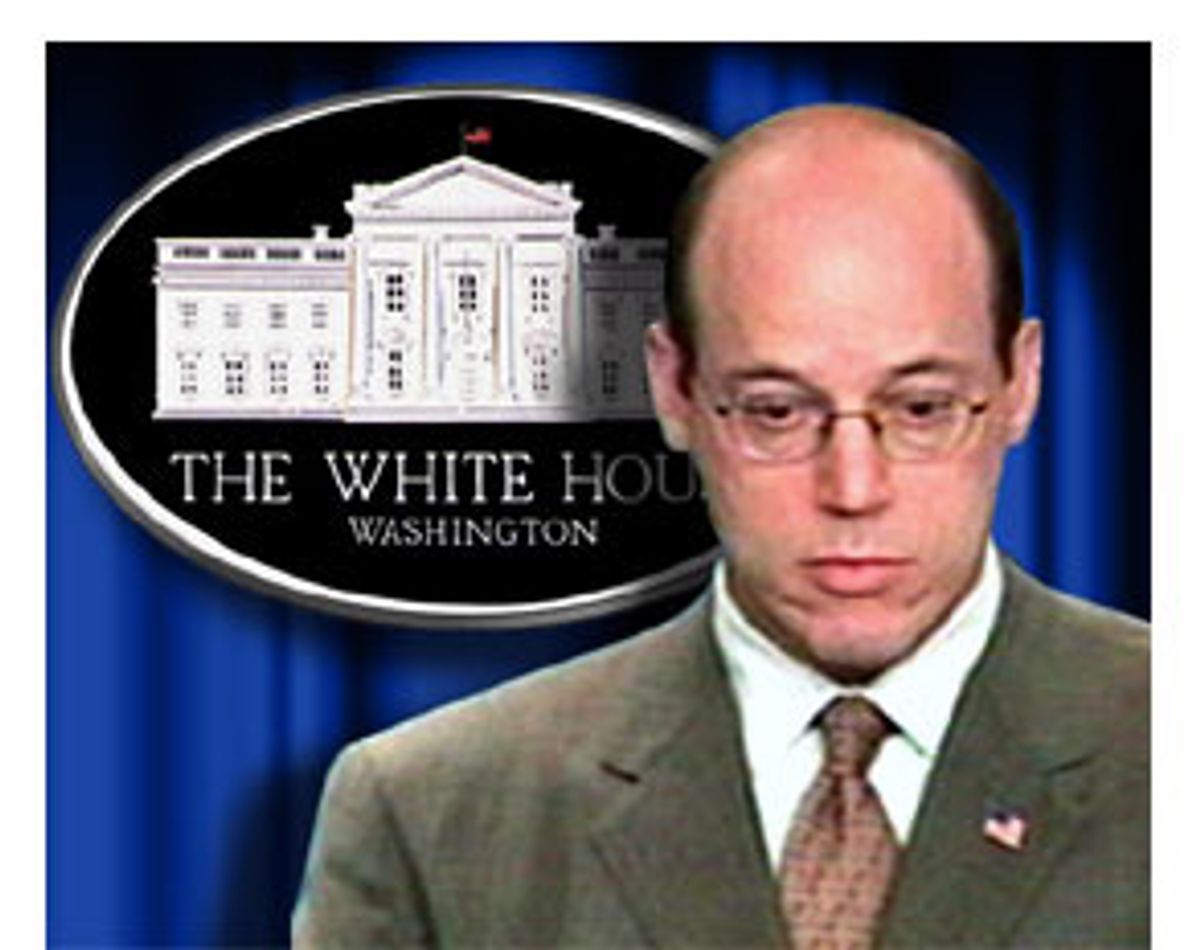 On Monday morning, White House spokesman Lawrence Ari Fleischer revealed to the Associated Press that he is heading out the door, seeking employment in the private sector. When he told his boss the news on Friday, the conversation ended with the president "kissing me on the head," Fleischer said.

Bush officials heralded his service. "Ari was a good soldier," said Bush media advisor Mark McKinnon. "He has been a very steadfast carrier of the Bush message and delivered a very solid performance across the board in one of the most difficult jobs in Washington. His message discipline was extraordinary."

Little such admiration awaited Fleischer, 42, in the White House briefing room where the bald, bespectacled Bush-backer has been a controversial figure; by one account, the applause greeting Fleischer at his morning gaggle with reporters fit the very definition of "smattering." Some were sympathetic. Said one White House reporter, "Ari had an impossible job. He was supposed to talk to the press in a White House that does not talk to the press." A senior Republican congressional aide pointed to one of Fleischer's higher-ups as the reason so many reporters found Fleischer wanting. "All [Bush senior aide Karl] Rove wants is just a P.A. system," the aide said. "It's not really a job with a lot of art to it in this administration. Ari is just a guy who goes out there and reads some version of congressional campaign committee talking points. It's something that anybody with a larynx could probably do."

But while Fleischer served his patrons with loyalty and single-mindedness, he frustrated reporters by going far beyond spinning -- telling untruths and taking great effort to intimidate, several White House reporters said. "No one's shedding any tears," said another White House reporter. "His personal style -- the smarminess and unctuousness -- was annoying to people. But his deceptions and the telling of falsehoods is what really turned people against him."

To many in the press corps, Fleischer -- to borrow a metaphor from his beloved New York Yankees -- became the Babe Ruth of out-of-the-park whoppers. As the Houston Chronicle editorial page -- which endorsed President Bush in 2000 -- wrote of Fleischer earlier this month, "Perhaps not since Ron Ziegler made inoperative statements on behalf of Richard Nixon ... has a press secretary exhibited such a brazen and cavalier disregard for the facts."

Fleischer wasn't even close to presidential politics when he began butting heads with reporters. After serving in the press shop of Sen. Pete Domenici, R-N.M., from 1989 to 1994, Fleischer served as spokesman for House Ways and Means Committee Chairman Bill Archer, R-Texas. It was there that GQ magazine's Ruth Shalit (before her journalistic scandal) found him. She wrote a piece for the June 1997 issue titled "Flack Out of Hell" that at the time seemed inordinately harsh but in retrospect seems prescient of the tensions that would mark his White House career. "Far from charming reporters out of their shoes, Fleischer is driving them up the wall," Shalit wrote.

After serving as the spokesman for Elizabeth Dole's disastrous presidential campaign, Fleischer teamed up with Team Bush in November 1999 after being heavily recruited by advisor Karen Hughes when David Beckwith, a communications director popular with reporters, was ignominiously dismissed. Fleischer was merely one of many campaign spokesmen at that point, but after Election Day, he was tapped for the big job behind the podium.

At the beginning of the Florida recount mess Fleischer disputed the notion that any voters were confused by the butterfly ballot, asserting that "Palm Beach County is a Pat Buchanan stronghold," a claim disputed by Buchanan, his Florida coordinator Jim McConnell, and Jim Cunningham, chairman of the executive committee of Palm Beach County's Reform Party.

That quote seemed to set the tone for his tenure. Plenty followed.

It was also, however, frequently clear that Fleischer was hopelessly out of the loop. On March 13, AP reporter Ron Fournier asked Fleischer if the president had plans to leave the United States to meet with U.K. Prime Minister Tony Blair. "As I told you this morning, there are no plans to travel," Fleischer said. "I asked that question to the chief of staff; he said there are no plans to travel. And so I don't have any information for you beyond that." Fournier asked if there were "tentative plans to visit Tony Blair," to which Fleischer responded that there was "no information about something that there are no plans to do." A day later, Fleischer announced that Bush would summit in the Azores with Blair and Spanish Prime Minister Jose Maria Aznar. "I wouldn't have said what I said if I didn't think it was accurate," Fleischer said.

At the beginning of Bush's term, a White House reporter tells Salon, "when something Ari said didn't check out, you had to ask yourself two questions: Was he being purposely deceitful? Or was he just not in the loop?" After the departure of aide Karen Hughes, the reporter says, "undeniably his access improved, making that calculation a bit easier."

Information is often kept from spokesmen to keep them from revealing certain information or from encouraging them to lie. Fleischer's steadfastness and brusque manner, however, often made it difficult to determine the motivation for his obfuscations. After the Enron scandal broke on Jan. 16, 2002, reporters asked if the White House was determining whether officials of the administration had received any phone calls from officials at Enron. Fleischer's evasions were remarkable. "On any topic, on anything?" he asked. "The standard the White House has put in place," he said, is to only answer questions about specific calls and not to respond to any "broad, open-ended question." Reporters persisted, asking "whether these calls were made." "'These' calls, meaning which calls?" Fleischer responded. "You said, 'these calls.' Describe the calls."

On other occasions, Fleischer seemed to have too much access to information. In February 2002, it was clear Fleischer was merely reflecting the view held by his boss when he blamed violence in Israel as the result of President Clinton's failed attempt to bring peace to the region. "In an attempt to shoot the moon and get nothing, more violence resulted," he said. "As the result of an attempt to push the parties beyond where they were willing to go, that led to expectations that were raised to such a high level that it turned into violence."

When Democrats expressed outrage that he would blame the second intifada on Clinton's attempts to broker a peace deal, Fleischer said, "Of course, I stand by it." Hours after that, he issued a statement retracting his remarks. "I mistakenly suggested that increasing violence in the Middle East was attributable to the peace efforts that were under way in 2000," he said. "That is not the position of the administration ... The only people to blame for violence are the terrorists who engage in it." But even while that statement was issued, senior White House officials whispered to reporters that not only had Bush agreed with Fleischer, but that the first remark was also accurate. A few weeks later, Bush told British television, "It wasn't all that long ago where a summit was called and nothing happened, and as a result we had significant intifada in the area."

There was the side to Fleischer that liked to bully. It was most famously displayed when comedian Bill Maher, then host of ABC's "Politically Incorrect," unfavorably compared the courage of U.S. foreign policy makers with the 9/11 terrorists -- "We have been the cowards," he said, "lobbing cruise missiles from 2,000 miles away" -- Fleischer noted that all Americans "need to watch what they say, watch what they do."

After William Kristol, editor of the Weekly Standard, predicted in the Washington Post that Vice President Al Gore would win the election, Fleischer called him to tell him his prediction had been "noted."

In May 2001, Bennett Roth of the Houston Chronicle -- pointing out that the president had encouraged parents to speak to their children about drug abuse -- asked Fleischer, "How much has he talked to his own daughters about both drugs and drinking? And given the fact that his own daughter was cited for underage drinking, isn't that a sign that there's only so much effect that a parent can have on their children's behavior?" Fleischer asked Roth to respect the president's privacy and later called him, reporting that his question had been "noted in the building."

Dana Milbank of the Washington Post went through perhaps the most public feud with Fleischer. Milbank, whose stories have garnered him the 2002 Aldo Beckman Award for White House coverage, was criticized by Fleischer in the May 2001 Washingtonian. At the last two presidential press conferences, neither Milbank nor his colleague Mike Allen -- who shares the beat with Milbank for the hometown, politics-heavy newspaper -- were called on.

Presumably today stands as one of Milbank's better days on his beat. This is a sentiment assuredly not shared by Fleischer's fan clubs, which popped up on the Web here and here. (Better buy your Ari Fan Club gear quickly!)