Let's salute "Buffy the Vampire Slayer's" greatest accomplishment: A girl who not only kicked ass, but rejected the lonely-guy way of being a superhero. 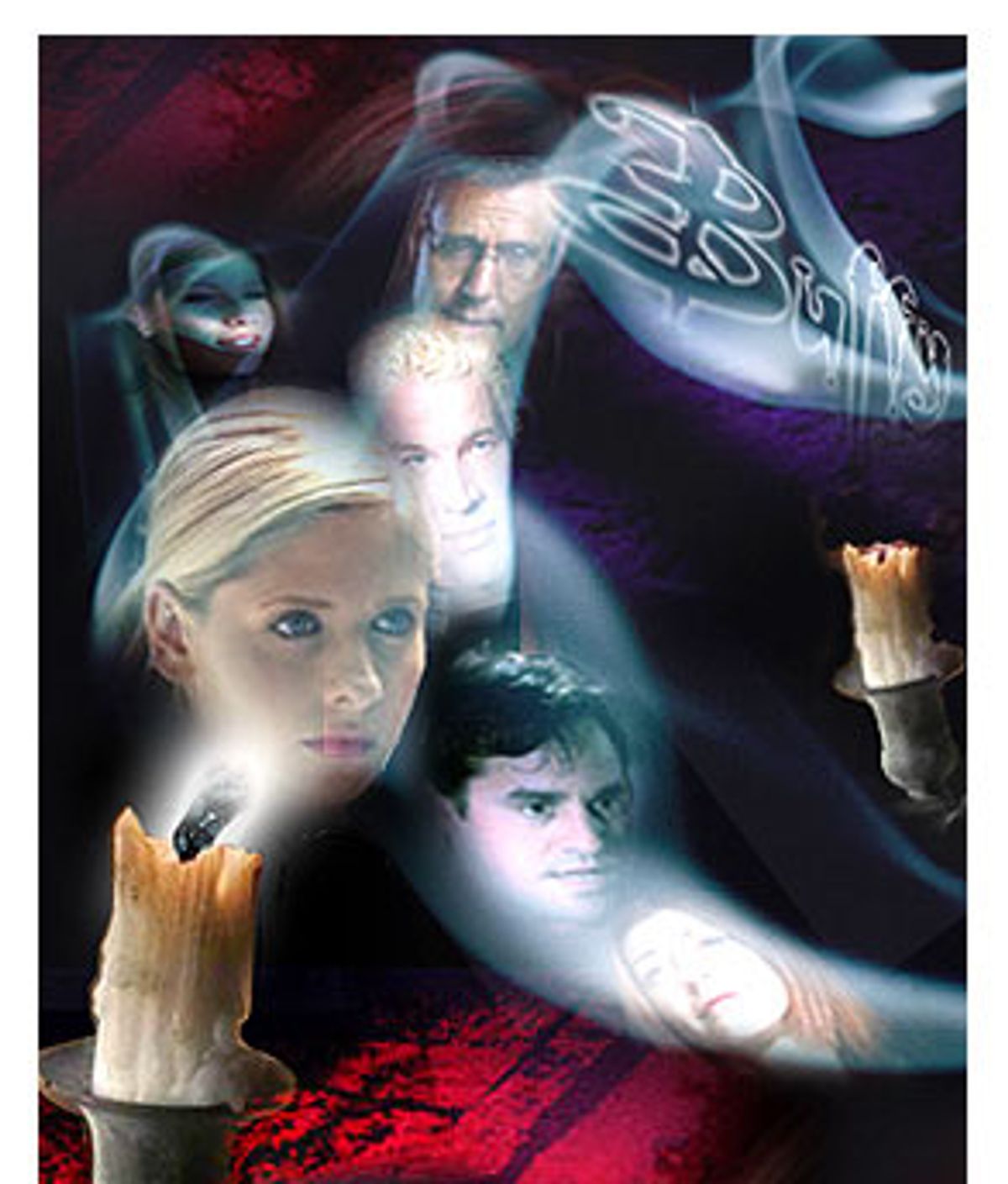 Buffy Summers, vampire slayer, has come a long way since she was originally imagined, over a decade ago, by her creator Joss Whedon as "the blonde girl [who] strikes back," the traditional victim of the horror genre turned powerful avenger, who gives that monster lurking in the shadows much, much more than it bargained for. In the seven years that "Buffy the Vampire Slayer" has been on the air, Buffy has died and come back to life twice, lost a mother and gained a kid sister, taken lovers both human and not, run away from home, graduated from high school, dropped out of college, killed the man she loved, fought a treacherous rogue slayer and a best friend gone (temporarily) bad, busted out into song, gotten entangled in a self-destructive affair, lost her mentor, worked in a burger joint, and of course, slain countless vampires and other demons and averted a half dozen apocalypses. Those who have followed her adventures will watch intently Tuesday night to see how this career will be capped off.

The notoriously possessive Buffy fan base is consistent in that it invariably dislikes the current season. They hated it when Buffy's best friend Willow (Alyson Hannigan) abandoned her lifelong crush on fellow Scooby gang member Xander (Nicholas Brendon) for a relationship with Oz (Seth Green) -- though they later developed a passionate attachment to Willow's new boyfriend. They hated it when Angel (David Boreanaz) left Sunnydale for Los Angeles (and his own series). They hated it when the Scooby gang left high school, and then they hated it when Buffy left college for the tedium of the working world in order to support her sister Dawn (Michelle Trachtenberg) after their mother's death. They hated it when Buffy came back from the dead after the climactic self-sacrifice that ended Season 5 and was understandably addled and depressed as a result. And since she's gotten over that, they don't like the fact that in Season 7 she's become, in the words of one devotee I know, "a total bitch."

All this is pretty ironic, when you consider that most fans will also tell you that "Buffy the Vampire Slayer" is about growing up. The creators of imaginary worlds know that they have to stick to their own invented rules. While J.K. Rowling has decreed that death is irreversible in her Harry Potter series, Whedon, who has made resurrection a possibility, nevertheless insists that you can never hold on to the past, or for that matter, the present. Letting go and moving on is, after all, what growing up consists of, even for people obsessed with television depictions of high school life.

One thing about "Buffy" that hasn't changed, though, is that idea of the blonde who strikes back. Her blow has generated ripples that have traveled to some unlikely and marvelous places. Fetching, absorbing and hilarious as some of the series' tangents have been, the core of "Buffy the Vampire Slayer" has always been the story of a girl hero (well, superhero, to be precise). It's commonplace by now to rave about the liberating effect of Buffy's heroism on girlhood, the supposedly salutary and definitely gratifying spectacle of a young woman kicking bad-guy ass. There's Buffy's independence, her formidable strength, her radiant courage. But if what Buffy's heroism has done to girlhood gets talked about all the time, what her girlishness has done for heroism is even more revolutionary, if less well sung.

An early influence on Whedon was Richard Slotkin, a novelist, historian and professor of American studies at Wesleyan University. In his 1992 book, "Gunfighter Nation: The Myth of the Frontier in 20th-Century America," Slotkin surveys hundreds of westerns -- films, books, radio and TV shows -- and notes the emergence of a particular kind of American hero after the fading of the New Deal. This hero, the lone gunfighter, is cut off from the very community he defends. The eponymous character played by Alan Ladd in "Shane," for example, rides into a small town, saves it from the depredations of a wicked cattle baron, but rides out again afterward, unable to enjoy the peace and prosperity he helped secure. His special ability as a gunfighter obligates him to rescue the weak and the good, but his involvement with violence prevents him from forming real relationships with them. They need him, but he can never be with or of them. His chief traits are, in Slotkin's words, "his loneliness, his skill, his fatal celebrity."

The glamorized alienation of the gunfighter carries over into the hard-boiled detectives of noir and, of course, the superheroes of comic books who, like Buffy, are supposed to conceal their secret crime-fighting identities from those acquainted with their workaday selves. But from the very beginning, Buffy could not keep her mission to herself. In addition to her assigned Watcher, Giles (Anthony Head), she quickly acquired allies in Willow and Xander, who in turn drew others into the Scooby gang. The traditional American male hero wallows in romanticized isolation, a condition supposedly forced upon him, but one that also conveniently caters to an aversion to connection and intimacy.

Buffy, however, not only allows herself connection, she demands it. Furthermore, in the first few seasons, she insisted on gossiping about boys, running for homecoming queen, and going on dates and to the prom -- in other words, having a life -- despite the ongoing demands of fending off archvillains ("If the apocalypse comes, beep me!" is one of her best lines). This, like her mom's inability to see that Buffy is acting like "it's the end of the world" because it literally is the end of the world, gets played for laughs, and it's very funny, but it's also the show's most radical twist to the genres it plays upon. There were girls who kicked ass in pop culture before Buffy, going back at least as far as Mrs. Peel of "The Avengers," but they always wound up living the relatively solitary lives of the male heroes they resembled.

Although Buffy's commitment to having a life initially earns her flak from by-the-books types like Giles and the vampire slayer Kendra, it's actually a source of her potency. As various demonic individuals have observed throughout the series, Buffy is an exceptionally powerful and long-lived slayer, and her friendships are at the heart of that. The original slayer, appearing to Buffy in a vision, objects to these attachments and menaces Giles, Xander and Willow, but Buffy scorns this ancient mandate and successfully fends off the specter. "That's your whatcha-call-it, variable," Spike says to Adam, the Frankensteinian monster looking to eliminate Buffy in Season 4. "The slayer's got pals."

Over and over again, when the going really gets tough, it's love, not might, that gives Buffy the edge she needs to triumph. And in the heartrending conclusion to Season 6, when faced with a Willow who has been swallowed by the Dark Side due to her overwhelming grief over her lover Tara's death, Buffy fails. It is the pure, suffering transcendence of Xander's love for his old friend that saves the world.

The subtler ways in which the series has reinforced this idea are perhaps even more persuasive. Take Faith, the Nietzschean vampire slayer who first tempts Buffy to exercise her powers freely, without conscience or responsibility, for the "rush" of the kill. Buffy rejects this idea and Faith herself, after Faith accidentally murders a human being and claims to be unbothered by it. Faith turns evil, signing on with Sunnydale's mayor (my favorite "Buffy" villain by far) who's scheming to turn himself into an all-powerful demon. However wicked the mayor may be, he and Faith establish a warm, genuinely touching relationship. As Faith soaks up his fatherly affection, it's clear that she's never before felt a sense of belonging and that this is the source of both her failure of empathy and her resentment of Buffy. Badly as Faith behaves throughout that season, her loss and her need are palpable and understandable; she never loses our sympathy. Not only is intimacy the foundation of goodness' strength; its absence also creates a susceptibility to corruption.

This season, however, Buffy has drifted away from that core strength. She's been struggling to find the right way to handle her authority (a harder thing for most women to manage than the usual coming-of-age travails) over both her original group and a passel of wayward and poorly trained potential slayers. As a result, she's been slipping into the leadership style of a thousand westerns and war movies: gruff, remote and preoccupied with her own burden. How much of this is an avoidable part of being in charge, and how much the kind of self-protection she used to disdain? Recently, she confessed to not letting herself care about any of the potential slayers as people because she knows that some of them will die. She knows that's a mistake, but can she regain her heart? Will she figure out how to get back to where she once belonged? That's for the season finale to tell.

Of course, there's also the question of Spike or Angel -- a lamentable "Dawson's Creek"-style note to the end of a series that was more than mere soap opera. But even the resolution of that triangle will, knowing Whedon, tap into his heroine's final dilemma -- to connect or not to connect? It's not so much the kiss between Buffy and Angel in last week's episode that gave me pause as it was something we saw on her face just before the clinch. It was a real, unqualified smile. Can it be the first one she's allowed herself all year? What I read in Buffy's face was not only love but a kind of emotional relief that might be best described as fellowship.

When all is said and done, Buffy isn't really like the rest of us -- she's got a particular, difficult destiny to go along with her superpowers, and lately she's really been feeling it. She's larger than life, and Angel is the only person who can share that with her; the rest of us, Spike included, are life-size. Even her romantic choice, then, must resonate somehow with the show's core theme. Buffy's fought mightily over the past seven years, not just against "the vampires, the demons and the Forces of Darkness," but also against detachment, self-pity and arrogance. The best that this ardent fan can hope for her is that somehow, once and for all, she'll win.