A hole in our hearts

The last-ever "Buffy" episode leaves Sunnydale destroyed, the Slayer alone but not alone and the surviving Scoobies headed who-knows-where on a school bus. 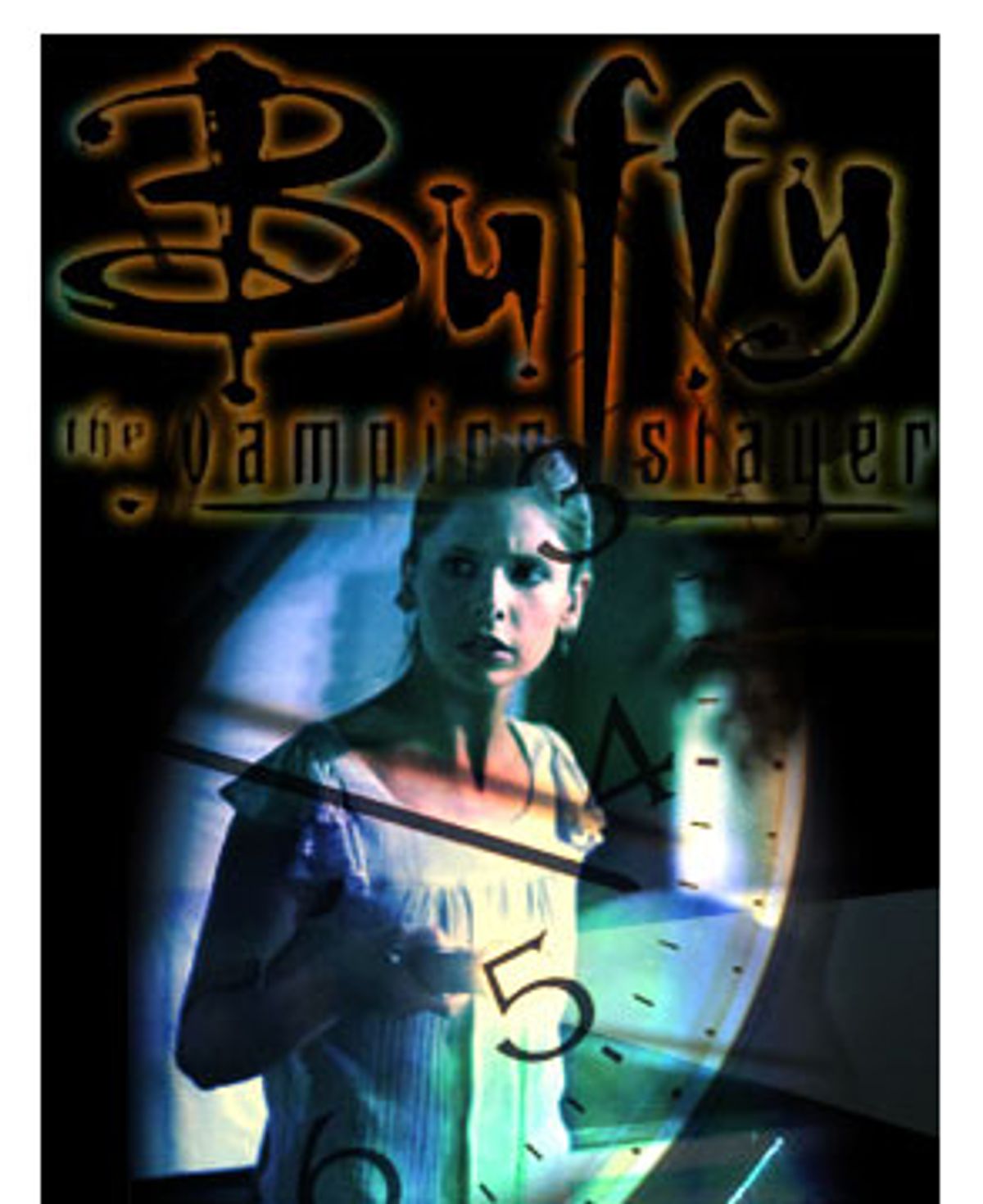 As of the last 10 minutes of the last-ever episode of "Buffy the Vampire Slayer," a show that has challenged, energized and sometimes confounded audiences for seven seasons, the town of Sunnydale -- an entryway to the gates of Hell itself -- no longer exists. It is a hole, a large dusty hole, a hole that has swallowed, supposedly forever, the forces of evil that had been gathering to destroy the world. The core characters of "Buffy the Vampire Slayer" -- Buffy, Willow, Xander and Giles (played by Sarah Michelle Gellar, Alyson Hannigan, Nicholas Brendon and Anthony Stewart Head) -- the ones who have always meant the most to people who love the show, survived the battle. Anya and Spike (Emma Caulfield and James Marsters), characters most of us also grew to love, did not.

But every one of them, dead or alive, leaves a hole.

Until the very last two episodes, I had believed that "Buffy the Vampire Slayer" had reached its true and natural end last season, at which point Willow had come within a hair's breadth of destroying the world and Spike had crawled off to God-knows-where to get all sweaty and naked and re-emerge with a soul. The Spike and Buffy romance of last season had made perfect and devastating sense: Theirs was a connection born of carnal desire, desperation, mutual outsider status and a little healthy, old-fashioned self-loathing. It made us uncomfortable, and it turned us on. Were we meant to fully understand it? I hope not. What does anyone ever truly understand about sex anyway?

Most of this season felt vaguely anticlimactic. It rolled off to a slow start as the characters, particularly Willow, came to terms with having pulled back from the edge. Series creator Joss Whedon and his writers did their best to build a sense of dread about what was coming, dread that was sustained for a few episodes at least. Remember the First Evil's withering warning, "From beneath you it devours"? As we now know, the First just meant there were a lot of bad guys lurking underneath the surface of the city, an army of bony, bald, bloodthirsty goblins whose throngs evoked the menace of the advancing enemy army in "The Lord of the Rings: The Two Towers." They were terrifying in their sheer numbers, but somehow they didn't exactly fulfill the potential horror that that warning represented. Still, until we actually met that army, we didn't know exactly what the First meant. Whatever it had in mind sounded vaguely sexual, almost titillating in its sense of sinister promise.

Then came the potential slayers, summoned to Sunnydale to help fight the First's mounting threat, and the series' sense of dread wobbled uncertainly in that pajama party-boot camp setting. Buffy, intent on getting the girls ready to face the horror she knew was coming, became self-serious and tiresome, carrying a heavier load on her shoulders than ever before. She gets a good St. Crispian's day speech in there somewhere, but we feel her authority hissing out of her -- that was precisely the point, but Buffy's tireless sense of self-righteous selfhood dragging on the show's momentum. Then the truly terrifying misogynist "priest" Caleb shows up, and the show gets a jolt. And then a misfire: Xander gets an eye poked out and, while we always need to expect that bad things will happen to people we love in the "Buffy" universe, there's something about the act that feels forced and false.

For much of this past season, the single biggest thing we've always held dear about the chief characters in "Buffy" had been held away from us: Their wit. Too exhausted and scared to be funny, the characters concentrated on battling the coming, faceless evil with grim determination -- not a good look on any gal or guy. They were humorless and glum, with the exception of reformed bad-guy nerd Andrew (Tom Lenk), the also-ran who ended up being the saving grace of the season, getting most of the sporty asides the other characters were no longer allowed. (The phone rings, and he answers with obvious excitement: It's the comic-book store, telling him that the latest "League of Extraordinary Gentlemen" has come in. Xander, caught up momentarily by Andrew's enthusiasm, pipes up: "Can they get two?")

And then suddenly, or perhaps gradually, in the last week or so leading up to the finale, Whedon began to restore the characters to us. Instead of snapping at one another, they fell into their old patterns of working together, patterns that until recently had always (or almost always) worked without a hitch: Buffy asks Xander for an important favor, which he, in his unswerving faithfulness, doesn't hesitate to carry out. Giles and Willow hit the books, sifting through information that will, with any luck, help them beat the devil. Gearing up for battle, the bunches of people who have gathered at the Summers household to destroy the coming evil (among them Eliza Dushku's Faith and D.B. Woodside's Principal Wood) make jokes -- and make love. What have they got to lose?

So Whedon set us up for an ending that wouldn't, of course, change the bumpy shape of the season that preceded it, but would at least make sense of it. And would, most significantly, leave these characters in a place we could live with.

Buffy has always been the center of the show. And yet she's also been something of a blank, at times a blazingly bright one whose sole purpose seemed to be to reflect light off the other characters, who often had more dimension. Buffy has always been, on the surface at least, the kick-ass girl heroine who could take care of everything -- in fact, she insisted on doing so. But Buffy was always moving, both literally and metaphorically, and sometimes so fast you could barely get a glimpse of her. Where, exactly, was she headed? She always seemed on her way to becoming. But becoming what? Angel, her first love and perhaps her truest one, betrayed her (as the result of an old gypsy curse) just as she thought she was getting the hang of the whole having-sex and being-a-woman thing.

She had a sturdy, comfortable rapport with Riley, the straight-and-true college boyfriend, but his dullness threatened to dull her. And Spike, who fell deeply in love with her in spite of himself, brought out her cruelest side. As a couple, they were more doomed than Buffy and Angel had been, and yet they were better suited. For Buffy, Angel was the first love who stays with you forever, but with whom you could never live -- that kind of intensity just doesn't jibe with the everyday eloquence of getting the laundry done or putting your toothbrushes side-by-side in the same cup.

But Spike and Buffy were something else again -- less iconic, definitely, but also less matchy-matchy perfect. You couldn't see them snuggling in a cottage built for two, but you could see them egging each other on, year after year (one growing gray and the other progressively blonder), with their banter and casual insults, their love an uneasy but always-crackling energy. Of course, not even that imperfect kind of love is meant to be: Buffy does love Spike, but perhaps not as clearly and wholeheartedly as he has come to love her. And so his "death" (as of now, we can assume it was a death) becomes a sacrifice he makes for her. Formerly one of the cruelest vampires to walk the earth, he at last gets the chance to be the hero, just like his rival, Angel.

So as the world of "Buffy" as we know it ends, Buffy is alone. The temptation to define herself in terms of her boyfriends is gone, because all her boyfriends are gone. We can all connect with Buffy's yearning to be with someone, but we can all connect just as fully with her clumsiness at not being able to get the hang of it. She will figure it out, but we won't be around to see it. In her final scene with Angel -- who has stepped in unexpectedly to give her some crucial information, and a talisman -- she uses a typically goofy Buffy metaphor, the sort of thing we haven't heard from her in a long time: "I'm cookie dough. I'm not done baking." She's merely expressing what we've known all along, but to hear her say it herself is blessed relief.

It's fitting that the last episode of "Buffy the Vampire Slayer" was mostly, for once, almost wholly about Buffy, with Giles, Willow and Xander falling into place behind her. (But not before Xander has given us two perfect moments of absolute, painful perfection: In the first, he calls out for Anya, but he's unable to see her body in the rubble, as we do; and later, when Andrew explains what happened to her, he betrays his anguished love for her by remarking stoically, "That's my girl -- always doing the stupid thing.") It's fitting that the Scoobies escape from the destroyed Sunnydale on a school bus -- they're adults, once and for all, and yet some of their youthfulness and old camaraderie have been restored to them forever.

"From beneath you it devours." But it, that unspeakable evil, didn't devour them or us -- it never got a chance to. We've been left intact, the better to appreciate the cavernous pit that used to be a town without pity called Sunnydale. The four citizens who meant the most to us -- Buffy, Willow, Giles and Xander -- are alive, still standing, a good thing because to lose any of them would have been more than we could bear. Most of us, sensible grownups that we are, would agree it was time for "Buffy the Vampire Slayer" to end, which isn't necessarily the same thing as wanting it to end. And so Buffy, Xander, Giles and Willow go off, who knows where, in their school bus.

And leave us behind to face the hole.