A new comic scrapbook shows why the feline in the shiny black bodysuit has the power to undo even the most rock-jawed superstuds. 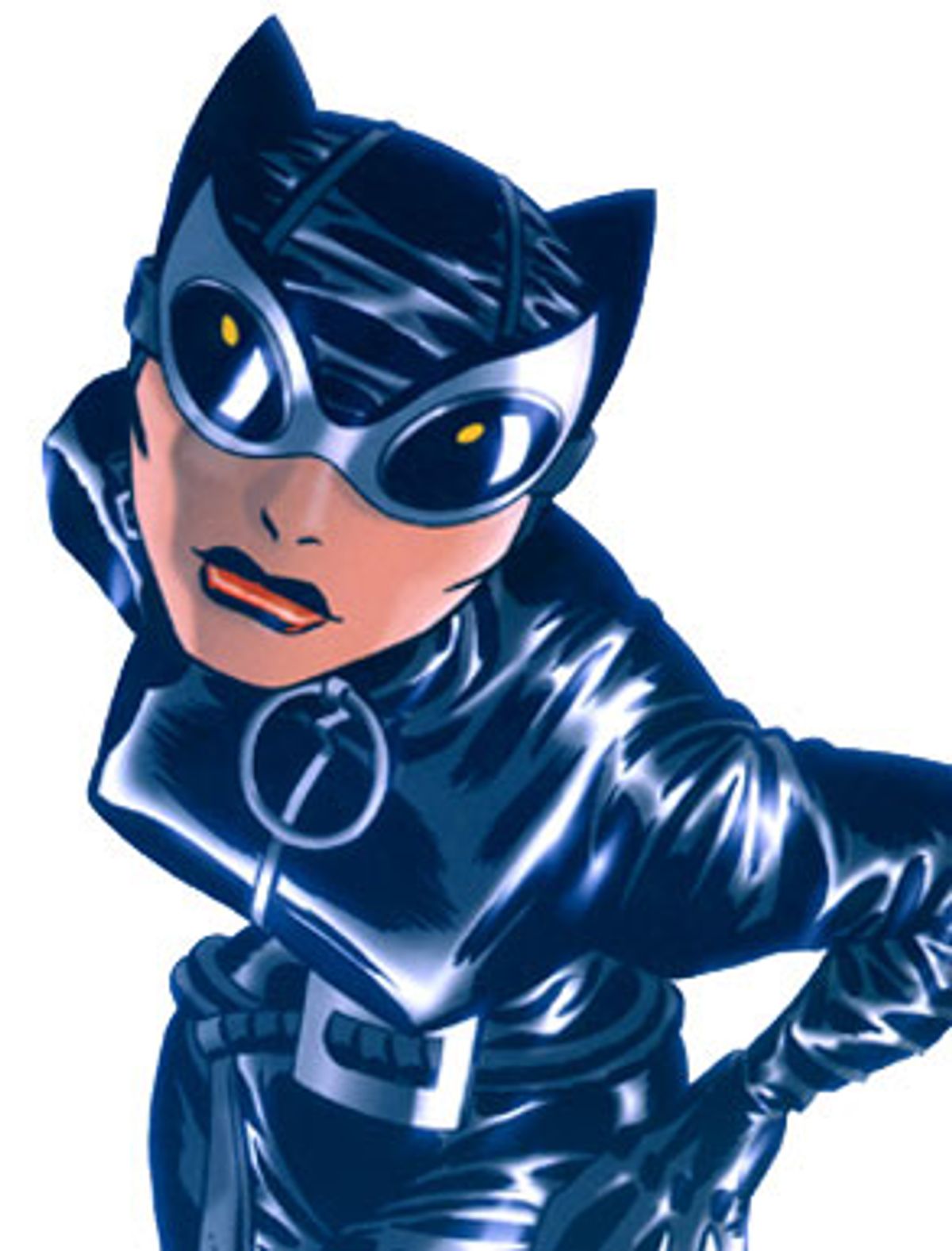 The first time I laid eyes on Catwoman wasn't in a comic book but on the '60s TV series "Batman." At age 4, I had no idea that the show was meant to be camp (or what camp was -- apart from a place I had no desire to go). I started watching at the behest of my cousin Judy, who was my age and as taken with it as I would become.

I still vividly remember the two of us sitting in my living room in front of my grandparents' massive old console television set. And I'll never forget the first thing I saw: Julie Newmar as Catwoman, walking up to a jewelry store window in the dead of night, cutting a perfect circle in the glass with one of her sharpened claws (who knew you could cut glass?), and reaching in to remove a glittering diamond necklace.

I don't think it was Catwoman I was smitten with as much as her larcenous behavior. I knew she was supposed to be a "bad guy" but just being able to take what you wanted looked fun. Later, I can't remember whether it was in a different episode, Catwoman dangles over the edge of a yawning cavern, one hand clutching a stash of stolen goods, the other holding onto Batman who is begging her to drop the loot and pull herself to safety. Refusing to take the wimpy way out, she lets go of Batman and plunges to the end of one of her nine lives.

Even at 4, as much as I bought into the whole good-guy superhero thing, as much as I adored Batman (and he is, in some ways, still my favorite fictional character), I loved the insane gutsy selfishness of Catwoman hurling herself over a cliff. A few years later, Jim Morrison would proclaim, "We want the world and we want it now!" Catwoman gave me my own childish version of that unreasonable demand, without all the Lizard King bushwah that accompanied Morrison's prancing and posing. Cats can make a snack out of lizards any day.

The eternal sex appeal of Catwoman has something to do with the form-fitting costumes, with the booming breasts she was given in the "Catwoman" comic book of the '90s, with the fantasies girls as well as guys may harbor of Julie Newmar or Michelle Pfeiffer (who, to my mind, owns the role the way that the recently departed Wendy Hiller owned Eliza Dolittle). But it has everything to do with one of the sexiest attributes there is: self-confidence. And also, strange as it may sound when talking about a slinkily dressed jewel thief, with purity.

The great femme fatales are, in their absolute dedication to duplicitousness, some of the purest creations ever to make their regal way through pop culture. Sharon Stone in "Basic Instinct" is always given as the great contemporary example. And as much as I love that performance, the deadpan camp of Stone's portrayal can seem forced next to Jane Greer in the great '40s noir "Out of the Past" (the director, Jacques Tourneur, must have recognized her purity: Throughout the movie, Greer is dressed almost exclusively in white) or Rebecca Romijn-Stamos in Brian De Palma's "Femme Fatale."

Those performances, Romijn-Stamos' especially, take on the inherent misogyny out of which springs the whole notion of the femme fatale -- the idea of woman as seductress/destroyer -- and they turn on that misogyny with a vengeance. They play on the secret fantasies we bring to movies and comic books, the chance to indulge our larcenous and vengeful impulses by identifying with the villains. And they play on the eagerness of movies and pop culture as a whole to indulge our love of style. Greer and Romijn-Stamos make their unwavering dedication to their own desires -- sexual as well as material -- and their ineffable cool sophistication seem like the highest form of amoral integrity, a code of behavior beyond all those deadening drags like responsibility, duty, morality.

That's the category Catwoman belongs to. You only have to look at the way many of the female characters in comic books (mainstream ones at least) are drawn to see that they exist to appeal to adolescent male sex fantasies. But when you introduce unrepentant female sexuality into an adolescent male sex fantasy, all the male impulses of control and domination run for cover. That can easily be the basis for the old sexist tropes of the female being deadlier than the male. But unlike any of Batman's other regular nemeses, Catwoman has never inspired hatred. She divides us from the ostensible hero, and her function in the comic and in the TV show and movies has been to divide Batman from himself.

The new scrapbook volume "Catwoman: The Life and Times of a Feline Fatale," by Suzan Colón, is illustrated with examples of Catwoman's relationship to Batman. There are stories from the old comics where Batman "inadvertently" allows Catwoman to escape. There's also this great exchange from the '60s TV show: Catwoman says to Batman, "I can give you more happiness than anyone in the world. I mean, it's me and you against the world." To which the Caped Crusader responds, "What about Robin?" Catwoman has the perfect answer. "I'll have him killed," she says, "painlessly! Well, he is a bit of a bore, with his 'Holy This' and 'Holy That'." And she's right. Like Spanky and Alfalfa forming The He-Men Women Hater's Club, Robin is the little boy who still thinks girls have cooties, the one who doesn't want to lose his buddy to icky old girls. And I can't be the only Batman fan who doesn't wish, at some point, Batman had the gumption to let this cat eat his canary.

Colón charts some of the changes Catwoman, aka Selina Kyle, has gone through, from her initial 1940 appearance as "The Cat" -- a bored socialite jewel thief -- to her '50s incarnation as a stewardess driven to crime after suffering amnesia, to the abused ex-wife of a rich man in the '80s, to a prostitute who dons the costume to get revenge on her pimp later in that decade. (The current Catwoman comic, written by Ed Brubaker and drawn by Javier Pulido, is a stark, visually flattened-out noir where Selina is having a torturuous love affair with a broken-down detective.)

Despite the greatness of all of these incarnations, it was Michelle Pfeiffer, in 1992's "Batman Returns," who created what (for me, at least) remains the definitive Catwoman. This Selina Kyle was a rumpled frump, the ditzy doormat secretary of an evil industrialist (Christopher Walken), reborn as Catwoman after her boss pushes her out of a window. In outline, it's the oldest feminist story in the book: the woman who asserts herself after being put down for too long. Pfieffer took the role into the stratosphere. This Catwoman was motivated by self-disgust as much as a desire for revenge. In one of the most shocking scenes in any American movie, Catwoman saves a woman from being raped in an alley and then turns on her. "You make it so easy," she says, dripping contempt, "always waiting for some Batman to rescue you." This was a heroine who might have sprung from one of Camille Paglia's more incendiary passages.

There were all sorts of delights to the performance, such as the moment everyone remembers when we first see Selina in her new vinyl get-up, purring to one of her beloved tabbies, "I don't know about you, Miss Kitty, but I feel sooo much yummier." Or the later moment when, using her bullwhip, she knocks off the heads of three department store dummies and then, turning the whip into a jump-rope, blithely skips away.

But the movie's greatest moments, the ones that make you wish director Tim Burton had had the good sense to cut everything with Danny DeVito as the Penguin, were the scenes between Pfeiffer and Michael Keaton. As Selina and Bruce Wayne, they engage in a slow dance of seduction. As Catwoman and Batman, all the longing and resentment, all of their desires to simultaneously dominate each other and submit to one another, come to the surface. And as the barriers of her two worlds start to blur, Pfeiffer conveyed a trembling, acid-edged, schizoid vulnerability.

Sadly, we never got the movie that the last shot promised, Catwoman rising again from the dead to hover over the Gotham City skyline. For a while there were rumors that Burton would be making a Catwoman movie with Pfeiffer. For the last few years, word has periodically surfaced that he is planning it with Ashley Judd (one of the few actresses who may have the malicious wit needed for the part).

Especially now, with the recent disappointments of the big cartoon movies -- the problematic, occasionally stirring "X2" and the overblown "The Matrix Reloaded," which evaporates hours after you leave the theater -- a Catwoman movie that would allow the character the space she deserves seems a great unfulfilled pop movie dream. There are greater villains than Catwoman, but few who have upset the stories they are introduced into in the way she consistently has, few who have made us question our allegiance to the hero in the way she does. The initial whiff of sex may come from that form-fitting costume. But it's Catwoman's embodiment of sex as a great disruptive force that holds the key to her erotic appeal. Standing up for everything good and decent seems a paltry vocation when you can throw yourself over the cliff with her.