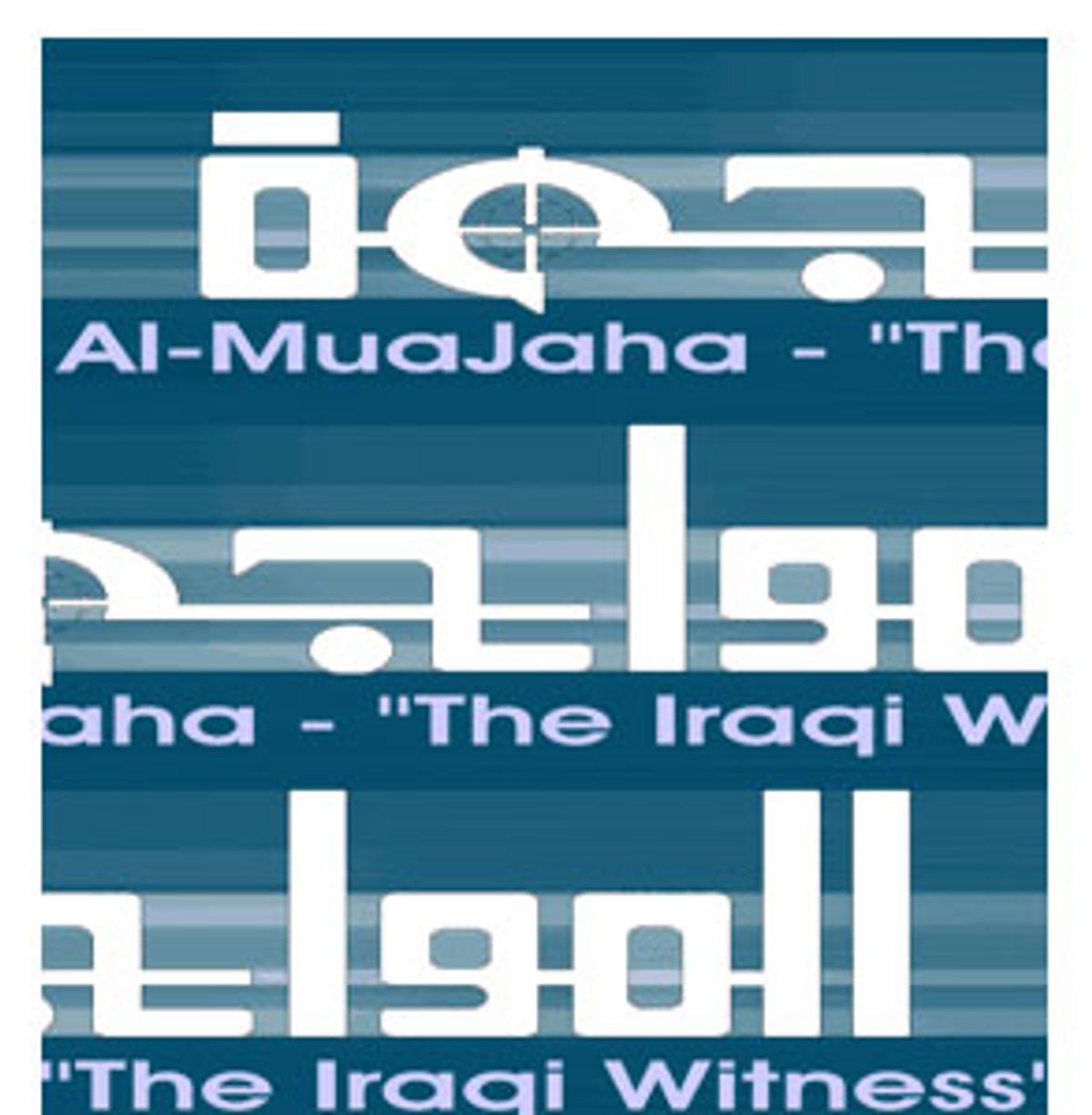 Iraq's only independent newspaper is run by high school and college students out of an alcove in the lobby of Baghdad's Al Fanar Hotel. Working with a $5,000 grant from the nonprofit peace group Voices in the Wilderness, 14 unpaid writers, editors, photographers and publishers labored for a month to create the debut issue of Al-Muajaha, the Iraqi Witness, which hit the streets a week ago. In its pages, budding reporters and essayists examine the violent, chaotic but cautiously hopeful world being born around them, expressing outrage at the Americans even as they revel in their newfound freedom.

Newspapers have proliferated in postwar Iraq, but most are the organs of political parties. Al-Muajaha's staff, though, treasure their autonomy. They learned journalism during the war, working as translators and fixers for the legions of foreign reporters who descended on Iraq. Some of them have been interview subjects as well, and they studied the way professionals found their angles and formulated their questions. Now they're turning these new skills back on the Americans, demanding accountability from their would-be rulers.

Three thousand copies of the first issue have been printed (there will be 5,000 of the second), selling for 250 Iraqi dinars each, about 25 cents. There's a single ad, bought by the father of one of the writers. But Al-Muajaha's creators, who are also publishing online, have great ambitions for the paper. As a statement on the editorial page says, "We aim to help the world understand Iraq, and to help Iraq understand the world."

Published in both Arabic and English, Al-Muajaha mirrors the conversations heard everywhere in Baghdad. Its three big subjects are security, Saddam's crimes and America's motives. The lead story is a first-person tale of being carjacked in a taxi near the Palestine Hotel. "For now I feel I'm not living in a city, but in a jungle of buildings and man-beasts," writes Salaam Talib Al-Onaibi. Another piece profiles the Committee for Free Prisoners, an organization that has combed through Saddam's vast prison files to try to provide families with information on disappeared loved ones. Inside, there's a list of American companies awarded contracts in postwar Iraq, capsule bios of American officials involved in the reconstruction, and reprints of egregious quotes by people like Defense Secretary Donald Rumsfeld and ex-CIA chief James Woolsey. The kids who produce Al-Muajaha have been able to talk openly about their country and their lives for only a little more than a month, and they have no experience of a free press, but they have an intuitive ability to capture the mood of the streets in their two-color pages.

Of course, the mood on the streets is conflicted, and Al-Muajaha reflects the disoriented, ever-shifting view many Iraqis have toward their liberation/occupation. Amanj Husam Ferzali begins a series on the world's dictators by saying, "It's my first time, ever, to write in public, being shy to express my thoughts. I'm confused, trying to answer the question: what do the people want?"

The estranged son of a privileged family, Rabi'a is the lead singer in a heavy metal band called Acrassicanda -- Latin for Black Scorpion -- and speaks flawless English. With his teen-heartthrob face and his bleak view of the world, Rabi'a is the kind of teenager Western journalists understand, which may be why he's been interviewed so frequently by MTV, Der Spiegel, ABC and others. Last year, he was part of the documentary "Bridge to Baghdad," in which a group of Iraqi students held a dialogue via satellite with a group of young Americans. During the war, Rabi'a put his familiarity with the media to work, hiring himself out as a translator for the London Independent, CNN and Radio France.

Rabi'a's not proud of the first "Bridge to Baghdad" (he has since taped a second, postwar episode), because he had to be so dishonest. He says that Houda Saleh Amash, the only woman among the 55 Iraqis most wanted by the Americans, sat right in front of him as he spoke. "I was really angry," he says. "We had to pretend we were dumb. Either you're going to answer the question, which is impossible because you're going to lose your head, or pretend you're dumb and you don't understand the question and answer another question."

Yet that show led to other exposure, and his experience with the media has helped him enormously as a neophyte journalist. "When you hang out with the press, you learn a lot of things," he says. "Which side of the story to put the light on, how you can get information by asking the right kinds of questions."

After the war, Rabi'a went to the Al Fanar, which sits in back of the journalist-overrun Palestine Hotel, to look for work with the media. There, he ran into Ramzi Kysia, a 34-year-old volunteer with Voices in the Wilderness, a Chicago-based nonprofit that deals exclusively with Iraq issues. Kysia said Voices was interested in helping to start a newspaper, and Rabi'a said, "I'm in, definitely!"

Voices in the Wilderness provides funding and Kysia helps the paper's staff with English translation, but the direction of the paper is entirely up to the Iraqis who work on it. Rabi'a points out that editorial meetings are held in Arabic, which Kysia doesn't speak. Sixteen-year-old Majid Jarrar, a friend of Rabi'a's, negotiated the paper's contract with a Baghdad printing press. He also does most of the layout, takes pictures, and reports -- in the first issue he had a story about Iraqi Palestinians evicted from their homes after the war, and now he's working on a piece about the Free Iraqi Fighters, the militia organized by the Iraqi National Congress's Ahmed Chalabi.

On Wednesday, Jarrar and Rabi'a headed out to report a story on the vices that have burst out into the open since Saddam's fall. Baghdad's dirty movie theaters once showed B-grade beach pictures, but now feature real nudity. Hardcore VCDs, once contraband, are sold openly in shops throughout the city. Public consumption of alcohol used to be illegal, but now men hawk bottles of liquor from roadside stalls.

Heading to the Roxy Theater, Rabi'a, who wears an Iron Maiden T-shirt and an HBO cap, asks the driver to play a gothic metal tape by a band called Moonspell. Jarrar, wearing an NBA hat and a Calvin Klein belt, objects -- he wants to listen to the rock group Nickleback. Westernized as they seem, though, they're worried about America corrupting their country. "Now even a 13-year-old child can buy a bottle of whiskey or rent a sex movie," says Rabi'a, appalled. "I'm really anti-tradition," adds Jarrar, "but if I had to choose between our real culture or a new culture coming from the West, I'd choose the real culture."

At the theater, the two reporters seem surprisingly assured. In the lobby, Jarrar takes pictures of pictures of buxom women in lingerie, while Rabi'a makes notes on the men who stumble by. "Most of these people are taking drugs," he says, adding that Valium and Xanax are popular. "All of them are drunk."

Outside, Rabi'a says, "This is not the same Iraq we were living in."

Al-Muajaha is a vehicle for them to make sense of the Iraq they've been thrust into. "When I read the newspapers in the market, they're all crap," says Jarrar. "You can't find any independent newspapers." Adds Rabi'a, "We just want our newspaper to be able to tell the truth."

For now, the newspaper is their lives. School started three weeks ago, but teachers' salaries haven't been paid and classes run only from 8:30 until 10 a.m. Rabi'a has only shown up twice. Two weeks ago he left home and has been crashing at friends' houses. Jarrar tries to go to classes four times a week.

Their real education is taking place in the city, where they're covering the remaking of their world. For his story on the Free Iraqi Forces, Jarrar has been interviewing people in the INC compound, the intrigue-filled headquarters of the men vying to lead Iraq. A few weeks ago, he couldn't even talk about Iraq's leaders. "It's strange, like I'm living in a dream."

It's something they say over and over again; there's a sense of incredible unreality to everything that's happening around them. "When I saw the statue fall on an Arab satellite channel, I thought, This is a dream, this isn't true," says Rabi'a. "When I realized Saddam Hussein was gone, I thought, We're going to break the chains around our necks. I thought, I'm going to make a concert in the street and sing heavy metal all day."

Now, as he runs around the ruined capital, that elation has evaporated. "We don't trust any government," Rabi'a says. "We don't believe someone good is going to rule Iraq. The truth is, even if it was me who was going to run Iraq, I wouldn't trust myself. We can't trust anyone anymore." A sad sentiment surely, but also the reason Rabi'a is no one's propagandist.