"Oryx and Crake" by Margaret Atwood

In her latest foray into speculative fiction, the novelist turns the satire of decadent capitalism way up, and depicts an apocalypse brought on by genetic engineering and rampant corporate greed. 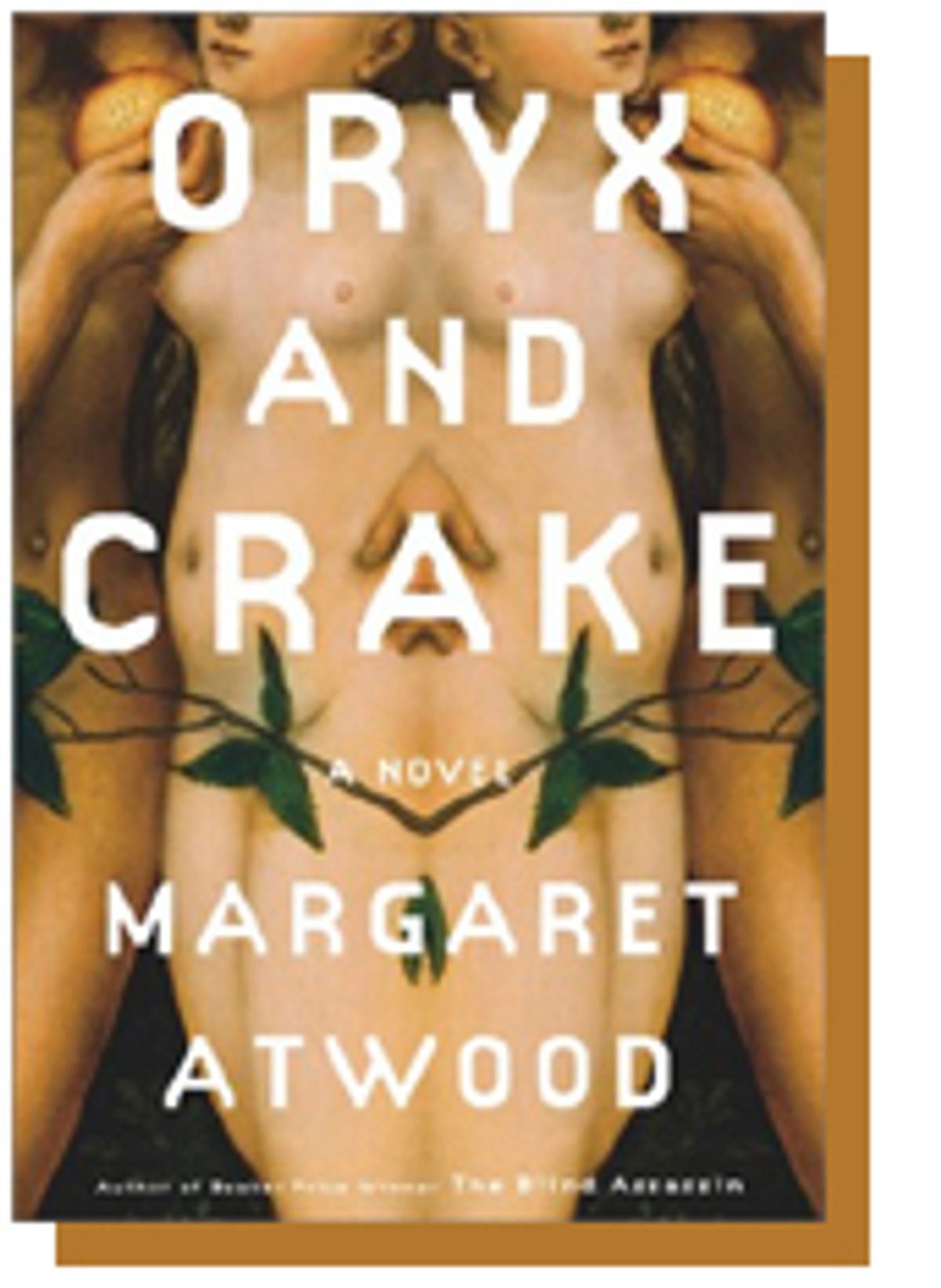 Margaret Atwood has always taken a jaundiced view of human nature. Back when her mordant observations about marriage and other relations between the sexes had her marked down as a feminist, she took pains to fire off several novels in a row featuring weak, manipulative, dishonest and outright bad women, partly to prove that her skepticism was distributed fairly. She has always been of the opinion that people are a mixed bag of the occasionally decent and the frequently mendacious and that there's not much anyone can do to change that fact.

With "Oryx and Crake," her newest novel and a foray into the realm of speculative fiction much like her 1985 hit, "The Handmaid's Tale," Atwood contemplates the possibility that we soon might be able to do just that: alter human nature. It's a novel spurred in part by recent developments in genetic engineering and species design, some of which (like the splicing of spider genes into goats in order to transform their milk into a superfiber) are milestones of the past for her characters. Perhaps "character" would be more accurate, since her hero, Snowman (formerly known as Jimmy), is the last man on earth.

Sort of. Snowman lives on the outskirts of a village inhabited by a placid people who eat grass, are impervious to the brutal, unfiltered ultraviolet radiation of the sun and have no facial hair. They've got some pretty strange, if ultimately highly practical, mating habits as well. These are the Crakers, and they're not human, or not quite. They're the creations of a master genetic engineer named Crake, who was once Snowman's best friend, back when Snowman's name was still Jimmy. "Oryx and Crake" alternates between memories of Jimmy's youth and early adulthood in the dystopian world where he and Crake grew up and an account of Snowman's efforts to survive in the environmentally devastated and creepily unpopulated (unless you count the Crakers) world it has become.

"Oryx and Crake" is itself a mixed bag, but like most middling Atwood novels, it's still more entertaining than many other writers' best efforts. An average schlub (Crake calls him a "dull normal") whose very lack of exceptional talent or intelligence makes him a good custodian for the Crakers, Jimmy doesn't seem to kindle Atwood's interest as much as the oddballs she usually picks for protagonists. Crake and Oryx, a former child prostitute that both men seem to love, are more intriguing, but far enough beyond Jimmy's ken that they can't be clearly seen. Character isn't this novel's strong suit.

Instead, it offers a cascade of Atwoodian jokes and riffs on the preoccupations of late capitalism; she takes our already wanton society and turns the decadence up to 11. Crake and Jimmy squander their adolescence holed up in their rooms, smoking pot and playing games with titles like Extinctathon and Barbarian Stomp ("Jimmy could sometimes win at Kwicktime Osama ... as long as Crake played the Infidel Side"). They also troll the Web, checking out porn sites like HottTotts, which shows "real sex tourists, filmed while doing things they'd be put in jail for back in their home countries," and other assorted vile spectacles: "animal snuff sites, Felicia's Frog Squash and the like," "hedsoff.com, which played live coverage of executions in Asia," and the self-explanatory deathrowlive.com.

They savor these delights from the security of elite corporate compounds (the lesser mortals live outside, in what's left of the cities, now called "plebeland"). Absent any greater governmental authority, public life is a free-for-all of industrial sabotage, and as a result most livestock has been killed off by either environmental degradation or deliberately planted diseases. People eat SoyOBoy burgers and Sveltana No-Meat Cocktail Sausages. Crake, a genius, goes off to work at the Watson-Crick Institute, which creates something called a ChickieNob, a "large, bulblike object" that turns out to be a chicken consisting of nothing but breasts. Jimmy gets shunted off to the hilariously decrepit Martha Graham Academy, where what's left of those who care about the arts huddle behind a "gruesome statue" of "some gory old dance goddess of the 20th century who'd apparently mowed quite a swath in her day."

While this retrospective story line winds its way to the apocalypse that has depopulated the world, Snowman decides to make the perilous journey to a deserted compound in search of supplies. This quest makes for a fine little adventure story, complete with confrontations with feral pigoons and wolvogs (genetically modified pigs and dogs) and hairbreadth escapes. These aren't the kind of scenes you expect from an upscale literary novelist like Atwood, and they're expertly executed. The author's tendency to understate her novels' deepest questions -- Is Crake evil or the planet's benefactor? Are the Crakers really an improvement on humanity? -- makes "Oryx and Crake" seem lighter than it is, a semi-frothy amalgam of social satire and ripping yarn. Yet the world it postulates is so much more plausible than that of "The Handmaid's Tale" it would be foolish to laugh it off. The joke might turn out to be on us.

Our next pick: A social comedy about a male friendship beginning to sour, and what happens when one man's wife gets involved