Conservatives want America to return to the Doris Day era. But as the films "Far From Heaven" and "Down With Love" prove, those days are so gone, the only thing left to do is make costume dramas about them. 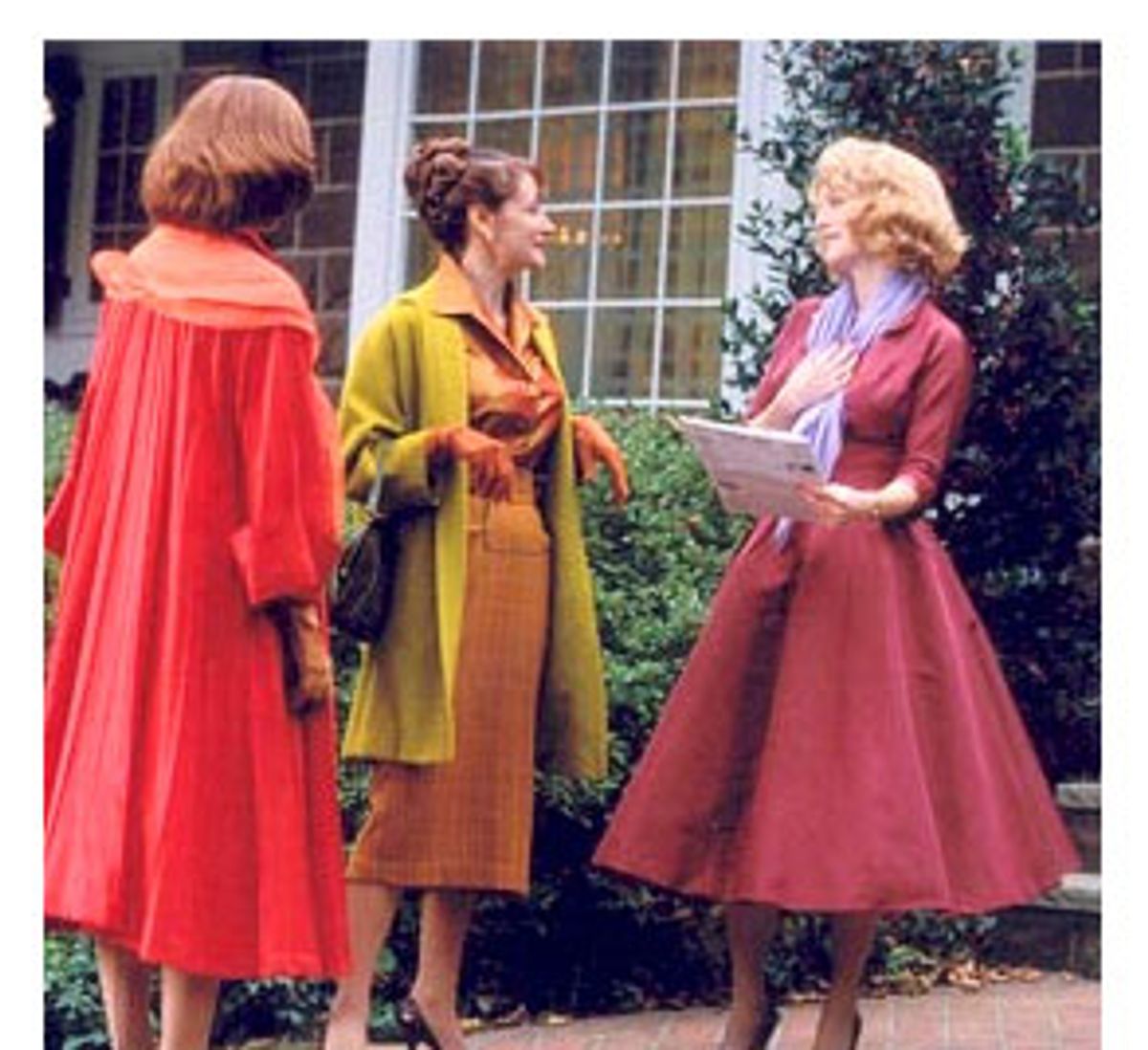 Few recent movies have had such wildly different effects on their audiences as "Far From Heaven" and "Down With Love." Most people either loathed or adored Todd Haynes' reverent recreation of the glossy melodramas of the 1950s. I've heard filmgoers rave about Peyton Reed's pop homage to Doris Day's early '60s sex comedies, and others say they walked out in disgust. And some people are simply baffled by both. "But what exactly is it trying to say about the '50s?" a friend of mine wailed in the middle of a conversation about "Far From Heaven," complaining that it left him cold. "It would have been better if the characters had been even remotely believable," said another friend of the same film.

Of course, neither film is meant to be believable; they're exercises in cinematic technique, tributes to types of movies that no doubt seemed a bit implausible back in the era when they were made. And yet even the much lighter and less subtle "Down With Love" is about more than just pillbox hats and process shots; there's a whiff of yearning behind the spoofery, but only a fool would write it off to nostalgia or a wish to return to simpler times. You couldn't call these movies parodies, really, but it's hard to accept them as sincere either.

Both "Far From Heaven" and "Down With Love" seem, well, weird. You could blame that on their being so highly stylized, but when was the last time anyone found the artificiality of "The Importance of Being Earnest" unsettling? Or, for that matter, the ritualized theatrics of "Throne of Blood"? We can easily accept that none of the characters in Oscar Wilde's play or Akira Kurosawa's fusion of "Macbeth" with Japanese Kabuki act like anyone we've ever met, because the worlds they inhabit are so remote. Audiences buy piles of tickets to Merchant-Ivory movies and don't walk out fretting because they can't figure out what the filmmakers are trying to say about Victorian society. The problem seems to be that we aren't ready to put mid-20th-century America in the same category.

What makes these two movies aesthetic flash points is that they're about the '50s. (OK, "Down With Love" is set in 1962, but pointedly before the Kennedy assassination, the arrival of the Beatles, and perhaps more significantly given the movie's preoccupation with the battle of the sexes, the publication of Betty Friedan's "Feminine Mystique." The movies Reed is riffing on belong to a world that's decidedly pre-counterculture, the '50s in their hearts if not by their calendars.) And, as my friends' confusion suggests, we're still supposed to have something to say about the '50s. Or at least, some of us think we are, and that is exactly what makes the response to "Far From Heaven" and "Down With Love" so divided.

At heart, these two movies are costume pictures. Back when the costume picture was invented, it was the kind of movie in which, as one Hollywood producer put it, "the guys write with feathers." Costume pictures are eye candy, a visual feast of great outfits and alluringly lavish interiors -- or, in the case of "Far From Heaven," exteriors; were any actual autumn leaves ever so ravishing as the ones that set off Julianne Moore's auburn hair? The people in these movies don't behave or talk the way we do. Moore's character, a housewife at ease with her life except for her husband's sexually rooted detachment, scolds her kids for using language that doesn't even rate as cussing today. Out on the town in "Down With Love," Renée Zellweger and Ewan McGregor pose in front of a backdrop of neon nightclub signs and Manhattan street scenes, pretending to be taking in the sights.

In his endlessly delightful book "American Scenarios," film scholar Joseph Reed asks about costume pictures, "Why are they for us a kind of indulgence? Is it because they offer us the chance to be (even more than most movies do) innocent bystanders, offer a way of watching life-and-death moral and social actions, while remaining innocent of involvement ... They allow us to ... twitch a cape and thump a riding crop without responsibility for the great matters at hand on the screen."

At the time that, say, Douglas Sirk's "Magnificent Obsession" or Michael Gordon's "Pillow Talk" came out, filmmakers knew they weren't faithfully reproducing the world they lived in, but they surely didn't think their movies were entirely cut off from reality, either. The romantic travails and bourgeois aspirations of Sirk's characters touched on the dreams of their audiences, and if women in the 1950s were rarely as virginal as Doris Day, many of them thought they should be, or should at least appear to be. Both directors exaggerated (one for the sake of melodrama and the other for comedy) the social concerns and mores of their day, but they weren't making fantasy films, not, that is, making costume pictures.

And of course, both "Far From Heaven" and "Down With Love" hark on themes that would have been unmentionable in the movies of Sirk or Gordon. Homosexuality is the most prominent one, and that's not surprising when you consider that Rock Hudson frequently acted in films from both genres, including "Magnificent Obsession" and "Pillow Talk." Homosexuality is behind the cruel destruction of Moore's marriage in "Far From Heaven" and the subject of a jokey romantic misunderstanding between two supporting characters in "Down With Love." Furthermore, the chief dilemmas tackled in each film -- relations between the races in "Far From Heaven" and the sexes in "Down With Love" -- are still painfully difficult in contemporary life. Both films treat those questions in ways no '50s movie ever could have.

Nevertheless, neither movie feels obliged to take a clear-cut "position" on the '50s themselves. Compare the nostalgic view of that decade vaunted in TV's "Happy Days" or the critical approach in the 1998 film "Pleasantville," in which contemporary teens are magically transported into an oppressively wholesome black-and-white '50s sitcom world and gradually liberate it with the color of more up-to-date attitudes. According to "Happy Days," the '50s were good, an innocent, healthy time when kids drank milkshakes, danced at sock hops and went home to comfy nuclear families. In "Pleasantville," the '50s were bad, stultifying and conformist.

You could say that the visions of the '50s offered by both "Happy Days" and "Pleasantville" aren't any more realistic than those in "Far From Heaven" and "Down With Love." And you'd be right. But unlike the two more recent films, "Happy Days" and "Pleasantville" take definite stands on the decade: for and against, respectively. "Far From Heaven" and "Down With Love" remain ambiguous. Crushing and wrong as the racism that ruins Moore's second chance at happiness may be, she's barely aware of it until her marriage falls apart. She's not one of Friedan's restless housewives, worn down by the "problem that has no name"; the trouble she senses within her husband is the only real cloud in an otherwise satisfying life. Before the fall, hers is a gracious, lovely, orderly world, not the soul-sapping monochrome limbo of "Pleasantville."

Likewise, the New York City of "Down With Love" is a candy-colored never-never land of great outfits and glamorous apartments, where the only thing holding a girl back from making it to the top of the business world are the pesky entanglements of romance. Zellweger's character is more Helen Gurley Brown than Doris Day -- she wants to have attachment-free sex with McGregor, but in order to execute a complicated scheme, he fends her off. She anticipates no negative consequences and runs into few obstacles in pursuing worldly success and premarital nookie. What she'll do after she marries remains something of a mystery.

Again, the '50s in question here aren't the actual decade -- as historians have pointed out, in reality those years saw upsurges in working wives and single mothers and extramarital sex. No, this is "the '50s" as a cultural totem, the fetish of an idealized society composed of married, church-going, heterosexual couples living in tidy suburban homes and raising fresh-faced kids who rode their bikes to school, attended all the football games, and married as virgins. It's the notion of American life conjured up by the expression "family values."

This vision of the '50s has always been a political one, a lodestone for American society, and for many people it continues to be. For such viewers, a movie like "Far From Heaven" must either agitate for a return to that nonexistent way of life, or point out that it was, indeed, far from heaven. But to filmmakers like Haynes and Reed, the '50s, the world on the cusp of civil rights and feminism, is just an interesting setting, a great way to throw virtuous sympathetic characters into conflict with their world. The social order that tortures Moore's angelic character in "Far From Heaven" gets treated like the one that destroys Edith Wharton's Lily Bart or Thomas Hardy's Tess; we all know it's wrongheaded, but it's long gone anyway, and besides, it makes for a helluva story. The fate of Henry James' Isabel Archer, for example, would be far less moving if she could summarily divorce the dreadful man she marries in "The Portrait of a Lady." The stuff of tragedy would devolve into a few hundred dollars in legal fees.

Yet we don't interpret Isabel's story primarily as a protest lodged against the mores of her day, just as we don't cry any less at "King Lear" out of reservations about the monarchy; instead, we consider it a timeless tale of human fallibility and loss. That's because Isabel's world is gone. And by making costume pictures set in the '50s, lingering over the accoutrements of the period as if over the drawing rooms of Brideshead or gleefully romping through glistening and shamelessly bogus "New York street scenes," Haynes and Reed are saying that the '50s, too, are gone. Over. As irretrievable as the drawing rooms of Jane Austen's England and the plantations of Scarlett O'Hara's Georgia. If not everyone in America is ready yet to recognize this, that doesn't make it less final.

In their oddball, covert way, both "Far From Heaven" and "Down With Love" make a more radical assault on the fantasy of the '50s than more overt attacks like "Pleasantville" do. They say to us: We're never going back there. It's not an option. So let's play dress-up because now that is all this will ever be -- a game, a performance, a show, a costume picture. The '50s are finally dead.