Waiter, whose hand is that in my sashimi?

Dinner in the Dark, yet another Manhattan mating trend, brings together swinging couples, sexy singles and pitch-black dining, complete with waiters in night-vision goggles. 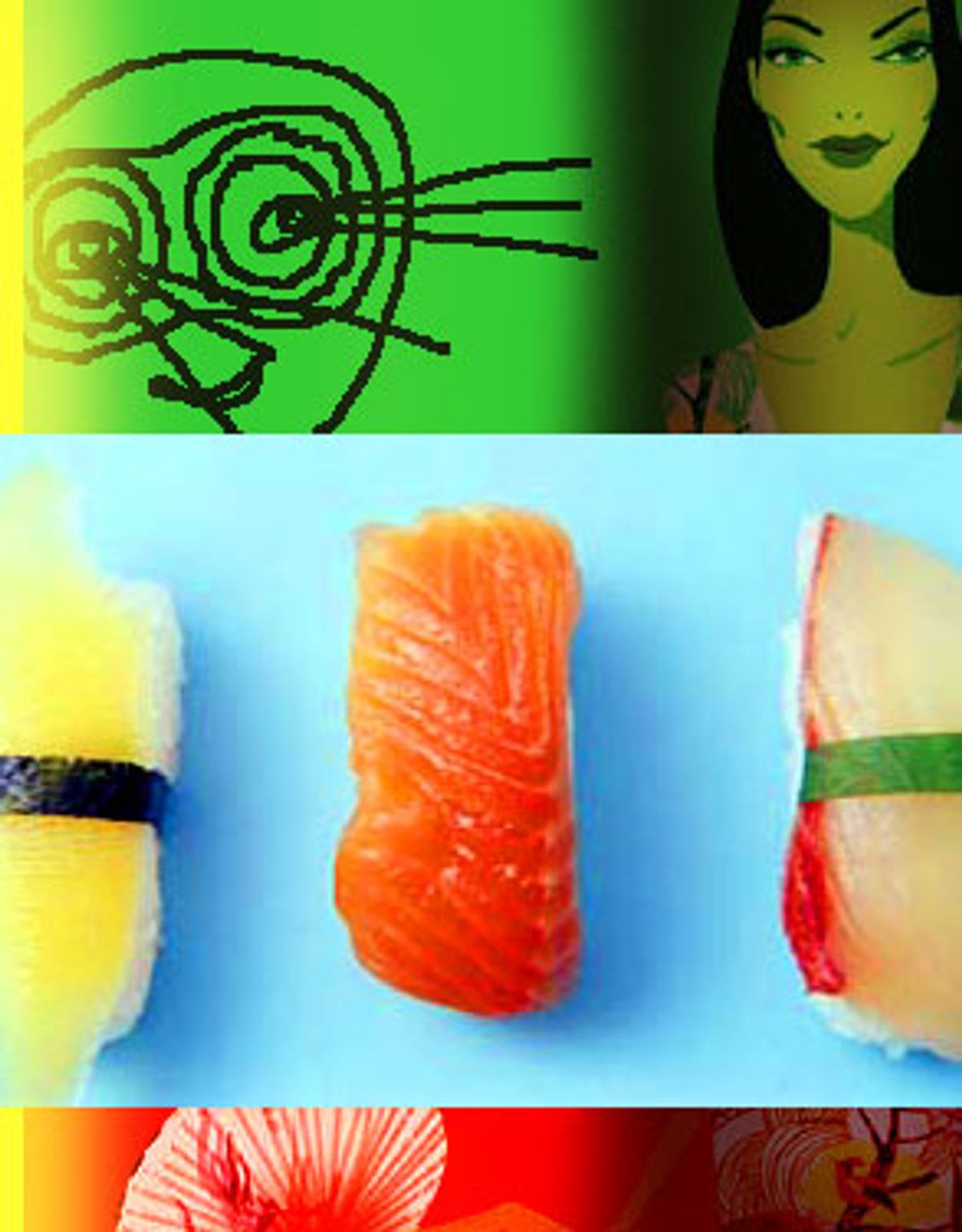 Finally, someone has figured out a way to use night-vision goggles to make love not war. Which doesn't -- quite -- explain why the first thing I see upon entering Dinner in the Dark, a play date for the Manhattan urban professional set, is a camera crew from Israeli television. Perhaps it's a slow news day in their home country?

Like Speed Dating before it, Dinner in the Dark is the latest gimmick in the high-stakes world of urban mating. The brainchild of party promoter Cosmo Party, Dinner in the Dark is a four-course dinner at a hip restaurant, held in complete darkness. The waiters wear night-vision goggles, leaving the guests free to eat with their hands, throw food, get naked, make out with strangers, or trade stock tips. The idea is that the dark will enhance all manner of sensual pleasures; Cosmo Party advertises it as a chance to "arouse your senses, smell the spices, speak to faceless voices."

It's sort of a singles event, but couples are welcome as well. Given that the organizers are French, presumably it is perfectly acceptable, perhaps preferable, to borrow another's date in the dark. When I called to make a reservation, Jerome Chasques, Cosmo Party's founder, requested in his inimitable Gallic manner that I bring a young man as my escort. Apparently, the girls far outnumber the boys on this particular evening and it is crucial to keep the numbers balanced.

The idea of going unprotected to an event where anonymous paramours are encouraged fills me with titillation mixed with dread. So I borrow my friend's beau, Jason, for the occasion. He's the perfect prophylactic: He's cute, he's 25, he loves to cause mayhem, and he's madly in love with a good friend of mine.

We arrive at Suba, in Manhattan's Lower East Side, at 7 o'clock on a Tuesday night. Right off, the Israelis, who work for a tabloid magazine show, shove cameras in our faces and want to know what we are wearing and how much it cost. Jason explains that he bought his powder blue Western shirt at a thrift shop. I'm wearing all black, in washable fabrics. Many of the other guests -- most of them in their 20s and 30s and looking like they've come straight from the office -- seem indifferent to dry-cleaning costs. They are in little black dresses, crepe skirts, crisp suits and perfectly pressed white shirts. As we mingle with our mojitos -- the lights remain on during the cocktail hour -- we decide that the three most attractive people in the room are all employees of Cosmo Party. This seems terribly unfair. We debate the ethics of groping a host in the dark. We decide it's probably OK.

Jason and I gulp down our second mojito before we realize just how difficult bathroom breaks will be in complete darkness. Because we are too busy making a last-minute dash to the loo, we lose all hope of strategizing our seating arrangements. We meet at a heavy velvet curtain where bug-eyed waiters take us by the arm and lead us to our seats.

In the private dining room downstairs it is blackest night. We reach to each side, stretch our hands across the table, engage in a futile search for cutlery. The waiters buzz past with flashing green eyes like fireflies. You can't see a goddamn thing.

Well, for about three and a half minutes. That's how long it takes for a guest a few seats away from us to start flashing the room with light from a cellphone. You've got to admire the chutzpah: Pay $90 for a novelty event, only to annoy everyone around you by breaking the rules. A month ago, we would have all been lighting up cigarettes, but that was before Mayor Bloomberg's ban, so we are mercifully spared the danger of dodging our dinner companion's flames in the dark.

Instead, we get to guess what the hell we are eating. The first course put in front of us ("on your left," the waiters inform us helpfully) is round and crunchy and filled with seafood. "Try the dipping sauce," someone calls out. That's easy; I've already inadvertently dipped most of my right hand in it. I lick it off. What else to do?

Fifteen minutes into the dinner, Jason decides he has had it with the enemy now dubbed Cellphone Boy, and leaves the table. He claims he is going to take advantage of the cover of the dark to beat him up and steal his phone.

To amuse myself in his absence, I strike up a conversation with the people whom I'm guessing are sitting right across from me.

The man is French, which seems exciting until I discover he is not one of the organizers we spotted upstairs. He donated the champagne, and in turn, he and his girlfriend got in for free. She is a journalist.

She used to work for Ms., she tells me, but now she is unemployed. She wants to know who I write for, and what editors I know. By the time we are swapping gossip about the recent shifts of editors in chief at Ms., I become deeply depressed. Why spend an hour and a half in the dark replicating the conversations I have over IM each day with the rest of my unemployed magazine friends?

So when I recognize the green glowing eyes of a passing waiter over my shoulder, I grab him. "Hey," I say. "I'm a journalist. Can I borrow your goggles?"

The waiter suddenly becomes very offended. "What, you don't recognize me?" I start to point out that, in fact, I can't see my own hand in front of my face. But the waiter stops me. "Amy! It's me!"

It turns out one of the many rules of journalism is that amateurs do it best. That "waiter" happens to be Jason, who, in an effort to help me with my story, has figured out how to finagle goggles out of the waiters. (He decided against beating up Cellphone Boy when he discovered it was Cellphone Girl.) He leads me back to the corner where a blind waiter is passing dishes in the dark. And the waiter agrees that yes, in the interest of journalistic accuracy, I can take my turn as the sighted among the (hopefully) naked.

Finally, I will see what scandals are passing before my blind eyes. I'm hoping for sex, nudity, strange uses of condiments. Surely not everyone in the room is patiently picking at their tuna tartare and talking about what they read in the Times Arts & Leisure section over the weekend.

I put the goggles on. (They are surprisingly, dangerously heavy.) Everything is green. And everyone is seated. In my five minutes of omniscience, I see few things that would be out of the ordinary in any dining establishment (save the obvious disregard for utensils). There are a few arms resting on neighbors, a few kisses here and there. The most scandalous display appears to be taking place on an elevated platform to the left of the tables where a couple is kind of sort of making out, but even that wouldn't raise eyebrows in the light.

After strategically using my gift of sight to locate the stray bottles of wine, I return to my seat, goggleless, only to accidentally steal the wine glass of the person sitting to my left. When he begins to complain loudly, I make a desperate, ultimately futile search for the bottle I know I put right here, there, somewhere. It's hopeless. I go back to eating my sticky-sweet salmon, flake by flake, and licking my fingers.

And then comes the parade of candles. As the evening winds down, the waiters dash in to illuminate our activities. They encourage us to look around. The good-looking couple across from us looks like a parody of a Manhattan couple in their early 30s: He's blond and wearing a blue Oxford cloth shirt; she has dark shoulder-length hair and is wearing a black cocktail dress. But the boy sitting to my left turns out to be the most attractive one in the room (besides the French organizers, of course). and I've stolen his wine. He's spent the entire dinner with his head in his girlfriend's lap, or so he tells us (without explaining what exactly he was doing there).

Over after-dinner (outdoor) cigarettes, there is a definite swingers vibe all around. One couple asks us what we are doing later that night. ("Visiting Jason's girlfriend," we say.) The attractive boy and his girlfriend invite us to go samba dancing with them sometime.

Then Jason shows me up once again by bribing the waiters to meet us at the restaurant where his girlfriend works, promising them bottles of wine. We are hoping that they have seen things we have not, that they will tell us tales of debauchery with food and sex. Alas, there is none of that. They admit that this was one of the tamer evenings (Cosmo Party has hosted 10 Dinner in the Dark events since December 2002, and two are planned for early June.) There was a food fight at the last Dinner in the Dark. There are usually many back rubs and some groping. But nothing too scandalous. They, too, saw the couple making out on the stage. And that turns out to be the most shocking revelation of the evening.

It turns out the make-out couple was part of the Israeli camera crew.