Just say no to supersized media 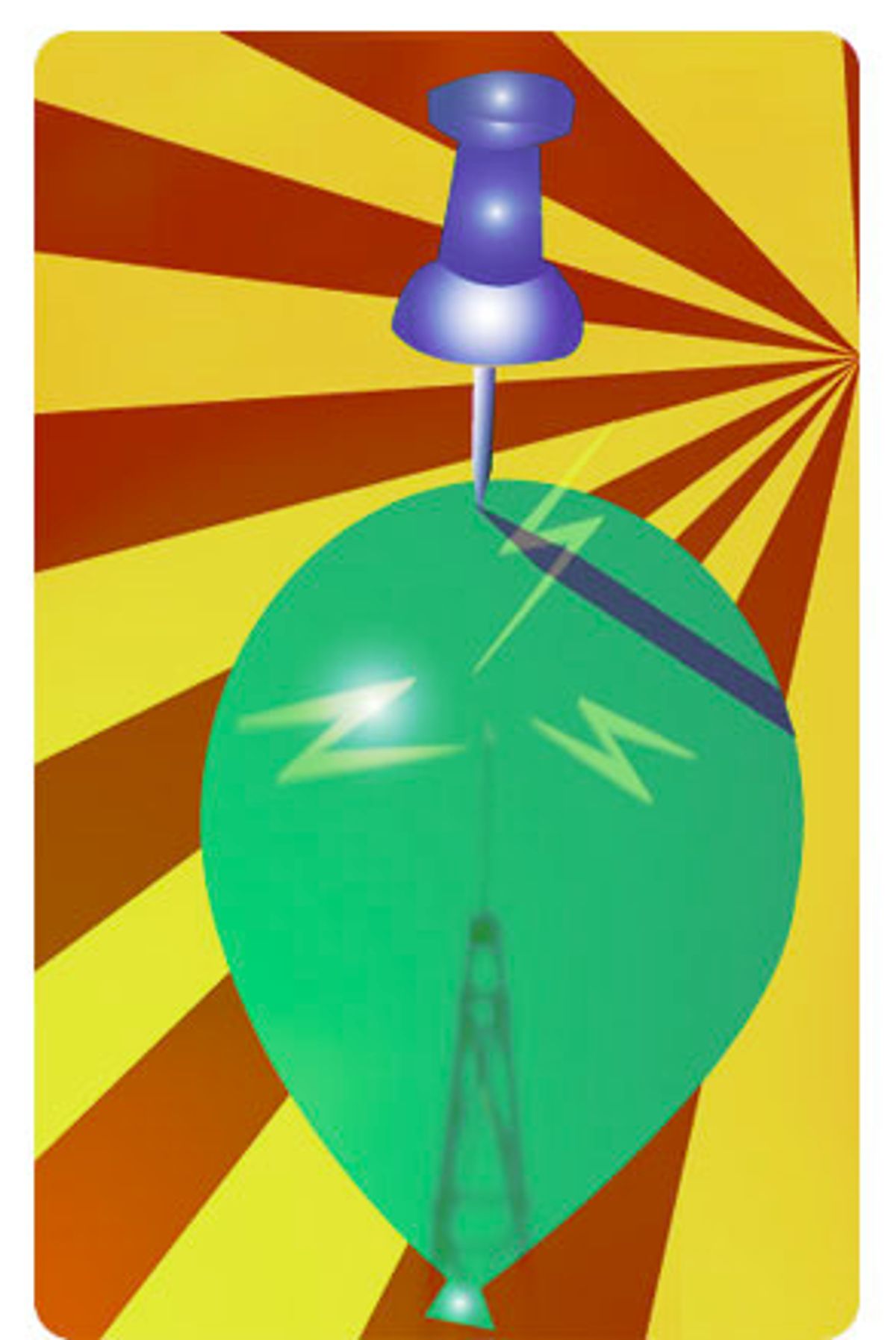 Atlanta has dubbed itself "the city too busy to hate." We are a city of people too harried to do anything much except go to work, fight traffic, pick up some franchise takeout, rent a DVD, and go home. Atlanta is a fragmented and disconnected city where pods of commerce are linked by highways choked with people driving SUVs and talking to themselves, cellphone wires dangling from their ears. It is not a city where we often get together to talk about the future of our democracy.

But on Wednesday, May 21, some Atlantans did just that at an unsanctioned Federal Communications Commission hearing attended by two dissident FCC commissioners, members of the alternative press, local activists, and 600 very worried U.S. citizens. The attendees assembled to register their opposition to the tsunami of media consolidation -- and subsequent loss of real news reporting -- they fear the regulatory commission's June 2 rule change will unleash.

The meeting was the last in a series of unsanctioned protest hearings convened by FCC commissioners Michael Copps and Jonathan Adelstein to provide a forum for public comment on the impending rule change.

What was most striking about the hearing was how much the people who attended cared -- from the commissioners who have been touring the country to warn the American people of the impending deregulation to the hundreds of Atlantans who spent four hours sitting in hard pews in a drafty church on an unseasonably cold and rainy May night waiting for a chance to make their voices heard.

Copps and Adelstein began the proceedings on an ominous note: "We are on the eve of the most sweeping and potentially most destructive overhaul of ownership laws in the history of American broadcast -- and most people have no idea what's about to happen to them and their media," Adelstein said.

"The FCC is about to supersize the media," he said, explaining that the rule changes will allow existing Big Media corporations to get even bigger, at the expense of the American people.

But when asked how the American people can prevent the loosening of media cross-ownership restrictions, Adelstein said that the chances of stopping the FCC on June 2 are very slim. What's more, he added, once companies merge, the FCC cannot make them unmerge; only an act of Congress can do that.

Nevertheless, he urged his listeners to keep protesting the changes. "The entrenched media in Washington is very powerful," he said. "And we've seen small entrenched interests override the interest of the American people time and time again. But our democracy is at stake."

In the course of these hearings, Adelstein said, he's found that people have "zero interest" in seeing media companies grow bigger. "I suspect that Americans have an instinctive and deep hostility to Big Media. It's against what we're about -- it's not in the public interest."

"Use the airwaves in your interest and not in the interests of companies that profit by using them," he exhorted the crowd, which responded with thunderous applause.

Dozens of people lined up to testify after the main speakers had finished, voicing their concerns with passion and urgency.

"My name is Doris Bennett and I'm 77 years old. I can't sleep at night because I'm so worried about this country," said one. "If this happens, we will never be able to elect who we want to elect in this country, because the media will elect them. I would like to say to Mr. Powell that if you do this, I will turn off my television and my family will turn off their televisions."

A 50ish Iranian-born man who is now a U.S. citizen fervently expressed his opposition to having giant media corporations control the U.S. news. "I worked 23 years in a big corporation. There is no democracy in a corporation," he said, his voice shaking with emotion.

Rose Sanders, a civil rights lawyer, made the 220-mile drive from Selma, Ala., through a driving rainstorm to share her experience as the owner of a small local radio station. She and her husband had bought the station, she explained, to provide a progressive black voice on the dial. However, the station's signal went out after they broadcast their endorsement of whom Sanders termed the "less conservative" of two candidates, both black, in a hotly contested mayoral election. Subsequently, the station's tower was firebombed, she said.

Gains from the civil rights movement provide the appearance of greater democracy in the United States than in the '50s and '60s, Sanders said, but "there is no tolerance for voices of dissent in this country." In an impassioned speech, she charged that Big Media wants to squelch any oppositional progressive voices and "they want to use [the FCC] to do it. They won't have to tear down every station if they can get [the FCC] to allow them to buy them up instead."

Another citizen voiced the widely held concern that the interests of Big Media are not those of the public. If Big Media is doing the reporting, how can citizens find out when it acts against the public interest? "NBC is owned by General Electric. As someone who is concerned about the environment and public health, I'd like to know how G.E.-owned media covers issues like environmental degradation, PCBs, and other persistent environmental pollutants," he said.

While speakers repeatedly advocated for a diversity of voices and viewpoints in media reporting, the crowd itself lacked the more buttoned-down elements of the city's population that would bespeak true diversity. There were no obviously suburban-looking types, and not one of the 600 or so people there, at a meeting that started at 6 p.m., was wearing a suit (except for the two commissioners, who were, after all, FCC bureaucrats, and one other panelist).

The speakers' unanimous agreement that Big Media is bad for democracy irritated at least one citizen, overheard grousing outside that the hearing was nothing more than a pep rally against the rule change. "I thought there'd be some argument -- some people here for the change," he said, although on questioning he admitted that he too was against deregulation. Any Atlantans against the rule change either didn't know about the hearing, didn't care enough to attend -- or, perhaps, didn't exist.

The narrow, albeit eclectic, demographical turnout made sense, given that the hearing was publicized only in the city's alternative weekly, Creative Loafing, and by two community radio stations, WRFG and WRAS. Every person polled had learned of the hearing from one of those sources. Suit-wearing, corporate-job-holding readers of the mainstream press and listeners of mainstream airwaves might have felt a stake in the proceedings as well if they'd known about the event.

Even right-wing types might have cared to attend, as evidenced by the National Rifle Association's support for Copps and Adelstein's drive to preserve the existing regulations. So why didn't local conservative talk show host Neal Boortz, an avowed libertarian, mention the hearing to his loyal troops? Possibly because his station, WSB-AM, is owned by media giant Cox Communications. Centrist and right-wing Atlantans did not learn of the hearing because their media outlets are owned, in large part, by the self-same Big Media corporations that want the ownership caps relaxed -- which is, of course, the very problem that the dissident commissioners are trying to publicize.

The lack of network media coverage added to the charming but eerie sense of being at a small town hall meeting instead of a nationally significant event with local import, given that Atlanta's radio and TV stations, as well as its newspaper, are owned by major media conglomerates (not to mention Atlanta's status as the nation's 9th largest TV, 11th largest radio, and 17th largest newspaper market).

In an odd act of hoisting itself with its own petard, the Atlanta Journal-Constitution chose not to report the hearing the next day but did print an editorial by William Safire that concluded: "Are [news broadcasters] not obligated, in the long-forgotten public interest, to call to the attention of viewers and readers the arrogance of a regulatory commission that will not hold extended public hearings on the most controversial decision in its history?" The Journal-Constitution apparently felt itself to be above the fray, with no obligation to call to its readers' attention the prior evening's unsanctioned hearing held in protest of the very lack of official hearings mentioned by Safire -- a rather strange position for a newspaper to take.

On Friday, the paper did run a story on Rupert Murdoch's testimony before the Senate Commerce Committee, below the fold on Page 3 of the business section. Buried in the middle of the story were two short paragraphs mentioning the Atlanta hearing.

The sorry example of Clear Channel (which dominates U.S. radio airwaves as a result of earlier FCC deregulation) suggests that these rogue hearings will go down as a meaningful moment in our nation's history. Are they the first rumblings of the silenced majority -- a reawakening of the populist spirit of the American people? Or are they its last dying gasp, as our sense of ourselves as citizens, not consumers, is finally swallowed up by free-market capitalism run amok?

Meredith Hobbs is a writer in Atlanta.