Blood on the lawn

Even in regular croquet, your average opponent will whack your balls to kingdom freaking come. But if that's not aggro enough for you, dare to play ... extreme croquet! 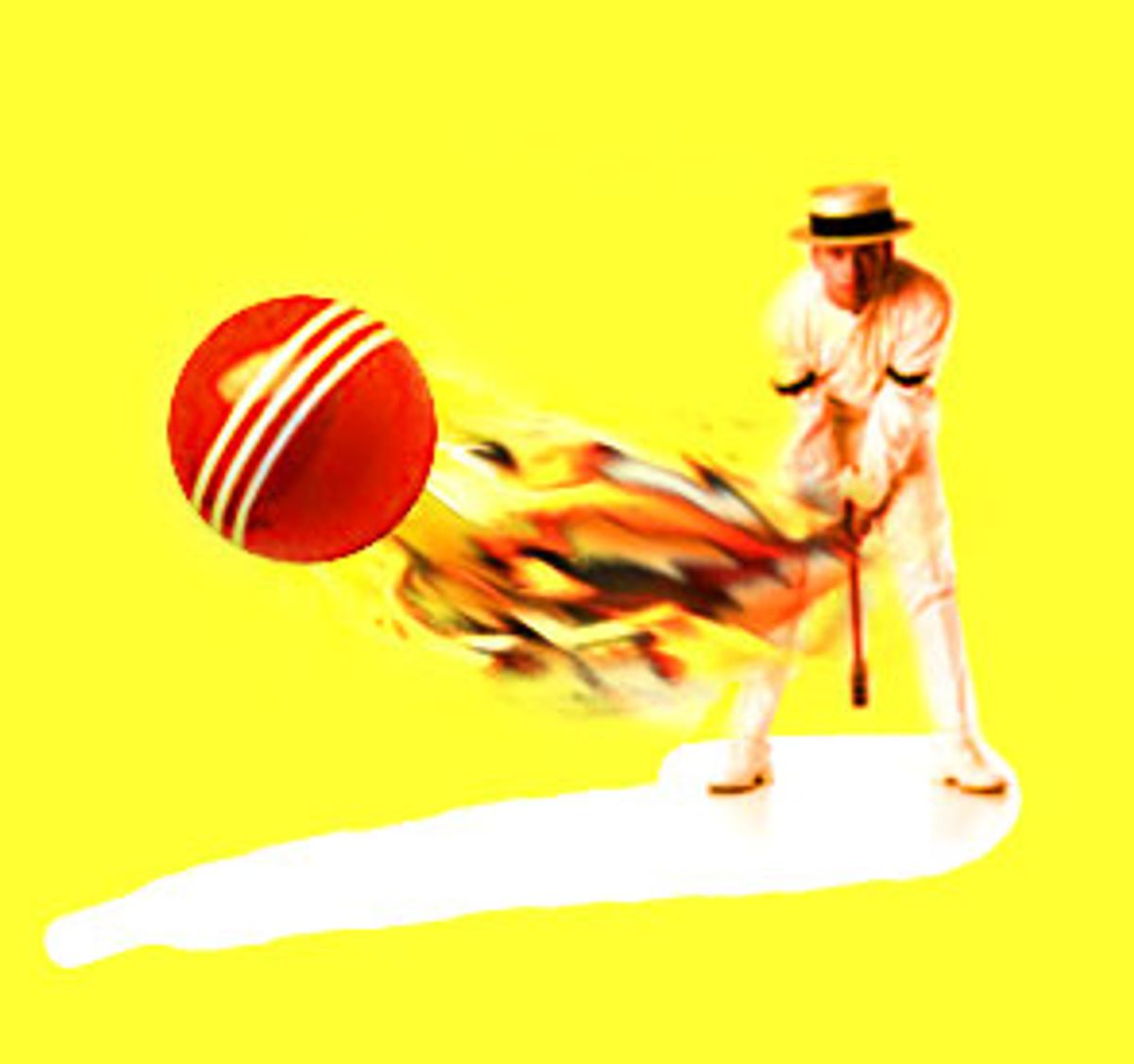 Until today, the most "extreme" thing I've ever done in Connecticut was sing a cappella. (Yes. I and my team of college women sang entire songs with no instruments whatsoever.) But today, I will outdo my extreme self. Today I am in New Haven, and I am going to play extreme croquet.

Croquet is, of course, cutthroat to begin with. No, really. While your average opponent might wear knickers and sip Lillet, he also has no qualms whatsoever about whacking your balls to kingdom freaking come. Many weekend wicket-heads have nevertheless decided that the classic lawn sport is just not aggro enough. So they've raised the stakes even higher, creating a brutal battle of the mallets they call -- yep -- extreme croquet. They play this updated, often improvised game in deep woods, drainage basins, gopher-pocked fields, or backyards deliberately trashed with car tires, lawn furniture and sprinklers (turned on). "We set up the course in roughly standard formation," says headhunter Bob Warseck, 53, a founder of the 18-year-old Connecticut Extreme Croquet Society, "only with obstacles as wicket magnets. Two stumps together with a big rock in the way? That screams, 'Put a wicket here!'"

There are about 15 established extreme croquet groups across the country, including an Oregon college student variation, Ironman Croquet, plus several in Europe. They know of each other, and sometimes compete against each other as well, thanks mainly to the Internet. But they generally sprang up independently, out of some combination of boredom and beer. The Swedish Kroquetklubben, founded in 1975, is considered the oldest organized club. But lore -- and fancy real estate agents -- trace the birth of extreme croquet to the Tara by the Sea estate of Herbert Swope, publisher of the New York World. Evidently the nine-wicket course Swope set up in the 1920s, which attracted players such as Groucho Marx and Dorothy Parker, spanned unmanicured parts of the lawn as well as sand and water traps (i.e., Long Island Sound), and was so large that players had to yell to each other. (I can only imagine Mrs. Parker glumly composing verses between turns. "As croquet on the standard course longer fits/ Our sport is all extemporanea/ It's more fun to battle with mallets than wits/ And I am Marie of Romania.")

Aficionados of extreme croquet are actually quite driven about their sport, in that charming-slash-alarming way in which grown-ups get really, really serious about silliness. All groups have elaborate, often evil rule systems. Seattle's Lakewood Croquet Club allows for distracting an opponent by hitting him or her on the head with a pine cone. In San Francisco, if a dog or child runs off with your ball, you have to play it wherever the interloper drops it. ("The training of dogs/small children for this purpose is legal but frowned upon.") Also, the Kroquetklubben rules are particularly harsh-looking in Swedish.

Many also use special equipment. The Connecticut players, for example, commission custom souped-up mallets with wedge-shaped heads made of durable space-age nylon polymer, and build wickets out of three-quarter-inch steel rods and heavy-duty gas-line elbows. "We drive them in with sledgehammers," says Warseck of the wickets. "There's no room for weenies out there." Still. We are talking croquet, and we are, in this case, talking Connecticut. How extreme is anything out here, except maybe law school?

That is what I, a recovered weenie myself, am here to find out. When I arrive at Edgehill Park, in the East Rock section of New Haven (the professor side of the tracks), over the high stone wall I hear shouts, insults and the klok of mallet on ball. The first player I see is a 39-year-old systems programmer named Harry. He's stranded alone at one of the two painted posts, while most of the other six players cluster at the other, about 50 yards away. Harry knows I'm looking for Bob. "Bob's over behind that tree," he says. Sure enough, there's a rustle, then a pop, and a red ball flies out in a spray of oak leaves, followed by a tall guy in jeans with longish gray faded-rock-star hair. He's carrying a mallet, and a cigar.

So that's Bob. Most of his cohorts -- one with a goatee and ponytail, another with a trucker's cap that I'm not sure he realizes is now both "in" and "out" -- are at least in their 40s. Then there's Jen, a 22-year-old graphic designer who discovered the group through its Web site, and Bob's wicket-thin son Nick, 21, who just graduated from college with a music degree.

Declining an offer to get high, but taking a rain check on the beer, I watch them finish the game in progress. I am impressed. There are crazy bank shots off tree trunks, airborne wedge shots (using the slanted end of the mallet head) out of gullies. I notice that a player named Bruce's mallet head is bound in shiny silver, the handle painted in swirling runic patterns. Looks like something he'd need (along with at least 17 strength) to get safely through the Lost Caverns of Tsojcanth.

"What does that do for you?" I ask, ruminating over the physics of the metal coating and the hollows of the holes he's punched into it. "It gives me a rush," he says. They take a break and fortify themselves with bananas and Potato Stix. Then comes my chance to play. I grab an extra mallet and open a can of Heineken. Bruce offers to sit this one out and act as my coach, my caddy, my sherpa, holding my beer when necessary and explaining, should need arise, tricky concepts such as "balking" and "deadness."

I love games, I am -- though a late bloomer -- pretty coordinated, and on the ice, I have a wrist shot with plenty of mustard. I have nothing to fear. I am stoked. I am ready to get my croquet on.

I suck. The mallet feels weird, the ball disobeys. As I line up my second shot, I notice a stick in the way and -- forgetting where I am --I move it. "Nooo!" come the shouts from my opponents, already far away. "What are you doing!?"

Right. Extreme. Right. I put the stick back where it was and continue to suck. I'm like the girl who bowls with both hands and gutters it every time. I get stuck in a ditch, hack up clods of earth. But I am too proud to cheat (much). Eventually, mercifully  when Bobs ball, having achieved poison status, thwacks into mine  I achieve deadness.

I wouldn't say I go home sore, but I do go home humbled. Yeah, these guys are a bunch of slacker hacks. And I am Marie of Romania.