In "God's Secretaries," author Adam Nicolson tells how James I manipulated 48 translators to create the supreme achievement in the English language: The Bible. 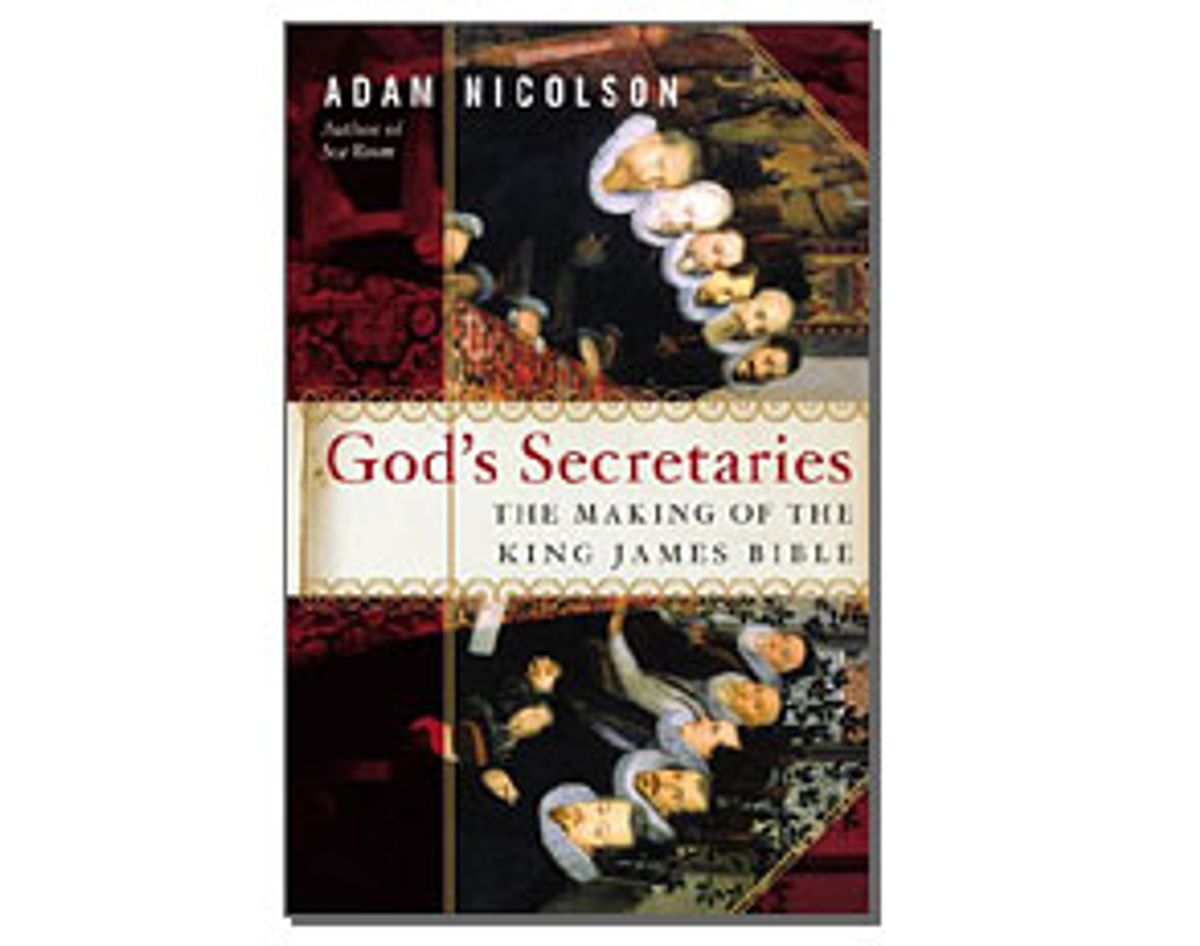 Never in history has a book been printed in such quantity as the King James Bible, nor has the English language ever produced a volume more influential. That it should also be our finest work of literature, however, despite translation by committee amidst the political instability of early 17th century England, seems, today, almost miraculous. Only if the complicated process of translation and its historical context are taken together, and appreciated for their very incompatibility, do the circumstances explain how the King James translation came to be the standard version of the Bible, and the embodiment of English eloquence.

Adam Nicolson describes the feat with impressive skill and frequent insight, if at greater length than necessary, in "God's Secretaries." "The age's lifeblood was the bridging of contradictory qualities," he claims. Judging from Nicolson's characterization of the 54 translators, their prickly king, and their precarious era, that may be the understatement of the century.

Even in his initial decision to translate the Bible, King James I resembled wily Machiavelli as much as wise Solomon. Several translations were in circulation already, most notably the extensively annotated Geneva Bible preferred by English Puritans, and the rigidly formal Bishops' Bible, distributed by Queen Elizabeth to every parish in the country, testament to the break from the Roman Catholic church made by her father Henry VIII, when he divorced Catherine of Aragon. In the distinction between the two versions can be discerned the tension James faced on inheriting the English throne in 1603: A struggle between the plainspoken Presbyterians who believed that worship of God, his good word, needed no priestly intermediary (and less still one who went around in a fancy surplice and fine silk tippet) and the punctiliously Episcopalian church hierarchy. Born Catholic and raised by Presbyterians -- following the decapitation of his mother, the notorious Mary, Queen of Scots -- James was familiar with both positions and, after 35 years as the king of embattled Scotland, anxious to bring about a reconciliation.

With that in mind, James called for a conference to consider the future of the Anglican Church. After establishing authority over his bishops by verbally abusing them as they knelt before him, he turned his attention to those of more Puritan persuasion. The danger they posed was greater, or at least more immediate, than that of his bishops, who were a threat to his authority only to the extent that they were crypto-Catholics: James had no intention to cede his divine right to the pope in Rome. The Puritans, on the other hand, challenged the very hierarchy of which he was the head. If everyone had a personal relationship with God, the King had no special claim to divinity. If God's law was apparent to all, what need had people for a monarchy? "No bishops, no king," James reasoned, with typical clarity.

The Geneva Bible, printed with maps, charts and marginalia for purposes of personal worship, epitomized the self-reliant attitude of the Puritans, and so was loathed by James to a degree at last equal to their own scorn for the pompous Bishops' Bible. As a result, when John Reynolds, one of the Puritan petitioners, attempted to supplant the Bishops' Bible with the Geneva by proposing that there be "only one translation of ye byble to be authenticall and read in ye church," James responded by "professing that he could never, yet, see a Bible well translated in English; but the worst of all, his Maiestie thought the Geneua to be."

If, on the surface, James' reply seemed a cheap trick, a threat to put the Geneva Bible out of print, it also served as an opportunity to begin anew: The King's thorny upbringing, which had embittered him to the excesses of both Catholicism and Presbyterianism, prepared him to see that the evils of the Geneva Bible didn't necessarily make the Bishops' Bible acceptable, that he need not be satisfied with either. By alienating both sides, taking away what was most sacred, James could, paradoxically, bring them together. As Nicolson explains, a new translation "had the potential to become, in the beautiful phrase of the time, an 'irenicon', a thing of peace, a means by which the divisions of the church, and of the country as a whole, could be encompassed in one unifying fabric founded on the divine authority of the king."

That, then, was the ideological backdrop against which were drafted the instructions that would guide the translators in the creation of the King James Bible. There were to be six companies of eight members, each headed by a director, the books of the Old and New Testaments divided between them. While none of the translators were either Presbyterian separatists or avowed papists, the scholarship required to make this Bible superior to any other inevitably brought with it a remarkable degree of religious diversity. The puritanical John Reynolds, for example, served alongside the future Archbishop of Canterbury. Given that each company was required ultimately to review the work of the others, consensus was bound to be contentious. Every word was to be hard-won.

Moreover, the king's instructions explicitly called for careful consideration of the translations already in circulation, not only the Bishops' and the Geneva, but also the Coverdale, the Matthew's, the Whitchurch, and the earliest of all, a 1525 work of William Tyndale, for which -- given the Vatican's aversion to making the Bible intelligible to anyone but the Latin-tongued clergy -- he'd been duly garroted and burned at the stake. Each of these Bibles, guided by a distinct belief system, differed markedly from the others. Sometimes the divide was clearly political, such as the use of the word "tyrant" in the Geneva where the Bishops', for obvious reasons, favored "king." Other differences ran deeper, such as the preference for straightforward simplicity in the Tyndale: Following the lead of Martin Luther, the translator was trying above all to make the Bible accessible, "less interested in the grandeur of its music," Nicolson explains, "than the light it brings."

The King James translators took liberally from all these sources, comparing them to the earlier Hebrew, Greek and Latin. In this way, the new Bible benefited from all that came before it, maintaining a sense of historical continuity, a calming traditionalism even as corrections and modifications were made. The language of the King James Bible was archaic even in the early 16th century, and in fact sounds of no period in literary history. The words, like the stories they tell, are truly timeless. Already ancient, they seem, paradoxically, never to age.

As Nicolson points out, such language had the potential simultaneously to satisfy the Puritans and the church hierarchy: "It both makes an exact and almost literal translation of the original and infuses that translation with a sense of ceremony and beauty," he writes. Rather than a modern-day split-the-middle sort of compromise, it was a solution reached, improbably, headlong in the pursuit of apparent contradiction.

That tension, in fact, explains more generally the profound force of each chapter and verse. Consider the second line of Genesis as translated by Tyndale: "The erth was voyde and emptye, and darcknesse was vpon the depe, & the spirite of God moued upon the water." Compare that to the King James translation: "And the earth was without forme, and voyd, and darkenesse was vpon the face of the deepe: and the Spirit of God mooued vpon the face of the waters." Three things become apparent: First, the latter is stylistically more majestic, written and punctuated in the grand manner of oratory. Second, it's technically more accurate, including the word "face" which is to be found, in the sense of "surface," in the original Hebrew. Third, it is imbued with meaning beneath that surface, again in the choice of the word "face," an anthropomorphic reflection of God foreshadowing His creation of Adam in His image.

That third quality, the multiplicity of meanings loaded into each individual word, is the most crucial. "This is the heart of the new Bible as an irenicon," Nicolson writes, "an organism that absorbed and integrated difference, that included ambiguity and by doing so established peace."

It is also the key to appreciating how the King James Bible, in its profound beauty, could be the product of a committee in such a deeply split country. The political and religious circumstances made the translators act not as a democratic delegation seeking a single resolution explicitly acceptable to all, but rather in a manner akin to an old-fashioned royal court, operating on duplicity, deceit and doublespeak.

Those qualities most reprehensible in statecraft are essential to great literature. The writer's mind is mired in contradiction, which takes to the page as ambiguity. In the case of the King James Bible, that mind comprised, collectively, many men. Yet, in their irreconcilable differences, that essential irresolution, they operated as one.