In her propagandistic novel "Amanda Bright@home," right-wing pundit Danielle Crittenden extols the virtues of early marriage, the free market and having a "mighty tree" as a husband. 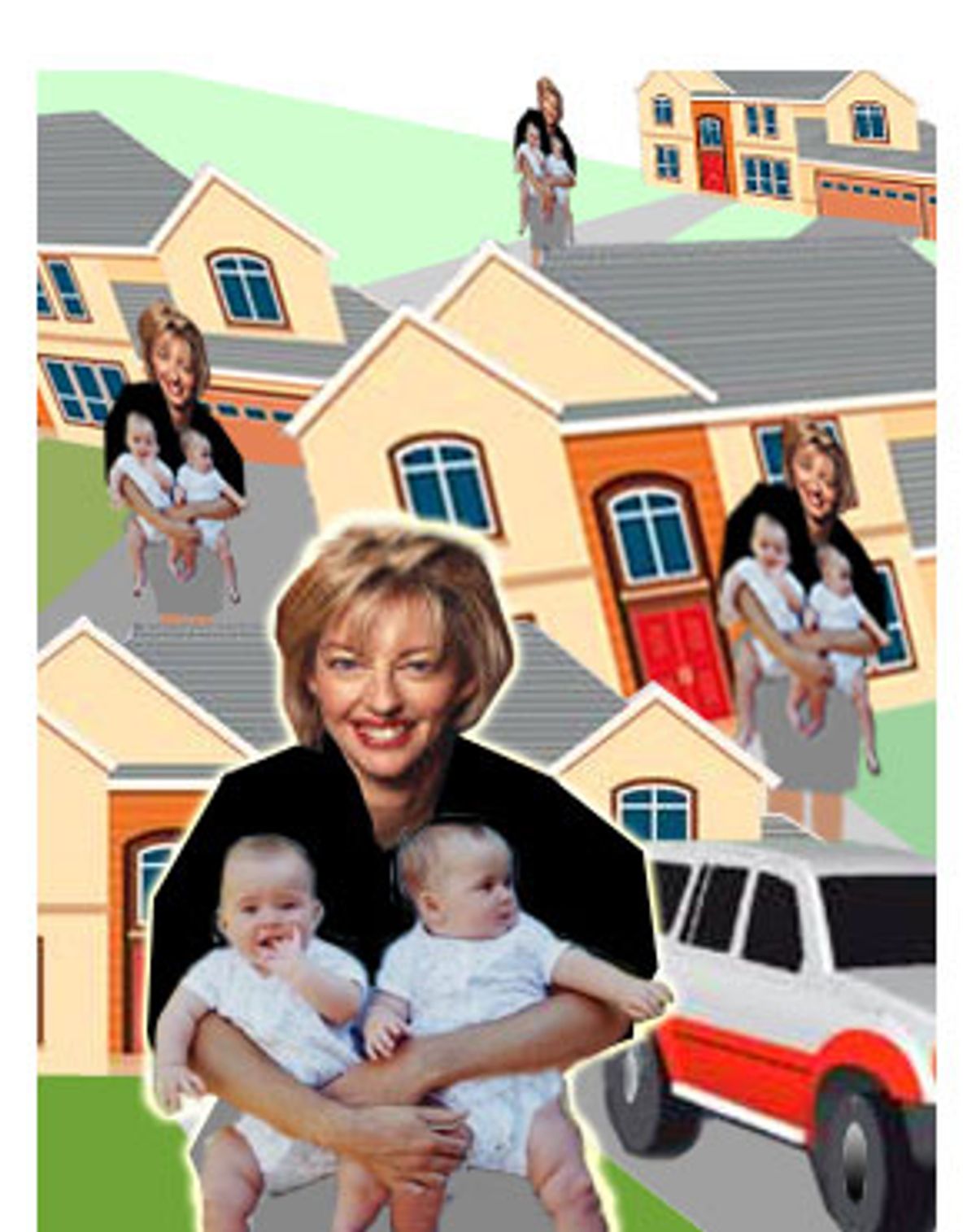 In an interview with the National Review about her just published first novel, "Amanda Bright@home," right-wing social critic Danielle Crittenden explained that she felt driven to create her own fiction after reviewing several unnamed "feminist novels." "I have had few more depressing literary experiences," she complained. The plots were "formulaic," always culminating with a "totally virtuous" woman getting up the guts to leave "the piggish husband."

It's hard to imagine, however, that these feminist tomes could be any more depressing than Crittenden's own lugubrious pamphlet, inhabited by characters crafted of the finest ideological hardwood veneers, and singing the praises of early marriage, mothering, the free market and other GOP-approved virtues.

Crittenden's novel tells the story of how her heroine, Amanda Bright, successfully achieves female happiness by following the blueprint drawn up by none other than Crittenden herself, in her 2001 nonfiction manifesto, "What Our Mothers Didn't Tell Us." The plan goes as follows: Marry young (mid- to late 20s), become stay-at-home mom, reenter the workforce when children enter school (if so desired). As we'll see, this breakthrough solution to the career vs. family dilemma works best if the woman in question has a fairy godmother looking over her career and a husband who comes equipped with large bags of gold.

The novel's plot revolves around Amanda's doubts after she makes the "radical" decision to quit her Beltway P.R. job to take care of her two children. In the climactic moment, Crittenden proves that even the family-values crowd can soar to Mrs. Dalloway-like rhetorical heights: "[Amanda] clings to [her husband's] hand as she clings to the present moment; that's all there is now, the present moment, but it, too, contains everything. It is here, it is this person, it is this life they have created, it is this life struggling within her, it is this love." Before reaching Amanda's blowsy epiphany, readers meet an endless procession of stereotypes who are impossible to care about. Apart from Amanda and her manly husband, Bob (who Crittenden describes as "a mighty tree"), every caricature -- excuse me, character -- in the book is either coldhearted, a buffoon or both.

There are the teachers at a hoity-toity D.C. kindergarten who bust Amanda's son for waving a peanut butter cookie "like a loaded gun" under another kid's nose. (Liberals won't let boys be boys, and they're childhood-allergy hysterics, too!) Amanda's beautiful best friend, Susie, is a self-involved witch who guarantees her own doom by pursuing a great job instead of a great man. Amanda's mother, Ellie Burnside Bright, is a shrill, divorced feminist who forced her daughter -- this is not a joke -- to dress up as Billie Jean King on Halloween. This politically correct harpy, who would rather spend her visits to D.C. traipsing through galleries than playing with her grandchildren, hangs up on Amanda when she announces she's getting married at 26, but not before blurting: "Where is the little girl who marched around the bedroom chanting songs about women's power?" While Amanda never addresses the subject of her politics directly, we're clearly supposed to believe that growing up with a feminazi mom led her to become what Crittenden dubbed, outside of fictional camouflage, a "New Traditionalist."

"Amanda Bright@home" reads like a fantasy concocted by the Op-Ed page of the Wall Street Journal (which serialized the book): All of the "liberals" in the book either start off as good guys but quickly turn bad, or see the error of their do-gooder, permissive, countercultural ways. The midwife Amanda visits during her third pregnancy almost kills her and her unborn child by missing obvious signs of dangerous toxemia. Bob, in Crittenden's ripped-from-the-headlines plot, is a government lawyer who gets his big break when he's assigned to spearhead an antitrust case against Megabyte, "the largest computer software company on earth," founded by -- guess who? -- an eccentric billionaire who dresses like a lumberjack and lives in Washington state. By the end of the book, however, Bob has seen the pro-business light, and he's comparing Megabyte CEO Mike Frith to "every other entrepreneur with problems with the government." Indeed, when Frith offers him a job, he jumps, eager to provide for his family like a "mighty tree" should. Crittenden can't resist providing us with Bob's new salary -- $400,000 a year! -- which reminded me of the way she felt compelled to send a mass e-mail last year proudly announcing that her actual husband, then Bush speechwriter David Frum, had coined the term "axis of evil." (Soon after, Frum left the White House; some Beltway insiders blamed his wife's loose lips for his departure.)

Most ridiculous of all is Crittenden's portrayal of the book's stay-at-home dad, Alan. I guess I shouldn't be surprised at the level of scorn she heaped on this poor sap. In a 1999 newspaper essay, here's how Crittenden described the "new dads" she observed at an indoor playground on a weekday: "They bore their little charges with great patience, their lilting voices unnaturally high ... I found myself trying to imagine these same men wearing green metal combat helmets, their faces streaked with mud, marching under the weight of guns and ammo packs, instead of diaper bags and baby carriers. No, not possible. So then I tried to imbue them with the quiet dignity and fortitude of men of a generation ago who were shot up into space or who held down dangerous and exhausting jobs in factories and mines to support their wives and children." Nope, stay-at-home dads don't have those kinds of noble jobs, either -- they're all left-wing graphic designers or organic-food purveyors. Whatever they are, they've been emasculated by feminism and their own weenie-ness. And real red-blooded American chicks don't dig pansies.

Alan is initially the only parent at her children's school in whom Amanda can confide -- she even considers having an affair with him! -- but he ends up being a laughingstock. A playwright, Alan invites her to one of his shows, which he describes as "a challenging new perspective on wealth, homelessness, AIDS" (hardy har-har -- do conservatives actually laugh at these jokes?). But the only venue he can find for his play is an old-age home, and even its decrepit, eccentric residents walk out before the curtain falls. What a loser! Or, to be more Crittendenesque, what a wuss! A fem!

Maybe I'm overreacting because my husband stayed home with our daughter for a year and a half, and I didn't notice him turning into a soprano. I did notice, however, that he and my daughter developed a strong, layered attachment, one I wished I'd had with my dad. Actually, my husband (before he decided to stay home) worked for the Justice Department, the same place where the "mighty tree" toiled, so how could he be all bad? And unlike antitrust attorney Bob, he didn't need any 11th-hour conversion to set him to right: My man was a criminal prosecutor for seven years, an assistant U.S. attorney who put the bad guys behind bars -- you don't get more macho than that.

But the real surprise about "Amanda Bright@home" is that, other than Amanda, not one parent who cares for children full-time is the least bit content or likable. Sure, you'd expect Crittenden to diss working parents. (Although the couple across the street merit only one short paragraph, readers learn that they left home "early in the morning and returned late at night," "wore government security passes but not wedding rings," and that she makes a "brief fuss over the children" when she sees them, while he regards them as "weeds that needed pulling." Fortunately, once the federal government is reduced to its proper limited role, such people will disappear.) But like Alan, all the stay-at-home moms in Amanda's mother's group are inexplicably contemptible. Two of them are utter bores; the other two not-so-secretly miss their high-powered careers and channel their competitive energy into perfecting their children, their bodies (a full face-lift for a 40-year-old is a minor plot line) or their already perfect homes.

By default, Amanda is the example all of us frazzled working mothers should follow. She's not a particularly authentic or inspiring one, however. Awaiting the birth of her third child, with her two older ones in school, Amanda volunteers part-time at a library, and eventually, after all her kids are in school, plans to pursue a teaching degree. I've got nothing against teaching, but the job doesn't come with the kinds of demands that test Crittenden's thesis, which is that a woman can knock off working in her 20s and return to a high-powered profession in her early to mid-30s.

I'd argue that the main reason Crittenden herself, a Toronto native, is a (partial) poster girl for her new feminine ideal -- she got married at 25 and had her first two children by 30 -- is that she's had a pretty exceptional life. When she was a girl, her divorced mother married a man who became the founding editor of the Toronto Sun, a conservative tabloid, and young Danielle spent much of her teens writing book reviews and features. She skipped college, and by 20, she told Mirabella magazine, she was a "swashbuckling foreign correspondent" traveling the world. In other words, when she married Frum, the heir to a multimillion-dollar fortune, she'd already had the career success most of us conventional college gals couldn't dream of realizing until after our 30th birthdays. Like Sylvia Ann Hewlett, the more recent champion of early childbearing, who despite already having four children with the same man endured five years of grueling infertility treatments to have a fifth at 51, Crittenden's unusual run doesn't inspire confidence in her theory.

Then again, maybe Crittenden isn't really trying to reach women who are as passionate about their careers as they are their children. Amanda reveals early on that, secretly, she hated her P.R. job. And even though Crittenden has spilled a lot of ink suggesting that women can reverse the order of family- and career-building without cheating either, maybe "AmandaBright@home" is actually targeted to women who prefer child rearing to jobs that are more grinding than fulfilling (certainly not uncommon), as well as to old traditionalists, readers who believe a woman should know her place, and that place is at home. The novel's unflattering portrayal of stay-at-home moms raises some doubts about this theory, but Amanda's Woolf-lite childbirth epiphany supports it. Right-wing political rants are a hot new niche in publishing: Could it be that Crittenden is hoping that the hardcore conservatives who put lunatic Ann Coulter on the bestseller list for months are just dying to read a "good" novel, one in which the men are men and the women share Amanda's special talents? By the end of the book, she's learned to clean house (her nasty feminist mother never taught her, of course) and to greet her hubby with a Scotch at the end of a hard day at the office. What mighty tree could ask for more?

Laurie Abraham is an editor at large at Elle and a freelance writer.