Reed Hundt says Monday's historic vote was "the culmination of the attack by the right on the media." 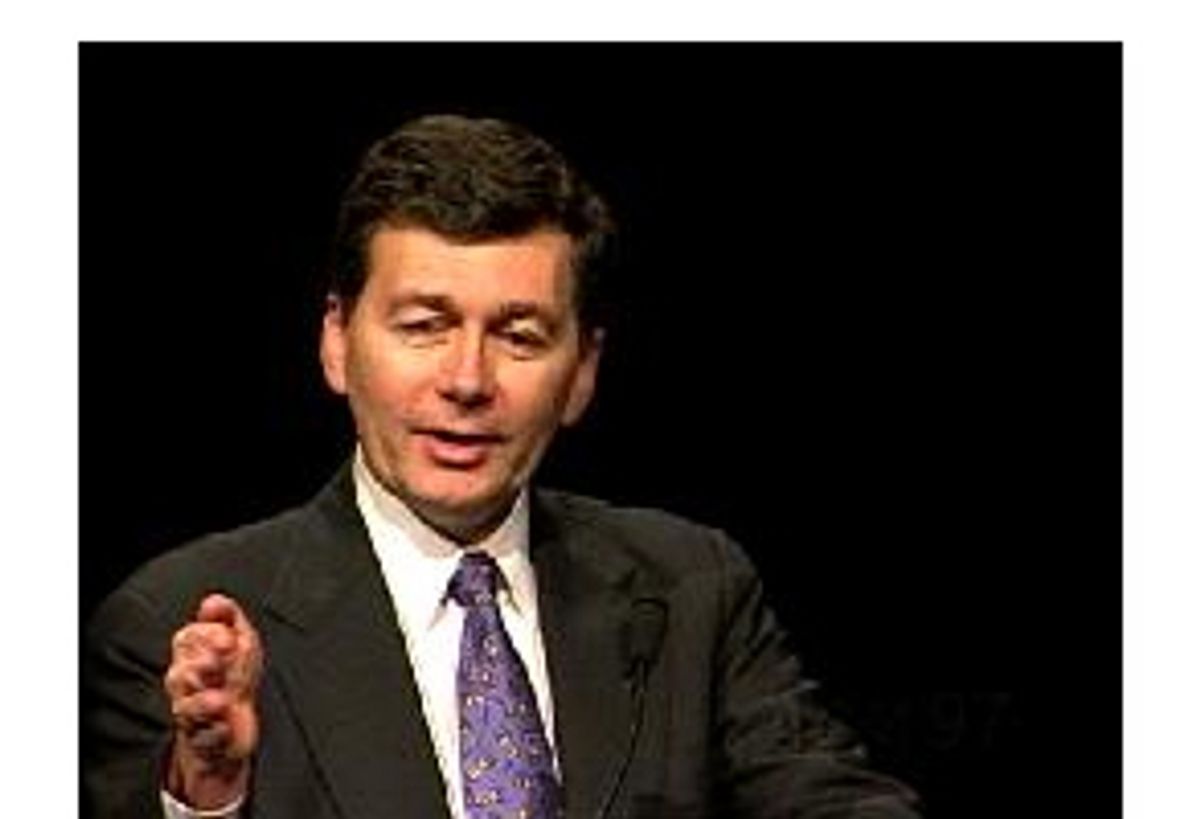 In a historic session on the future of the U.S. news media, Republicans on the Federal Communications Commission voted Monday to ease long-standing rules so that more and more of the nation's newspapers and broadcast stations can be concentrated in fewer and fewer hands.

For all the philosophical conflict over diversity in the media and the efficiency of the free market, Hunt told Salon, the vote is really about an alliance of interests between the political right and the corporate media. "Conservatives," he said, "hope ... that the major media will be their friends."

In today's political and media environment, there's plenty of evidence that those hopes will come true. ABC News recently appointed conservative commentator John Stossel to co-host its prime-time magazine "20/20." "These are conservative times ..." an ABC source told TV Guide. "The network wants somebody to match the times."

The FCC's two Democrats strongly opposed the deregulation measure that's been pushed by current FCC chairman Michael Powell, a close ally of the Bush White House, and public response to the proposal has been heavily opposed. But Hundt's blunt critique is all the more striking because he is an establishment lawyer thoroughly versed in the diplomatic niceties of high government office. He attended prep school with Al Gore and law school with Bill Clinton and served as FCC chairman under Clinton from 1993 to 1997. He is now a senior advisor at McKinsey and Co., the international consulting firm.

The FCC has long had rules regulating media ownership, based on the assumption that the number of broadcast frequencies is limited. The regulations were designed to ensure that radio and television stations remained diverse, independent voices and could withstand predatory conglomerates. But on Monday the FCC dumped those rules.

A company like the News Corp., owned by conservative world-media mogul Rupert Murdoch, will be able to hold newspapers, television stations and radio stations in the same market. Conglomerates such as the News Corp. (Fox TV, Fox News, Fox Sports, 20th Century Fox Studio, the New York Post, HarperCollins Publishers) and Viacom (CBS, MTV, Paramount Studios and the Infinity radio network) would be allowed to snatch up more and more local TV affiliate stations nationwide. And, critics say, small and medium-size broadcast companies and newspaper publishers will likely be swallowed up by bigger competitors.

In the telephone interview Wednesday, Hundt warned that the massive media deregulation will exacerbate the dangerously close relationship that's emerged between sprawling U.S. media companies and the government. "If Dwight Eisenhower were alive today," he said, "he'd be warning us about the dangers of the military-industry-media complex."

During Hundt's term as FCC chairman, the landmark Telecommunications Act of 1996 was passed. As originally drafted by Republicans in Congress, the legislation would have virtually stripped away all media-ownership limits. In the end, Clinton signed into law a compromise version that allowed only the radio industry to be deregulated.

At the time, Hundt was among the few to warn of the consequences. The new laws would allow "a few companies to buy all the radio licenses in the country," he said then. "I don't believe that's good for this industry or for this country."

His words proved prophetic. Since the law's passage, Clear Channel Communications, which in 1995 owned approximately 40 radio stations, has expanded to approximately 1,200 outlets, nearly 1,000 more than its closest competitor. Together with Viacom-owned Infinity Broadcasting, it dominates an industry once made up of hundreds of competitors. Few people -- other than employees of Clear Channel and Viacom -- would suggest that radio as a source of news, information or entertainment has improved in any way because of consolidation. In fact, most would say it's become noticeably worse.

And that, Hundt told Salon, plays directly into conservatives' agenda.

What do you think is behind the push for deregulation?

I think that fundamentally what we have here is a political debate. And let's just say that the [Bush] administration does not think that the big winners in the media consolidation game will be either the New York Times or the Washington Post.

Who will be the big winners?

Well, the conservative movement owns the FCC, the courts, Congress, the White House.

So you think that politics is more than a small part of what's going on?

Politics is always the greater part of all antitrust, and the debate now is, How do you apply antitrust to the media, which traditionally has been the job of the FCC? So it's not surprising that politics is the greatest single shaping influence on the outcome here.

Michael Powell and the proponents of deregulation say, "Look, if we don't do this, if we don't change the ownership rules, the courts will" -- and that federal courts have already struck down a number of the current ownership limits.

You seem to see much larger forces at work here.

I'm seeing democracy at work. People are getting what they voted for or what they let other people vote for.

But back to Powell's argument -- how as chairman would you handle this differently?

Any competent appellate lawyer could build a case for media diversity and win it in any fair court in the country. Period.

So you don't think the FCC has doggedly pursued a legal challenge?

If you were chairman would you have taken them to the Supreme Court?

Big matters should go to the big court.

Back to 1995 when the Telecom Act was pending: A lot of the ownership limits about to be implemented were part of that proposed legislation, correct?

When Newt Gingrich was running the House of Representatives, effective in the fall of 1994, he called all the media owners together in a room down on Capitol Hill, and according to what people who were there told me, he told them he'd give them relaxed rules allowing media concentration in exchange for favorable coverage. Now I wasn't there, but that's what they said they understood he meant.

But in the end, those provisions for cross-ownership for newspaper and television, they didn't survive the Telecom Act, right?

In the end, President Clinton allowed only the radio industry to be consolidated. Not because he wanted it, but because he used up his political capital fighting consolidation in the other media groups.

And why was he opposed to cross-ownership for newspaper and television?

Because he believed all different points of view should have a voice in the mass media. That's not a very radical idea. In times past, Republicans believed in that also.

Did he have any practical experience in his past that led him to that?

He used to tell people there were only two major media outlets in Arkansas and if they were both owned by the same guy who hated him, then neither he nor any other progressive would ever get their message across.

But this is a different world today. Progressives would be better off going to a Ouija board to channel the spirits of Upton Sinclair and Ida Tarbell, rather than trying to shake the conservative majority at the FCC. There's no way the three votes there are going to be altered in any way by any kind of popular protest. You can walk the streets of the United States and you will never find a single person who's in favor of more consolidated media, unless by chance you happened to bump into one of Rupert Murdoch's children.

So the vote on Monday will be a culmination of what Newt Gingrich set in motion nearly 10 years ago after the Republican Revolution?

It's the culmination of the attack by the right on the media since the independent media challenged and helped topple Richard Nixon.

But in a sense aren't conservatives suspicious of the media? Why would they want media companies to become more powerful?

The concern was that that complex would not be a separate stand-alone one, and that it would soon morph into a quasi-governmental one?

This is a 600-year-old story. It's not a new story. But it's news to the United States that one side should get this close to that goal.

When did the FCC in effect get out of the regulation business?

I don't think it's out of the business, at least not until the June 2 vote. It's regulation to insist on market structures that provide multiple voices. That's good, healthy regulation. We don't need regulations that tell people what to say. But antitrust policy has always been used to promote diversity in all industries. And there's never been any industry where that's been more important than the media.