One wedding and two funerals

The third brilliant season of "Six Feet Under" comes to a messy close, resisting easy narrative "closure," as all the characters must face the weight of the decisions they've made. 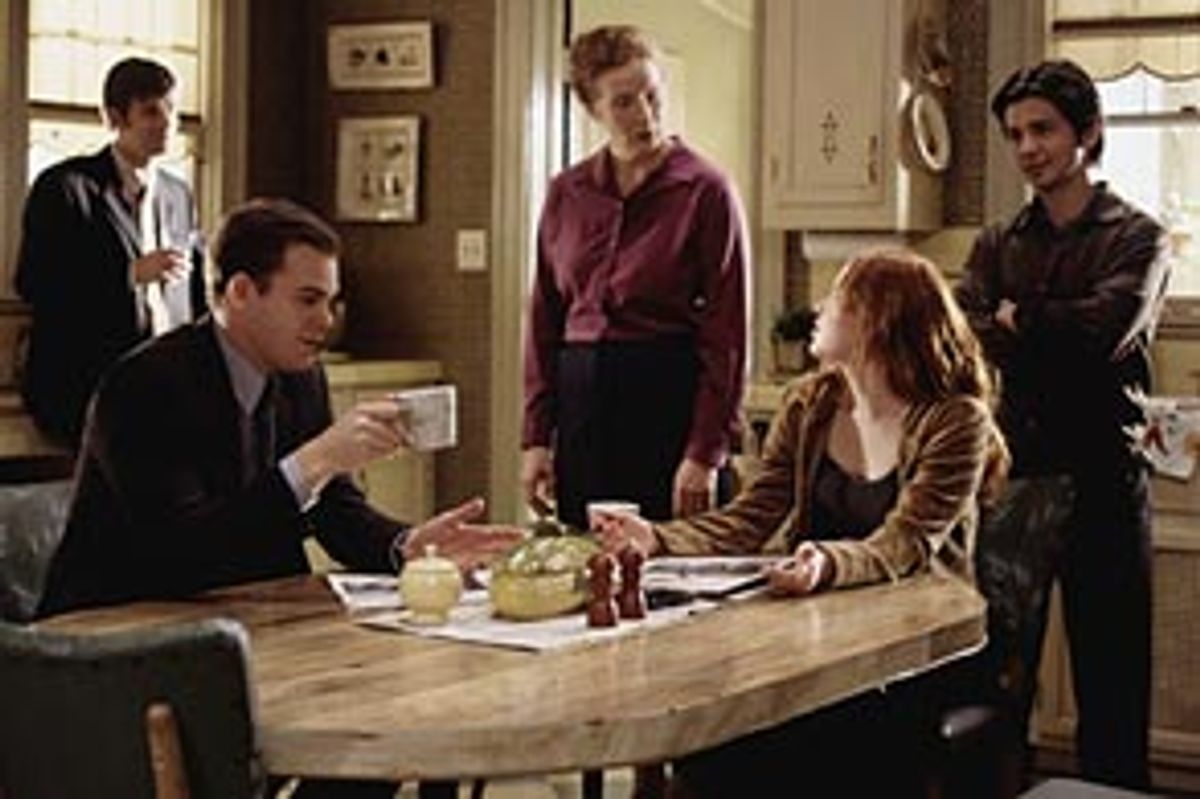 The problem with being the best show on television is that, after shocking audiences at how good you can be, everyone expects too much of you. They expect complete satisfaction and closure. Not only are the characters required to act in complicated, nuanced and unforeseen ways, but it all has to make perfect sense to everyone. While most TV manages this feat through empty plot twists followed by tidy resolutions, "Six Feet Under" would never stoop to easy answers -- which is exactly why this season's finale was bound to disappoint many of its fans.

But let's start with the most foolish criticism of all, which is that "Six Feet Under" is a soap opera. Even critics who love the show throw in the disclaimer -- "Of course it's just a soap opera" -- in order to protect themselves from criticism for enjoying a drama that dares to take on unapologetically high stakes that don't relate to the criminal justice system. But let's just review the obvious for the sake of getting our curmudgeonly grudges out of the way at the outset: Just because "Six Feet Under" doesn't hide its concern with the turmoils of everyday life behind autopsies and melodramatic courtroom scenes doesn't mean that it's a soap opera. To state the obvious, most soaps are about as nuanced as a 5-year-old's puppet show, in which each character relentlessly brays about his or her concerns: "Angela, you're up to something, and I know it!" "Don't leave me, Josh! I don't love Victor, I love you!" The quality of "Six Feet Under" hinges on its ability to reveal layer after layer of each character's inner strengths and limitations. Far from the flat, hysterical caricatures of daytime TV, Alan Ball's characters are so three-dimensional as to be almost unrecognizable from show to show.

All of which puts Ball and the show's writers in the impossible position of delivering complexity in a package that audiences expect to wrap up neatly by the end of the season. The fact that each character's behavior is formed from the same bewildering soup of emotional needs, dysfunctional tics, soulful revelations and cognitive bad habits that we face in our own lives doesn't prevent critics and viewers from reeling over the zigs and zags the show presents each step of the way. Why is Ruth in love with that creepy junior mortician? What is Claire doing with an obviously gay man? Why won't Lisa and Nate just end it, since they're so clearly wrong for each other? These are exactly the kinds of questions we ask of each other regularly, yet somehow the realism of being stuck or of grappling with decisions that transcend the usual Judeo-Christian puzzle -- "Will he do the right thing, or give in to the dark side?" -- becomes unwelcome on television.

Some of us, at least, would rather see predictable character arcs and decisions we universally agree with: Those in love stay in love, those not in love leave, those with problems spiral downward quickly but are on the road to recovery by the end of the episode. The beauty of the third season of "Six Feet Under" is that each character's arc has been defined not by inorganic plot twists or empty devices, but by a more personal, internal map of their weaknesses and challenges.

The trajectory of family matriarch Ruth Fisher (Frances Conroy) this season was perhaps the most unfathomable and, not surprisingly, she was also the character who made the most personal progress toward maturity and a more fully realized existence. Her initial encounters with the confrontational, self-serving Bettina (Kathy Bates) challenged years of rigidity and knee-jerk self-sacrifice. But her self-discovery wouldn't be complete if it only involved a confrontation of the shadow. Enter Arthur (Rainn Wilson), who presented Ruth with a mirror image of herself. Instead of being repelled by Arthur's severely controlled, impeccable existence, Ruth embraces it, thereby offering unconditional love to her own weaknesses. Ultimately, though, Arthur prefers the safety of his room to the messiness of human relations, so Ruth has to turn her back on him. Through her experiences, though, she emerges armed with the self-love to abandon herself to George (James Cromwell), a man who's not her exact opposite or her mirror image, but who's simply different and, for once, may actually be worthy of her.

Meanwhile, Claire (Lauren Ambrose) stumbles on Russell (Ben Foster), a man who's worth her time (finally!) at the beginning of the season, but both are seduced by the raw thrills of the egomaniacal artist's existence, as embodied in their art professor, Olivier (Peter Macdissi). Olivier lives by his own compass, turning his back on every social convention and moral guidepost along the way, a choice that's often breathtaking but inevitably sinks into absurdly selfish, hedonistic behavior that requires a steady flow of arrogance and grandiosity to keep it afloat. Russell proves himself too impressionable and self-pitying to resist Olivier's charms, and it's this weakness -- not his infidelity -- that leads Claire to reject him. That, and, uh, the fact that he's most likely gay.

But which is it? Is Russell gay, or is he just a self-centered jerk wheeling down the same dark, delusional corridor that made Olivier one of the most vividly pitiable characters to grace the small screen? We'll never know. All that really matters is that Claire emerges from a haze of self-interest to discover that while art may imitate life, a lot of life can speed by while you're preoccupied with such melodramatic imitations.

Nate (Peter Krause) and Lisa (Lili Taylor), on their venture into denial-fueled zombie marriage, have provided some great snapshots of a walking-dead relationship throughout the season. Once Lisa disappeared, I started to hope that the dark underbelly of her personality had emerged and that the whole story line was more than just a twist of fate. Even when Nate found out she was dead, the way he was tossing back tequila shots and recalling her saying "You want to get rid of me," I hoped that he had actually killed her, revealing a new side to the character I find the least interesting on the show. It was cheap and weak of me, I know, to hope for something flashy and fantastical and predestined when, in fact, there are occurrences in life that are impossible to categorize or imbue with deeper meaning.

Sadly, Nate seems to peek into the void every other episode, somehow assigned the unenviable role of resident nihilist. Ultimately, he's the show's Christ figure; the more he's compulsively attached to doing the right thing above all else, the more his mind-over-matter faith will be tested. Until he develops the kind of flexible, organic faith that can accommodate hatred and evil and disappointment, personified both in his dead father and in the steady stream of corpses that flow through his door, he'll continue to be crushed by one seemingly meaningless tragedy after another. Sort of makes you glad you're not quite as morally upright as he is, huh?

David (Michael C. Hall) and Keith (Mathew St. Patrick) present one of the best story lines of all, simply because the show's writers have resisted the temptation to step away from a relationship that demonstrates all of the intricacies of the struggle for long-term intimacy. In contrast to Nate and Lisa, who attempted to content themselves with a flat picture of happiness, David and Keith dig into each other's needs and desires, confronting whether or not they can make it through life together on an almost daily basis. Viewers might ask: "Things are so difficult for them. Doesn't that mean they're wrong for each other?" or "Why do they argue, when they're obviously in love and meant to be together?" Ultimately, though, they're faced with familiar challenges that become absurd mostly because looking more closely at the wrinkles does little to iron them out.

As with so many couples, David and Keith's inability to accept each other's flaws are consistently in keeping with their inability to accept their own flaws. As David's weaknesses come to light, he condemns Keith, and vice versa. Instead of confronting themselves outside the relationship, they're drawn into semantic battles, so familiar to any couple, and so ultimately futile. This futility is hinted at in one of the show's final scenes, when David accuses Keith of nitpicking. "I was not nitpicking, I was teasing!" Keith responds. "That's my style. You're picking on my style!" After a pause, the two look at each other and laugh, and their ability to do so is the real reason they're still together.

The characters of "Six Feet Under" struggle with the weight of their decisions, but like most of us, sometimes they can't see the forest for the trees. The beauty of the show lies in those glimpses of grace, the moments when each character can see clearly, step back and take in the big picture. When David and Keith laugh at themselves while Ruth and George dance in the background and Arthur, unable to witness any of it, retreats to his room to eat his cake alone, we're reminded of the risks and rewards of leaning into life without fear. Watching this show with the simplistic mind-set of a fan tuning in to "All My Children" -- Will Lisa show up alive? Will Nate and Brenda ever get back together? -- does its creators a grave disservice. There's a wisdom guiding this show that we may have never encountered on television before -- and might not encounter again -- paired with an intensity and an evanescent melancholy that can render even the simplest scenes heartbreakingly real.

"Six Feet Under" is a TV drama with the richness and depth of a good novel. The challenge it presents mirrors the challenge its characters face in confronting their own mortality: Instead of wondering how it all ends, why not let go, abandon yourself to its whims and enjoy wherever it takes you?