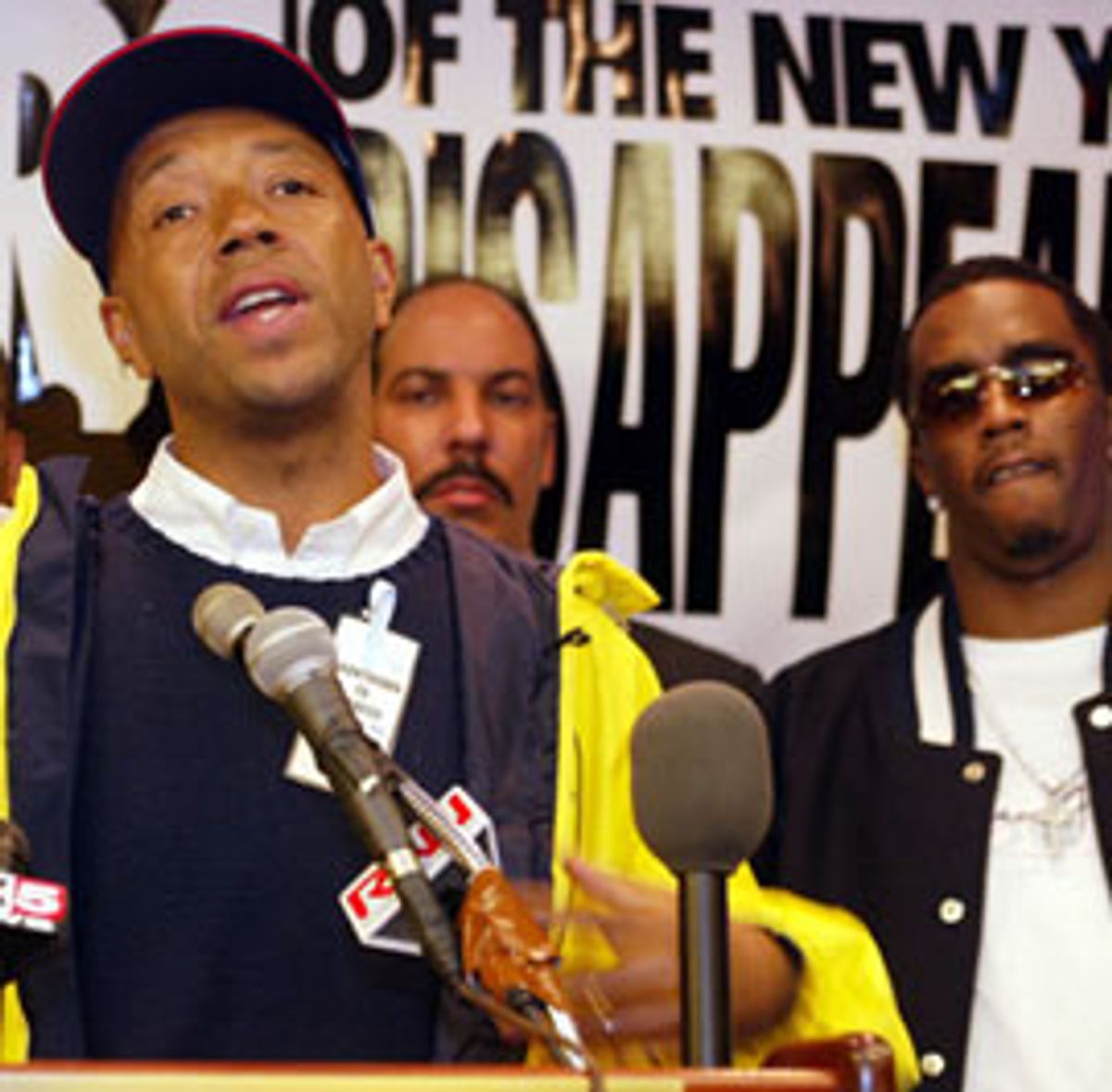 For more than eight years, New York Gov. George Pataki has said that the state's draconian Rockefeller drug laws, which mandate 15-year-to-life sentences for many low-level drug crimes, need reform. During the last gubernatorial election, all his opponents agreed with him. So did John Dunne, a former Republican state senator who sponsored the Rockefeller laws almost 30 years ago, and Sheldon Silver, the Democratic speaker of the state Assembly. According to a Zogby poll taken last year, a majority of New Yorkers also want change: Of those surveyed, 73.8 percent said they favor treatment over incarceration for drug users, who, under the Rockefeller laws, can get longer sentences than some rapists and murderers.

In Albany last summer, Pataki seemed to turn up the heat, telling relatives of inmates imprisoned under the Rockefeller laws, "The thing I most want to see happen is to see you reunited with your families." A year later, nothing has changed. Pataki "didn't have that much interest in it after the election," says Randy Credico, organizer and spokesman of Mothers of the Disappeared, a group of Rockefeller inmates' relatives. "He used a lot of smoke and mirrors to keep people interested and then preserved the laws intact."

Then last month, after years of fighting, Credico and the families he works with saw their fortunes suddenly change. Multimillionaire rap mogul Russell Simmons joined the battle, bringing with him some of his famous friends. Last week, Sean "P. Diddy" Combs spoke at an anti-Rockefeller press conference, announcing a rally on June 4 outside City Hall in Manhattan. DMX and Jay-Z recorded spots that are running on New York hip-hop stations, telling listeners about the injustice of the Rockfeller laws and urging them to attend the rally. Rap's original audience -- urban black kids -- come from the communities hardest hit by these laws, say the artists, and they should demand that politicians do something about them.

"Hip-hoppers are about poor disenfranchised people and their issues. Every day, every hour, the rappers are on the radio explaining it, talking to young people, asking teachers to teach about the Rockefeller laws," Simmons says. "As people find out more about them, they get more enraged. Madonna asked me to send her some info. Nas called me yesterday and asked what else can he do. Jay-Z cut another public-service announcement yesterday. Eminem's manager called me last night -- I hope it's because he's going to be at the rally."

The sudden support of hip-hop celebrities has revived the weary activists of Mothers of the Disappeared. "You think you're down and out with nothing left, and all of a sudden you pull off a trick," says Anthony Papa, co-founder of the group. While a May 8 Mothers of the Disappeared rally brought about 200 people into the streets, activists now hope that the upcoming event will draw tens of thousands.

But the star power also has been jarring to those who've labored for years to lay a foundation for the movement. Credico and Papa have devoted themselves to Rockefeller repeal for six years, adopting a hard negotiating posture when Pataki offered mild reforms that would have let some of the Mothers' relatives go free. Understandably, the two were furious when Simmons met with the governor without them on Monday, and made what they believed to be too many concessions.

"Someone put something in Russell's head saying repeal was impossible," says Credico. "By flashing our hand, he lowered the expectations [the governor and Assembly] thinks we have. It's like labor negotiations -- if you want $15 an hour, you don't start by saying you want $16 an hour. You say you want $25 an hour and go from there."

Simmons, meanwhile, is approaching Rockefeller the way he'd approach a business dispute. "I've got a couple weeks," he says. "I'm closing this deal. I'm not fighting anyone about no politics. I like the governor today. If he makes this deal, I love the governor tomorrow. I just want to get a deal done."

Albany's politicians are ready to deal, too. On Monday, the New York Assembly introduced a new bill that would reform the Rockefeller laws, a move that infuriated Credico, who felt the politicians were appeasing Simmons by pushing through a watered-down version of the full repeal the Mothers have demanded.

"They could have passed that bill anytime this year if they really wanted to get this thing moving," Credico says. "Now you got Simmons coming in and bringing to the table tens of thousands of other people. I think we have to move from minor reform to major reform or repeal.

"By coming out with the Assembly bill, they're saying, 'OK, we're going to start here. That's the best it's going to get,' and the governor will say, 'OK, I'll meet you halfway,'" adds Credico. "Instead of shooting for a 10, we're shooting for a 3. We're going to wind up with a 1."

A compromise, however, is more than anyone has achieved so far. "I think this rally has totally pushed the issue in another direction," acknowledges Papa, sounding more optimistic than Credico. "These are potential voters coming out here. We're talking about 100,000 to 200,000 people coming into the street to show support against these laws. A new class of advocates are being born through rap. Rap is going to change the Rockefeller drug laws."

Papa was sentenced to 15 years to life under the Rockefeller laws after a friend paid him $500 to deliver an envelope of cocaine. He served 12 years and earned three degrees in prison before Pataki granted him clemency in 1997. His Web site, 15 Years to Life, tells his story. Looking at his online guest book at the end of February, Papa noticed that one of his visitors, Ashley Cotton, came from the office of Andrew Cuomo, the former secretary of housing and urban development who ran for the Democratic gubernatorial nomination last year. Papa contacted Cotton and asked if Cuomo would speak at the May 8 rally.

Cuomo agreed to join the anti-Rockefeller campaign, and went further -- he brought Simmons in. "I had an ill-fated run for governor last year, and one of the issues I worked on was the Rockefeller drug laws," says Cuomo. "There was just no reason not to make progress. Seventy-four percent of the people support it, the politicians say they all support it. The laws were wrong 30 years ago and changing them will save money."

Yet the laws stayed on the books, Cuomo says, citing a lack of "political will" to propose reforms. "When you're talking about reforming drug laws, maybe you sound soft on crime, and this is a constituency without tremendous political power anyway," he says. "Ninety-four percent of the people locked up under the Rockefeller drug laws are black and brown. If you had economic or social power, you probably wouldn't be incarcerated under these laws anyway."

The only way to inject energy into the anti-Rockefeller campaign, Cuomo says, is to mobilize the young people hit hardest by the laws, reaching them "where they live and how they live." Hip-hop stars, he says, "have credibility that the 'political establishment' doesn't have."

So Cuomo called Simmons, who, with his nonprofit advocacy group, the Hip-hop Summit Action Network, has spent the past two years trying to build a rap-based social movement. "Education of the masses is critical when the wool is being pulled over people's eyes," says Simmons. "People have been made to be apathetic and they've been locked out. When the rappers wake the people up, politicians will realize that whatever [the rappers'] priority is the people's priority."