The man who saw God's plan

In his fascinating biography of the strange, secretive Isaac Newton, author James Gleick attempts to understand the father of physics' genius -- and comes up with a mystery. 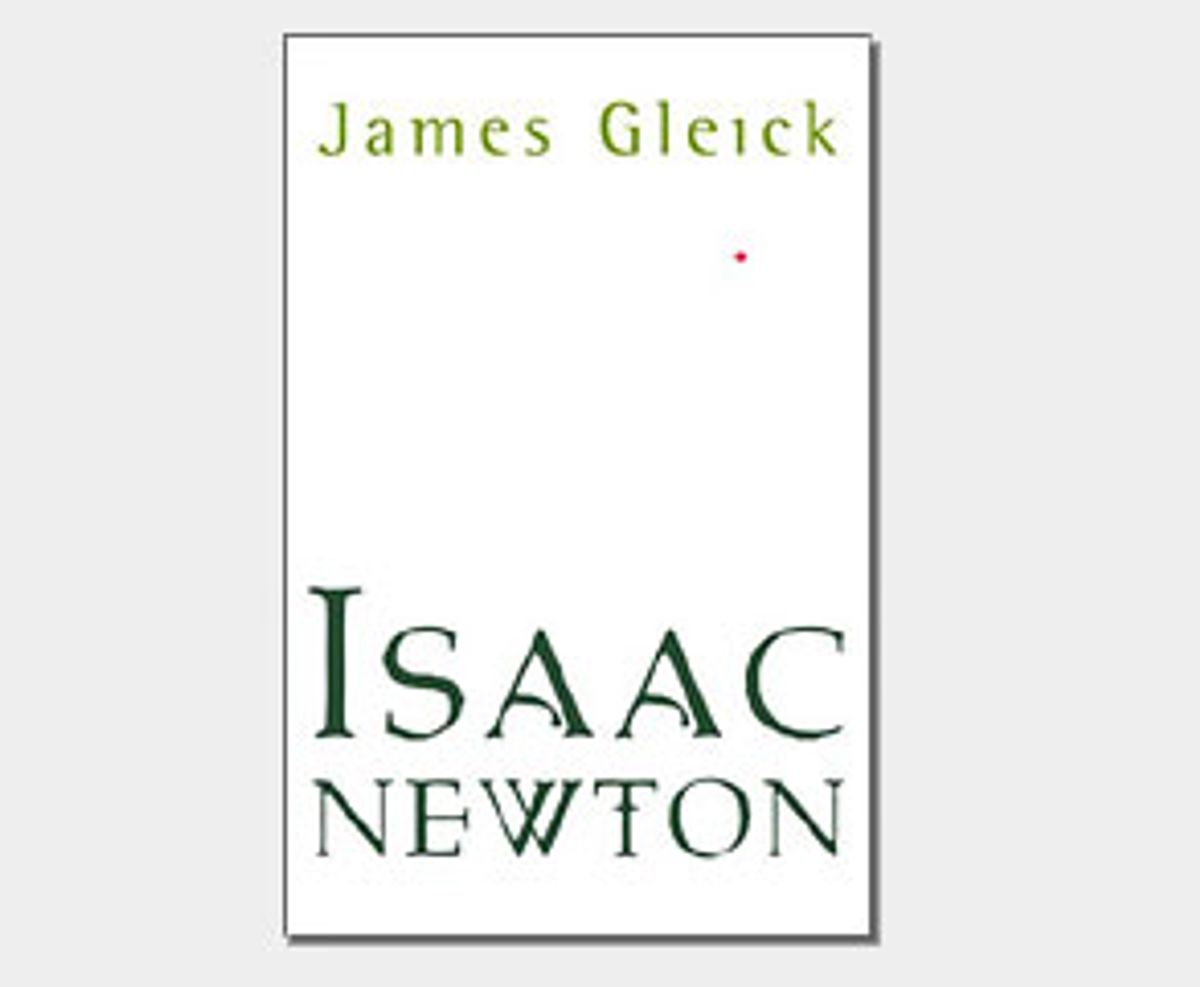 In the introduction to his new biography of Isaac Newton, James Gleick writes that Newton discovered "more of the essential core of human knowledge than anyone before or after," a fact which gets one wondering why all that most of us ever learn about the man is the story about the falling apple. You've probably heard the tale; Newton, sitting in his garden one day, sees an apple fall from a tree, and the sight -- for some reason -- inspires him to create a new science of motion. He discovers gravity, draws up three laws of physics, and, in a move whose service to humanity is still questioned by English majors, invents calculus.

The apple story has become a useful shorthand for Newton's work, but, as Gleick points out, it has a few flaws. One, the whole thing probably didn't happen. "Newton did not need an apple to remind him that objects fell to earth," Gleick writes -- Galileo had already shown that. But the bigger problem with the tale is that it condenses Newton's lifelong study of motion into a single Eureka moment, an instant in which he, for reasons that are essentially unexplainable, just Thinks Different. In school, I remember, one science teacher's entire lesson on physics consisted of an animated video that pictured Newton as a well-meaning Mr. Magoo-type, a guy who went around in a fog and, as objects presented themselves, intuited the physics behind them. The scene on inertia has him squashed by a runaway boulder. In the apple story the poor animated Newton isn't even given the dignity of having the apple inspire him into scientific discovery; instead, the apple beans him on the head, and it's in the concussion that follows that he determines the mysteries of the universe.

Of course, much in the history of science has been chopped up and boiled down for public consumption, and accuracy is often a casualty. (According to a forthcoming book, Ben Franklin might never have flown his famous kite.) But in Newton's case the history seems murkier than usual -- and after reading Gleick's "Isaac Newton" it's plain why.

Isaac Newton was a strange man, as secretive and selfish and socially inept as he was brilliant, and Gleick's account of his discoveries complicates, instead of clarifies, his greatness. The years Newton lived, 1642 to 1727, were a time of revolution in the world of science, a shift from an era of untested conjecture to one in which empirical evidence and peer review would become necessary for the validation of new theories. Newton's work completed that revolution, but the man seemed caught in it. He was perhaps the first modern scientist, rigorous and analytical, yet he was also a closet alchemist, one who saw spirits in physical matter, who believed chemicals might breathe, that they could die. He was fiercely pious, and intent on bringing to religion the same precision he was bringing to science -- for example, by questioning the mathematical logic of the Holy Trinity. His obsessions, his secrets, his suspicions, his "incessant lonely contemplation" -- they all make for a frustratingly opaque genius. Gleick tries valiantly to work through Newton's leaps, but it remains quite unclear what compelled Newton's curiosity and sparked his peculiar insights. By the end of Gleick's book, the simple story of Newton and that falling apple -- a story of unaccountable, inexplicable genius -- seems as good a way as any to describe this odd man.

At just under two hundred pages, Gleick's book is a slender, thoroughly researched account of Newton's life, written in a spare, sometimes lyrical prose-style that contrasts sharply with Gleick's other work (he was written, among other books, "Chaos," a fascinating history of chaos theory, and "Genius," a biography of the physicist Richard Feynman). Because Newton did not have much of a personal life -- "In the course of such a long life he had neither passion nor weakness; he never went near any woman," Voltaire said of Newton -- Gleick concerns himself mainly with Newton's work, which was then called not science but philosophy.

Newton began philosophy early, and he worked constantly, never quitting. In his youth, he pursued a serious, backyard study of nature, of colors made by crushed berries, of light, of sundials, of the fundamental nature of motion and time. By his mid-20s, he'd burrowed deep into the ancients' study of mathematics and then surpassed it. In secret, he compiled perhaps more mathematical knowledge than anyone who had ever lived, inventing new notions of what math did at its extremes -- at the infinite and the infinitesimal. He wondered, too, about the transition between perception and reality: Was light created within your eyes, or outside them? "With this paradox in mind," Gleick writes, "Newton, experimental philosopher, slid a bodkin into his eye socket between eyeball and bone," and in the white circles he saw he sought to find the mysteries of light.

Newton's greatest discoveries concerned the movement of objects. His three laws on motion and the mathematics that described them set the foundation for all the physics that followed. Today these may seem elementary, perhaps even intuitive: A body at rest will remain at rest. A body in motion carries a force, a measurable quantity. For every action there is an equal and opposite reaction. But before Newton the movement of things, from comets to cannonballs, was mystical; after him, if everything was not known, it was at least knowable. Newton set down the rules for scientific determinism, for the idea that the universe observed certain rules, and that once man discovered the rules, he might describe, predict and control nature. It was a radical idea, but it created the modern world.

Gleick has a particular interest in the nexus between the earthly and the ethereal, that place where physics -- cannonballs falling and planets rotating and tides undulating -- seems to point to more mystical forces behind a curtain somewhere, running the show. Non-scientists often assume that science is an eternal opponent of religion. But in "Chaos" and "Genius" and now in this book, Gleick suggests that scientists have, at the very least, an abiding interest in God, and that they more often question the received certainties of this or that religion rather than the existence of the divine. By the standards of the Anglican church, Newton was a heretic (he "denied the divinity of Jesus and of the Holy Ghost"), but nothing in Newton's research caused him to falter in his belief in God. In fact, Newton's science only confirmed his piety. "He believed in God as immovable," Gleick writes, "and this belief fused with his vision, still not quite defined, of absolute space. Newton's God had established the rules by which the universe operates, a handiwork that humans must strive to know."

I'm not sure if physics proves the existence of God (or of gods, or of some other divine force) -- plenty of atheists will tell you that it doesn't. But one comes away from "Isaac Newton" with a sense that if it's not godly, it's very spooky that mathematics, a creation of man, should so perfectly describe the ways of nature. Why does everything in the universe behave according to Newton's three laws? Why can everything that moves be mapped and measured and, stranger still, predicted? How do we know, when we launch a rocket to the moon Monday morning, that it'll be there, precisely, by happy hour Friday afternoon? We know it because the universe follows a few basic rules, everywhere and always. And is this not proof of some intelligence in the works?

To tell how Newton came to his findings, Gleick pores over Newton's private writing, his published works, and his correspondence. There are thrilling accounts of invention, of the times Newton neared great discovery: "As he wrote, computed, and wrote more, he felt the pins of a cosmic lock tumbling into place, one by one," Gleick writes of the birth of Newton's major work, the "Principia." "A fever possessed him, like none since the plague years. He ate mainly in his room, a few bites standing up. When he did venture outside, he would seem lost, walk erratically, turn and stop for no apparent reason, and disappear inside once again. He had never written like this: with a great purpose, and meaning his words to be read." Gleick also writes of Newton's professional squabbles, his constant jeering of other philosophers' ideas, his later self-importance and how, at times, he teetered on the "brink of madness."

But there seems much that Gleick can't access -- all of Newton's solitary musings, his ideas continually refined as he sat alone, thinking, thinking, thinking. After one finishes "Isaac Newton," there remains a certain enigma to the man, a mystery that runs especially deep when you ask not what he discovered but how he did it. This is, of course, the closest-kept secret of genius -- what constitutes it, what fraction of it is ordinary hard work and happenstance (being there to spot the apple falling from the tree) and what part is otherworldly insight (seeing a new science in the falling apple)? The question, in Gleick's book, is left mostly unanswered, though the author has his ideas.

"When he observed the world it was as if he had an extra sense organ for peering into the frame or skeleton or wheels hidden beneath the surface of things," Gleick writes. At times, one gets the sense that what set Newton apart from his contemporaries was nothing less than a supernatural, superhuman intuition. Newton famously wrote that "if I have seen further it is by standing on the shoulders of giants," but "he did not believe it," Gleick says. His discoveries were not incremental, not the logical conclusion to centuries of study; what's most fascinating about him, and what makes Gleick's biography so intriguing, is that Newton just sort of came up with things by himself, as if out of the blue. He wondered how the world worked. He pondered the problem for some time. And incredibly, he got the right answers.