Pixar's latest animation wonder -- a shimmery, velvety undersea coming-of-age story -- sure is beautiful. But why should we spend two hours looking at it? 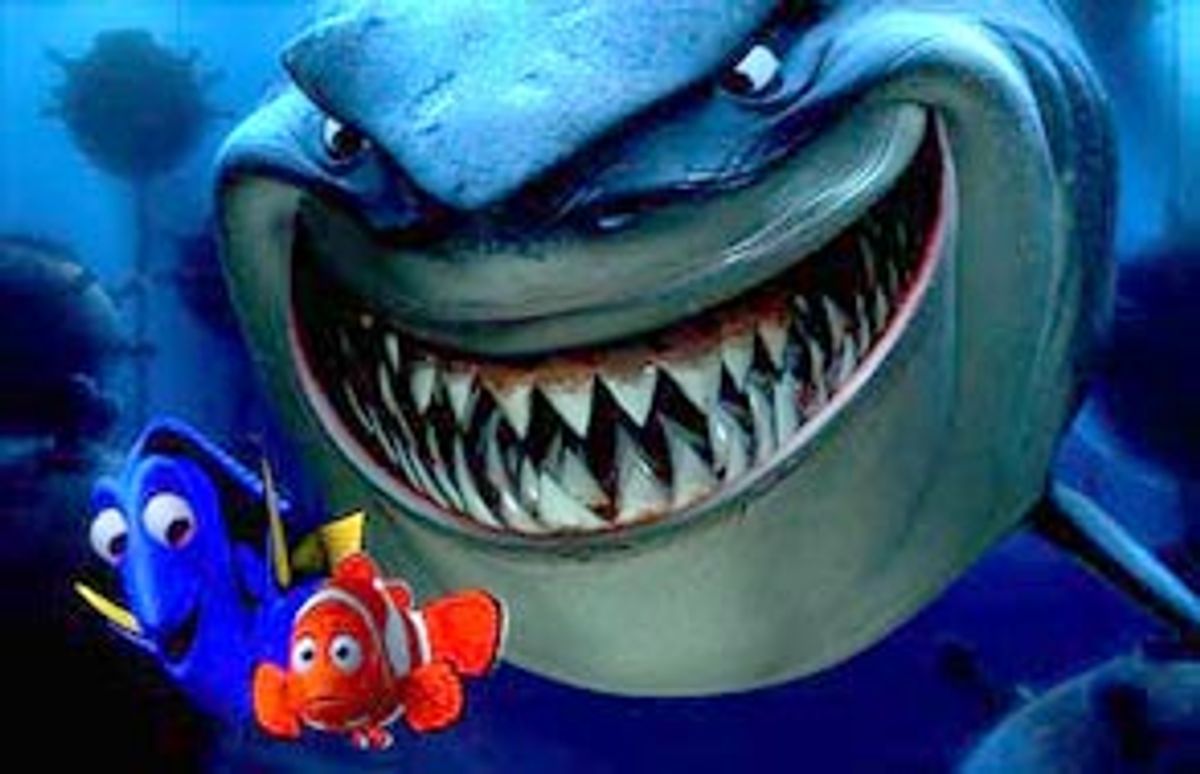 There's no question that Pixar's "Finding Nemo," aglow with translucent sea flora and shimmering, iridescent creatures, is beautiful to look at. Who wouldn't be entranced by that corps of pink art nouveau jellyfish, twirling about in their deadly underwater ballet, or by the sight of painstakingly adorable Nemo himself, the movie's hero, a brave little Halloween-colored clown fish with googly eyes and one shrimpy fin? Every moment in "Finding Nemo" is magnificently orchestrated to tease a response from us -- anything from awe to aw-shucks -- and those who don't fall for it are sure to be denounced as insensitive, blind to the magic of animation and, last but not least, pitiably unable to view the world through the eyes of a child.

But after years of cultivating the eyes of a grown-up, I like to think there's something to be said for using them. "Finding Nemo" is lovely to look at -- and time and again I found myself asking, "Who cares?" It's possible that "Finding Nemo" -- and most computer animation in general, including other Pixar micro-masterpieces like "A Bug's Life" and "Monsters Inc." -- offer too much of a good thing. How much microscopic detail can the human eye absorb before it stops registering that detail altogether? I certainly noticed that the navy-spotted back of the stingray schoolteacher in "Finding Nemo" looks so velvety it seemed you could reach out and touch it. When the movie's action took us above the surface of the ocean, I noted the multihued glimmer of that surface and dutifully scribbled in my notebook, "Lovely sun-gold on blue sea."

It's all beautiful, all right. But before long I began to feel beaten against the rocks of that beauty -- "Finding Nemo" smacks of looky-what-I-can-do virtuosity, and after the first 10 minutes or so, it's exhausting. Written and directed by Andrew Stanton, the movie is filled with bits of cleverness to keep the adults, as well as the kids, entertained. And yes, I did laugh at the way the seagulls squawk "Mine! Mine!" as well as at the lobsters' distinct Boston accents.

But "Finding Nemo" works terribly hard for every scrap of charm or humor it imparts. The story goes like this: Little Nemo (Alexander Gould provides his voice) is the only baby fish egg left after a nasty predator invades the nursery of Marlin (Albert Brooks) and his wife Coral (Elizabeth Perkins). Coral dies in the fight to protect her offspring. Marlin responds by taking such good care of Nemo that he barely lets him out of his sight -- he promises that nothing will ever happen to his son, which means, of course, that Nemo begins to yearn for some independence and autonomy. On his first day of school, he manages to get whisked away by a diver and plunked into a dentist office fish tank -- the horror! Despondent, Marlin searches the sea for him, helped along by the ditsy Dory (Ellen DeGeneres), whose gimmick is that she has short-term memory loss, à la Guy Pearce in "Memento."

"Finding Nemo" is teeming with lessons for parents and kids alike: Kids, you can do great things even if you have the human equivalent of a shrunken fin! Parents, don't shelter your kids from the world to the extent that they never get a chance to live in it! In between lessons, there's lots of peril to keep things exciting. Look out for the sharks, whales and pelicans, all of whom would dearly love to swallow Marlin and Dory (and some of whom actually do); for the above-mentioned jellyfish, who may look pretty but who sting like H-E-double-hockey-sticks; and for the deadly fish-tank filter, whose treacherous blades threaten to dice Nemo into miniature Mrs. Paul's.

Peril always equals drama in the Disney version (Disney co-produces with Pixar), and if your kids can take it, or actually like it, more power to them. I don't think there's anything particularly traumatizing in "Finding Nemo," and admittedly, if Marlin and Dory didn't face danger at every turn, there would be no story at all.

But what we get is still a snoozer. There are lots of grown-up jokes in "Finding Nemo," including a 12-step gag and a caravan of aged surfer-dude stoner sea turtles, both of which are sure to make adults laugh knowingly, which is surely the least fun kind of laughing there is, although it counts for something. And I do confess to being at least somewhat captivated by Gill (Willem Dafoe), the tough-guy king of the fish tank who takes Nemo under his fin.

"Finding Nemo" sure looks technically flawless, for those who are impressed by such things. I don't really know what's involved in making a feature that's as clearly ambitious as "Finding Nemo" is. I can't tell you how many hours were spent getting the picture to look just so (I'm sure it was a lot), and I would never question how much raw talent the individuals who worked on it possess (I doubt it can even be measured). Will lots of little kids (and big ones) enjoy "Finding Nemo"? Absolutely. Is it an achievement? Without a doubt. It's all of those things, and less -- the littlest fish in the sea masquerading as a whale, failing to take into account its conspicuous lack of warm blood.