Kerry and Dean rouse the Democratic Party's left wing at a "Take Back America" conference -- but Kucinich's Bush roasting gets the biggest cheers. 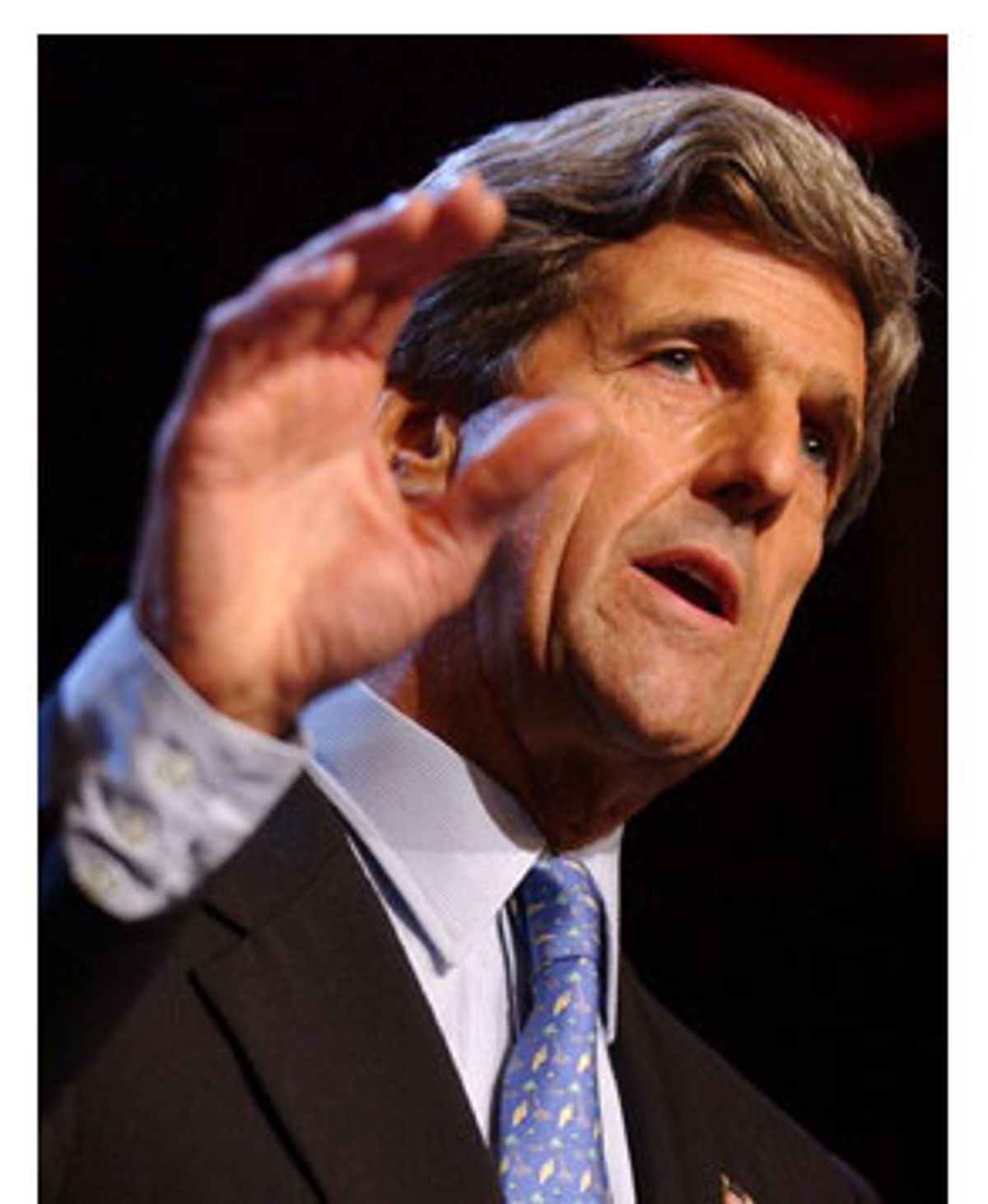 The organizers of the Take Back America conference took pity on Missouri congressman and presidential candidate Richard Gephardt on Thursday. His videotaped address to an assembly of hundreds of progressive grassroots activists would probably have drawn jeers whenever it had been played, given that the crowd was nearly as angry with milquetoast Democratic centrists as it is with President Bush -- and unlikely to be content with a video when six of nine candidates had taken the time to grace the gathering in person.

Yet had the video come as scheduled, after Rep. Dennis Kucinich, D-Ohio, had electrified the audience with an old-fashioned, red-faced, lectern-thumping populist sermon, it would have played like a parody of establishment banality. Cheers met the emcee's announcement that Gephardt was being put on hold, and the crowd streamed out of the auditorium at Washington's Omni Shoreham Hotel giddy with quixotic excitement and inspiration.

Take Back America, a three-day conference meant to rally what the late Paul Wellstone used to call the democratic wing of the Democratic Party, is suffused with a sense of emergency and hope. The event brings together people from myriad liberal groups, from the National Organization for Women to the Sierra Club to the United Steelworkers Association, all united in their commitment to elect a Democratic president in 2004. They see President Bush dismantling all they hold dear about their country, and they believe if he's reelected the harm he does will be irrevocable. But they're also animated by a growing determination to demand that their candidates speak to their values, Democratic Leadership Council be damned.

Those who showed up had diverse platforms and styles but one overwhelming message: We Are Not Republicans. "Those folks in the Democratic Leadership Council are wrong," thundered Dean, Vermont's former governor. "The way to get elected in this country is not to be like the Republicans. It's to stand up against them and fight We're going to put our flag in the middle of where America ought to be and bring people to us." It was a message echoed by the more mainstream Massachusetts senator, Kerry, who said, "One thing we don't need is a second Republican Party."

"Some of this is very much a reaction to the 2002 election, where our strategists made the tragic mistake of not taking on Bush on the tax cut and on the war," said Paul Begala, a former Clinton strategist and Crossfire co-host. "That's not what a leader does. It's what a busboy does."

Few were making that mistake on Thursday, where each of the candidates got more applause the more they slammed the president. Dean began the day with Wellstone's quip about the democratic wing and immediately went on the attack against Bush. He slammed the tax cut as a "simple attempt to de-fund government." He drew cheers when he asked, "Mr. President, where are the weapons you told us about?" and then mocked his pro-war rivals, saying, "All the Democrats said, 'Ooh, [Iraq] is a clear and present danger.' It is?"

It was a tough performance to follow, and Sen. Edwards, of North Carolina, seemed insipid in comparison. While Dean radiated fireplug intensity, Edwards was all blow-dried affability. Of course, he too garnered applause with his criticism of Bush. "This president's values are not the values of the American people," he said. "He's about rewarding wealth, not work" -- a line he repeated with slight changes four or five times. One of his biggest applause lines was, "We cannot play defense with this president. We must play offense."

Yet Edwards' criticism of Bush was the mildest of all the candidates, and his positive proposals fell far short of the radical change that progressives yearn for. He spent most of his 15-minute speech talking about his healthcare proposals, some of which seemed weirdly trivial. "We should stop misleading drug advertisements promising miracles without explaining the risks," he declaimed -- a valid point, but not one that tapped into the passion of a crowd convinced that their country has been hijacked by reactionaries.

Still, he ended on the right note, saying, "We cannot let people like John Ashcroft take away our rights and freedoms" The rest of the phrase was drowned out by applause.

Similarly, Carol Moseley Braun, a former senator from Illinois and an ambassador to New Zealand, was a snore until she hit the crowd's sweet spot. She began, speaking softly and slowly, by going on a strange, longwinded tangent about the way the Maori people of New Zealand conceive of time. The point, she finally said, is that "progress is not linear. It moves in fits and starts. The question is whether progress will be towards a vision that we embrace or a vision embraced by someone else." In the room, already a quarter empty, a young woman in a red cardigan nodded off.

Midway through her speech, though, she, like the other candidates, tapped into the boiling frustration of liberals stunned by Bush's post-9/11 right-wing audacity. This administration, she said, "is using our pain over 9/11 as a smoke screen for an extreme political agenda." Speaking about the way the war in Afghanistan dispersed al-Qaida without bringing America any closer to catching Osama bin Laden, she said, "It was the functional equivalent of someone having a crack house down the street with murderers in it, and going and blowing up the crack house and letting the murderers get away." And the crowd really went nuts when she referred to the "unelected president" who is "pandering to fear to keep us at war until the elections are over."

Kerry, seriously seeking mainstream support, had to steer clear of crack house metaphors, but he was fairly masterful at rousing the crowd while tearing into Bush without pandering to the peacenik contingent in the house. He began by mocking Bush's Top Gun stunt, saying, "Landing on an aircraft carrier doesn't make up for a failed economic policy Americans don't want photo opportunities, they want job opportunities."

He went on, "Never before in American history has there been a reversal of economic fortune as in these last two years." Speaking of low-income families left out of the president's tax cut -- a gift from heaven for campaign speechwriters -- he vowed to "crisscross this country" and hold the president accountable "for making a mockery of the words, 'leave no child behind.'"

Kerry touched on several other progressive issues. He pledged support for alternative energy and spoke to war opponents (without criticizing the war) by saying, "We will never again have our young men and women in uniform held hostage to our dependence on Middle Eastern oil." He took a mandatory swipe at the one man progressives hate more than the president by saying, "It's imperative that we have a president who will appoint an attorney general who respects the Constitution." And he promised a "bold progressive internationalism for a new age," even as he criticized "those who see U.S. power as a malignant force in the world" and argued, à la Paul Berman, that "terrorism is the new fascism, the new communism, the new totalitarianism," bringing the whole thing off with such brio that even those who do see U.S. power as a malignant force ended up applauding.

Yet the most impassioned applause of the day was reserved for Kucinich. Introduced by Leo Gerard, president of the United Steelworkers of America, as "the only vegan in Congress," Kucinich took the stage to John Lennon's "Imagine" and proceeded to conjure the heyday of American progressivism by promising a new version of Franklin Delano Roosevelt's Works Progress Administration. "We're gonna rebuild America's cities, and we're gonna do it with America's steel," he roared, his voice far larger than his elfin frame. In his spellbinding speech, Kucinich laid out a lefty's dream platform: Medicare for all, money pulled out of the Pentagon budget to pay for schools and other domestic programs, and "total nuclear disarmament." He spoke to the crowd's fury over the war in Iraq, getting a screaming standing ovation when he cried, "This war was wrong! This war was fraudulent! We must expose this administration!"

When he was finished, it was clear there was no point in having anyone else follow him. "Dennis Kucinich has barbecued George Bush," said the emcee. "How about we have a barbecue right now?" With that, the crowd adjourned to a party, many daring to imagine voting for a candidate not because he seems electable, but because they want to elect him.