Humorist Roy Blount Jr.'s slim biography of Robert E. Lee is touching and comprehensive, but he misses the boat on the Southern warrior's military genius. Most historians do. 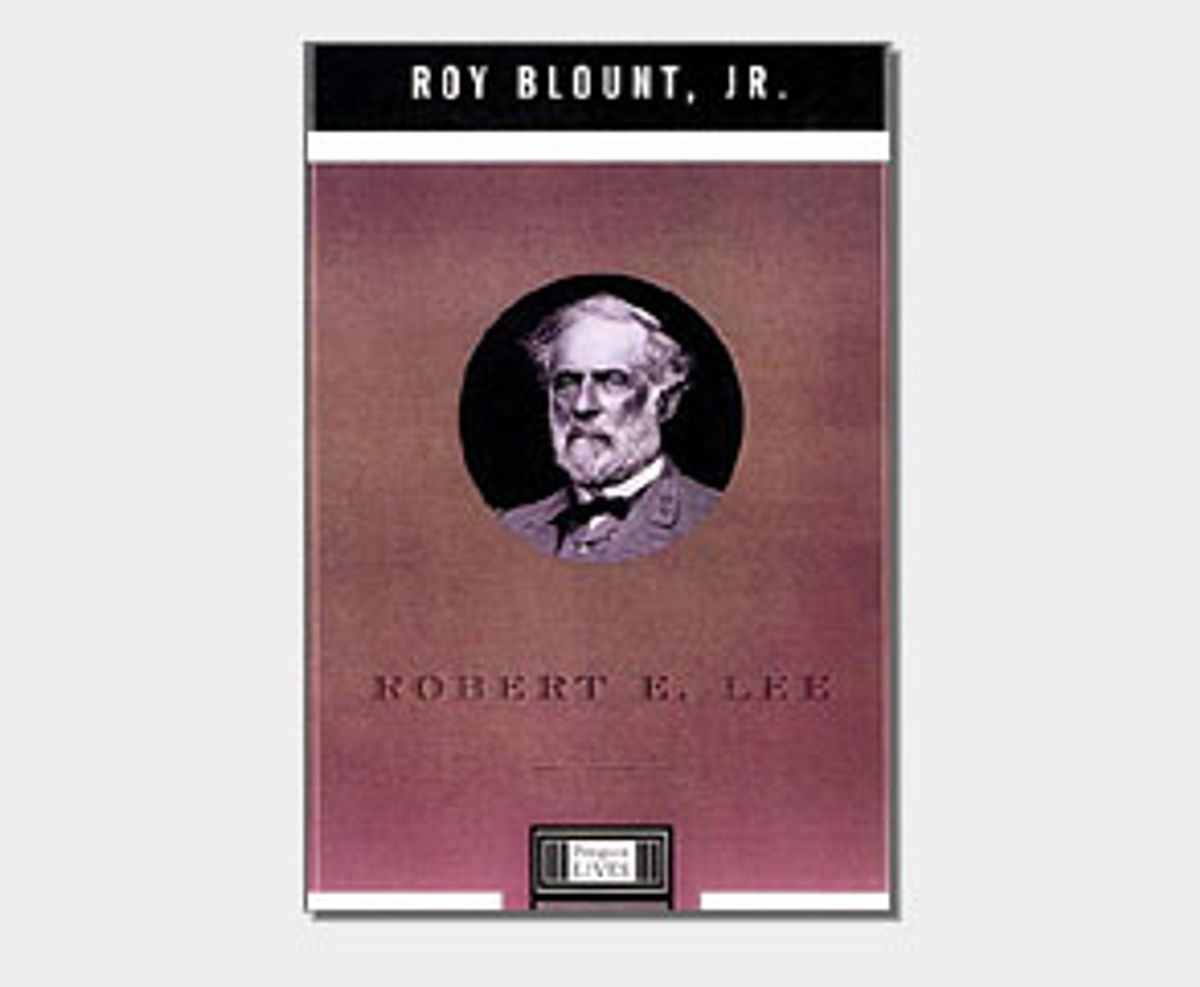 The best entries in the Penguin Lives series aren't meant to replace deep-dish biographies but to serve as an introduction to them. Simply put, they serve very well as the first book you might read about someone. The humorist Roy Blount Jr.'s "Robert E. Lee" is that and more. If you intend to read only one book about Robert E. Lee, this will do.

Blount and Lee are not a match made in heaven -- at least whichever heaven Robert E. Lee went to. Blount, a self-imposed exile from Georgia with working-class roots, isn't dazzled by the Lee legend. He is not one of the Southern boys that Faulkner's Gavin Stevens described in "Intruder in the Dust" who always looked backward to that afternoon on July 3, 1863, at Gettysburg when Gen. Pickett stood ready to signal his charge. Instead, Blount is the spiritual great-grandson of the good old boys in the ranks who asked the question "What is in this war for me?" and decided, not much.

It is precisely because he is skeptical and, of course, because he's Roy Blount Jr. and therefore so naturally damned funny, that Blount's grudging admiration for Lee is ultimately so touching. Blount looks hard for traces of humanity in Lee -- whom Thomas L. Connelly, in his shrewd 1977 study of American iconography, called "the Marble Man" -- and he finds some. Lee "relished dancing, gossip, parties," though his wife, Mary, a distant descendant of George Washington, had an aversion to all those things. (The marriage made Lee "George Washington's step-great-grandson-in-law.") He loved horses, cats and chickens and kept a hen as a pet.

Lee had more of a sense of humor than was acknowledged by hagiographic biographers such as Douglas Southall Freeman. (Freeman pronounced in 1934 that the general's "essential elements ... were two and only two, simplicity and spirituality," though it would have been wise of Freeman to consider that such a man's life does not lend itself to four massive volumes.) One of Lee's favorite jokes derived from a controversy in the Episcopal Church involving an English priest named Edward Pusey; Lee liked shaking his head "in a grave way" and telling his friends to "keep clear of this Pussy-ism." Well, maybe you had to have been at Gettysburg.

Regarding Lee's attitudes toward the war against the Union and the abolition of slavery, Blount is less generous than some historians. For more than 130 years Lee's reputation has walked an amazing middle path untrod by any other figure of the Civil War era. For sympathizers of the Old South, particularly Virginians such as Freeman, he remains the quintessential aristocratic white Southern gentleman, the ideal hero of a bygone age. For the rest of the country, he has served equally well as a noble and tragic warrior. (Nancy Scott Anderson and Dwight Anderson in their dual biography of Ulysses S. Grant and Lee, "The Generals," note that after the war New England abolitionists "created in Lee a symbol of all that they saw destroyed during Grant's administration.")

Blount is more sparing in his praise. He seems to accept the judgment of an earlier Lee biographer, Margaret Sanborn, that Lee "ignored the dictates of logic and reason and heeded the elemental call of Virginia." Elemental calls are understandable if not always forgivable. But Blount finds something more in Lee's decision to turn down command of the United States Army for the Army of Northern Virginia. Blount suggests that in fact Lee preferred the federal position on the major issues; he confided to a friend, though never in public, that "I do not believe in secession as a constitutional right, nor that there is sufficient cause for revolution." Lee "took a dim view of the Confederacy until he went to war for it," but simply didn't have the courage to defy his family and friends. In Blount's final analysis, Robert E. Lee, "in a real sense, went to war in order to avoid conflict."

On the even more key issue of slavery, Blount gives Lee a B-. In his will, the general made clear that he wished his slaves, inherited from his mother two decades earlier, "liberated so soon as it can be done to their advantage and that of others." "Given the last four words," adds Blount, "that gesture rings hollow." "There is something bloodless and cranky," he concludes, "about Lee's disapproval of slavery -- as if it were primarily a management problem."

Finally, on the subject of Robert E. Lee as military commander -- which, let's face it, is the reason we still remember Lee -- Blount gets it all wrong. But then, so do most historians nowadays. "A century and a third of analysis and counter analysis," he writes, "has resulted in no core consensus as to the genius or the folly of his generalship." Actually, there is such a core consensus: It's called the Civil War. In the first half, Lee, with vastly inferior forces, outfought and chased from the field four Union commanders, driving Lincoln into despair and northern newspapers nearly into a state of concession. In the second half of the war, the one where the Confederacy was losing on every front but Lee's, he held off the greatest Union general, Grant, for more than a year and a half, inflicting more casualties in his army than Lee had troops in his. As late as November 1864, one more solid victory by the Army of Northern Virginia could easily have resulted in Lincoln's defeat at the polls and a victory for the Confederacy.

"Why," Blount asks rhetorically, "did Lee stake everything, finally, on an ill-considered thrust straight up the middle?"

"His critics have never come up with a logical explanation."

It's a shame for Blount that Noah Andre Trudeau's "Gettysburg: A Testing of Courage" was not published soon enough to be included in his bibliography. Trudeau doesn't so much offer a new explanation for Lee's doomed assault on the third day of Gettysburg as restore the reasons that made sense on July 3, 1863, namely, that Lee saw a chance for the Confederacy to win a military victory and realized instinctively, as perhaps no other commander on either side would have, that the opportunity would probably never come again. And is it entirely beside the point that, against severe odds, he very nearly pulled it off? If the center of the Union line had broken, is it not likely that the entire Army of the Potomac under the capable but uninspiring command of Gen. George Meade might have crumbled? And that the most influential northern newspapers, none too solid behind the Lincoln administration in the first place, would have demanded an immediate cease-fire?

Every few years, it seems, Lee's military reputation is put through the wringer again, usually as a result of new interpretations of his decisions at Gettysburg. Seldom do revisionist critics recall that his greatest defeat came only halfway through the war and that after that, having exhausted the possibilities of mid-19th century offensive strategy, he practically invented modern defensive warfare.

For better or worse, much of Lee's legacy is the event that created the country we have today, the Civil War, which wouldn't have been so long or so bloody if it weren't for Lee's military genius. The ongoing debate over who was the greatest general, Lee or Grant, is ultimately fruitless. The Civil War was a large enough stage for both of them to exhibit their greatness.

If, however, Lee gave us the worst of the Civil War, he also gave us the best of it, largely because of his own decency and humanity. Civil wars in European or South American countries have generally been the worst periods in those countries' histories, scorched-earth affairs that left wounds that didn't heal for centuries. By contrast, the American Civil War was a gentlemanly affair, to the point where pickets on both sides would warn each other to keep pointless fights from making the war worse than it was. Much of this civility can be attributed to Lee's personal sense of honor. Could Lincoln's aims of "malice toward none and charity for all" have been realized had not the states of the Union seen Lee as representative of the gallantry of the South?

Who could harbor vindictive feelings toward Robert E. Lee? "General Lee," Blount quotes a belle asking him after Appomattox, "did you never feel resentment toward the North?" "I believe I may say," the general replied, "looking into my heart and speaking as in the presence of my God, that I have never known one moment of bitterness or resentment." "Ritualistic denial, no doubt," comments Blount, "but suitable to the setting, and greatly to be preferred, as we have seen in other parts of the world, to religious vengefulness."