Hillary's new book is sparking another round of that favorite national pastime -- solve the puzzle of the Clinton union. Here's one clue: Loyalty between a man and a woman is not always the same as sexual fidelity. 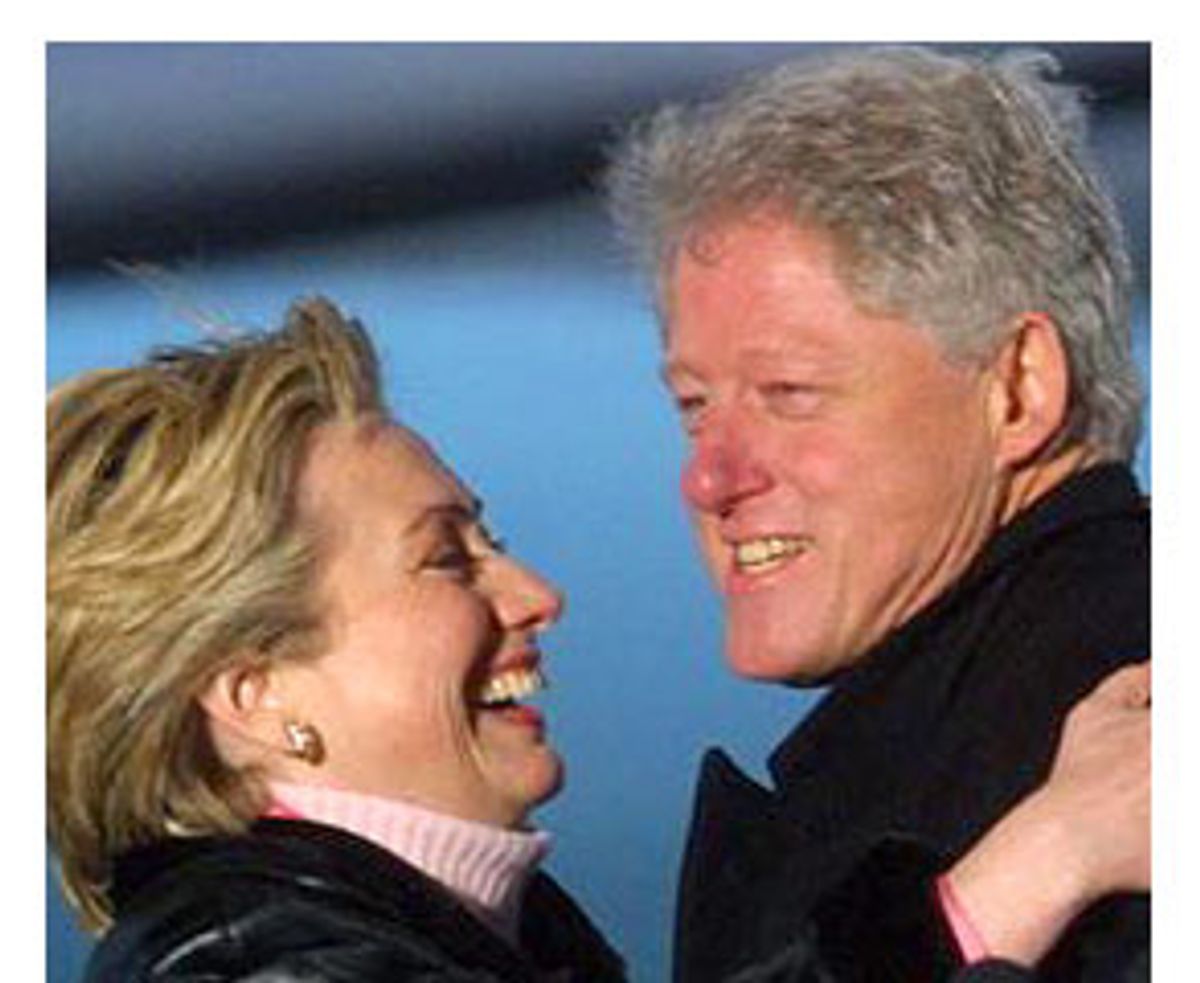 It shouldn't be such a big deal that the Associated Press recently leaked a few passages from Hillary Clinton's memoir, "Living History," which is off-limits to the press and to civilian readers alike until Tuesday. In those quoted sections, Hillary describes what it was like to learn that her husband had lied to her about his affair with Monica Lewinsky. She talks about the screaming matches she and Bill had after that revelation, and the fact that, around that time, they slept in separate bedrooms while on holiday on Martha's Vineyard.

None of those revelatory tidbits should matter, since most of us already claim to know everything there is to know about the Clinton marriage -- despite the fact that we're not the ones wearing their rings.

You can't attend a wedding, much less actually be the one getting hitched, without at some point hearing about what a challenge marriage is, how difficult it is to intertwine your life with that of another. It's the kind of thing people say without thinking, the way one might say to a friend who's just turned 50, "You don't look a day over 40!" or blurt out, while gazing at the rubberized visage of a corpse in a casket, "He looks so peaceful."

A few days ago the New York Times ran a piece on Hillary's upcoming book, taking note of how the nature of the Clintons' marriage stands to change in the wake of the publication of their respective memoirs (Bill's is due to follow next year): "The personal nature of Mrs. Clinton's book suggests they are about to define a new period in a relationship that has long been a source of gossipy speculation and that even their closest friends describe as enigmatic."

Naturally, everyone gossips about marriages, particularly celebrity marriages, and Bill and Hillary are nothing if not celebrities. But what really struck me about that line was the idea that "even their closest friends" find the Clintons' marriage mysterious -- as if, somehow, their closest friends should have a better idea of what the Clinton marriage is like than the rest of us.

Who ever knows the truth of a marriage except the two people inside it?

That seems like the most obvious statement in the world, one that most married people wouldn't hesitate to agree with once it's put to them so plainly. And yet we all feel qualified to play armchair marriage counselor to the Clintons -- and we all have our own ideas of how marriage should play out where infidelity is concerned.

While Clinton was still in office, I recall reading or hearing, time and again, suggestions that the Clintons must have some sort of "arrangement" -- that it wasn't a real marriage, like the kind normal people have, but a union forged and maintained to further their political careers. Among many other things, this seemed to be a convenient way to paint Hillary as a sort of monster, a hugely ambitious man in a woman's costume -- in short, not the kind of wife anyone would want to have at all. Sure, smart, tough women are great, as long as you don't have to actually sleep in the same bed with one. Can't we please have a first lady who's more interested in reading "Green Eggs and Ham" to underprivileged kids than in figuring out a way to make sure those same little kids have access to doctors and hospitals when they need them?

As a first lady, Hillary was never soft enough, or predictable enough, to suit anyone's taste. Even those of us who have always liked her find her intensity a little scary -- well, OK, a lot.

But we're not the ones who married her. From what we outsiders can see of it -- which, of course, is very little -- I'd argue that the Clinton union, with all its trials and difficulties, should be seen as a new kind of model for a White House marriage. That's not to imply that there's any such thing as a "model" marriage to begin with; it simply means that looking at the Clintons' union, with more objectivity and less gossipy fascination, might expand our ways of thinking about what a "good" marriage actually is.

For one thing, acknowledgement of their mutual political aspirations has always been a part of the Clinton marriage, and how is that necessarily a bad thing? There are plenty of couples who mutually support each other's careers and who view each other, as the Clintons seem to, as intellectual equals.

As far as their personal relationship goes -- the parts of it that are wholly hidden from us -- even entertaining the notion that their marriage is an "arrangement" is insulting. It seems incomprensible to most people that the Clintons actually took the part of their wedding vow that says "for better, for worse" at face value. In other words, some pretty bad stuff happened to them within their marriage and they found ways to sort it out instead of letting it shipwreck them. I sometimes think people are so nervous about the mere concept of infidelity that when they hear it's happened in someone else's marriage, they secretly hope that marriage won't survive. Because the notion of actually recognizing a partner as a fallible human being, and working it out and moving on, is much, much weirder to people than the idea of saying, "You have destroyed my trust in you forever!" and walking out. People are so much more comfortable with rigid notions of what they can and can't accept than they are with the idea of having to be flexible -- in other words, of having to allow that the person you share your bed, your home and your life with is also human.

From Gennifer Flowers to Monica Lewinsky, Hillary has certainly put up with her share of potential embarrassments. But she never acted ashamed, which was the role that many, many people -- on the left as well as the right -- wanted her to fill. Anyone could guess that the Clinton marriage has been pretty rocky at times. But as highly public marriages go, it seems like an astonishingly mature and adult one, particularly in the face of the absurdly conventional expectations most of us in this country seem to have about matrimony. All of Europe was howling with laughter during the Monica debacle, partly because they couldn't understand what Clinton's personal life had to do with his job performance and partly because in those countries people seem to understand that, in a world where people are actually lucky enough to have sex drives, infidelity happens.

In his recent book "The Clinton Wars," Sidney Blumenthal tells of a conversation he had with Romano Prodi, then Italy's prime minister, around the time of the Kenneth Starr investigation. "We talked at length about the convolutions of Italian politics. Then Prodi asked me to explain the [Lewinsky] scandal. 'Please,' he implored. I gave him a brief, factual chronicle. 'No, no,' he said. 'I don't understand.' I tried again. As I tried to offer yet another explanation, he interrupted: 'There's a man, yes?' 'Yes,' I answered. 'There's a woman, yes?' 'Yes.' 'I don't understand. There's a man. There's a woman. Please explain this scandal to me' I gave up. Trying to explain Ken Starr in Italy was not a productive exercise."

In dealing with the scandal -- that is, in choosing not to deal with it publicly at all -- Hillary may have been far too European for our tastes. My sense is that loyalties between the Clintons run so deep that an act of infidelity -- or even two or three or more -- may not be enough to shake them off their foundation. No matter how pissed off and hurt Hillary may have been about Monica, she and Bill certainly closed ranks at the time of the Starr inquisition -- talk about intimacy forged in the face of a common enemy. It seems clear that Bill is loyal to her above all others, and she to him -- which I see as an exceedingly romantic, rather than cynical, notion. There's a great line in Julie Taymor's movie "Frida," in which Diego Rivera pledges his loyalty to Frida Kahlo but can't be so dishonest as to pledge sexual fidelity; and together they discuss the notion that loyalty may be much more significant in a partnership than fidelity.

It's OK for Communist painters to think about marriage that way. But for presidents, as well as for many of us civilians, it just won't do at all. Marriages are strange and mutable things. Infidelity can and does hurt people (although deceit may be, in the long run, more damaging). Marriages sometimes fall apart because of it. But plenty of marriages survive it, too -- not because it's necessarily a good thing, but because sexual fidelity isn't the sole component of a marriage.

Do I want to read what Hillary has to say about how she felt about Bill during the Monica blowup -- about the screaming matches, and the sleeping in separate beds, and all that? Hell, yeah! All marriages are like high-seas adventures, subject both to changes in the weather -- in other words, highly unpredictable outside factors -- and to the stability of the boat you've built. And reading about someone else's adventure is often much more entertaining than actually weathering your own. Married people know all too well what their own beds are like; once in a while, you can't help wanting to know what goes on in other people's.

But I'm just as curious to see what Hillary has to say about the collapse of her national healthcare initiative. One aspect of the Clintons' very public union is that during Bill Clinton's presidency, they both seemed devoted to improving American life as much as they could. I think of them as busy, ambitious patriots united by common personal and political goals. It sure doesn't sound like such a bad marriage to me.