From a man with pig cells in his brain to an orphaned child with five parents, the new documentary "Bloodlines" explores how genetic engineering is already changing us. 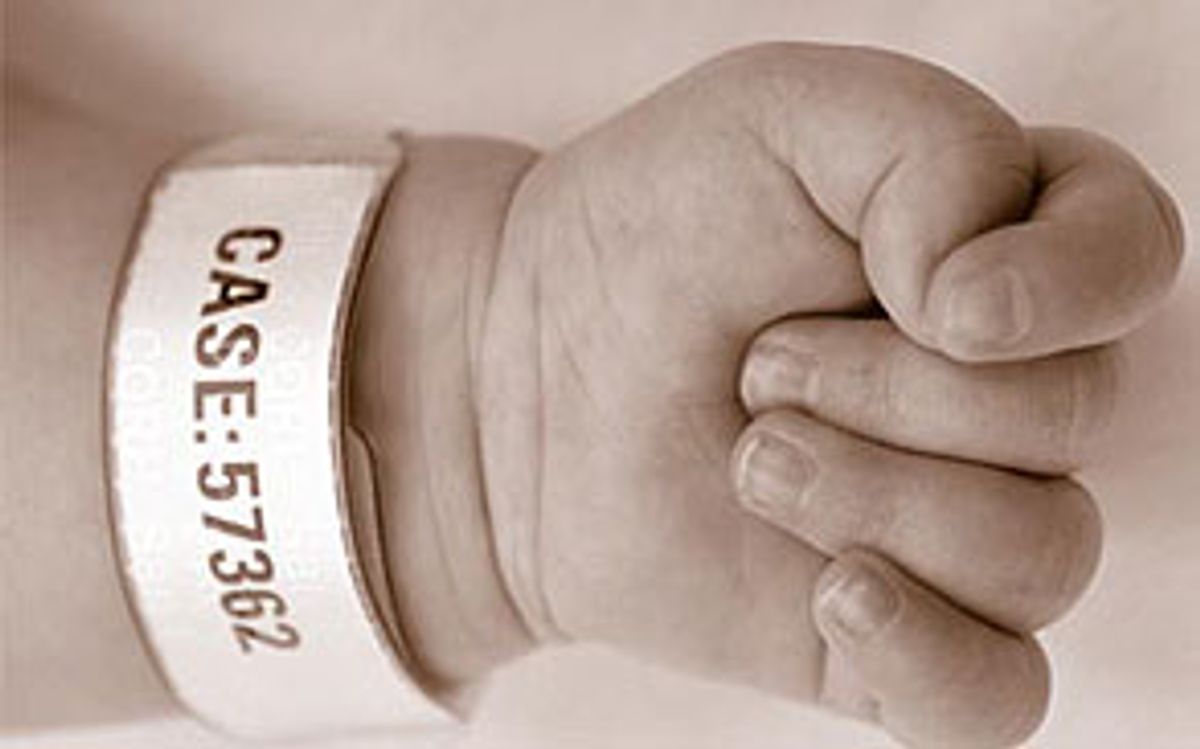 Take a sperm donor, an egg donor, a surrogate mother and an infertile couple. From these five "parents," create one baby -- a little girl who a California court rules belongs to none of them.

That's because right before the baby's birth, the infertile soon-to-be-dad files for divorce from his wife. In doing so, he declares there are no children of this unhappy union.

In the Buzzanca vs. Buzzanca case, a court agrees with him, ruling that without genetic or gestational ties to the child, the baby wasn't his, despite the $200,000 that he and his wife had spent on multiple artificial inseminations, six in vitro fertilizations and six surrogates. The ruling meant not only that he didn't owe child support but also, by extension, that the child wasn't the daughter of his ex either.

The baby had become a kind of petri-dish orphan who'd gone from five parents to none, both a medical miracle and a social nightmare.

The baby with five parents and no parents is just one of the freak-show inhabitants of "Bloodlines: Technology Hits Home," a new documentary airing nationally Tuesday night on PBS, written, directed and produced by Noel Schwerin. The others include a man with fetal pig cells implanted in his brain and a human-chimp hybrid embryo.

While the ethics of human cloning and genetic engineering are debated in policy circles such as the President's Council on Bioethics, "Bloodlines" makes a forceful case that the unintended consequences of new reproductive and genetic technologies are already playing out in doctor's offices, family courts and workplaces around the country.

"Bloodlines" is tasteful and compassionate, displaying an utter lack of P.T. Barnum-esque hucksterism. The film doesn't overtly play up the shock-value quotient of its bizarre subjects. It doesn't need to. It turns out that the unnatural concoctions genetic science has wrought are far more viscerally shocking than old-fashioned freaks of nature.

The documentary focuses instead on exploring how U.S. law is confronting these never seen before changelings. "We don't have a very good legal grounding to answer the question, What is human?" one talking-head lawyer informs the camera. That may be so, but in the case studies explored in the film, the law is unexpectedly good at assimilating both new ways of creating life and entirely new life forms.

In the Buzzanca vs. Buzzanca case, a higher court overturned the lower court's bizarre decision, ruling that the ex-husband did owe his ex-wife child support and that she was the girl's mother. The one nagging question the film doesn't answer is why the couple using an egg donor, sperm donor and a surrogate mother didn't just adopt a baby that already had been conceived. If neither parent was going to give his or her genes to the child, what drove them to create a made-to-order baby that the father then rejected?

There's also no law against hybridizing your own brain with another species, and that's a good thing as well for a man whose Parkinson's disease leaves him unable to talk or button his own shirt. Jim Finn was able to get 12 million patented pig cells implanted into the part of his brain that's dying. He describes his rationale for agreeing to the experimental treatment: "I had absolutely nothing to lose. I was going to die. So I said, 'What the hell, go for it.'" His debilitating condition improves so dramatically that he ends up feeling that "having pig cells in my brain has made me more of a human being rather than less."

Only the most ardent animal-rights zealot would want to deny Finn this treatment out of squeamishness that a few million fetal pig cells went into a human head to heal its ailing brain. But another case asks, How far should human-animal hybridization go in the name of experimental treatment?

Developmental biologist Stuart Newman's request for a patent on a human-chimp embryo hybrid is denied by the patent office on the grounds that the 13th Amendment, which outlaws slavery, prohibits the patenting of a human. But such a hybrid could, theoretically, be an excellent source of hearts for people needing transplants. Would a human-chimp hybrid be so wrong if it could help the Jim Finns of the world who suffer from heart disease? Still, what rights, if any, would such a chimera have: the right to vote? Could a human-chimp hybrid run for president if the lab it was conceived in was on U.S. soil? Has that already happened?

Newman says that he has no intention of making a half-man/half-chimp and that he applied for the patent to spark debate. "The idea that genes are some kind of common currency that offers some kind of interchangeability is not true to nature and not true to science," he decrees. He plans to appeal the patent office's decision in court.

But it's not just what science can do with our genes, but what it can foresee our genes doing to us that causes intriguing kinds of trouble. When railroaders working for Burlington Northern Santa Fe Railroads filed worker's comp claims for jackhammer-induced carpal tunnel syndrome, their genes were screened by the company without their consent to uncover whether they had a natural propensity for the condition -- a kind of genetic predisposition.

Thirty-six railroaders sued the railroad, with help from the Equal Employment Opportunity Commission, and settled for $2.2 million, although not before many of them unwittingly turned over vials of blood revealing their most personal information to their employer -- their genetic code.

By profiling actual people affected by these genetic technologies, "Bloodlines" goes beyond the arm's-length positions of both doomsayers and cheerleaders and shows how the issues at hand are already playing out in the real world today.

Perhaps the most interesting conclusion is that the cases explored in the film suggest that the American legal system is up to the challenge of chimeras and their ilk. There isn't a single truly cautionary tale here, where justice is undone by a doctor's lab. The law may not have a good definition of what's human, but these cases suggest that at least for the moment it's holding the line on what's not.