My mother taught my little brother to swallow bitter medicine, she practiced giving shots to oranges, she drove him to chemo. And she took us swimming. 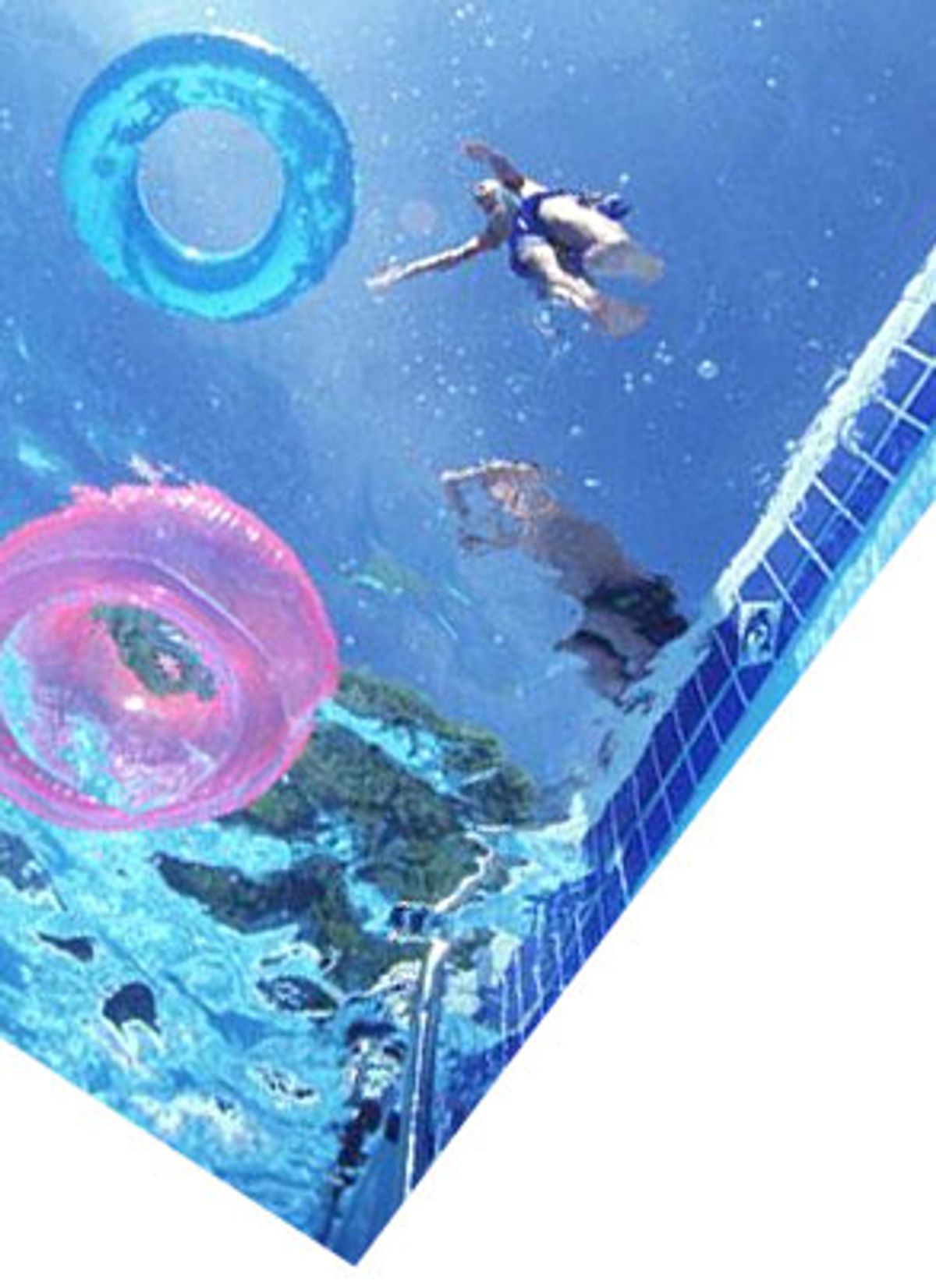 I learned to swim in the company of ballerinas, at a pool in a park filled with pine trees. The Victoria Pool was near a stage that coaxed dancers to the cool air of upstate New York to perform every summer. Though they shared lounge chairs with regular people like my own family, those who packed sunscreen and baloney sandwiches in small canvas coolers from a giveaway at the local racetrack, these women with long, sculpted bodies and hair swept up at the crown seemed from some place much harder to reach than New York City.

The pool was one of two in the sprawling state park where arcades rose from lawns of bright green grass and old-fashioned iron gates. The red brick buildings were open-aired, with arches overlooking a reflecting pool and thickets of white pine and hemlock trees. Mineral springs bubbled from rocks in hidden pockets of the park, water that once upon a time lured people in need of healing from across the country.

The Victoria lay behind the arcade, hidden inside the courtyard of a smaller building that faced a long expanse of tall pines. Out front the trees filtered the sun onto fallen pine needles in slivers of glittering light, but inside the pool opened only to the sky, and from its edges, the tops of the dark trees seemed high enough to catch passing clouds.

The other pool in the park was bigger, filled with kids like my brother and sister and me, screaming and splashing and playing endless games of Marco Polo. It lay in the midst of cement and grass, with fewer trees to shelter its swimmers from too hot days. The Victoria was smaller and quieter, and even though the day passes cost more, my mother liked it best. She had grown up in the south end of Albany, above her father's bakery and across the street from a softball factory. The smiling pictures of her summer vacations were snapped on sidewalks and stoops, not beside swimming pools.

Her own mother worked in the bakery and cooked for the family's restaurant and bar. Up every day before the sun, her face found color from long hours baking over the hot oven. Once in a while she took a bus 40 minutes north to the mineral waters at the park. I liked to imagine my grandmother floating in the marble tubs at one of the park's bathhouses, silver bubbles soothing her tired body.

Maybe my mother liked retracing her steps. Maybe she thought we needed healing. Maybe, after one particularly bitter winter, both outside our house and in, she sensed that we'd find it at the Victoria.

The first storm had come before the snow, a blast of fear beginning when my brother stopped eating. It began simply enough one night at sunset when he started pushing the food around his plate, but turned into something more complicated, causing my parents to sneak looks over our heads, following his fork, his every bite, night after night throughout the fall. In the same clutch of weeks, the kitchen table, so wrapped in mystery during those meals, would later be cleared of plates and piled with books. My mother, having worked as a secretary since she graduated from high school, had just begun courses at the local community college. She did her homework after washing the dishes from our dinner.

As the last leaves fell and the tumor was discovered the books disappeared, flung aside by a flurry of doctors and hospitals and one diagnosis. My mother's new job became making my brother well. Every other week she drove to a hospital three hours and one state away, my brother and his pillow and blankets in the back seat. Sometimes the rusty blue Horizon broke down on the highway in between, and the two piled out, always waiting too long for someone to stop and help a woman and a 9-year-old boy. Sometimes they took the bus, where my brother slept off the nausea the chemo had left him with, his head in our mother's lap.

That winter my brother's face puffed up like a cartoon chipmunk, his stomach bloated like a bowling ball under his Dallas Cowboys shirt. His hair slipped away just before Christmas, radiation pushing the roots up till wisps were all that was left. The chemo turned his insides out, sending him to the bathroom over and over in the middle of the night. At the same time, I was growing, too, pounds ticking up the scale. A twitch blossomed in my right eye, a tiny flutter that felt like nothing more than a raindrop splashing beneath my skin. It would not leave me no matter how I rubbed my eyes, like a heartbeat, come and gone in a blink but always with me.

And yet, even threaded with nights of sickness, falling hair and bodies gone haywire, our lives were mostly the same as before the cancer found him. My brother missed school every Wednesday that he traveled for his treatment, but rarely on Thursdays. On Sundays the family went to Mass, though some mornings found him lying across the pew as everyone around him stood.

That first season of his treatment, we skied each weekend in the Adirondacks and spent days after school riding red sleds down the hill in our backyard. We cheered my brother's basketball games in the church's youth league. And when summer came, we swam.

The Victoria had always seemed plucked from another world, one of grace and elegance and perfect ballerinas. And then, more than ever, beyond my reach. Puberty had raced across me that winter, leaving crooked stretch marks on my skin that didn't melt away with the snow. For the first time, the red brick and thick trees didn't offer enough shade. Instead of diving in, I spent more time under towels, nose in a book. I stared at the ballerinas and the blue sky. When I did venture to the edge, it was only covered in my father's T-shirts, refusing to slip them off until my body disappeared, swallowed by the water.

I pretended not to hear my brother, his shiny head glistening with water, shouting for me to come hunt for pennies on the bottom of the pool. I pretended not to see the differences between my little sister and me, hair scooped in the same ponytails, bodies in the same bathing suits. But she was still all skinny legs and cartwheels, someone who could believe our sick brother was taking medicine and therefore would be well.

It was on a very hot day that my mother sat, as always, along the edge of the pool, dangling her legs in the water. It was the middle of the week, and many of the lounge chairs were empty. But the dancers were there, sleek and creamy-skinned. I watched them, sure I knew the sketch of their lives: nights onstage, days by the pool. No hospitals or baby fat or bald heads. Bathed by the sun, never burned.

My eyes were on them as my mother called to me, waving, "Bessie, come swim for me."

I shook my head, pulling a towel over my chubby legs. I looked down to my book, but could not concentrate on the words. I had always loved to swim for her. When my arms pulled my body across the water in strong bursts it felt like a gift only I could give her. My mother had never learned to swim. It was something, like not going to college, she thought made her different from all the other mothers in our suburban town. I knew, even then, that these things embarrassed her, made her feel she hadn't done enough by us.

But she was different, the winter had proved as much. My mother knew that the best way to teach a 9-year-old to swallow a bitter pill was to mix the crushed pieces with sweet Pepsi in a shot glass. She practiced giving shots to fat oranges on the butcher block until her hand was steady. She scanned the radio on those long drives with my brother, looking for "American Pie" because a song like that lasted and made the road ahead come a little faster. And she knew the best way to treat a possibly dying boy was, of course, to live.

After a moment, when she had stopped calling, I raised my eyes to the pool. I could hear my sister laughing, and after a moment saw her bobbing beside my brother, swimming in small circles around him. He laughed too, flicking water toward her each time she passed. He floated on my mother's legs, his arms wrapped under her thighs, his toes poking up from the waves, held aloft by her body's strength. My mother leaned over him, splashing water over her arms and neck where half a dozen gold necklaces swam, many held together by tiny heart-shaped links of gold.

As I watched them, one skinny, one bald, one strong, all mine, it seemed there was only one thing to do. I stood and pulled the billowing shirt over my head and dropped it on the towel. Moving past the dancers, my eyes fell over the shimmering water, the rich brick walls and feathery pine trees rising above us toward blue sky. I walked to the edge beside my mother and, for a moment, shed my fears and plunged in.