Can Bush be toppled? 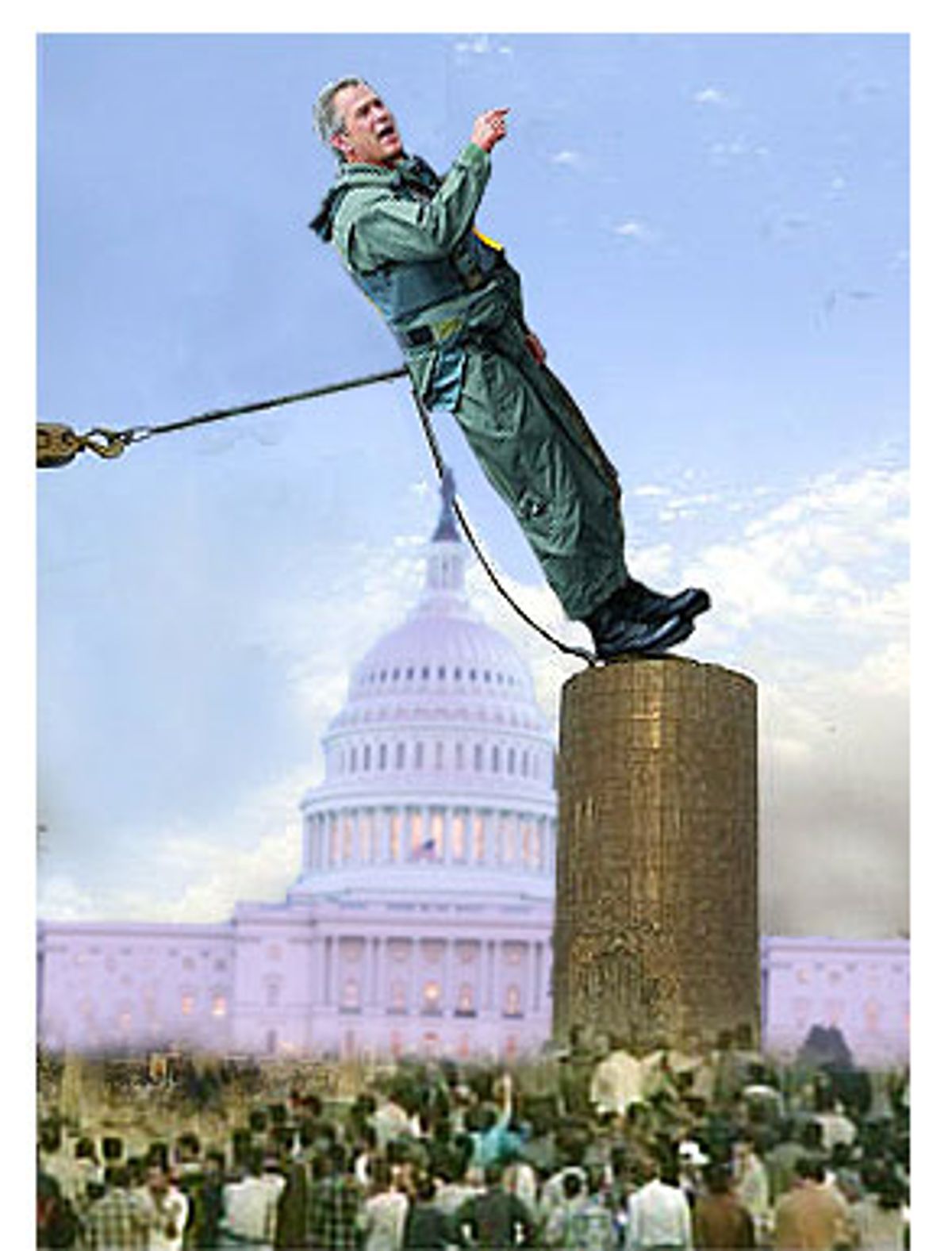 Is Bush beatable? Sure. The pollsters who are saying national security is all that matters are wrong. By the time the election rolls around, the issue of jobs, whether or not you're able to pay your mortgage and send your kids to college, whether you have health coverage -- they're gonna be paramount. But you don't have any Democrat who has nerve enough to take Bush on and take him on consistently. Every Sunday talk show should have a Democrat forcibly taking Bush to task on all the lies -- the weapons of mass destruction, tax cuts -- whatever the lies are. They have to take him on in a dramatic fashion -- the way Bill Clinton would have. I mean, in 1992 we were in a time of great pleasure surrounding the defeat of Saddam the first time, by the first President Bush. But Mr. Clinton was able to defeat him.

So I'm not endorsing yet. I'm watching to see who survives the first assault on the beach -- all this early maneuvering. Some of these people will fall by the wayside. Maybe someone new will emerge. But the advice I'd give all of them would be: Stay focused on George Bush. Focus on every perceived weakness, every opportunity. And try to get him in dialogue with you personally. Bush's responses are so programmed it's unbelievable the national media allows him to get away with it. You realize there's no time Bush has to face the people like Tony Blair does regularly? There's no prime minister's hour in this country? Now, in the past, it's been the press who's been the opposition, so to speak, questioning the president -- but Bush has been careful not to present himself to the press in that fashion. [After that last scripted press conference] news organizations should have simply stopped covering him on such a programmed basis. But instead, they got programmed into the war -- programmed into the tanks, which utterly ruined any objectivity. The press is gone. The free press in America has been compromised. But they loved being out with the generals. It became so apparent that they'd been pimped.

I think all smart Republicans believe that any of our candidates are always beatable, and so we behave as if we're going to lose. Therefore we try to pull out all the stops in terms of fundraising and in terms of demographic and psychographic outreach and targeting.

The biggest way Bush is beatable is if Republicans and Bush beat him. The remarkable thing about George W. Bush is how much of a leader of the Republican Party he's been, and that's kept a lot of the bellyaching and groaning to a minimum, whereas we Republicans in the past have been the source of much our own undoing -- whether we stray from our base, or our promises, or we try to be just a little bit different from the Democrats, thinking we can beat vanilla by being French vanilla, which doesn't work. Or in having this ridiculously unhelpful echo chamber saying, "He can't win, he can't win," as you saw in the case of Bob Dole. That becomes a self-fulfilling prophecy. So the largest stumbling block would be Bush himself and the Republican Party, because when you're on top there's only one way to go -- down.

The biggest thing Bush has going for him is that he's an incumbent, which is a very powerful, powerful tool. But the economy is always the 400-pound gorilla, the economy is always the most important issue. It doesn't mean that people are so concerned about macroeconomics, but really about kitchen table economics. I think a candidate or a political party that steps forward and actually has a plan, where people can start to do the math, Perot-style, that actually illustrates his or her idea, rather than just attacking the president, and basically says, Here's my plan and here's what you get back from it -- here's $600 you can use to pay bills, put your kids in private school, whatever it is, could do well. That person would also need to superglue Bush to America's perception of a very bad economy, because right now that connection is not being made. People trust him as the president, trust him as the domestic chief on the economy -- and also think the economy's not doing well, but don't blame him for that. It's very odd, even the White House will tell you this, but it is what it is.

And as the "WE" cluster of issues -- war and economy -- is forced to share more of the stage with the "SHE" cluster of issues -- Social Security, healthcare and education -- the Democratic Party has had a natural advantage on those issues for decades; people don't trust Republicans on those issues as much as they do on the war and economy. So that would be a natural vulnerability for any Republican.

If the Democrats can step up the heat and place doubts in the minds of Americans about Bush that are currently not there, basically portray him as "But for 9/11, he would have been an average president" -- well, that's a very bold move, and I think it's an overstatement, but it would at least wake up part of the electorate to focus on it, and would set apart whatever Democrat is so inclined and courageous to say this. And if Democrats are going to recapture the issue of national security, they need to convince voters that homeland security is not working. And they need to convince people that we're investing so many of our resources -- money, manpower, etc. -- in international security, but we are failing to protect our borders, our citizens, our monuments, our air travel, our water supply. They actually have to scare people. Look, it's a heck of a lot easier to get people to run to the ballot box out of fear, frustration and anger or nervousness than it is to get people to pull a lever and say, "Atta boy, keep going." So in that way alone, the Democrats have an advantage.

I also think there's always lurking dark-horse issues. One is if Bush has a Quayle moment and is treated unfairly for a basic human mistake -- and it sticks, that's key here -- that could potentially be costly. Another dark-horse issue could be the plight of children in this country. If the Democratic Party were to start to run ads showing hungry, homeless children, showing staggering statistics about death rates among young black youth, black youth on black youth crime, and the very poor state of public education for many American children. Just really the fact that in parts of this country it's looked upon as no better than in the Third World -- and connect it to George W. Bush and assign blame and say, Gee, this is compassion? Then perhaps.

And then another dark-horse issue is a dark-horse candidate. Obviously if Hillary Rodham Clinton were to run in 2004 it would change the dynamics. That would change the dynamic completely and make it a much more competitive mano a mano contest. You know, Al Gore could be that dark horse candidate for all we know. He could come back and say, "See, I stepped aside, and these nine buffoons are making no sense. This party is not the sum of its parts and we need one strong candidate to emerge -- and here I am, ready."

The Democrats will have two potential issues against Bush. The first is that if there is another terror attack before the 2004 election -- and there almost certainly will be -- the president will be vulnerable, if the attack relates to a target that his administration failed to address because big business lobbyists got their way. What I'm thinking of specifically are attacks using any of the thousands of daily shipments of dangerous chemicals, a vulnerability that Tom Ridge and his staff are scared of, but which the industry's lobbyists have succeeded in getting the White House not to address. This, while safeguarding the aviation industry has been federalized, the chemical industry not only is responsible for its own safety, but it continues not to be required to take any specific security measures to safeguard its facilities or the thousands of daily truck and rail shipments of their cargo that could easily be used to cause catastrophic damage, were they hijacked or sabotaged and blown up in a crowded area or tunnel. Everyone who knows anything about homeland security knows this is the greatest vulnerability, but it's an area where big-business lobbyists continue to have their way at the White House. The second issue, of course, is the economy, and the related effort, through the tax cuts, to destroy government. If the economy doesn't pick up, the president will be extremely vulnerable.

But on the question of national security, the Democrats can't simply hold press conferences that say we're not spending enough, or doing enough in every conceivable area. They need to focus. For example, we are doing well at the ports, and the issue of protecting airplanes against shoulder-fired missiles is ridiculous. Nor can they do it by complaining about North Korea, for instance, without presenting a solution. What they can do is target specific credible areas where the administration has been weak, and hammer away at those. I also think they could successfully criticize Attorney General Ashcroft, not on the usual civil liberties grounds, but on his inconsistent and turf-hogging policies that have actually hurt the fight against terrorism. For example, he should have called shoe-bomber Richard Reid and Zacarias Moussaoui "enemy combatants," so he could have questioned them. Instead, he seized jurisdiction over them and we got no information from these al-Qaida operatives -- and in Moussaoui's case, we're not going to get a trial. Similarly, by clinging to the hapless INS, rather than agreeing to allow it to be consolidated with Customs, Ashcroft preserved his turf, and also perpetuated the incompetence of our most important screen against terrorist infiltrators -- until the president finally yielded to Tom Ridge months later and allowed them to be consolidated. Ashcroft is a good target based on the competence argument, not the ideological argument.

Friday: Tom Hayden, Paul Berman and Ross Mirkarimi agree Bush is beatable -- but disagree about the role of the Greens.