Want the dimwitted fun of reality TV without wasting hours of your life watching crap? VH1's "Reality Wrap-Up" is here to save your day! 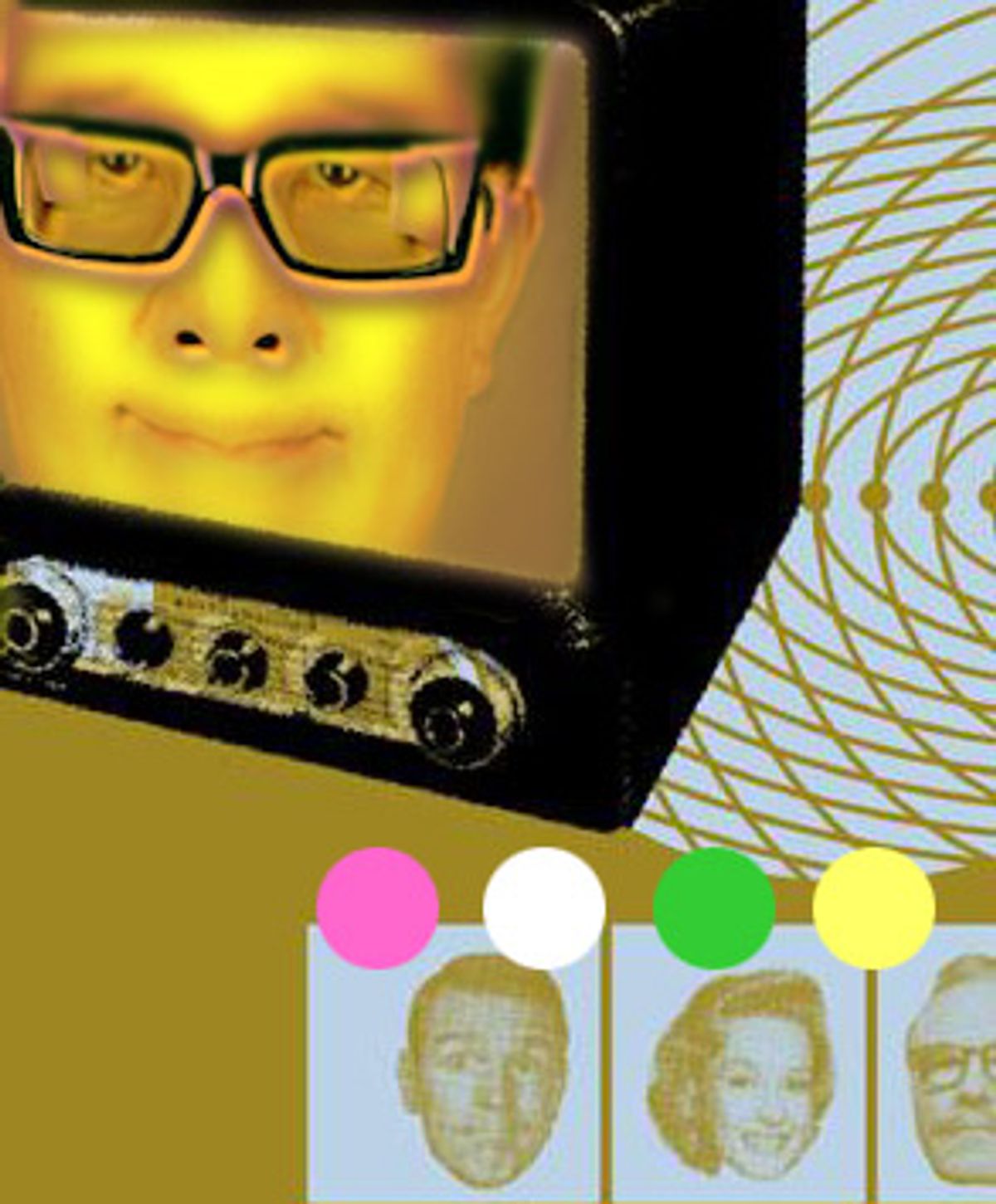 Now that reality TV shows are more numerous than stars in the sky, do you ever wonder how you'll keep up with them all? When you think about all the shows that are slipping through your grasp -- Animal Planet's "Pet Star," say, or UPN's "America's Next Top Model" -- does it make you feel overwhelmed or powerless? When you consider all the bad dates and mediocre displays of talent and hollow conversations you're missing right now, does it make you weep bitter tears?

Do you ever fear that you could fall so far out of the reality-TV loop that you might never catch up, so that instead of watching "American Juniors," "Last Comic Standing" and "Real World: Paris" on a Tuesday night, you might be forced to read a book or, worse yet, have a conversation with a real live human, one with unstyled hair and back fat? Is that how you want to spend the balance of your days on earth, pretending to care about people who don't make grandiose statements or lash out violently or tap-dance or get naked and jump in a hot tub every few minutes?

Well, dry those tears, little cowpoke. VH1's "Reality Wrap-Up" (Fridays at 10 p.m.) is here to save you from the unbearably mundane existence that some people refer to as "reality." (Isn't that ironic? I think it is, but I can't be sure, since I don't read books or speak to other humans.) "Reality Wrap-Up" is to reality TV what "Talk Soup" is to talk shows, only with more jokes and less Craig Kilborn. Host David Hussey runs through the lowlights from the week's reality shows, updating viewers on the latest finalists and eliminations and revealing the most absurd, ridiculous and downright vitriolic moments from each show. Each clip ends with a plug for the show -- required in exchange for the clips, I'm sure -- but even the plugs have an edge: "Check out more high jinks on 'Girls Behaving Badly' Sunday nights on Oxygen -- but only if you've got absolutely nothing else going on."

Obviously "Reality Wrap-Up" is a brilliant idea. And ultimately, the show is a lot more useful than "Talk Soup" because, while it was fun to keep up with the latest hair-pulling brawl on Springer, it was never remotely important. In contrast, reality TV has displaced politics, the weather and the state of Kathie Lee's marriage on the top 10 small-talk topics most likely to be bandied about by sad humans nationwide. Armed with a few dumb facts from a slew of worthless reality shows, you could navigate a cocktail party, an office birthday party, a bar mitzvah or a Tupperware party, and probably even get through all of the above without having to stab someone in the jaw with a tiny plastic sword or being forced to purchase popsicle makers you'll never use.

Beyond acquiring useful small talk, though, "Reality Wrap-Up" will keep you up-to-date on the latest ridiculous shows, from the Food Network's "Date Plate," on which two guys compete for a girl by cooking her a meal, to ABC Family's "Switched," in which two teenagers switch lives for a week. While it's still unclear to me what actually happens on shows like "Warrior Challenge" and "Girls Behaving Badly," the clips quickly make it crystal-clear that neither is remotely worth watching.

Like other creative filter shows such as "Pardon the Interruption," "Reality Wrap-Up" wades through a glut of bad TV and emerges with an upbeat, absurd half-hour of television that's bound to make you laugh out loud at least once. Making cheap jokes about reality TV isn't exactly rocket science -- I should know. But, instead of going for the obvious joke (like, for example, I would), the writers do a great job of finding creative ways to highlight the absurdity or humor in each clip.

After we watch a woman on "The Amazing Race" react with a bizarre smile while her fiancé insults her, Hussey proclaims, "Well, either Amanda is on the world's strongest antidepressant, or Chris is heir to a squabillion-dollar fortune, or she just digs guys who treat her like crap. No, it couldn't be that." Later, to introduce a clip from "Iron Chef" featuring tofu, Hussey says, "Seeing as tofu tastes like something you'd scrape off the underbelly of a diseased sea turtle, I can understand why this one has never seen the light of day."

The show's tone of outright scorn is, of course, the only appropriate approach to such material. Still, you have to give a lot of credit to the writers and producers for their unflinching dedication to being as mean as humanly possible. On one clip from the show "Fame," judge Carnie Wilson tells a singer named Gary, "You are so adorable, I want to eat you up!" Cut to Hussey, who proclaims soberly, "Technically, since Carnie had her stomach stapled, she can't eat Gary up. She'd have to throw him in a blender and make a Gary smoothie."

While Hussey is an able enough host, given how bad amateur hosts can be (one word: "Dunkelman"), his cheery, over-the-top shtick is a little too cheery and over the top. I can't help thinking that a more deadpan delivery would not only better suit the show's acerbic tone, but would allow the jokes, many of which are pretty damn funny, to shine through. As it is, Hussey's overblown delivery can be downright distracting. Only after processing his bizarre antics do you notice that what he's saying is a lot funnier than how he's saying it. Hussey has enough courage of conviction to sell it, which is more than you can say for painfully bad hosts. But the show would be a lot more entertaining if he would tone it down a little. In fact, if you cut out some of Hussey's antics, you might have time for more wicked punch lines.

Jokes aside, the best thing about "Reality Wrap-Up" is that its writers know exactly why we tune in to each awful show. They demonstrate their knowledge of our bad taste by showing us only the homoeroticism of "Fraternity Life," only the bitchy catfights of "America's Next Top Model," and only the couples falling apart on "Amazing Race." And when you watch the hot girl on "Real World: Paris" mention that she's a virgin and that she loves getting wasted and doing things she regrets in the same sentence, you start to wonder why you would ever tune in to the other 25 minutes where the roommates choose bedrooms and prattle on about the girlfriends back home they're about to dump.

In fact, the more you watch "Reality Wrap-Up," the less likely it is that you'll watch reality TV at all. After sitting through a full hour of inane backbiting and vapid observations on "For Love or Money," for example, it's downright disconcerting to see the approximately two minutes of worthwhile footage aired on "Reality Wrap-Up."

That's quite a cure for those feelings of helplessness and longing you've been experiencing. But if the show keeps making reality TV look obsolete, its creators might just make their own show obsolete while they're at it. In other words, if the folks at "Reality Wrap-Up" want to keep their jobs, they'd better stop doing them so well.