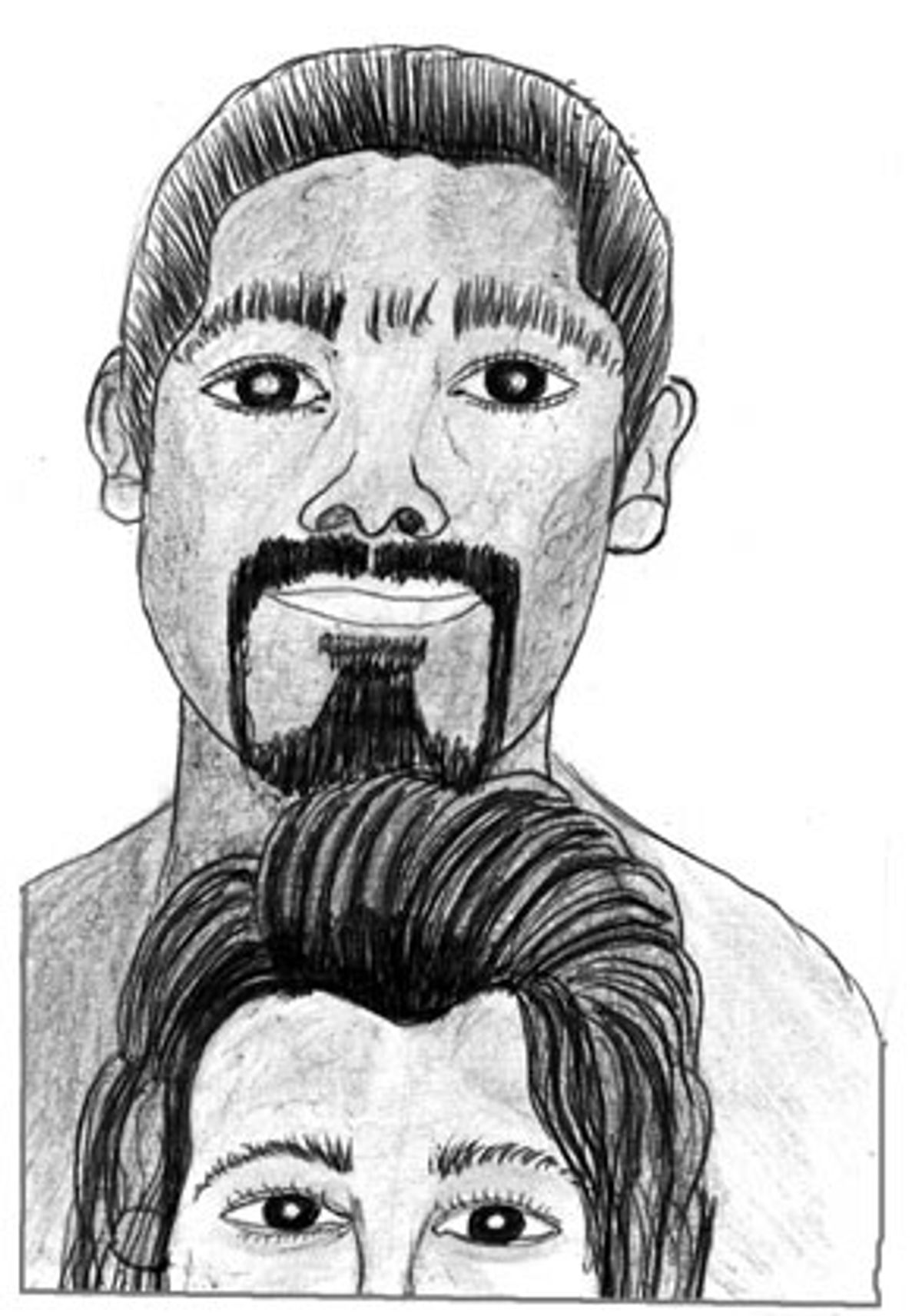 Stranger in my eyes

Man, Dad, you call yourself a man?
You been my enemy since the start
with your bullshit abortion plan.
Weren't there for the first steps that I walked.
Weren't there for the first words that I talked.
It's funny 'cause if we passed each other on the outs,
You'd be a stranger in my eyes without a doubt.
It feels wrong to say I'm half you
'cause the only fatherly love I got
was from da homies in da crew.
Sometimes, it feels like I couldn't raise my own
Because of all those father-son experiences you stole.
I've been deprived of a God-given right.
You should think about that because mom cries at night.
Hope that haunts your cold ass heart till da day you go out.
Until the next time.

To be real, on Father's Day, my mom is going to be the one to receive a card full of love, 'cause my father was never in my life. He was the type to disappear and call moms, saying he need some money. I really don't feel him 'cause he put my moms through hell and back. All I got to say is fuck my dad. Happy Father's Day, mom, I love you.

I don't think you'd wanna call him a man, if you knew the dude. All he used to be for me was money, but he won't even help us out no more, and we're struggling. My mom calls him party boy. All he does is smoke weed, drink, and party all the time. He is a professional bartender. He's probably a pro-bar hopper too. He's gay, but he calls himself bisexual, just like my two exes -- who are now together. He molested me when I was two years old. This is a dead issue. I have a dead beat dad. Daddy didn't love me. Daddy wasn't there.

Dad I remember growing up as a kid, which I still am. You were never really there for me. Every time I saw you it would take another six to seven months to see you again. Every time I would ask my mom if I could go to see you, she would try to turn me against you, which was not wrong of her. You would always ask me when I saw you, "why don't you call me?" But you should have been the man and called me to see how I was doing.

But to make up for all the days, months, and years we were apart you are making up for that.

I give you two thumbs up for being clean for eleven months.

Man, dad, fuck you.
You ain't nothin'
because you cut out like a snitch?
And you act like you all of it
but you really ain't none of it
I remember when your fake self cut
and left me stuck
like Chuck without a buck
I feel you ain't nothin'
and you never will be nothin'
and I'm gonna live without you
and if you died, I wouldn't cry
I would spit on your grave
I remember when I was a young nigga
mom told me my poppa ain't nothing
so my plan was to hit licks and flip chips
so I don't need Poppa for none of
and if I see him walking down the street alone
I will just continue on and go back home
and smoke a fat one to the dome
but you know how the game goes ...
Fo' the niggas that ain't got no daddies:
my daddy ain't nothin'
I have been through hard times
and now it's time to shine
and that nigga betta not ask me for a dime
'Cause what I got is mine.

You would always beat me

I remember when I was in kindergarten. You would always beat me. I was only a little girl and I didn't really know what was going on. It was all because of drugs. Dad, you really hurt me, and even though it got worse by the week, I still love you, because you're my Dad. I've had a hard life, Dad, and I just want to let you know I haven't forgotten that, and I still hurt inside.

I get mad
'Cause you don't even deserve
That label: Dad,
You left me a fable
About a man who works for
AT&T cable
As I sit at this table
That's bolted down to the floor
Livin' behind a four-inch steel door
With time to think
All these questions start to surface
In my mind
They hurt so much
Smoked drugs, so now the answers
Are hard to find
So many questions
So much time
I find you didn't care
It isn't fair
That you weren't there
You're like Yogi the bear
The way you got on
My memory of you is a blank space
You were gone
Like the wind
My momma was strong
Even under the pressure she
Didn't bend
We men
My only question is when
I was a little boy
You never bought me one toy
I'm gonna leave this unfinished
Like you left us
I got to make it for me
And that's a must

The last time I saw my dad

Dang! My dad was one of the best tow-truck drivers in the Bay Area. He worked at all 510 Tow-Truck companies, making bank. But notice how the first sentence says was one of the best. He came from handling crucial car accidents to handling a McDonald's cup.

My dad now stands in front of McDonald's in Hayward with a cup begging for change. When I was eight years old, I found out from my aunt -- who I lived with from the age of three -- that my dad was homeless. As I grew up over the years, it was obvious that my dad's problems lay in drugs. He spent everything on drugs. My dad did have love, though, and would bring me things when I was younger. Even though he may have found them in a dumpster, I appreciated it because at least he was thinking of me. As I grew older, my dad stopped coming around, except for the times when he came to ask for money. My aunt would give my dad from $40 to $100 at one time so that he could get on his feet. He would promise her over and over that he was going to get a job, but never put in the effort. When he did have a job, he lost it in less than one week, enough time to get a good amount of money to cop some drugs to support his habit.

I went to Juvenile Hall and then into a group home when I was a young teen. I stayed in and out of group homes and Juvenile Hall never once going home until I was 16 years old. During that time I had no contact with my dad and when I saw him I was shocked. My dad was usually short and stocky like myself, but my dad was so damn skinny when I saw him! He must have weighed about 115 lbs.

I was locked up at the age of 17 and stayed in Juvenile Hall seven months until I got sent to a boys' camp from which I ran after a two-week stay there. I was on the run again. One night, I was heading to the number 99 bus stop, when I saw my dad at the McDonalds leaving on a ten-speed bike.

My dad just looked at me.

And my dad said, "Who the hell are you? Get away from me!" I just looked at him, pulled out a twenty-dollar bill, and handed it to him, and then I walked away. I felt as though I had lost a loved one. In a sense, I did: I lost my father to drugs.

Thanks to my mom's dead boyfriend

I remember I had my first drink at age four. Bottoms up -- one, two, and three swigs of peppermint schnapps. You just had to give me some because I asked. Now I'm an alcoholic like you were. I hope I don't die falling down drunk with a brain aneurysm like you did.

Thanks for my first drink!

I remember when you beat the living crap out of me every night from getting drunk so much. Thank you for the bloody welts on my back. I remember when the social worker came to the house when I was three or four and got mom and me out the house. We took the first greyhound out of San Diego we could afford, after living in a hotel for a month just to get away from you. Thanks for all the threats on my family!

I remember when you died. Thank you for finally leaving me and my mom alone!

A real man is my father: there was a war in Cambodia, and my dad was a strong man. He carried my grandma and my big sister to Thailand. My grandma was sick and she wanted to be left back, but my dad said no -- he was not leaving no one behind.

It was a war between Khmer Rouge and the United States, but we speak Thai because my father went to Thailand and learned the language. Then they came to America and had me and my two little sisters

Now I'm in jail telling a war story about my dad. That's why I know my dad is a real man: because he showed us a good life in America.

I remember when, I used to live with my mom. Living with my mom was wonderful for the moment because my mom, and dad were just perfect together. Also when my sister had her two beautiful children, Jeremiah and Tone -- those kids were the most funniest little babies I've seen. But for some reason Jeremiah the oldest was the only one who kept following me around.

To tell the truth, I loved it. But now I live with my girlfriend. And now I have to see my nephews once in a while, ain't nothing wrong with it because them kids still know who uncle is. The next time I see these kids, I'm going to be more educated, and have a job. I don't want my nephews to know about my past. I gotta tell them how hard it is, and how hard their grandma, grandpa, and mother be stressing.

But not living with my mom makes me feel bigger about myself, and I got something to prove, that I can live on my own, and don't need my family's help, only if I have to. In conclusion to my essay, when my parents see me in a couple of years they'll say, "I raised a smart and beautiful son."

I have no father.

Established in 1996, The Beat Within is a publication of Pacific News Service