He still believes weapons of mass destruction will be found -- but says Congress should investigate whether intelligence was cooked. 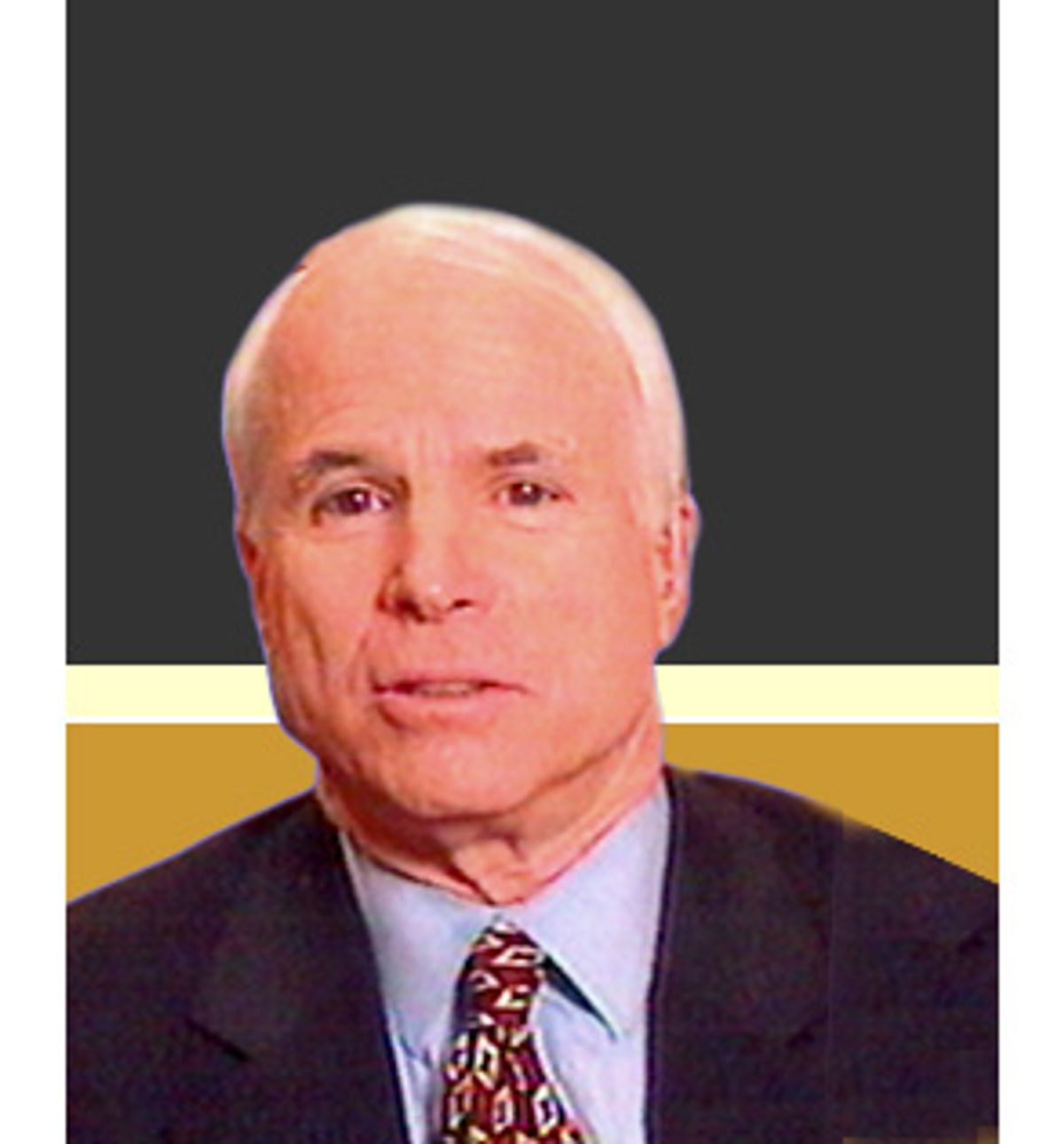 On Wednesday evening, Sen. John McCain, R-Ariz., the No. 2 Republican on the Senate Armed Services Committee, continued his call for hearings on prewar intelligence about Iraqi weapons of mass destruction. But he's also downplaying it as a standard postwar congressional review.

"I hesitate to reach any conclusions until I have complete information and all sides of an issue are heard," McCain said in a telephone interview with Salon.

A supporter of the war, McCain says he is confident that evidence of WMD will be found. He allows, however, that media accounts of intelligence officials accusing the Bush administration of twisting intelligence to justify an invasion reinforced his belief that the Senate needs to review the entire war, top to bottom. This would include not just questions about WMD, but friendly-fire incidents, the president's use of discredited forged intelligence during his State of the Union address, the "brilliant" battle plan, and on and on.

With some Democrats calling for hearings as soon as possible -- and many Republicans trying to stymie such requests, arguing that arms inspectors should be permitted more time to hunt for WMD -- McCain told USA Today on Tuesday that the Senate hearings should take place as soon as possible. Sen. John Warner, R-Va., the chairman of the Armed Services Committee, has told the committee's members that hearings will be held in approximately two weeks.

On Wednesday, however, the chairman of the Senate's Select Committee on Intelligence, Sen. Pat Roberts, R-Kan., said that his committee's hearings would be a closed-door affair. Information would be made available to the public only "when the committee deems it appropriate," Roberts said, according to the Associated Press. Calls for more than that were "simply politics and for political gain," he said.

The issue -- a potentially embarrassing one for the Bush administration, which justified the war in Iraq by painting a picture of a clear and present threat from Saddam Hussein's weapons of mass destruction -- isn't going away anytime soon. Bush's war coalition partner, British Prime Minister Tony Blair, is facing a political fight in England, and other allies are asking tough questions about whether U.S. intelligence was accurate -- or misrepresented. And while the White House has sought to extricate itself from the controversy by lowering expectations as to what evidence might be found, or some intriguing wordplay, the Intelligence Committee's vice chair, Sen. Jay Rockefeller, D-W.V., fully stepped into the fray on Wednesday, charging that he thought it an open question "whether they [Republican Senators] really want to get to the facts of what actually happened."

Though McCain -- who has been something of a thorn in President Bush's side since the two fought tirelessly, sometimes bitterly, for the GOP presidential nomination in 2000 -- backed the war, his call for hearings seems to place him more on the side of Rockefeller than on Roberts'. Salon caught up with McCain on Wednesday afternoon to get his thoughts on the controversy:

As the No. 2 Republican on the Armed Services Committee, have you been privy to WMD intelligence that the rest of us haven't seen?

Why haven't any WMD been found yet?

Do you think it ultimately matters if we find them or not?

I think it probably matters to the Europeans. I think most Americans support the president after they saw the 9- and 10-year-old boys come out of prison and the mass graves and other testaments to the oppressiveness of this regime. But I think it matters to our European friends.

Does that matter at all, whether or not the Europeans are mad at us?

I think it matters. We're always concerned about world opinion. But is it a terrific blow? No, I don't think so.

One argument goes that U.S. credibility matters a great deal, and if we lose that over this WMD affair, perhaps we won't even have the British or Australians on our side when we next think we need to fight as we did in Afghanistan and Iraq.

That's an assumption I'm not willing to make. I believe we will find evidence of weapons of mass destruction.

Rep. Henry Waxman, D-Calif., has been upset because intelligence that had reportedly been widely discredited -- forged information saying that Iraq tried to buy uranium from Niger -- was cited by the president in his State of the Union address. Do you think he has a point? Do you share his concern?

I think he has a point and I think it's one that should be addressed, but I hesitate to reach conclusions until I have complete information and all sides of an issue are heard. Congressional hearings and oversight are an appropriate way to do that. Henry Waxman is a fine man, and I admire him. He is also known as pretty partisan Democrat. We have to take everything into consideration.

On Wednesday, Senators Warner and Roberts and Congressman Porter Goss [R-Fla.], chair of the House Select Committee on Intelligence, said that they intended to limit the review of prewar intelligence on Iraqi WMD to intelligence documents provided by the Bush administration and will hold only closed hearings. Is that the best way to go about this?

It may be appropriate for the Intelligence Committee because of the classification of the stuff that they handle. But Senator Warner, who as you know is the chairman of our committee, is going to start hearings in a couple weeks -- an open hearing with General [Tommy] Franks [the former commander in chief of U.S. Central Command]. I think we need a review of the entire conflict, of which WMD will be a part. We always do post -conflict oversight hearings so we can learn lessons. I'd like to know more about the tragedy of the friendly fire incidents that happened, I'd like to know more about what went into the brilliant strategy. The issue of weapons of mass destruction is just one of many.

Ahmad Chalabi, part of the administration-backed three-man leadership council for the Iraqi opposition group, the Iraqi National Congress, recently denied allegations that he gave the U.S. any bad intelligence on Saddam's WMD. According to the Philadelphia Inquirer, Chalabi said that "We gave very accurate information, and we produced people who we handed over to the United States who told them very significant things. The weapons of mass destruction are in Iraq." Do you believe Chalabi about this and do you trust him in general?

In general I have no reason to mistrust him. I've been at meetings with him, but I've never discussed this issue with him, so I've never drawn any particular conclusion. I think he's a source of information and one that should be evaluated with all the others. I certainly don't disbelieve him.

His critics have argued that his opposition to Saddam was so strong -- and justifiably so -- that perhaps he was given to exaggerating the threat so as to better secure the support of the U.S. for toppling the regime, so he could then return to Iraq and head up its government. And some say the Bush administration relied too much on his information.

I have no information on that. I was never brought into those kinds of meetings, so it's impossible for me to make a judgment on it.

Some say that the Bush administration oversold the danger so as to better rally the nation toward war. Even some supporters of the war are beginning to say that -- on Fox News Sunday, William Kristol, editor of the Weekly Standard, allowed that while the war was still just and prudent, he was "very skeptical" that WMD would be found. He went on to say that "it is fair to say that if we don't find serious weapons of mass destruction capabilities, the case for urgency, which Bush and Blair certainly articulated, is going to be undercut to some degree." Kristol was one of your big supporters during your presidential race, doesn't that give you at least a moment for pause?

I just think -- as I said -- I think we will find weapons of mass destruction. Now, I think it's entirely appropriate now that regime change has been orchestrated -- and though the danger is certainly not over, the mission is "accomplished" -- it's appropriate to have a hearing.

Though White House spokesman Ari Fleischer said Wednesday that hearings were an appropriate part of Congress' oversight role, it seemed at first that the administration didn't want the Senate to hold any hearings on this. Have you heard from the White House about your call for hearings?

No, and I don't know of any disagreement. John Warner has already scheduled the first hearing.

Beginning last fall, the media has told story after story of senior intelligence officials saying that the administration pressured their agencies to cook information to better sell the urgency of the war and the danger posed by Saddam's regime. What was your response when you read those stories?

Well, I thought it was another reason why we should have hearings on the entire issue of weapons of mass destruction. It's an issue that needs to be addressed. But I hesitate to jump to conclusions without complete information.

You've been a big supporter of this war. Didn't the stories concern you, make you wonder if perhaps you too had been misled by twisted information, as these officials told reporters?

It made me believe, again, that we need to have hearings and look at this issue. Look, it disturbed me when we heard of young people killed by friendly fire. We need to find out if any of that was at all unavoidable. It concerned me during those few days when we were bogged down. A lot of things concerned me throughout the conflict. It's why we have congressional oversight.

What would you say to someone who had lost a loved one fighting in Operation Iraqi Freedom and was upset that the WMD had not yet been found?

I would say that, I hope you'll have patience, No. 1. No. 2, we appreciate your loved one's sacrifice, and that sacrifice was not in vain because the people of Iraq have been freed from one of most brutal dictators on earth and will now have a chance for freedom they never would have had while he was in power.

The Associated Press counted more than 3,400 Iraqi civilians killed in the war. Was it worth it?

When you look at the size of the conflict, the losses -- as tragic as they were --the losses both civil and military were remarkably low.

According to polls, the American people don't seem to care much about this issue. Why don't they seem to, and why does the media seem so interested in it?

I'm not sure the American people don't care. I think they may be reserving judgment until they have complete information. It's the media's job, of course, to raise these issues and they're playing their usual vital watchdog role.

Why would Saddam destroy his WMD before the war, as Defense Secretary Donald Rumsfeld speculated he might have done?

I do not know. But I don't know why he refused to cooperate with the inspectors. I never knew why he invaded Kuwait! There's a whole lot of things Saddam Hussein did that I never understood.

I know you think the WMD will be found, but if they aren't, will that change anything?

I'm assuming something will be found. It's hard for me to speculate about nothing being found.

But if they aren't, will there be any long-term effects either domestically or internationally?

I don't know. I really don't know the answer to that. I know that most Americans feel it was justified with or without the discovery of weapons of mass destruction. Whether or not that would change over time, I just don't know.