Ernst Lubitsch's 1932 masterpiece, the most sophisticated of all American romantic comedies, resurfaces at last, both on DVD and (yes!) on the big screen. 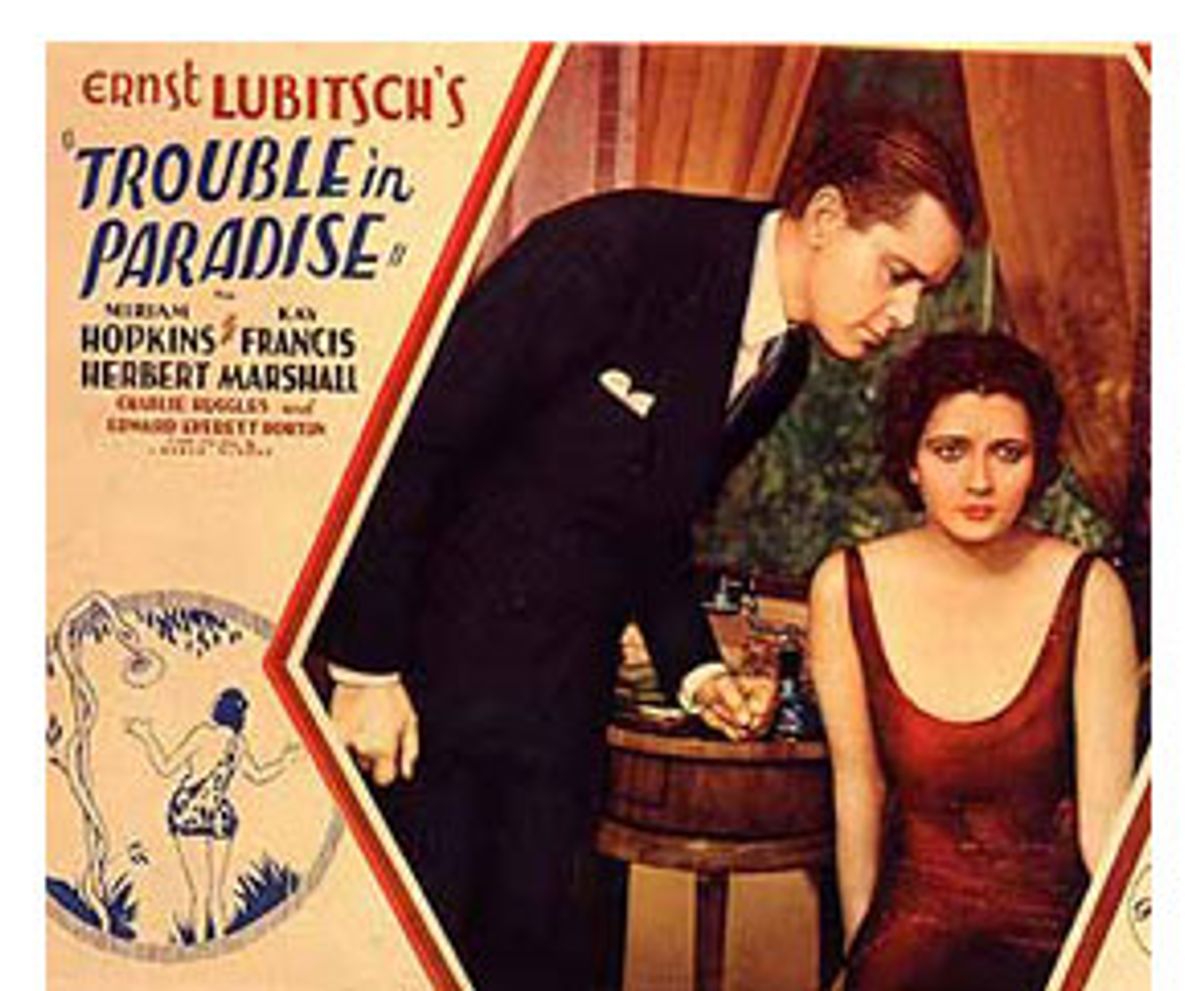 "Marriage is a beautiful mistake which two people make together." That line, from "Trouble in Paradise" (1932), defines the spirit of this most sophisticated of all American romantic comedies. It's a combination of the words themselves, both high-flown and hardheaded, and the way Kay Francis delivers them, in a breathy moonstruck exhalation that belies the tone of bright disengagement.

"Trouble in Paradise," directed by Ernst Lubitsch and written by Samson Raphaelson (based on a play by Aladar Laszlo), is not the funniest or deepest American romantic comedy. Both those honors go to Preston Sturges' "The Lady Eve." Nor is it the wildest -- that would be Sturges again, with "The Palm Beach Story." And for the sweetest and most graceful, you'd have to look to another Lubitsch-Raphaelson collaboration, "The Shop Around the Corner." But in both attitude and execution it remains the perfect distillation of bemused, offhand elegance. It would be 43 years before American movies produced another comedy as sophisticated, with "Shampoo." (The other leading candidates -- Ingmar Bergman's "Smiles of a Summer Night" and Clare Peploe's "Triumph of Love" -- are European.)

For a long time, "Trouble in Paradise" has been more talked about than seen. It's one of the most famous and one of the most elusive of classic American movies. This week, a restored print opens a Lubitsch retrospective at New York's Film Forum, but there's no need for those of you who live elsewhere to miss out. The film has been released by Criterion DVD in a version that continues the company's loving commitment to restoring great movies.

It's a movie that feels both of its time and ahead of all the times that have followed. You can imagine '30s audiences experiencing it as another of the delights that Hollywood routinely delivered in that decade -- a decade, as far as movies are concerned, far more sophisticated than our own. But today, this film's blithe attitude toward love and sex and infidelity is strikingly, gloriously out of tune with the moralism of contemporary American movies.

Love is theft in "Trouble in Paradise." Its two leads, Gaston (Herbert Marshall) and Lily (Miriam Hopkins), are jewel thieves and people who, whatever else they shrug off, take the idea of having your heart stolen very seriously. Love means surrender here, and surrender means giving up your independence, inviting the possibility of compromising your style. In this world, style is paramount.

Gaston and Lily meet in Venice, where he's posing as a baron and she as a countess. Over a moonlit supper, the two return the items they have filched from each other (though Gaston does keep Lily's garter, kissing it before he returns it to his pocket) and recognize that they're soul mates. A year later they're in Paris, living in reduced circumstances (or what passes for reduced circumstances in a Lubitsch movie, anyway). One night at the opera Lily steals a jeweled handbag from the perfume heiress Madame Colet (Kay Francis). When Gaston reads about the reward she is offering for it, he reckons he can get more that way than by selling it. He returns the bag, pretending to be one of the titled idle made nouveau-poor by the Depression. Madame Colet is as smitten with him as he is with her, and impulsively hires Gaston as her secretary. Gaston brings Lily in as his assistant, the two of them planning to stay just long enough to rob the safe. But sharp little Lily spots the thievery already in progress: her larcenous prince has become willing to let himself be robbed by Madame Colet -- of his heart.

As conceived by Lubitsch and Raphaelson, the seduction that plays out between Herbert Marshall and Kay Francis is a witty inversion of sexual roles. Gaston takes over everything from running her business and household to instructing the cook not to feed Madame potatoes (he's as solicitous of her figure as of the figures in her bank account). It's Gaston, though, who is in danger of being overtaken. Much of the pleasure of Gaston's dedication to Madame Colet comes from seeing the elegant Marshall allow himself to be turned into that most seducible of creatures -- the man in thrall to a woman's erotic presence. Here Marshall gives us something far different from the troubled unerotic decency he would later project as Bette Davis' husband in "The Letter."

In another of the movie's sexual reversals, it's the women in "Trouble in Paradise" -- the blond Hopkins, her brassy American straightforwardness submerged in a masquerade of European chic, and the pale, dark-haired Francis, her jewels and gowns the setting that modifies her forthright sexual ripeness -- who are creatures of the flesh. Marshall has the ethereal quality usually reserved for demure romantic heroines. His double-breasted suits and tuxedos are, naturally, his second skin, and his vaguely Asiatic obelisk of a face, topped by the arching eyebrows that adorn his delicately wrinkled brow, wears an expression pitched right between amusement and concern. He's a male sylph, a spirit of the lightly perfumed air.

There's a wonderful contradiction between the way Lubitsch looked -- short, swarthy, rough-hewn -- and the casual classiness of the movies he made. You see that contradiction reflected in his approach to sex. Lubitsch had the talent of rendering risqué and even out-and-out dirty jokes with a gossamer refinement. When Gaston and Lily go to bed for the first time, Lubitsch shows us a series of shots beginning with the couple lying on a couch in his hotel suite. There's a dissolve to the now-empty couch (suggesting that they have moved elsewhere), and then shots of the lights being extinguished, the curtains opened and Gaston's arm, now denuded of his tuxedo jacket, hanging a "Do Not Disturb" sign on the door to his suite. It's too clear, too frank, to be classified with the coyness movies would later resort to, the camera moving from a clinching couple to a roaring fireplace and then a dissolve to glowing embers.

Lubitsch goes even further in a montage of Madame Colet's servants saying compliantly, "Yes, Monsieur La Valle!" or "No, Monsieur La Valle!" The comely maid coyly answers, "Maybe, Monsieur La Valle!" but the topper comes in a shot of Madame herself lying on her back, on an exercise mat. She has lifted her legs up and over so her toes are resting on the floor behind her head; her graceful rump thrusts out with innocent pertness. She asks, "Is this what you mean, La Valle?" It's an outrageous moment, a really filthy joke delivered with absolute propriety.

The trouble with trying to define "the Lubitsch touch" is the difficulty of pinning down the sublime. "Trouble in Paradise" moves along so smoothly that we're scarcely aware of any tension in the style. And yet it's there, in the contrast between Continental society and the (implicitly American) raffishness of the two interlopers (particularly when Hopkins, in the midst of a con, rattles on in Spanish, replete with Castilian lisp, and then German, never altering her flat American accent). And it's present in Madame Colet's two other suitors, Edward Everett Horton and Charles Ruggles, those quintessential oddballs of American comedy. They function here like the rustics in a Shakespeare comedy. Too bumptious to enter the rarefied world of the leads, they're the unwitting embodiments of the movie's comic id.

Unlike the other great romantic comedies, "Trouble in Paradise" contains not a whiff of melancholy or regret -- that would violate the dégagé tone. Its mood is expressed by Pauline Kael's description of a memoir that Raphaelson published in the New Yorker, in which, she wrote, "emotions and ... control [are] in complete harmony." For us, the melancholy comes not while watching the picture but afterward -- a keen awareness of the sophistication American movies have let slip through their fingers.