I've got the guts, the grit and the fishnet stockings, but now, minutes away from the Air Guitar Championship, do I have that elusive quality of "airness"? 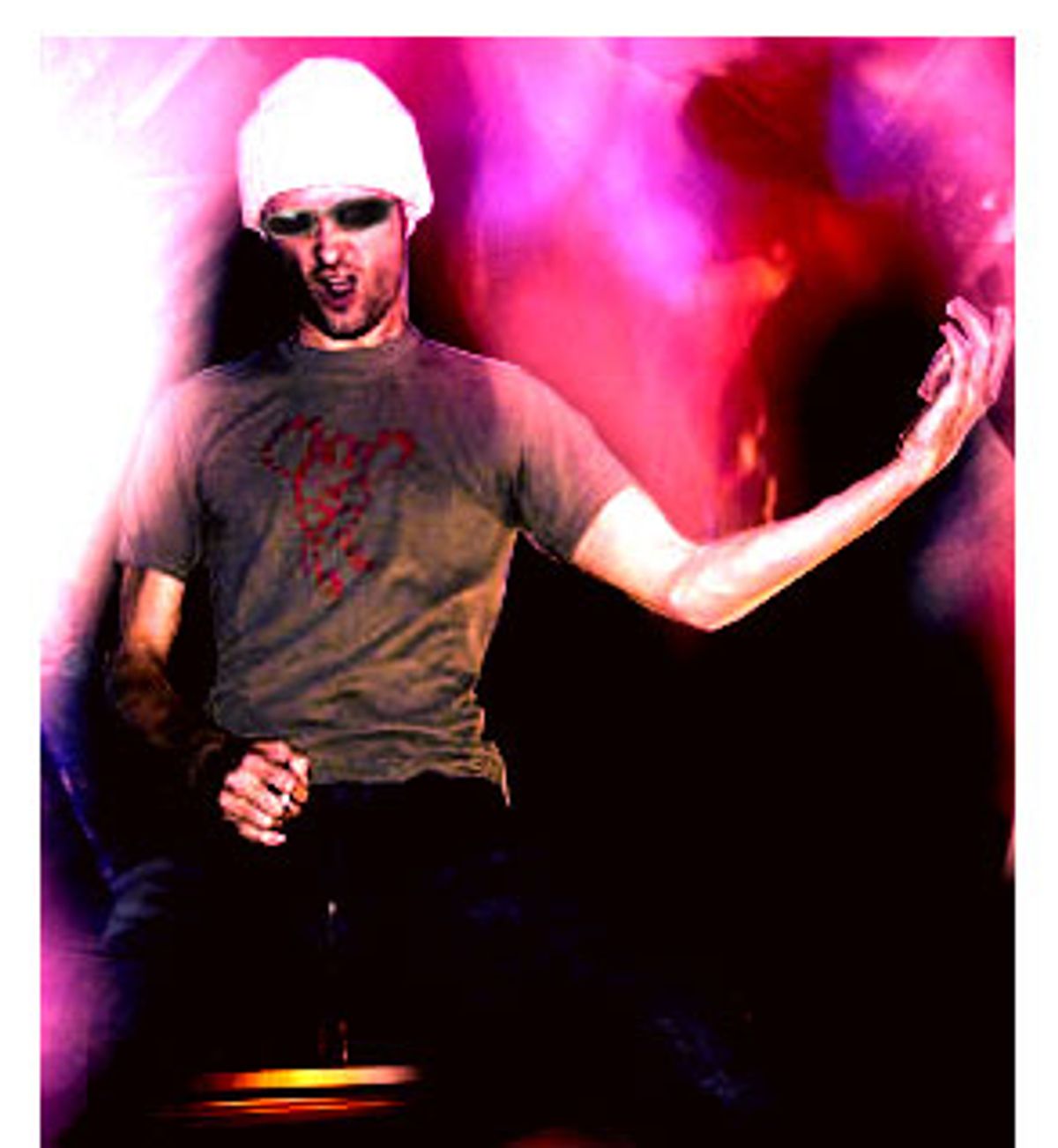 "So, can we use real picks, or should I just use my air pick?"

There are 20 of us, all contestants in the first annual United States Air Guitar Championship, and we are crowded into the top floor of the Pussycat Lounge, a dingy nightclub in Tribeca with a seedy nudie bar on its lower level. At our required orientation session, Paulie Legs, a certified CPA in an AC/DC T-shirt and jeans -- which I suspect he doesn't wear to his day job -- ponders the pick issue. The rest of us down free beers and cans of Red Bull energy drinks as Cedric Devitt, the event co-founder and organizer, gamely explains the air roadie policy; Yes, they are allowed, but the roadies must leave the stage after they help the contestant on with his or her air guitar. Then Cedric collects our music, from Dokken to Hole to the theme song from "Fame," from contestants with stage names like The Goober, Trans Am Mama, and Johnny Rocket.

As he explains that only five of us will advance to the second round, Paulie Legs pipes up again: "So, not everyone gets a second chance? That's bullshit."

These people aren't messing around.

Havens for the semi-talented, air guitar competitions have been springing up all over the world, in Europe, Australia, New Zealand and even Japan. Though the Air Guitar World Championships have taken place for seven years in Oulu, Finland, Americans have yet to make their presence felt at this favorite teen-bedroom art form, even though we may very well have invented it. Along with 17 other air guitar hopefuls I am here to set things right. We will take our turns at 60 seconds in the spotlight, and the winner of tonight's competition will compete against the winner from another regional in L.A., with the final winner flying off to Oulu to compete against the big dogs in August.

Though I am pretty loud and garrulous in traditional social interaction, I am not given to public performances of any sort. It just took one humiliating off-key solo performance of "Let The River Run" at a middle-school fundraiser to retire me from the stage. Now do I have what it takes to face the crowd again, and maybe even banish my middle school ghosts forever?

Prognosis so far: not good. I seem to be the only contestant who hasn't had a passion for air guitar bred in the bone. One performer, Lance "The Shred" Kasten, a wiry 41-year-old who calls himself the "old Geritol" of the contest, says without a trace of irony, "every day I play; when my wife goes to work, I go downstairs and jam." Craig "Czar" Zahler, a goateed 30-year-old chef from New Jersey and a self-proclaimed metal head, tells me, "I've played air guitar seriously for the last 16 years; I do not see air guitar as a joke, but as the most intimate way to unite my heart, mind and body with music."

I've been hoping that my utter lack of talent would be no impediment here, but it turns out that around half of the contestants actually play guitar. Fortunately, many of them see air guitar as a totally different enterprise, and sometimes a more exciting one. They are at their best when not bound by real strings and their own physical limitations. Johnny Rocket, 33, dressed in a rumpled T-shirt and jeans, explains, "It is a totally separate animal because when you play the real guitar, you have to focus on fingering; it is confined. Air guitar is free; it is about emotion and energy."

Contestants are splayed out all over the room, some pulling on black wigs, dirty, torn rock-band T-shirts, sparkly tops or leather pants. I was sure I was going to chicken out, so I didn't pack myself a special outfit. I'm still wearing my boring, white button-down, black pants, and dirty Converse from work. I call my friend in a panic, and he comes to the rescue, hand delivering a tight, hot-pink and black striped 80's dress, fishnets and acrophobia-inducing white heels.

While I await the arrival of my makeshift stage costume, panic once more begins to rise in my chest and I start wildly searching for any last-minute tips. From Cedric: "Don't be too drunk." From Super Julie, a 29-year-old social work grad student in a silver spandex body suit and green high heels: "Pretend to be the biggest rock star ever."

Great, but how? Masterblaster, a graying former air guitar champ from the '70s, loiters downstairs by the bar and offers to be my patron saint for the evening. He offers a solo-length pep talk, concluding with, "You have to be the guitar for the night, you cannot be shy. Remember, air guitar is not a sport, but a state of mind." With this, he pats me on my shoulder and sends me on my way.

It's 9 p.m. The show starts in half an hour, and the place is packed with mussed-looking hip kids -- suckers -- who've paid $8 to see my performance. A slow-moving line forms outside of the club and snakes all the way down Rector Street.

The performers are still corralled upstairs, trading stories and pandering to the enthusiastic journalists lining the walls and scribbling into their notebooks. There are already a few standouts and press darlings, even before show time: David Jung, a 31-year-old actor getting set to perform Extreme's "Play With Me" under the guise of C. Diddy, or Chink Diddy. He promises to redefine Asian stereotypes through his "Asian fury" air guitar style and his loosely tied kimono with red leggings, a Hello Kitty breastplate, and a studded leather belt.

Then there's Lucy "Snatchface" Alibar, 21, a petite, scarily energetic blond with pigtails, short skirt, cropped belly shirt, and a painted vagina on her head. She mugs wildly for cameras. While rehearsing her moves, a series of jumps, splits and funny faces, she explains, "In high school, guys would never come and talk to me, and I would always say, 'What, do I have a vagina on my face?' So this is just a physical manifestation of my insecurities."

Dan "Bjorn Turoque" Crane, a 32-year-old Bruce Springsteen lookalike, sports a bandana, a slim, gray leather tie and gaudy black-and-white checked shirt. He's all confidence and rock-star bravura: "I know I have a chance, I just have 'quois' as the French say, hard to explain, but I have it." Bjorn plays guitar and cites Bob Mould and Pete Townsend as his actual guitar heroes, but when he picks an air guitar hero, he strays out of the genre entirely, selecting tennis player Bjorn Borg, his namesake. "He has real grace on the court, great moves," he explains, "and that is what this is all about, grace, style and power."

And now we're ushered to the stage. Everyone hurries for just one more can of beer or fortifying shot. (So much for Cedric's advice about inebriation.) I head to the strip club bathroom to practice a few high kicks and tough-girl sneers, and am gratified when the strippers murmur approval.

Minutes later, all 18 of us line up by the side of the stage, hearts palpitating, fingers stretching, getting introduced to the three judges and the scoring system. Our fate lies in the hands of three judges, Adam Crystal, a classically trained musician in the band Dopo Yume, Ulton Guilfoyle, curator of film at the Guggenheim Museum and a Live Aid concert producer, and Gavin McInnes, co-founder and publisher of Vice magazine. A tough bunch. Each performer has 60 seconds to wow them. The judges score on a 4.0 to 6.0 point scale based on originality, charisma, feeling, technical ability, artistic merit, and "airness." Cedric defines the elusive "airness" as "the extent to which you are watching a performance that is not an imitation of playing the guitar but rather a form of art unto itself."

It's on. Some contestants sensually caress their air guitars, others thrash around with it like it was a hot potato. Almost everyone pays homage to the classic moves: the windmill, the high kick, or the passionate, down-on-one-knee guitar solo. Some keep their eyes open, others close them rapturously. A few contestants seem to forget about their air guitar entirely, throwing in snaps, claps and wild hip gyrations. Snatchface performs dozens of kicks and jumps, and her act ends up costarring her purple underwear. C. Diddy, red-faced, tongue out in concentration, attempts a behind-the-back air guitar solo.

I've chosen Joan Jett's "Bad Reputation." I flail, I thrash, I shake, my glasses fall down my nose, my hair plasters itself to my sweaty forehead. I look like I am manhandling a bag of invisible eels.

But somehow, after I finish, there's loud applause, flash photographs and cheers. I feel somewhere between truly exhilarated and awfully nauseated.

My performance is deemed "horrible" by Gavin and "terrible" by Adam. At least, they say, "you were better than the other press chick." (The press chick in question performed a rather tentative rendition of Avril Lavigne's "Skater Boi," which was met with tepid applause and some loud boos. The host scolded the booers, saying, "That is not the spirit of air guitar!")

Not surprisingly, I do not advance to the second round. But C. Diddy, Bjorn Turoque, Super Julie, The Shred, and Rufus Sewer, a dapper performer in a long, white silk scarf who describes his style as "Midwestern sexuality," all do. This time around, contestants all have to perform to the same surprise song: The Smashing Pumpkins' "Rat in a Cage." Each brings his or her unique stylings to the proceedings; sweat flies, fists pump, shirts are removed. But in the end, to wild cheers of "the chink is going to go all the way," C. Diddy emerges victorious, with Bjorn Turoque taking second place.

The lights come up and I slink back to the bar while cameras swarm over the newly crowned winner. An hour later, I'm still flushed and flooded with congratulations, thumbs-up signs and post-performance beers from a forgiving crowd. It's been a glorious night -- the couch potato's version of the American dream, a brief taste of rock stardom without any of the laborious studio time, nail-biting demo shopping, or, you know, having to practice playing the guitar.

Or, as Cedric puts it, "Air guitar is attainable by everybody. Not unlike falling in love, it could happen to anyone -- and everyone can do it."

Elana Berkowitz is a writer based in New York.