With her fourth album, titled simply "Liz Phair," the erstwhile queen of nasty indie rock grows up (sort of) and plays radio-friendly pop (mostly). She says that's always where she was headed. 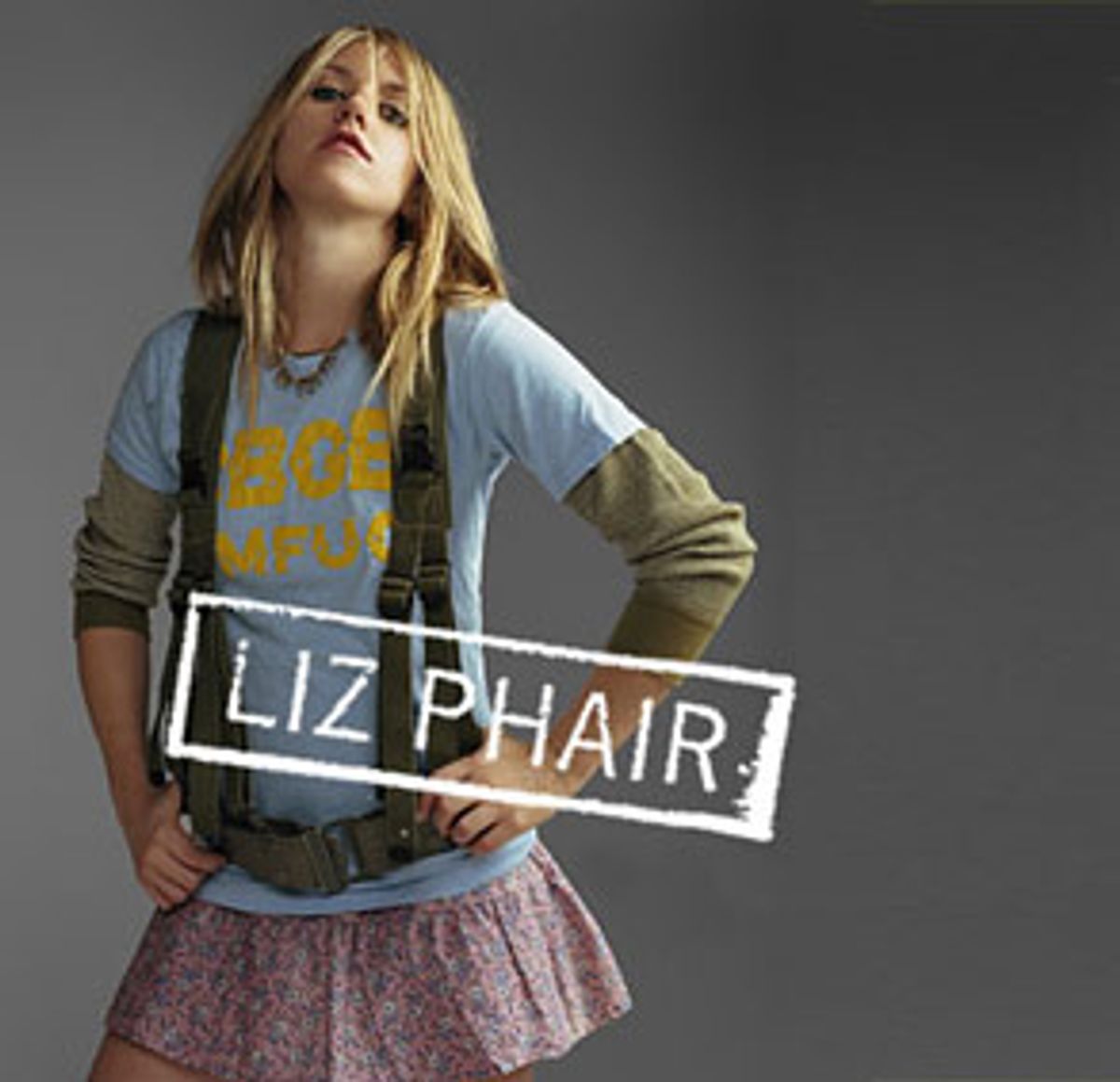 For 10 years, critics and members of the indie rock faithful have been waiting for Liz Phair to make an album that sounds like, well, Liz Phair. That is, the old Liz Phair -- the one whose screwy guitar chords, lo-fi sound and fuck-you (or, rather, fuck-me) lyrics made her 1993 debut "Exile in Guyville" a veritable alt-rock blockbuster that sold more than 200,000 copies.

With 1994's follow-up "Whip-Smart" and 1998's "Whitechocolatespaceegg," Phair left behind the four-track, the dirty talk and the exhausted take on relationships that made "Guyville" so powerful, in favor of a slicker, more conventional pop sound both musically and lyrically. Where "Guyville" had Phair angrily declaring, "I wanna be mesmerizing too!" over hand claps and guitars, "Whitechocolatespaceegg" had her feeling "the sun on my back" and smelling "the earth in my skin" over a backing band -- keyboards and all. With the release of this month's "Liz Phair" -- reaching stores on June 24 -- she's gone even further. Upbeat and scrubbed almost clean, "Liz Phair" is actually radio friendly -- so much so that you might be inclined to pass it on to your Christina-loving teenage sister rather than file it between Pavement and Polvo in your own record collection.

But don't. At least not just yet. "Liz Phair," produced in part by the Matrix (i.e., the folks who've brought us Avril Lavigne), may sound at first like a disc for the sub-17 set, but there are traces of the girl who made "Guyville" all over it. Phair's been taking a pre-release beating for this record, and not just from my boyfriend but also, and probably more important, from actual rock critics. In Spin, Chuck Klosterman gave the new record a B-minus and put it this way: "[On 'Guyville,'] Phair deconstructed relationships with an insight that didn't seem mortal. Now she plays videogames with some slacker dude." But "Rock Me," Phair's song about hanging out with the cute kid and his Xbox, isn't that simple. Shouldn't she get some points for subversion? Admit it: An empowered, 36-year-old, divorced single mom who picks up a guy nine years younger and uses him for sex kinda rocks.

Speaking with Phair by phone on the eve of the scaled-down Field Day Festival (originally planned for eastern Long Island, the festival was moved at virtually the last minute to Giants Stadium in East Rutherford, N.J.), I ask what she makes of people who continue to lament that she hasn't made another album like "Guyville."

"I don't know what to say," says Phair, with a trace of irritation. "I'm really happy that I made 'Exile in Guyville' -- I love that record. But I don't know that it's possible for me to go back and make a 'Guyville.' That was really a product of me being 20 and having nothing else to do but sit around and get stoned and play guitar all day long." After her annoyance subsides, she adds, " I think people who choose to keep one thing that they do and just circle it again and again -- that's valid. That's great, but that's just not the kind of person I am."

Although "big sounds" came through on "Whip-Smart" (think of "Supernova") and "Whitechocolatespaceegg" (the title track, or "Polyester Bride"), this remark still comes as a bit of a surprise. It's been easy to assume all along that Phair's steady drift toward the mainstream came from an impulse outside herself -- from some corporate pressure to capitalize on the success of "Guyville" by producing songs that are attractive to millions rather than thousands. In fact, Phair explains, each of her subsequent records has come closer to the way that she wants her music to sound.

"I used to feel afraid of being in a room with 'real musicians,'" she confesses. "I didn't feel like I had a voice enough to say what I wanted or to get to a place where the song felt like what I wanted. As I've been working, I've become more comfortable in those environments -- and they're less lo-fi and more hi-fi. I feel comfortable experimenting." It's hard to believe, but the same woman who redefined bedroom politics with songs like "Guyville's" "Flower" ("every time I see your face/ I get all wet between my legs") and "Whip-Smart's" "Chopsticks" ("he said he liked to do it backwards/ I said that's just fine with me/ that way we can fuck and watch TV") was actually afraid of calling the shots in the studio.

Phair's present self-possession was hard-won. Her marriage, subsequent divorce and newfound single-mom status, she says, have all made her tougher: "Going through what I went through was really difficult, and coming out on the other end OK made me feel pretty powerful as a person," says Phair, now 36. And the same experiences that differentiate the old Liz Phair from the new have also defined "Liz Phair." Where "Guyville's" appeal resided in its universality -- whoever you were, there seemed to be a song on that record that described your feelings about relationships -- the new record's strength lies in its intimacy. That the record is self-titled is no coincidence: These songs are Liz Phair.

Take, for example, "Red Light Fever," a track about a relationship that stalls because the guy won't commit. "That was about a really intense relationship that I had right after my marriage. I thought we were going to get married," Phair says. "It was very messy but very passionate. I watched him being really self-destructive and really torn -- he couldn't decide which way to go. He couldn't move ahead with me in his life and he couldn't just stay where he was. I couldn't help him."

Then there's "Friend of Mine," a slower, sorrowful description of post-breakup exhaustion. ("I don't have the heart to try/ one more false start in life/ It's been so hard to get it right.") When I ask Phair about it, she says ruefully, "That was also about the relationship after the divorce." "Little Digger," about Phair's six-and-a-half-year-old son, "is me imagining," she says. "It's me giving him a voice. The hardest thing about divorcing was that he had no say in the things that were happening to him. What I do will affect this person forever. It's his life, and that's what this song is about."

Still, for all the emotion underpinning what are, for the most part, upbeat pop anthems, Phair insists that everything is going pretty well. "I have a million things to do. I don't have this uninterrupted freedom and I can't get stoned all the time anymore," she says, "but I'm really more enjoying my day-to-day moments. I'm really in them as opposed to standing outside myself going, 'What if you do that? What will happen then?' I think I'm much happier."

Still, just as "Divorce Song" from "Guyville" perfectly described the common early-adulthood experience of corrupting a friendship with sex -- "It's harder to be friends than lovers/ and you shouldn't try to mix the two/ 'Cause if you do it and you're still unhappy/ Then you know that the problem is you" -- so a handful of Phair's new tracks capture the tensions in more mature relationships nearly as well. We shouldn't write Phair off because she became a well-adjusted adult. We should congratulate her instead.