What we're listening to 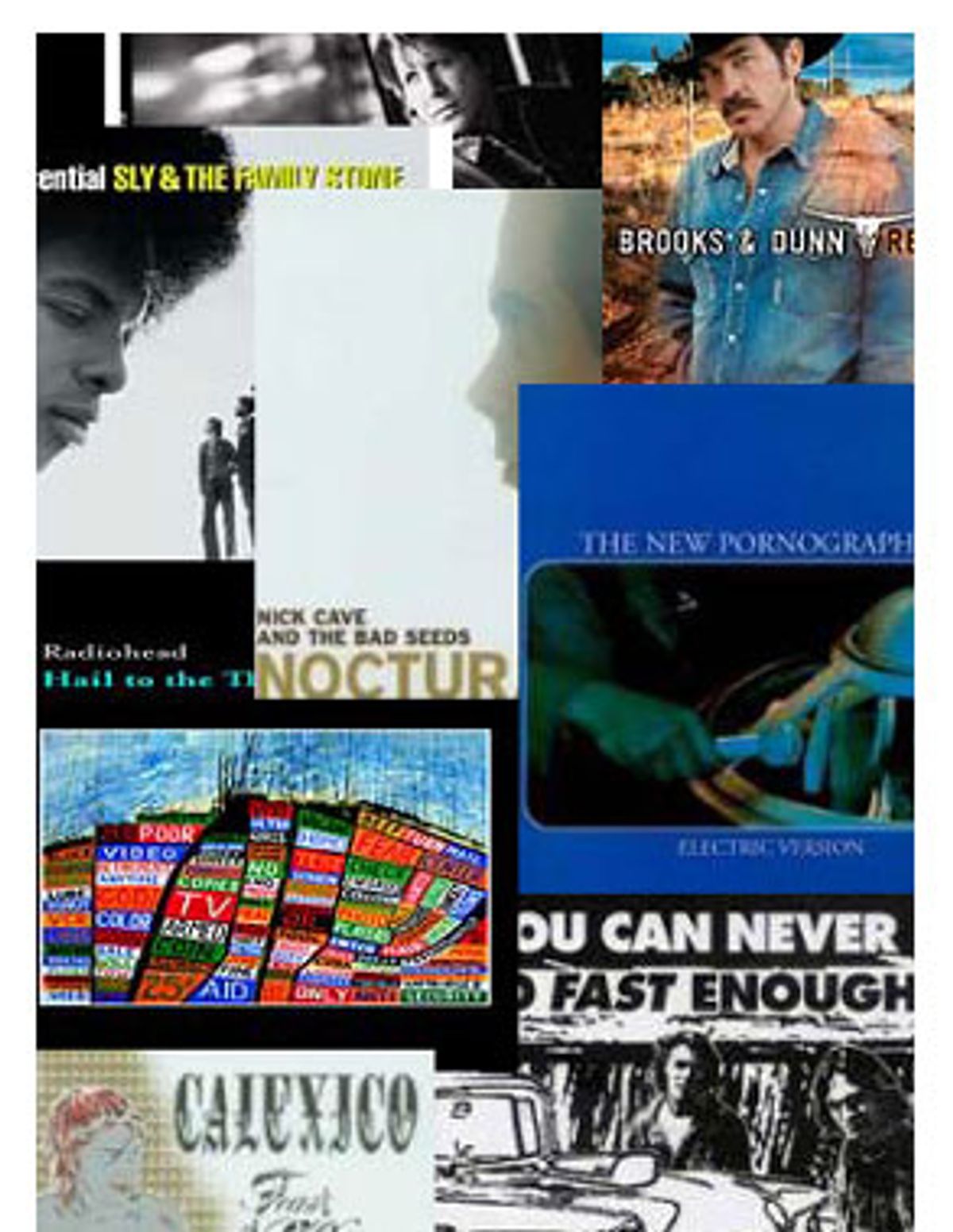 This band's flippant name only obliquely hints at the glam-charged, wordplay-driven pop wonders it lovingly assembles out of cascading layers of anthemic vocals, pushy keyboards and chiming guitars -- with Neko Case's voice soaring high above the sonic melee. To my ears, "Electric Version" feels slightly less inspired than the Pornographers' debut, "Mass Romantic" -- there's a tad less variety, a little more of a sense of formula repetition. But what a tasty formula.

"Is this song about love or death?" asked my 8-year-old daughter over breakfast, as she attempted to puzzle out the loopy lyrics of "I'm On Fire," the whacked-out 15-minute romp that closes "Nocturama," Nick Cave's latest album. Some months earlier, I had told her that Cave's songs "were all about love or death, and usually both." She hadn't forgotten.

Love, I told her, this one's a love song! Yes, it's true, Cave specializes in a gothic delivery style that takes cuts like the optimistically named opening track "Wonderful Life" and makes them sound like dirges mourning millions of plague deaths. But on "Nocturama" he's in fine form and fettle, giving his listeners reason to hope, to live, to break out of the gloom and into the light.

One song, "Bring It On," even aspires to anthemic status for the troubled yearning to be free of their emotional baggage. In "Bring It On" Cave declares his willingness to handle all the pain, all the sorrow, "all your shattered dreams." It is at once an acknowledgment that the world is a hurtful, awful place that crushes our souls, and a declaration of resistance, a willingness to embrace and encompass the pain. We are human, we can take it!

It's a song that can change a life. A song that burrows its way into the deepest part of your being, and makes you glad to be alive, no matter what.

The veteran indie-rock outfit from Tuscon, Ariz., doesn't break any new ground here -- but that's perfectly fine. Calexico has cruised this same vivid musical terrain for years: Hipster rock band picks up jazz somewhere along a desert highway and guns for the Mexican border. Plaintive waltzes adorned by lilting strings and splashes of accordion ride shotgun to gritty surf guitar, slinky horns and head-bobbing mariachi grooves. Light some candles, cork a bottle and melt back into the couch; this lush soundtrack takes care of the rest.

When they snuck this on the racks a couple of months ago it was the cover art that got me: Sly Stone with a look of cold messed-up regret, his band cradled in the palm of his hand. It was an eerie way back into music that popped with Larry Graham's "Everyday People" -- bass lines down to the slinky organ work of Sly himself. But it's the newly remastered, full-bodied sound that didn't even seem to exist before that takes this body of work to a whole new realm of consideration.

"Hail to the Thief," Radiohead (Capitol)

I guess you could fault them for overreaching, for barreling through such a vast universe of sounds and doing whatever the hell they please. You could begrudge them their courage of conviction, or their relentlessly melancholy tone, or the disturbed longing of their lyrics. But let's face it, you're just determined to be a naysayer. The truth is, Radiohead is an unnervingly talented, innovative, courageous band, and "Hail to the Thief" has the symphonic range and emotional resonance to remain on permanent rotation.

Double-dipped in classic rock, from the Stones' swagger to the Silver Bullet Band's thumping Midwestern heart, Nashville's reigning duo take a spin down the same dusty trail that Lucinda Williams traveled on her '98 hallmark single, "Car Wheels on a Gravel Road." It's a wide-open path of American youth and nostalgia. All grown up, "Red Dirt Road" hits the right wistful chord for those stuck motoring through a suburban life.

I took pleasure in gunning a fire engine red "Goat" across the iced grid of suburban Detroit in my youth, and the 1971 film "Two Lane Blacktop" with a stringy-haired James Taylor and mystery mechanic Dennis Wilson of the Beach Boys was my odometer. Over 30 years later Berkeleyite Filippo Salvadori re-creates a soundtrack to the cult film with the likes of Sonic Youth and Wilco rubbing up against Roscoe Holcomb and Leadbelly. "You Can Never Go Fast Enough" is abstract, alienated road music that makes about as much sense as the pre-embargo 29 cents a gallon that fueled our Midwestern car craze. Plotless and perfect like the movie.

With a sore back, a denim jacket and a beat-up guitar, John Eddie doesn't win any prizes for originality. But his latest bar-band wonder rocks the way those great John Hiatt records from the '90s did. And the back-to-back "Shithole Bar" and "Forty" ("Well, I guess I'm fucking forty") say more about the American male than an entire issue of Esquire.