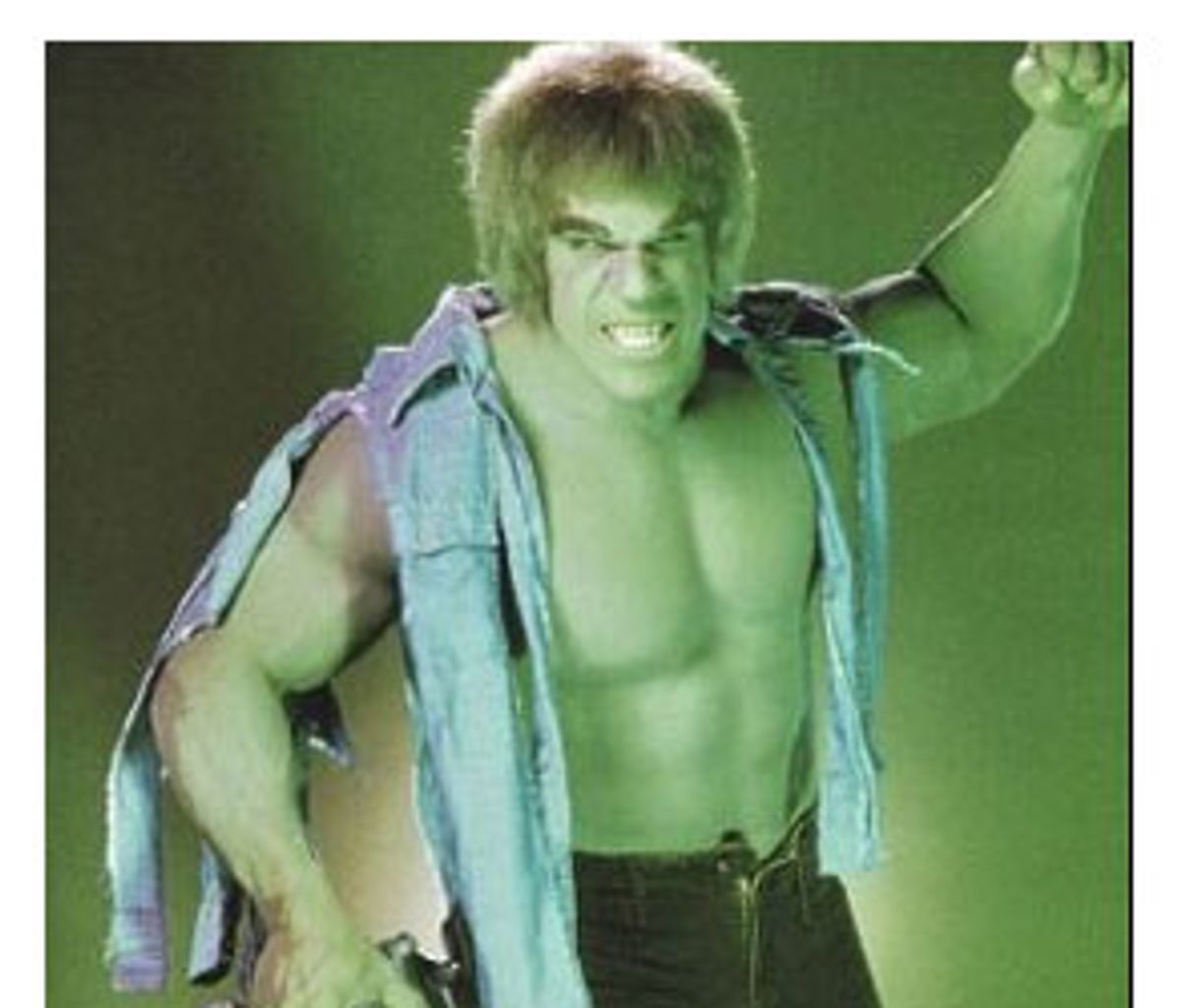 Are all those clips of that computer-generated Hulk twirling and tossing tanks and toppling cars like dominoes getting you nostalgic for the flesh-and-blood "Incredible Hulk" of your TV-watching childhood? You're not alone. Salon wondered what was up with Lou Ferrigno, the strong, silent former Mr. Universe who played the angry green man to Bill Bixby's sweet scientist in the original "Incredible Hulk" series and who has a cameo in Ang Lee's new flick "The Hulk," which opens nationwide on Friday.

So just when the "Hulk" hype was getting really monstrous, we found our way to Ferrigno's official Web site, where we ogled him in iron-pumping action and found his personal e-mail address. (The man prides himself on his approachability.) One thing led to another and before we knew it, the erstwhile Hulk was on the horn, generously offering to answer our questions:

How does it feel to pass the torch to a new Hulk?

It feels good because I'm passing the torch to a guy that can't sign autographs.

So they computer-generated the Hulk because you were irreplaceable?

But you have a role in the film, right?

Yeah, I have a cameo. I play the head of security. I filmed a couple of scenes, but I don't really know what the final cut will be like. I'm looking forward to seeing it at the premiere.

Do a lot of people still recognize you when you walk down the street?

Is there a time when you'd just rather not be approached?

No, I know how to handle it because I've been at it for over 25 years, so I'm used to it. And basically, I enjoy the publicity. I enjoy the people's attention, because most actors are forgotten. I'm glad to still be very visible and very famous.

Do people call you Hulk or do they call you Lou?

How does it feel to be so closely associated with one character?

Great! Because I'm the only living Hulk and there'll never be another Hulk like me. So as long as I can continue to keep up my facade and my physique and do a lot of autograph signing. I go to a lot of conventions to sign autographs. People come from all over the world to meet me.

That's wonderful. Do you ever turn anyone down for an autograph?

Not really, unless it's an emergency situation in which I can't, but most of the time I try to make everyone happy.

What was the biggest challenge for you in playing the Hulk?

Showing the emotion and the sensitivity through that makeup without speaking.

How long did it take you to get into the makeup?

About three and a half hours. It was very tedious but I enjoyed becoming the character.

I was mostly the Hulk my whole life, and I know how to express his fury because I had a lot of inner rage growing up. I was able to express all that sensitivity and inner rage through the makeup. It came naturally to me.

Why do you think the story of the Hulk has such staying power? What's the resonance?

Why? Because all of us have a little Hulk inside of us. We love the Hulk because the Hulk expresses all our inner frustration and anger. The things we want to do, the things we wish we could do, the Hulk does for us.

What sorts of things?

For example, if you're in a phone booth making an emergency phone call and you can't get through and you're very frustrated, you know how you want to smash the phone booth out of rage or emotion? The Hulk does it for us. We have a tremendous frustration inside of us and we learn to control it when we're young because we have a defense mechanism. But the Hulk doesn't have it. He expresses everything.

Let's talk about some of the things you've done since you were on the original series.

I did the voice for the animated "Incredible Hulk" on UPN. And right now, I'm working on "The King of Queens." I have a recurring role and I just finished the third season. I play myself, as the neighbor next door.

Has it been good to be back on a regular series?

I enjoy doing comedy. I love to perform in front of people. It's the instant feedback. I've done comedy before, but I enjoy doing this series because it's a great show with a great cast -- and I enjoy playing myself.

And you've written a book as well?

Yes, I have a new one coming out in one month. It's self-published, called "My Incredible Life as the Hulk" and it's gonna be on LouFerrigno.com.

What kind of stuff is in the book?

Everything about the series, about my life, how I became the Hulk, funny things that have happened. Everything in detail about Bill Bixby, about stuff on the new Hulk movie, meeting Ang Lee, everything condensed into one book. It's beautiful.

You have to read the book.

He's a great guy. He's a perfectionist. It's a lot of fun because he gets what he wants, he knows how to bring out the best. I think he's the perfect director for the job.

Well, because he loves the Hulk. He understands the concept and he wants to take it to the next level. Most directors were afraid to accept this challenge, but Ang Lee's taken it on because he believes in it.

What about your work as a personal trainer? I noticed on your Web site that you have a lot of celebrity clients.

I've been doing that for over 25 years. I have a facility in Santa Monica [Calif.] and I train people from all walks of life. I see both men and women, motivate them to get in shape -- lose weight, gain weight, train.

Including Michael Jackson? He's one of your clients?

Yeah, he comes to me from time to time. He doesn't want to be big. He wants to be toned and lean and basically increase his flexibility. He's been a great client of mine.

Have you trained any other Hollywood types?

Chuck Norris, Mickey Rourke, I've worked with many different actors. But mostly I see lawyers, doctors and blue-collar workers. People that want to be motivated.

Does that take up most of your time?

That's my full-time thing I do between films and motivational speaking and autograph signing at conventions.

A lot of your motivational speaking revolves around your hearing loss, is that right?

I really talk from the heart about my life and what I've done, about what I've overcome and help motivate people so they can mastermind what they can be, what they can do. I've overcome all sorts of obstacles, including my hearing loss, to become a champion, the youngest person to win Mr. Universe -- twice, at 21 and 22. So they see me, they get motivated, because basically I've lived an incredible life.

Well, it's not easy being green, right?

Kermit the frog said it best.