A mind of their own

In his compelling book "Nature via Nurture," Matt Ridley explains how genes don't serve as blueprints for behavior, but instead interact with the environment to create who we are. 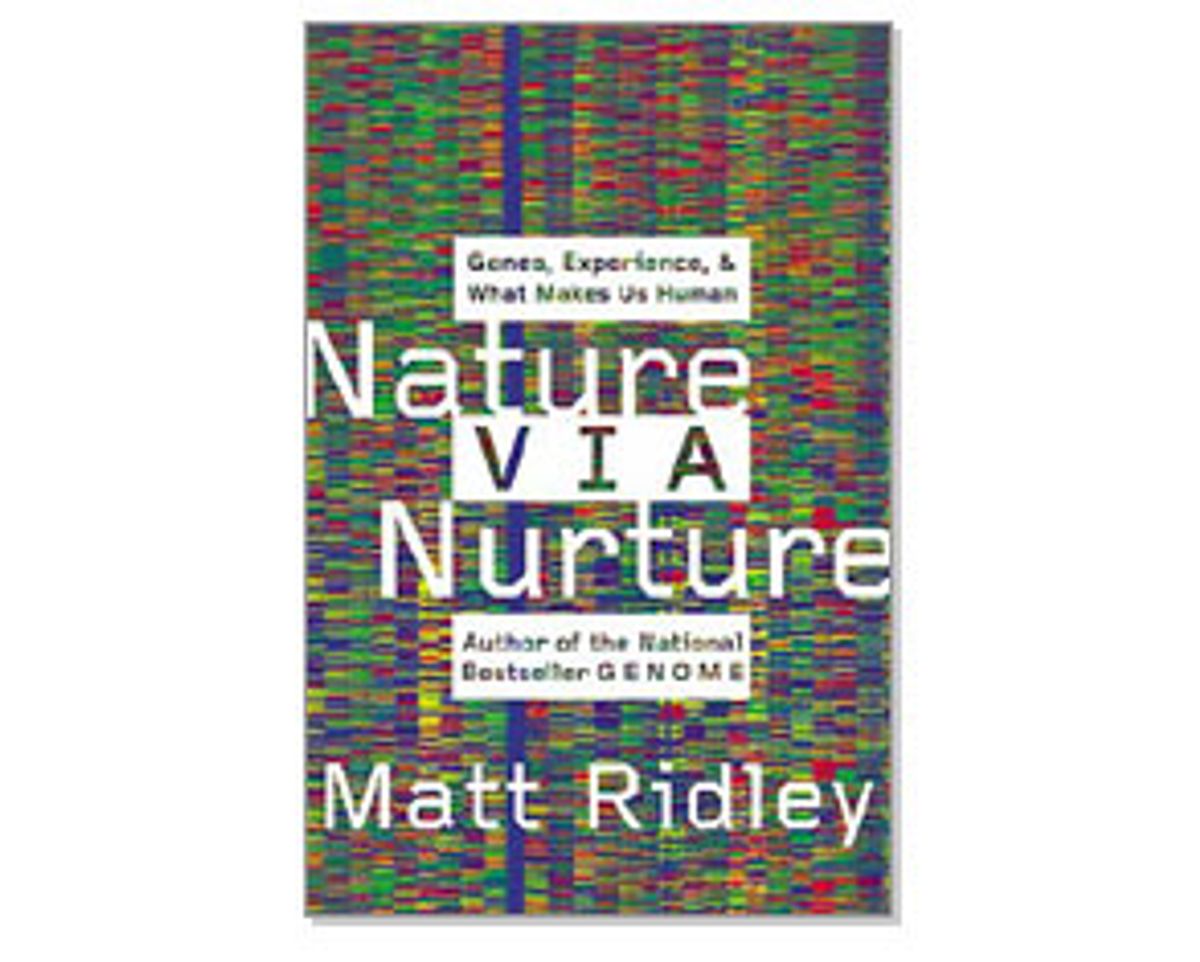 It should be obvious that people are the product of both nature and nurture, both genes and the environment. Take a kid with the potential to grow to 6 feet and malnourish him, and you'll get a shorter adult. Take a potential chess champion and raise him on Nintendo, and you'll get a video gamer.

But apparently it's not so obvious to most people, most of the time. As Matt Ridley's thoughtful and entertaining new book "Nature Via Nurture" shows, the study of human nature has been polarized. One side thinks our genes determine who and what we will be. The other side sees people as blank slates passively waiting for experience to mark them.

Only a few decades ago, behaviorists like B.F. Skinner denied we had any natural tendencies, and suggested we were merely unthinking machines reacting automatically to the environment, so many pigeons pecking at levers. These days, we're obsessed with the idea of "genetic determinism." Look at the fuss a few years ago over the so-called "violence gene," a genetic defect that makes some men prone to criminality. People hated the idea. Protesters picketed academic conferences. Newspaper columnists dreamed up worries about babies being sentenced to prison at birth. At bottom, what people didn't like was the idea that we were helpless before the tyranny of our genes.

People have always disliked the concept of fate and the implication that free will is an illusion. Ridley thinks genes have taken the place of fate in the human imagination. People used to rail against destiny. Now they rail against genes.

But Ridley has good news. He convincingly shows that nature vs. nurture is a false dichotomy. Genes aren't destiny, and neither is experience. Instead, genes interact with the environment in subtle and powerful ways to determine just what kind of people we'll be.

Ridley emphasizes that he's not taking a "middle of the road," "it's a little bit environment, a little bit genetics" approach. Instead, he wants us to change the way we think about genes and the environment. Environment determines if and how genes turn on and off; put another way, genes depend on the environment to tell them what they should do, and even help change the environment they are exposed to. Drawing on the work of a number of scientists in the field, Ridley shows how this is a fundamentally different way of considering nature and nurture than most of us are used to.

We usually think of our genes as being like a blueprint for a building, a complete plan for ourselves down to the tiniest physical and mental detail. But Ridley says that genes are more like a recipe for raisin bread. They carry general instructions for the final loaf, but they don't determine where every last raisin will end up. Between the recipe and the actual loaf, there's a lot of room for unexpected things to happen.

For instance, scientists seemed to have found evidence for the genetic underpinnings of behavior when they bred a strain of mice that was especially aggressive. The funny thing was, these mice were aggressive for some researchers, but not for others. Scientists were puzzled until they realized that the aggressive trait only switched on if the mice were handled by humans when very young. Accidental differences in the way the mice were raised had revealed that environment could switch on a genetic predisposition. Here was evidence that genetics mattered -- but so did experience.

Even more interesting was a similar effect on overall personality, again in monkeys. Researchers bred a line of high-strung rhesus monkeys that, when reared by a high-strung mother, would grow up into anxious, socially incompetent adults. But if these same monkeys were raised by especially calm and attentive mothers, they grew up to be normal and well-adjusted. For monkeys that weren't bred to be high-strung, the kind of mother they had didn't make as much difference. The nervous monkeys had a genetic predisposition to be nervous, but it took the wrong kind of nurture to bring it about.

So how do genes interact with the environment in this way? It's complicated, and we don't understand it fully. But it helps if we realize that there is rarely a single gene for a single trait. Instead, whole armies of genes interact in complex ways -- with each other and with the environment -- to determine who we are. They switch on, they switch off, they switch each other on and off, and they create cascades of molecular events that eventually determine what we'll look or feel or act like.

In a sense, genes often choose their own environment. Someone with the genetic gifts of a good athlete is likely to spend a lot of time playing sports. Someone who is a poor athlete but a good student is more likely to bury himself in books. Because of genetic predisposition, these two children have selected very different environments for themselves.

"Genes themselves are implacable little determinists, churning out utterly predictable messages," Ridley writes. "But because of the way their promoters switch on and off in response to external instruction, genes are very far from being fixed in their actions. Instead, they are devices for extracting information from the environment. Every minute, every second, the pattern of genes being expressed in your brain changes, often in direct or indirect response to events outside the body. Genes are the mechanisms of experience."

Ridley thinks this way of looking at genes and experience opens up a new way of thinking about free will. It gets us beyond genetic determinism, on the one hand, and environmental determinism, on the other. His metaphor is of a flock of birds, wheeling around in the sky. "What is the cause of each twist and turn? Put yourself in the position of a single bird. You turn left, and this causes your neighbor to bank to the left almost instantaneously. But you turned because your other neighbor turned, and he turned because he thought you were turning before you were."

In the same way, the complexity of the interaction between our genes and our environment means there is no simple, direct cause for any of our actions. They arise out of a "circular causality": Environment influences genes which influence behavior which influences the environment. Hiding somewhere in this causal circle, Ridley thinks, is space for free will to exist.

I'm not sure Ridley has solved the problem of free will, but maybe he's right, and this idea of "circular causality" is at least the beginning of a solution. Otherwise, Ridley has written a good book that takes us on a tour of genetics, human behavior, psychology, philosophy, and a half dozen other fields. You might find yourself reading more about the ins and outs of brain chemistry or the history of schizophrenia than is absolutely necessary. But most of the time Ridley uses the depth of detail to good effect. He might even have managed to put to rest this very old, and unproductive, debate.

Kurt Kleiner is a correspondent for New Scientist magazine and lives in Toronto.