As cheerful Chuck Woolery and loony Gary Busey leap into the celeb-reality fray, it becomes clear that stars' lives may be as boring as our own. 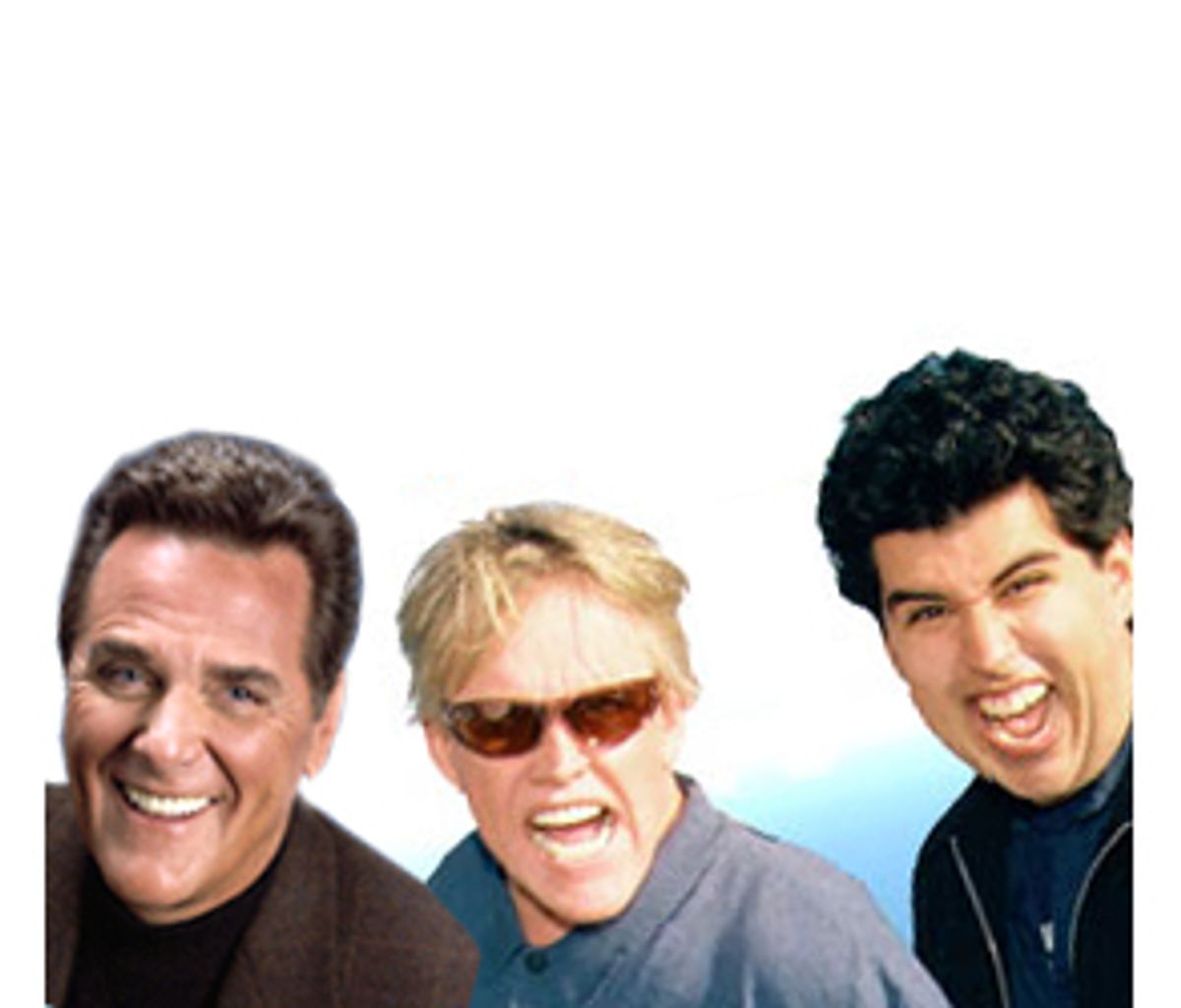 Our culture's focus on celebrity is fueled by escapism and longing. When we gaze at Courteney Cox Arquette's breakfast nook in InStyle magazine, we imagine that her life is just one carefree, pretty moment after another, replete with true love, world travel and really tasty omelettes prepared by her in-house chef. Such a fixation relies on brief glimpses and incomplete images, so there's plenty of room for the imagination to fill in the missing details, projecting its own unfulfilled desires onto each picture.

By dishing up far too much information, reality TV is perfectly poised to burst the bubble of our oversaturated celebrity culture. Here, there are no gaps or details left out, so our projections and desires have nothing to adhere to. Without the whims of imagination, all that's left are strained encounters with co-workers, dull family meals and trips to the dentist. Sounds like compelling television, doesn't it?

Yet thanks to the rampant popularity of "The Osbournes" -- and in spite of the intense stupidity of "The Anna Nicole Smith Show" -- a new wave of celebrities are rushing to contribute to their own demise by jumping onto the reality TV bandwagon. While it was only a matter of time before Roseanne shoved her way back into our living rooms, who knew that game-show host Chuck Woolery and actor Gary Busey would be the next additions to the celeb-reality experiment's subject pool? Why network executives thought either of these subjects would be worthwhile beyond a two-second "That would be totally random!" Keanu-style revelation is anybody's guess, but at least we can count on this latest serving of idiocy to reassure ourselves that the lives of most celebrities are even more hopeless and tedious than our own.

Despite its provocative name, "Chuck Woolery: Naturally Stoned" (Sundays at 9:30 p.m. on the Game Show Network) is so boring you'll end up wishing that you were supernaturally stoned when you watch it. Named after a 1968 song by Woolery's band Avant Garde, the show follows the scary-haired veteran host through his everyday life, from hosting his current show, "Lingo," to spending time at home with wife Terry, their two young sons and her two daughters from a previous marriage.

Rock 'n' roll background or no, Chuck is about as fascinating as your average perpetually tan, 50-something father of four: He makes fun of his bosses, complains about the prices of things and pokes fun at his stepdaughters' boyfriends, all with the roaring laughter and winkedy-winking you'd expect from the former host of "The Love Connection." Instead of mumbling and stumbling around, Ozzy-style, he's helpful and chipper and ... Zzzzz.

On producers: "All producers are a pain in the ass, they can't help it."

On network executives: "When they were born, God said, 'You're gonna look brilliant, you're gonna act brilliant, people will think you're brilliant, but you'll be stupid.'"

On himself: "Sometimes I'm the most interesting guy I know. Ha ha ha!"

Shudder to think. Woolery seems nice enough, and he certainly maintains a sense of humor about himself and everyone else. The trouble is, as witty as Chuck can be, he has a nasty habit of laughing at his own jokes like ... well, like some kind of game-show host.

But the real question is: Why Chuck Woolery? If you want to do a show about a game-show host, why not bring us the head of blatant cheeseball Wink Martindale on a platter? Or what about alleged boozehound and longtime "Match Game" and "Family Feud" host Richard Dawson? Why watch Woolery pose for promotional spots, when you could go behind the scenes with alleged ass-pincher Bob Barker? Instead of watching our favorite childhood baby sitter throwing red paint at women in mink or making lewd comments to some smoothly gesturing blonde, we're running to the Quickie Mart with Chuck as he expounds on the relative benefits of shopping at Costco.

We all have our little quirks, don't we? Or, for those of us who are Gary Busey, we have our great big quirks, like comparing raw oysters to women or trying to light the host of our new reality show on fire. Needless to say, demented highlights like these make "I'm With Busey" (Tuesdays at 10 p.m. on Comedy Central) a bit more exciting and unpredictable than Wooleryland. The show chronicles interactions between Busey and his No. 1 fan, a supposed comedy writer named Adam de la Pena, as they eat seafood and trek across the wilderness together in search of ... well, in search of something to do while the cameras roll, I suppose.

Luckily, with Gary around, something strange is always bound to happen. In fact, he has all the basic traits you want in a reality TV star: He's opinionated, pushy, manic and -- most important -- he seems to have lost every last one of his creme-filled crullers some time ago. Still, he imparts his wisdom to Adam at every turn, spewing non sequiturs without offering much explanation of what they mean. "All men are failed women at birth," he states firmly over lunch. Later, when the two are sitting by the campfire, he says solemnly, "The first thing you gotta know is that when you get lost in your imaginatory vagueness, your foresight will become a nimble vagrant."

As nimble a vagrant as Gary's foresight may be, Gary himself is alternately distracted and antagonistic, and he becomes visibly agitated when anyone else is talking. These aren't the most endearing traits in real life, but I don't think I need to tell you this stuff makes good TV.

In contrast, host de la Pena may be one of the most uninteresting people ever to grace the small screen, and yes, I'm including the collective casts of "Temptation Island," "For Love or Money" and "Are You Hot?" Unlike these shows, which feature highly attractive, dimwitted humans full of bluster and braggadocio, Adam seems to need permission from Gary to breathe. Most of his remarks are either repurposed lines from movies or inane asides that still somehow manage to derail any conversation. He's earnest enough, but he's trying too hard and he's so far out of his comfort zone that he spends most of his time trying to save face.

Gary: "I've been driving the whole way. Why haven't you learned how to drive?"

Adam: "I wasn't interested in it. I rode bikes a lot when I was a kid, so I just never had the use for it. I like walking places."

Adam will make you feel really thankful that there wasn't a TV camera following you around when you were younger. Still, it's fascinating to watch these two in their painful attempts at communication, like getting a peek into a dysfunctional father-son relationship where neither can quite get on the other's wavelength.

Gary (gazing at sunset): "These kinds of things only happen for the first time once."

Adam: "Right. Only once every day."

Gary: "The sun is already down eight minutes before it sets. That's the light from the sun still traveling through the atmosphere to get to our location of longitude and latitude."

Gary: "That's because it's true science."

Adam: "The other end of that, though, is that if the sun were to go out it would take us eight minutes to realize that it went out. Right?"

Gary: "Why are you thinking about the sun going out?"

Adam: "Oh, that would be awesome. Do you have a glass of iced tea?"

Gary: "Only in my mind. And that's enough." (Pause.) "Hey you know what? There's a campfire game. I'll set the end of this thing on fire, and I'll chase you."

Gary: "You have to get away from the fire. This is gonna be fun."

Gary gets up with flaming branch in hand and runs toward Adam.

Adam: "Sweet Christ, I thought you were kidding!"

As amusing as Gary's antics can be, there's way too much downtime -- and alternately resentful and drippy commentary from Adam -- to keep our attention. And while Gary Busey may be one of the best candidates to have his own reality show this year, his show still pales in comparison to "The Osbournes."

Just to illustrate, the latest episode of "The Osbournes" opens with Ozzy at the dentist's office, getting so high on nitrous that he leans over and tries to pour mouthwash on his head instead of into his mouth. Later, Ozzy and Sharon are in bed watching "Access Hollywood" when a segment about the feud between Kelly Osbourne and Christina Aguilera comes on.

Voice-over: "It all started when Kelly made fun of Christina's Christmas CD. Then, in various print interviews, Kelly has said that Christina is, quote, 'one of the most disgusting human beings in the entire world.' And she has also said, quote, 'I've seen drag queens who look better.'"

Ozzy: "You're fucking kidding me."

Later, we cut to Jack on the phone, recounting to a friend how he met Aguilera at a club that night and danced with her. Kelly storms by and screams at him for being disloyal. The next morning, the two kids start shoving each other, Sharon jumps out of bed to get between them, and her pants fall down.

In short, these people are professionals. They do their jobs without even trying. The sad truth for the imitators is that the Osbournes may be the only family in the world whose interactions are more entertaining than anything a roomful of writers could dream up. As the latest spate of celeb-reality TV proves, the lives of most stars -- even insane ones -- aren't half as interesting as we imagine them to be.