The president says he wants the program to expand. But his silence about GOP efforts to cut its funding speaks volumes. 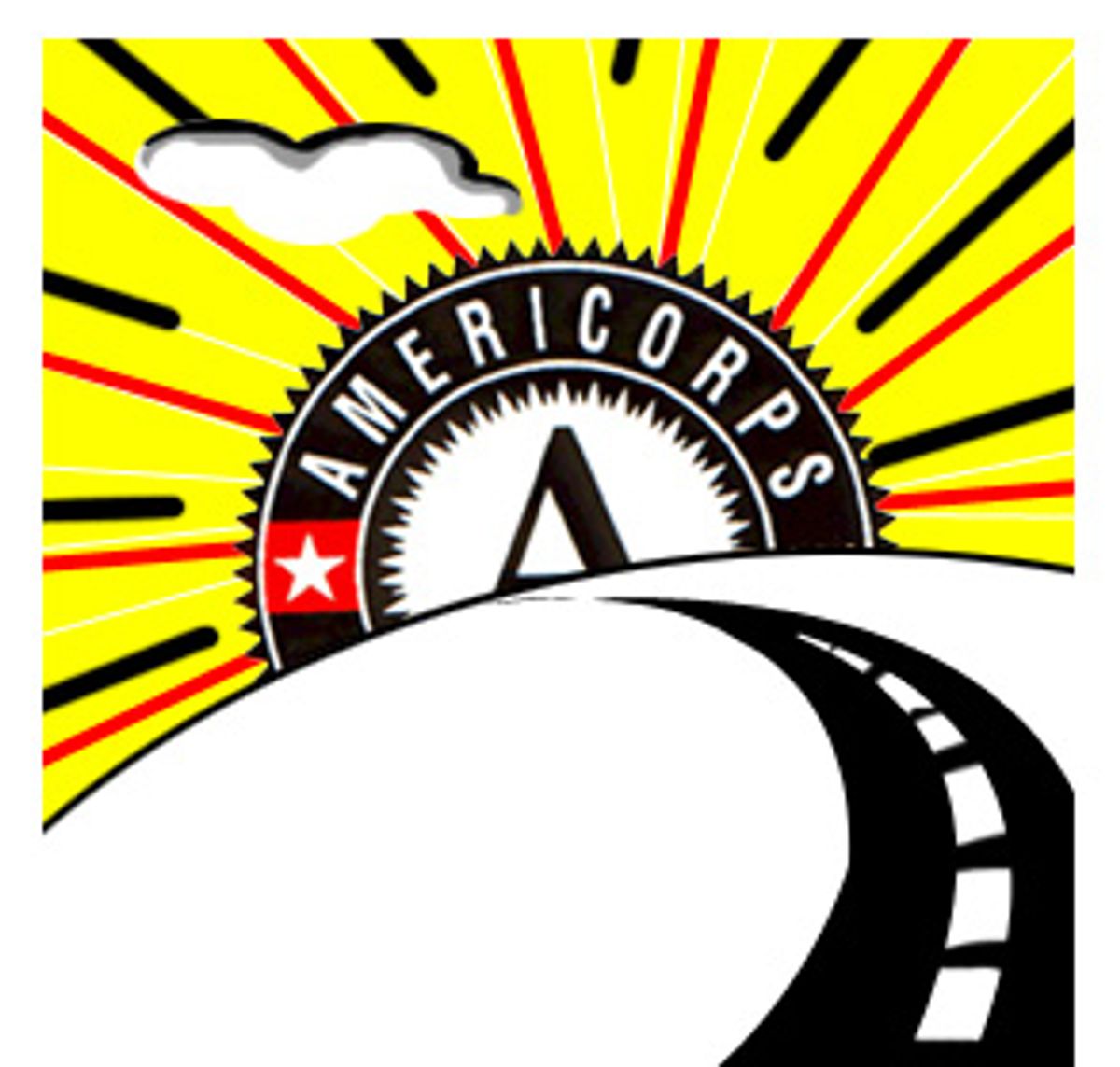 There were days in AmeriCorps that I desperately wanted to quit.

Waking up at 7 a.m. for yet another day of intense manual labor in the thick humidity and hot sun of Mississippi or Alabama; nights spent in small towns where I hardly knew anyone and had no way of getting around. Nearly every waking hour spent with a randomly assigned team of people who were my co-workers and social network for 10 months straight -- and all for what worked out to about $3 an hour.

But there have been many more times when I consider AmeriCorps the best thing I ever did, a time when I played a small role in improving a park and an abused children's shelter and the last few days of some terminally ill teenagers' lives; when I learned to appreciate days spent in small Southern towns with a group of young people from all around the country who became my new family for a year; and when I saw that small groups of citizens dedicated to improving their communities with the support, but not the direction, of the government really can make a difference.

I finished my 10 months in the AmeriCorps' National Civilian Community Corps (AmeriCorps is made up of hundreds of smaller programs; mine involved teams of young people who traveled around a region of the country doing short-term service projects) truly believing in the program. And that's why, despite the talk of war and deficits and recession, I finished watching President Bush's 2002 State of the Union speech with a smile on my face. "Our country also needs citizens working to rebuild our communities," he said. "We need mentors to love children, especially children whose parents are in prison. And we need more talented teachers in troubled schools. USA Freedom Corps will expand and improve the good efforts of AmeriCorps and Senior Corps to recruit more than 200,000 new volunteers."

Despite the continuing opposition of some in his party -- a few of whom even laughably claimed AmeriCorps members are in it for the money! -- I really believed that Bush got it. As a former governor, he had seen AmeriCorps programs working at the ground level. And as president in the wake of the greatest national disaster in decades, he knew that a renewed sense of national unity, one that took American's patriotism beyond waving flags and shopping to stimulate the economy and actually put it into action, was needed. While he wanted to put the name of his own agency, USA Freedom Corps, over it, it seemed clear Bush believed in the ethic of service and the important role of government in fostering it.

A year and a half later, though, the headlines tell a very different story. "AmeriCorps Announces Major Cuts," the Washington Post reported Tuesday. Bush has been promising to increase AmeriCorps by 50 percent, but now it turns out that a dispute over accounting and cuts in funding may force the program to do the very opposite of what Bush promised: shrink by almost half. Already, the director of AmeriCorps has sent a memo detailing how she would have to cut support for state programs from about 16,000 positions to just 3,000.

While Bush's 2003 budget request did slightly decrease funding for AmeriCorps, he hasn't been the prime mover in the decimation of national service. That honor belongs to the Republican Congress, which allocated subsantially less than the president even requested and set an enrollment cap of 50,000 members. A dispute between the General Accounting Office and the president's Office of Management and Budget over accounting procedures has also not helped matters.

Throughout it all, though, Bush hasn't uttered a word in public. While he brags about the benefits of service in speeches, there's been no haranguing of Congress for its failure to reauthorize AmeriCorps, nor for its cuts in funding. Nor is the president taking any time to support those who are working hard to actually fulfill the promises that he made. While the White House is silent, Sens. Evan Bayh, D-Ind., John McCain, R-Ariz., and Ted Kennedy, D-Mass., are pushing a bill that would expand AmeriCorps by 25,000 members per year over the next five years, and link national service to the newly increased need for homeland security.

On Wednesday the Post reported that Bush is supporting a measure that would resolve the accounting dispute and allow AmeriCorps to enroll more members. (By late yesterday, that legislation had already passed both the House and Senate). Good news. But at the same time, the White House isn't taking a position on a $200 million supplemental spending measure that is necessary to expand AmeriCorps as he has promised.

Despite his silence, the president's promotion of tax cut after tax cut that primarily benefit the wealthy while allowing AmeriCorps to wither on the vine speaks volumes. AmeriCorps, after all, achieves a number of Bush's professed goals at a cost of just a few hundred million dollars a year. All of the projects I worked on were about increasing the strength of nonprofits and local government agencies that help citizens in their communities. We worked with a Habitat for Humanity chapter in Alabama, for instance, to supervise the dozens of college volunteers who came over a six-week period to spend their spring breaks doing good. By supporting 13 AmeriCorps members, the federal government allowed one nonprofit to leverage the services of hundreds of volunteers and build about a dozen houses for working poor families.

Does AmeriCorps have problems like any other government program, nonprofit, or business? Of course. But I know AmeriCorps works because I saw it work. I saw the daughter of a dairy farmer from Wisconsin clearing foliage with the son of an army officer from Virginia to build a new trail at a state park in Tennessee and a devout Christian from Massachusetts who never drank or swore helping a straight-edge punk music lover from Ohio work with developmentally disabled pre-schoolers in Arkansas.

Just as important as the work we did was surely the lessons we learned. There wasn't a single person on my team whom I would have sought out as a friend during college, but when I was forced to live and work with them, I bonded in a way I never did with my friends at school. Just as in the military, hard work, cramped living quarters and identical uniforms help establish a closeness that no diversity program ever could. And not only did I see America's problems of poverty, abuse, and environmental degradation up close, but I also saw how the communities that brought in AmeriCorps members to help were actually rallying together to improve things.

Opponents of AmeriCorps like to point out that millions of people volunteer without receiving any government support, and of course they're right. But very few of us have the means to volunteer full-time, as AmeriCorps allows citizens to do that for a year. And, as with our Habitat project, most AmeriCorps members are devoted to leveraging the services of others, making part-time volunteering possible. What the federal government provides is the administration to select worthy programs, the stipends so volunteers can live (and not much more) while serving, and an education award of $4,725 to reward a year of service.

At the same time that AmeriCorps is slashing its spots for members, the number of applicants has doubled since Bush called on citizens to serve last year. That tens of thousands of Americans, many of them young people about to enter or just out of college, want to give a year of their lives to improve their country and are being denied the opportunity is a national tragedy.

After Sept. 11, the outpouring of emotional and financial support for victims and the rise in patriotism were clear signs that, when rallied, Americans are eager to give back and improve their country. President Bush's pledge to expand AmeriCorps was a sign that he was going to turn those emotions into action, helping young people to see that service truly can make a difference and proving to the world that Americans are the generous people we claim to be.

Now, though, it's clear the call to service was just empty rhetoric. National service could have been expanded to become a way of life, making it not just possible, but common for all citizens to follow through on Bush's challenge to "commit at least two years -- 4,000 hours over the rest of your lifetime -- to the service of your neighbors and your nation." Here's hoping the president and Congress wise up and pass something like the Bayh-McCain-Kennedy bill so that hundreds of thousands more people will have the opportunity to see just how transformative an experience miserable, sweaty, low-paid work can be.