One more round of cosmos, girls

For six years, they made expensive shoes, pretty cocktails and cheap sex look like basic essentials. Now it's last call for the women of "Sex and the City." 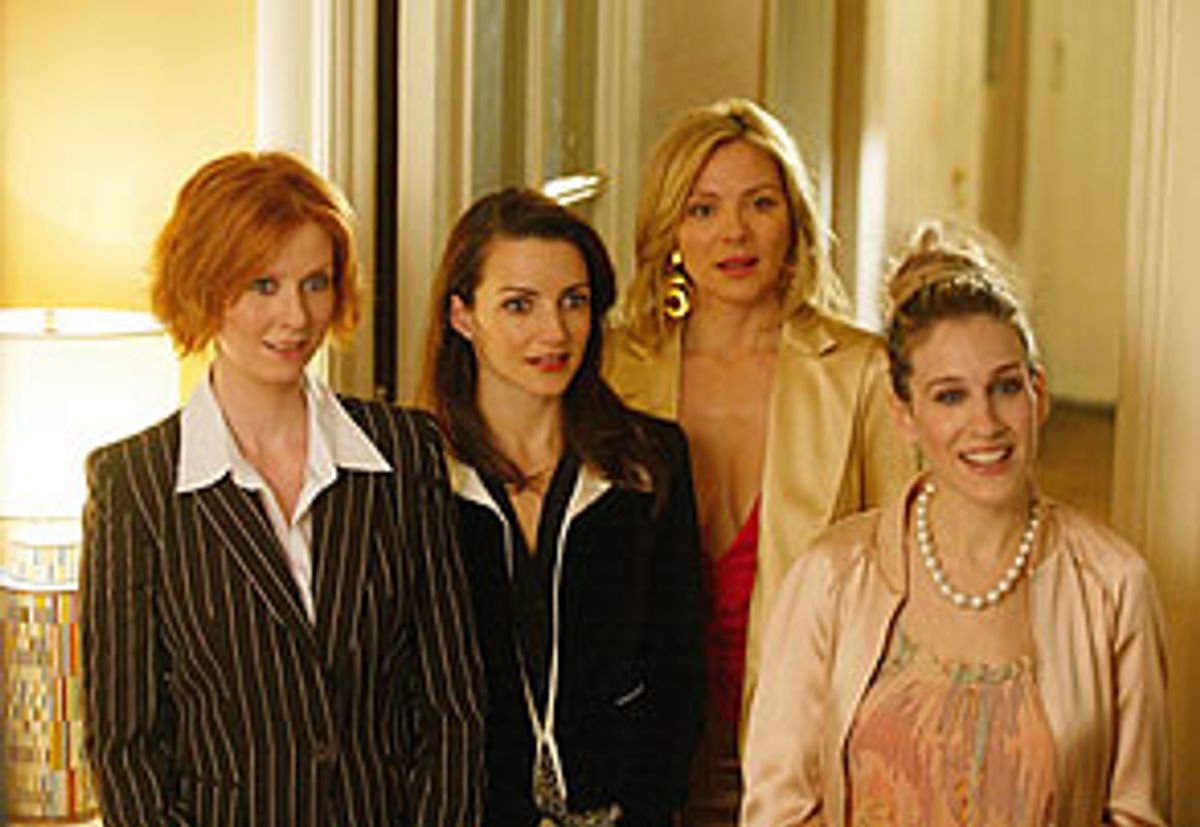 After years of lusting and lunching, the women of "Sex and the City" are ready for the check. The sixth and final season of the popular HBO series premieres this Sunday, when we'll find Carrie Bradshaw and company facing a whole new slew of man troubles, the sorts of perky dilemmas that are easily discussed over martinis and mixed greens. But as any society girl will tell you, even screwing and chewing gets old after a while if that's all you do. Somehow the rapid-fire banter, cackling laughter and bad puns have begun to feel a little hokey and forced, as if the girls have stayed at the party too long, nursing lukewarm Mai Tais and waiting for something fun to happen.

If the party is winding down, it's certainly befitting of a show that built its popularity on vicarious thrills -- the bizarre outfits, the innovative hairstyles, the crazy bars, the countless flavors of hot men. Back in 1998, the opportunity to dish with saucy, well-dressed sluts was impossible to resist, and it only got harder -- er, more difficult -- to avoid over the years, as the fabulous foursome tried everything from bisexuality to bondage.

And then came Aidan. Suddenly all Carrie (Sarah Jessica Parker) seemed to do was whine, episode after episode, over how wonderful Aidan was, and what was wrong with her that she couldn't be happy with this wonderful guy? It was a scenario we could all relate to, for about 10 seconds.

"You can't be happy with Aidan because he wears jeans and jean jackets together!" we screamed at her, as she stomped her Manolo Blahniks and pouted cutely into her computer screen. "You can't be happy with Aidan because he's corny and smug and he has no edge!" But Carrie wouldn't listen. She just kept having really bad days, you know, where one of her heels would break and Aidan's dog couldn't stop crapping? Then, frighteningly enough, Aidan dropped to one knee and proposed with a line he stole from "The Love Boat," and Carrie gasped and raspingly accepted. "The man sands furniture all day long!" we bellowed at our TV sets. "He has a mullet, for Chrissakes!"

Of course we knew Aidan would get dumped, and the predictability of that bugged us, too, but we figured at least we'd be rid of the wanker. But then Carrie spent most of last summer's miniseason stressing out over just how devastated Aidan was when she ripped his heart in two for the second time. That poor guy! How he adored her! He was so demolished he stayed in bed for, like, a month! How could she do that to him? Was she a bad person? "Of course you're a bad person!" we shrieked. "You fucked Big when he was married and then his wife found you and face-planted on the stairs and bloodied her lip! You're a bad, bad person! Why do you think we watch this show?"

But a sanctimonious, mixed-up Carrie was just the tip of the iceberg-wedge salad. Let's not leave out Trey with his limp penis and his meddling WASPy stereotype of a mother. Did we give a rat's ass about that marriage after Charlotte (Kristin Davis) screwed the gardener? I think not, but they just kept trying to work it out, even though we knew very well she wasn't going to stay with an impotent preppy who was still under Mama's thumb. Sure, it was amusing enough that time when she injected hormones and attacked Trey, appropriately clad in a skirt, at his family function. Unfortunately, though, Davis seems to have studied at the Jerry Seinfeld school of acting, and is about as convincing when she's angry as ... well, Jerry Seinfeld.

Miranda (Cynthia Nixon), on the other hand, is damn good at acting angry, so naturally they had her ordering in Chinese food and eating brownies out of the trash can for a whole season. Then they knocked her up so she'd never stop complaining, and now we're destined to lose one of the most entertaining characters to shitty diapers and Bad Mommy insecurity. Luckily, her ex-boyfriend Steve (David Eigenberg), the show's best male love interest, seems to be back in the thick of things this season, which is right where he belongs.

With all the adorably pathetic pouting going on, Samantha (Kim Cattrall) is the show's saving grace. Despite the predictability of her character's story lines, Cattrall brings so much conviction and ravenous flair to her role that she can make the most ridiculous scene feel fun. One of the best moments from the new season occurs when Samantha strides happily past a man holding another man by a leash, then looks horrified when she spots a "Coming Soon ... Pottery Barn" sign near her apartment.

Without a doubt, sex and the city have changed a lot since 1998, when the girls first danced and dined and dished all over town. For one thing, the show should take a lot of the credit -- and the blame -- for making sex talk seem downright mundane. Somehow all of the possible avenues -- big penises, malfunctioning vibrators, oral sex, cheating -- have become cliché overnight. The thrill of hearing four women discuss the G-spot or bikini waxing or faking orgasms has faded significantly.

Of course, a new wave of sex-oriented shows has arrived in the meantime. First there were "Mind of the Married Man" and "Hidden Hills," shows that demonstrated why it's strangely creepy, not lighthearted and funny, to explore how straight married men feel about sex. This fall, there's a new American version of the British hit "Coupling," despite the fact that the original is already an adequate hybrid of "Friends" and "Sex and the City," albeit one that's not half as amusing as it seems to think it is.

Maybe the characters of "Sex and the City" were never that well developed in the first place. Still, if the girls bared their flesh more than their personalities, it's not because the potential for depth wasn't there. A few of the darker episodes that pushed past the level of cartoonish romp -- the one in which Miranda's mother died, for example -- demonstrated that "Sex and the City" could tackle more complex material without losing its essential tone. So why have the writers so often resorted to stringing together puns in the place of real dialogue?

Carrie: (on ringing the opening bell at the New York Stock Exchange): "It was so exciting it almost made me want to invest in something!"

Samantha: "I love the stock market. A room full of screaming, sweaty men all trying to get it up!"

Miranda: "I don't invest anymore. It's too volatile."

Carrie: "Exactly. I like my money right where I can see it -- hanging in my closet!"

Such goofy banter has always been a part of the upbeat pace of "Sex and the City," but these days it seems that instead of anchoring these scenes to real thoughts about love and relationships the writers are just connecting the dots.

Which is a clear sign that the party's over -- or that it should be. But despite flaccid story lines, stale puns and the omnipresence of Aidan, "Sex and the City" deserves a lot of credit for portraying women as complicated, dark beings whose needs are far more complex than the "happily ever after" of most women's television and fiction. Wearing 9-inch heels on crowded city streets is brave, but what's even more courageous is the way "Sex and the City" reflects how unabashedly women pursue love -- and how bewildering and lonely love can be once you find it.

Hbo Sex And The City Television