No, Hogwarts isn't a hotbed of drugs, smoking and sex (at least not yet). But J.K. Rowling's rich and huge new installment unmistakably brings our bespectacled hero into adolescence. 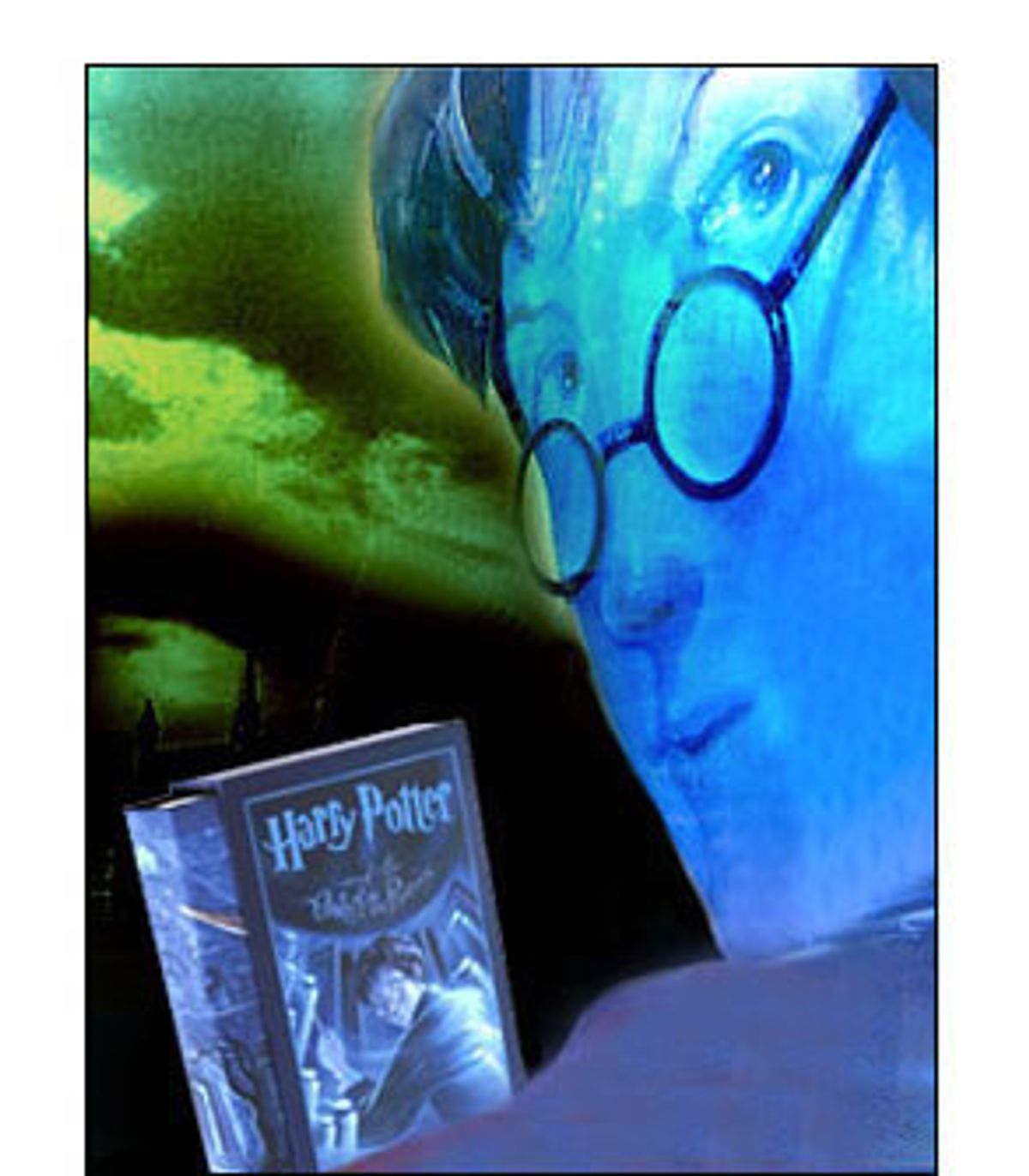 It's official: Harry Potter has become a teenager. The chief sign of this isn't his newfound interest in his pretty classmate, Cho Chang, though there were stirrings of that in J.K. Rowling's fourth Potter novel, "Harry Potter and the Goblet of Fire," published three years ago, and there are further developments on the same front in the just-released "Harry Potter and the Order of the Phoenix." Sexual awakening may be what adults think coming of age is all about, but Rowling is still treating that subject with great delicacy, as befits a writer who has so many loyal readers under the age of 10. Instead, she focuses on what those readers probably consider the hallmark of adolescence, at least if they have older brothers and sisters: Her hero (and theirs) has become sullen and grumpy.

To be fair, Harry has good cause for this new moodiness: After foiling the Dark Lord Voldemort for the fourth time at the end of last term, he's spent yet another summer cooped up with his loathsome Muggle relatives, the Dursleys, nearly cut off from his friends for mysterious official reasons. And once he's reconnected with the magical world, he discovers that the Daily Prophet, the newspaper of record for wizards and witches, has for months been studded with little digs at him and Albus Dumbledore, headmaster of the Hogwarts School of Witchcraft and Wizardry. Some members of the wizard community -- namely, the higher-ups over at the Ministry of Magic -- do not choose to believe that He-Who-Shall-Not-Be-Named is back. As the most visible heralds of this unpleasant news, Harry and Dumbledore are being subtly discredited.

Sure, this is unjust. But does Harry have to snap and rage at his best friends Ron and Hermione -- even at his faithful owl, Hedwig, for Heaven's sake? He does, because he has also arrived at that wretched moment when a young person is not fully ready for adult responsibility and yet no longer feels confident that the Powers That Be know what they're doing. He's 15, and wears his identity like a cheap, itchy, off-the-rack suit, too tight in some spots and hopelessly baggy in others. No wonder he can be so crabby. Yet as impossible as Harry sometimes seems in "Order of the Phoenix," he doesn't completely lose our sympathy. He's Harry, after all, and like family members all over the world, we learn to hold on until the squall passes and we've got our boy back again.

What we also have are the customary delights of Rowling's fiction: favorite characters and new additions, Hagrid's latest pet monster, Fred and George Weasley's newest pranks and their father's charming enthusiasm for Muggle tech. (He gets to take the Underground at one point.) Particularly ingenious is the "Room of Requirement," which can only be found when you really need it, a division of the Ministry of Magic known as the Department of Ludicrous Patents, and a tabloid touting its search for the Crumple-Horned Snorkack, a beast even wizards consider to be mythical.

In an interesting twist, this is also the book in which Harry proves himself decidedly British. If the early Potter novels were about finding one's courage, in "Phoenix," our hero has to figure out the value of self-control. The threats posed by temper and recklessness figure greatly in this book, not only for Harry but for his godfather, Sirius, as well. That's a rare notion in American pop culture, which is always exhorting us to follow our hearts, throw caution aside and let loose with our righteous anger. (Maybe that's why we seem like a nation of teenagers.) In Rowling's view, Harry has gained some power at last -- as his cousin Dudley has learned to his chagrin -- and that means understanding the importance of picking his battles.

If Harry has hit his awkward age, Rowling the writer has already passed through it. "Harry Potter and the Goblet of Fire," her first long novel, was a somewhat lumpy affair; though ultimately winning, it suffered from her lack of experience with the form and her rush to meet her publisher's deadline. If that book was the work of a born storyteller still sorting out her technique, "Phoenix" is the smooth product of a natural at the top of her game. "Phoenix" is even longer than "Goblet," but it never idles or slackens. There's less reliance on startling tricks and reversals and more attention to the underlying organic structures of art. Rowling's hold on the steering wheel doesn't wobble, either. You can feel that she knows just what she's doing, weaving in the threads of the series' larger themes as they grow deeper and richer.

Notice I didn't say "darker," as plenty of critics already have and more no doubt will. Yes, someone close to Harry does die in this book, and a few other troubling things occur. Harry is growing up, which means he's coming to see the world and the people who inhabit it -- including himself -- as more complicated than he ever imagined. Sometimes that means finding darkness where you least expect it, but it also means that virtue, strength and tenderness turn up in the most unlikely places, too. Great kids' fantasy novelists know that if childhood is an adventurous quest, then adulthood is its goal, and there's no real tragedy to getting there -- unless you think children are precious dolls that need to be kept in a bell jar, untouched by life.

The people who do believe that sort of thing may be well-intentioned, but they can also be wolves in sheep's clothing, as is the case with Dolores Umbridge, the villain in this particular go-round. Because Voldemort, the series' Big Bad, tends to stay behind the scenes, each Potter novel has a smaller antagonist who can be defeated by book's end. With the aptly-named Umbridge -- an educational "reformer" and agent of the Ministry of Magic, sent to wrest control of Hogwarts away from Dumbledore -- Rowling has created her best bad guy yet.

A middle-aged lady bureaucrat with a concealed sadistic streak, Umbridge wears pink fluffy cardigans, collects commemorative plates with frolicking kittens painted on them and speaks in a soft, sweet voice. She takes over as this year's Defense Against the Dark Arts instructor (a position as perilous as drummer for Spinal Tap), with the intention of not teaching the students anything at all. Hers is "a carefully structured, theory-centered, Ministry-approved course of defensive magic," that consists only of reading an exceptionally dull textbook. When the children protest about not getting to actually practice the spells, she replies, "You have been introduced to spells that have been complex, inappropriate to your age group and potentially lethal. You have been frightened into believing that you are likely to meet Dark attacks every other day."

Of course, "Dark attacks" are scarcely unknown at Hogwarts, but as far as Umbridge is concerned they never happened and theory is all the students need to pass their exams, "which after all, is what school is all about." This would be hilarious if it weren't so scary. When Harry protests, he gets detention, for which Umbridge has designed a particularly nasty punishment, and slowly, by issuing countless decrees, Umbridge begins to take over the school. Though there's a typically fiendish Voldemortian scheme to be thwarted in "Phoenix," learning how to cope with the likes of Umbridge, an ordinary evil, is in some ways the most interesting challenge that Harry and his friends face during their fifth year.

Umbridge's presence also suggests that not all the foes Harry will confront as he matures will be in the glamorously infernal mold of Voldemort or spiteful nuisances like Draco Malfoy. She represents political evil, both as the classic tyrant figure of boarding-school fiction and an emblem of the growing fissures among the wizards themselves. Even Dumbledore has a thing or two to learn about the shortcomings of the magical world's social order in this novel.

Perhaps the most daring thing Rowling does in "Phoenix," though, concerns Harry's mother and father. Traveling from a child's idealized view of your parents to a more accurate one is surely one of the most difficult passages for any adolescent, and it's rendered even trickier here because that perfect image is all that the orphaned Harry has left. He discovers quite a few more significant truths in "Phoenix" -- about Voldemort, about himself, about Dumbledore and even about his unassuming young classmate, Neville Longbottom -- but what he learns about his father seems of an entirely different order. Rowling steps briefly out of the conventions of the genre to send a shiver of reality through her imaginary world. It's a sign that wherever she takes us next, we can't expect the old rules to apply anymore. But that, after all, is what growing up is all about.