The logic of illogic

In "Stasiland," writer Anna Funder talks to former members of the Stasi -- the communist East German security apparatus -- and to the people whose lives they destroyed. 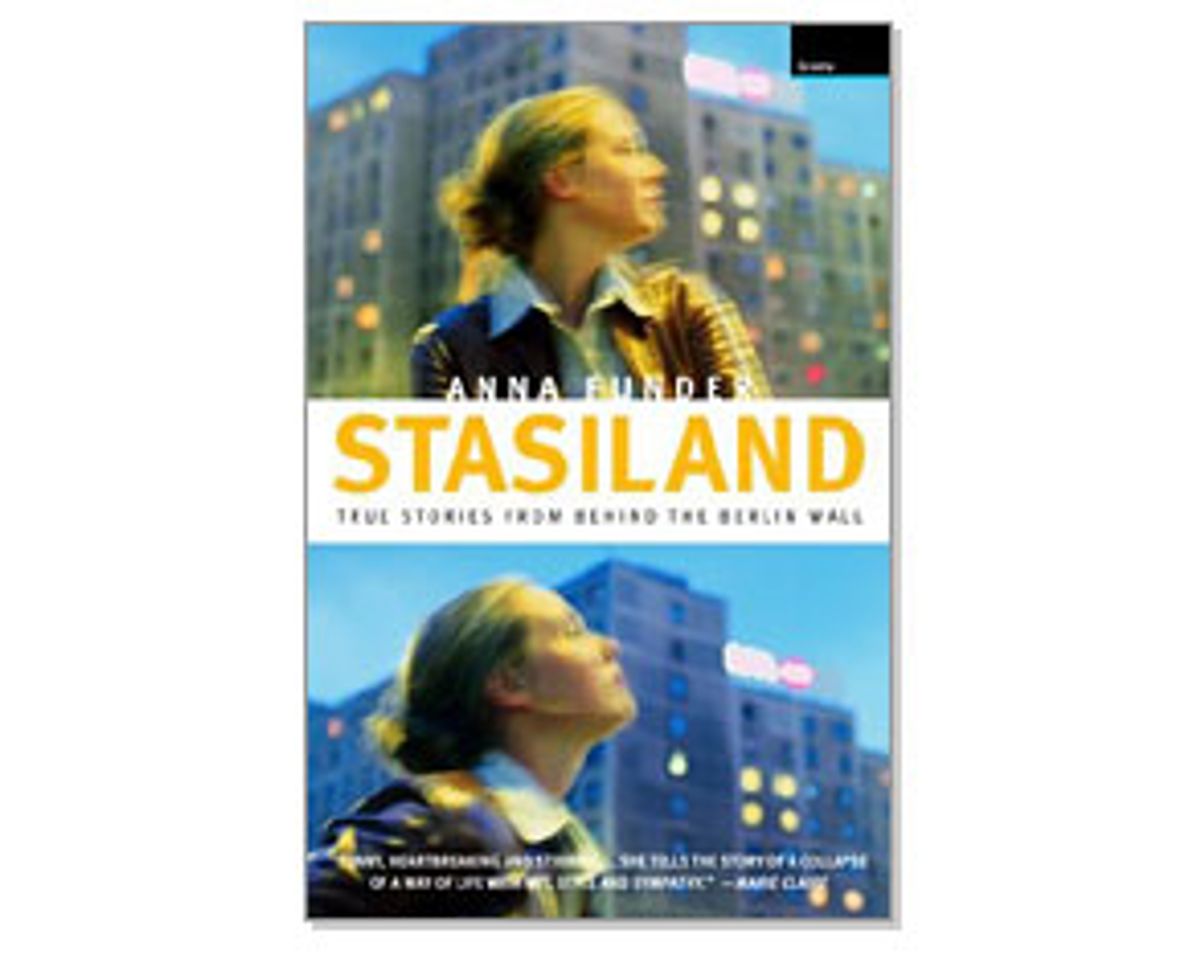 Some writers have to inflate their subject to make it worthy of them. Others take what I call the wrong-end-of-the-binoculars approach: They shrink what they're talking about so they can seem superior to it. The prime exponent of that school is Louis Menand. A few months back, the Incredible Shrinking Critic brought his method to bear on George Orwell in a New Yorker essay. In a sustained misreading of nearly every major Orwell work from "Down and Out in Paris and London" to the great essay "Politics and the English Language," it was inevitable that Menand would find fault with "1984." Treating it mistakenly as a prophetic (that is to say, clairvoyant) fable, Menand basically dismissed the book because its warnings hadn't come true. It's embarrassing to have to point out that by the time Orwell published the book, in 1948, his portrait of a totalitarian future, where thought as well as action is controlled, where the leaders have bought into the essentially religious notion that thought is the same thing as action, had already come close to being completely true in Stalin's USSR.

The Australian writer Anna Funder began living in West Germany in the '80s, eventually working for the state television station answering inquiries from viewers. After the Berlin Wall fell in 1989, she took it upon herself to interview both former members of the Stasi, the East German security apparatus, and the people they spied on. The result, "Stasiland: True Stories From Behind the Berlin Wall," is a mixture of personal and investigative journalism and a reminder that Orwell's vision kept coming true. As the stories Funder hears bear out, the totalitarian logic of illogic was perhaps pursued more rigorously and completely in East Germany than in any other Communist dictatorship.

Funder relates the statistics: "At the end, the Stasi had 97,000 employees -- more than enough to oversee a country of seventeen million people. But it also had over 173,000 informers among the population. In Hitler's Third Reich it is estimated that there was one Gestapo agent for every 2000 citizens, and in Stalin's USSR there was one KGB agent for every 5830 people. In the GDR [German Democratic Republic] there was one Stasi officer or informant for every sixty-three people. If part-time informers are included, some estimates have the ratio as high as one informer for every 6.5 citizens."

One of the worst aspects of culture shock for the East Germans who, overnight, found that their country no longer existed, was dealing with the revelation that the state's spies were their neighbors, family, friends, lovers, co-workers. That's what East Germans have learned from Stasi documents -- and what they are still learning in a steady, painful trickle. When the Berlin Wall fell, one of the Stasi's immediate concerns was to shred their voluminous files. Since then, a group called the "puzzle women" have been working to piece together the shredded files. Their story provides Funder with one more daunting statistic: With 40 workers reconstructing 400 pages a day between them, it will take 375 years to reconstruct all the files.

Like all the stories and statistics "Stasiland" relates, those numbers bespeak a paranoia that's both comic and horrible. One former Stasi official tells Funder that by the end of East Germany, 65 percent of the clergy were working as informers. And 65 percent of the members of one particular East German resistance group were informers. The delicious irony was that these informers swelled the public support for these groups, making it look like there were more East Germans openly against the government than there were.

So we have here the ultimate absurdist spectacle, a state spying apparatus so far-reaching that it nearly ran out of things to spy on. Which isn't a problem in terms of a totalitarian mind-set that can see enemies anywhere. The function of the Stasi was, as Funder relates, to arrest, imprison and interrogate anyone it chose, to open all mail, intercept phone calls, bug hotels, spy on diplomats, run its own hospitals and universities, and to train Libyan terrorists and West German members of the Red Army Faction.

Funder interviews people who suffered the worst of that -- like Miriam, who put up anti-GDR placards as a schoolgirl prank (she was 16 at the time) and was then given a year and a half in prison for trying to escape. There is Frau Paul, whose son was born with severe stomach problems that threatened his life. After the Wall was laid out in barbed wire in 1961, she and her husband were denied permission to go to the West to obtain the medicine that was keeping him alive. "If your son is as sick as all that, it would be better if he [died]," the official she saw told her. The East German doctors who treated the baby were smart enough to recognize the seriousness of his condition and smuggled him into the West. Frau Paul and her husband attempted escape, were caught and given four years' hard labor. She turned down the Stasi's offer allowing her to stay with her son if she helped them kidnap the West German who was aiding refugees.

There are also the Stasi officials themselves: the man who insists all the revelations of the state spying apparatus are smears, the one who regrets what he did, the man who for years hosted a program broadcasting excerpts from West German television to show the decadence of the West. This last man, known to the entire population, seems to have earned a special place of hatred in the collective hearts of East Germans. But his words to Funder about how the Wall was necessary to keep imperialism from infecting the East finds a weird echo in the former Easterners who talk about how much better things were under Communism -- how there were no drunks on the street, how their needs were taken care of.

The stories these people tell, particularly those of the victims of the Stasi, are the heart and drama of "Stasiland." But what pervades and unites all of the separate narratives in this book, whether told by victims or victimizers, is that they form an overriding tale of pettiness writ large. The arrests and interrogations and tortures and kidnappings and murders are the horrors here. Those experiences -- Frau Paul's imprisonment for wanting to be with her sick baby, how impossible it was for those deemed enemies of the state to live their lives or find work even after serving time -- are so deforming to these people's sense of who they are (Funder writes that Frau Paul treats herself as if she were a criminal, instead of the victim of a criminal state) that to describe them as indignities sounds pitifully inadequate.

Funder does full justice to these stories without milking them. She's a good listener and fine at channeling the voices of her interviewees. It's their own words that ennoble or exonerate or damn them. But it is in the minor incidents that you feel what it means to live under a system of rigidly implemented derangement. It's a picture of a land where Orwell's newspeak was the common parlance. And when the people who survived the GDR, or those who still mourn it, talk of that time, it's as if the dead officials and bureaucrats, and the ones still living, have risen to their former prominence to speak once more through them. For the residents of the former East Germany who appear in "Stasiland," the disappeared Wall is a phantom limb. The memory of Communist "logic" is the voice they still lapse into, a type of dadaist fascism that feels less real than imagined. When they relate their stories to Funder, the subjects here speak as if, perhaps this time, it will finally yield some sense. One of Funder's interviewees reports standing in line at the state employment office and asking the man behind her how long he had been out of work. All at once a state official swooped down on her insisting that there was no such thing as unemployment in the GDR. You are here, she was told, because you are seeking employment. The woman pointed out she was seeking employment because she was unemployed; it didn't matter. And nowhere was that doublespeak more apparent than in the name this mingy sliver of the Evil Empire gave itself: the German Democratic Republic.

"Stasiland" is, in its way, a very modest book. It is not a detailed history of the rise and fall of East Germany. Funder does not delve deeply into the reasons why so many East Germans collaborated with the state to spy and inform on their neighbors and families and lovers and friends. Some did it for money, some out of fear, others for the narcissistic thrill of feeling themselves indispensable to those in power. Funder's decision not to go too deeply into the reasons is not reluctance on her part or laziness. It's an acceptance of the worst aspects of human nature, and it shows a deep respect for the horror of the irrational by its refusal to indulge in the sort of psychologizing that only ends up trivializing it. Funder understands that the motives for some horrible behavior do not necessarily go deep. She knows that there are some lands, some corners of the human soul untouched by Rousseauist enlightenment, and that it's a fairy tale to think otherwise.

The crimes of Fascism offend our sense of justice and morality. And while the crimes of Communism do the same, the system Funder writes about here has a weird power to offend our intellect, our respect for logic, rationality, coherence, reason. At its mildest, that's the tinny reductive thinking you find in Communist art (the thing, for instance, that beneath its incredible craft, makes "Potemkin" perhaps the most simple-minded and cartoonish of all great movies). At its worst it is the sense that to have an independent or logical thought, to insist on things as they are rather than as they are said to be, is to indulge in criminal activity. Orwell chose the phrase "thought crime" well -- the crime isn't just in what you think but in thinking at all. And this is the infernal, literally maddening state that Anna Funder depicts in "Stasiland."