The diet guru who brought us "the Zone" now promises that omega-3 fatty acids will save our lives, our souls and our butts. 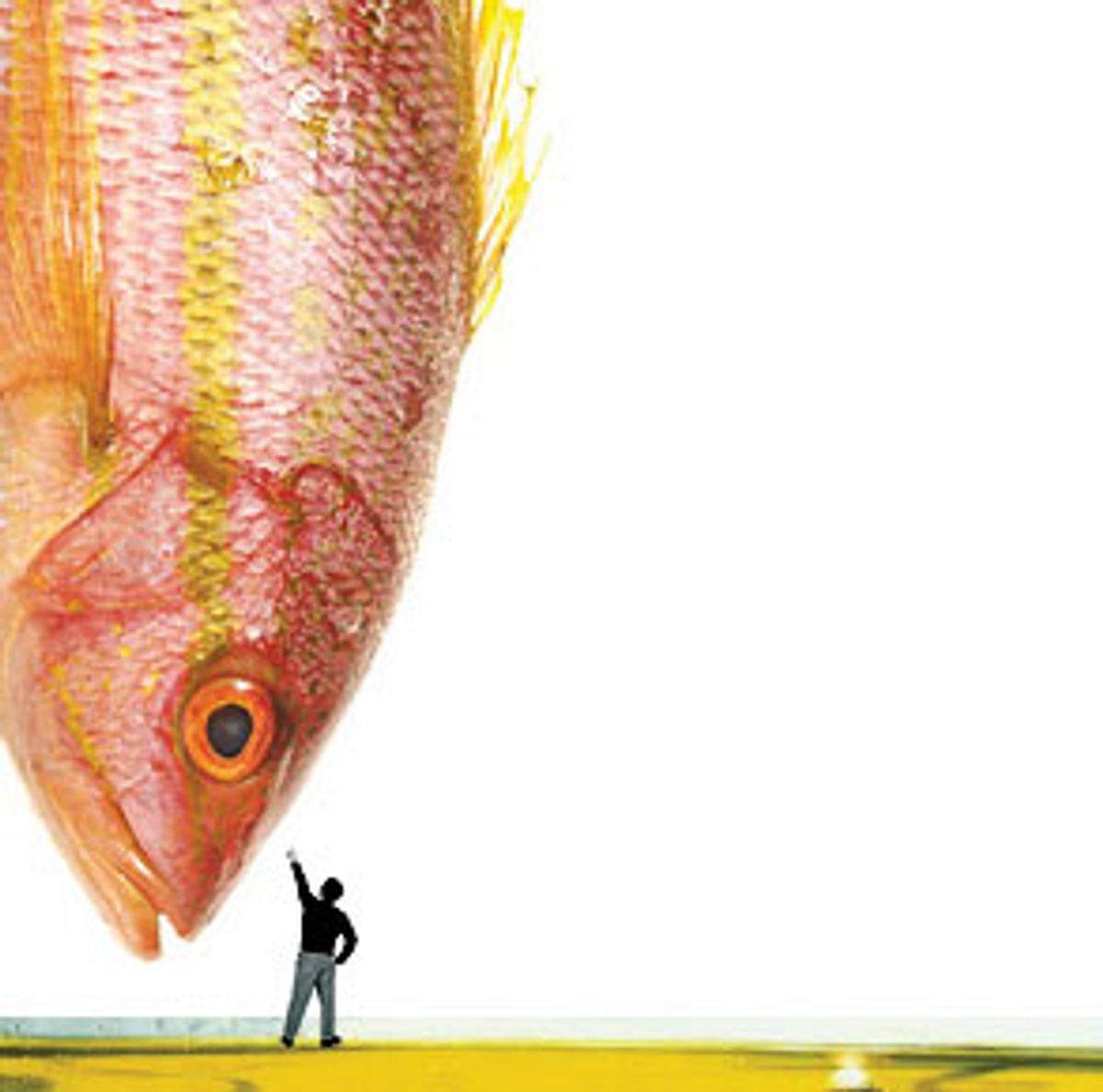 Ooh, jelly beans! On each table in the dim backroom of the Manhattan taverna Avra Estiatorio, which specializes in grilled seafood, there's a party-favor bowl of translucent yellow capsules that I'm famished enough to start eating before dinner. One step closer, though, and I realize I should wait for the canapis. I am, after all, at the other big book event of last week: Barry Sears and the Goblet of Fish Oil. Barry Sears, remember, is the bestselling author of "The Zone Diet," and the "jelly beans," I realize just in time, are squooshy pellets of omega-3 fatty acids derived from fish. They are the stars of Sears' show tonight, the debut of the latest in the Zone series, "The Omega Rx Zone: The Miracle of the New High-Dose Fish Oil." "Pharmaceutical-grade" fish oil, it seems, is the new snake oil. Or -- to put a finer, fairer point on it -- Barry Sears' fish oil is the new cod liver oil.

Last century, generations of children fled in fear of their bedtime spoonfuls of the famously vile home remedy. But their moms were indeed onto something: Rich in vitamins A and D -- and, yes, in omega-3 fatty acids -- cod liver oil apparently helps prevent colds and coughs, promote bone strength, even soothe joint problems such as arthritis. The fish oil supplements, now available in inoffensive pill form, have been around since the '80s. So the impressive benefits of fish oil supplements -- thought to help ward off cancer, heart disease, depression, dementia and other degenerative conditions -- are not breaking news.

But Sears is now making some mighty strong statements about them, including that "fish oil was the crucial dietary factor that enabled our ancestors to evolve into modern humans some 150,000 years ago," that the Office of Management and Budget has urged the Departments of Health and Human Services and Agriculture to revise the country's dietary standards to include his fish oil findings -- and, naturally, that his company is just about the only source of fish oil supplements pure enough to take safely.

And tonight Sears is making his points in a PowerPoint presentation -- with an early slide bearing the ominous heading: "Silent Inflammation: Silent Killer." Silent inflammation? He is talking to a roomful of about 50 Zone enthusiasts about the physical -- internal -- kind of inflammation. Not, say, a swelling bruise, but rather congestion of blood vessels, obstruction of blood flow, growth of diseased tissue -- the basic conditions underlying heart disease, cancer, dementia and so on. You can't hear silent inflammation, of course, but the idea is that you can't see it or directly feel it. "Invisible inflammation" would have been alliterative, and perhaps more accurate -- but it would have sounded less like a very important Lifetime movie.

Sears is a tall, tall man -- a former basketball player, in fact. He has soft, almost blurred features: curly hair, indistinct glasses, some freckles. He is authoritative without being intimidating. Even so -- call me immature -- each time he says "silent inflammation" -- as in, "Silent inflammation basically robs life of all its dignity" -- the term sounds funnier and funnier. When he says, "We've become more inflamed as a population than ever before," I nearly snarf my Shiraz.

The link between silent inflammation and fish oil? Hello, eicosanoids: "The hormones that control inflammation -- the hormones that control your future," says Sears, who has actually been all over eicosanoids since his first Zone book in 1995. (In total, his nine books have sold 4 million copies and have been translated into 22 languages in 40 countries.) There are "good" and "bad" eicosanoids the way there is "good" and "bad" cholesterol. Our friends the omega-3 fatties help us -- as we so often need -- to balance the good with the bad. Result: not just disease prevention, but also -- because fish oil acts like WD-40 for the brain -- clearer thinking, better handling of stress, greater exercise capacity. In his book, Sears even cites cases in which high doses of fish oil seem to have cured at least the symptoms of nonhealing diabetic ulcers, obstructive pulmonary disease and fibromyalgia -- the latter in one day flat! In his presentation, he also mentions a study in which some pigs were fed Krispy Kremes, and other pigs were fed Krispy Kremes plus fish oil. Guess which pigs, at the end, had totally clear arteries? "The barbarians are at the gate," Sears says, referring to the ills of silent inflammation. And "pharmaceutical-grade" fish oil may be the "miracle cure" for 21st century civilization.

All right, so what's with "pharmaceutical-grade"? Why can't we just order the goddamn seared tuna and be done with it? "Fish are the sewer of the sea," declares Sears. (I hope Avra's manager is out of earshot.) They're swimming repositories of all the toxic gunk with which we've polluted their water. So if your idea of healthy is the Nightly Takeout Sushi Diet of the average New Yorker, then yes, you may be getting lots of omega-3 action -- but with a side of mercury, PCBs and other delights of the sea. Sears says the same is true of your average off-the-shelf fish oil supplements, which are not specially purified; basically, you might as well swallow them with water from Brooklyn's famously vile Gowanus Canal. The only supplements that are "pharmaceutical-grade," he says, are those distributed by either Sears Labs or Omega Natural Health.

Not true, says Diana Schwarzbein, author of "The Schwarzbein Principle: The Truth About Losing Weight, Being Healthy, and Feeling Younger" and founder of the Endocrinology Institute of Santa Barbara, Calif. "There are lots of places to get the good stuff." She notes (as Sears does in his book) that there is no standard definition of or requirement for the term "pharmaceutical-grade" in the first place.

"I take fish oil every day and I don't worry about it -- and I just buy the generic kind at the grocery store," says Mary Ellen Camire, a professor of food science and human nutrition at the University of Maine who has conducted studies on fish oil. "It's typically made from the fish in the middle of the food chain, like herring and mackerel, not from the top-of-the-chain feeders who eat them -- so proportionally there's less contamination."

Camire says she'd worry more about the oil being rancid, which is not only gross and stinky, but also self-defeating, and possibly dangerous. If you take fish oil once it oxidizes -- which, being unsaturated, it does easily -- she says, "You're more likely to get rancid yourself." Meaning: Those oxidants in your blood actually increase your risk of heart disease and cancer -- not exactly what you had in mind. Best bet: Buy only 50 to 100 capsules at a time ("I once bought a giant honking bottle at Sam's Club and it went bad before I made a dent," says Camire), in nice, nondusty bottles marked "USP," for United States Pharmacopeia, the group that sets safety standards for dietary supplements. Then keep them in the fridge.

Overall, says Schwarzbein, neither omega-3's, eicosanoids nor "silent inflammation" (which she also thought was funny) is the single key to optimum health. "There's nothing as easy as he tries to make it sound. It's not 'have omega-3's and it will all go away,'" she says. "Taking fish oil is not going to fix your habits."

Of course, you also need to follow Sears' dietary requirements in order to stay in this new Omega Rx Zone, which, 383 pages later, is basically the old Zone plus fish oil. (Intention: overall wellness and longevity, not necessarily weight loss.) This is not the bacon-double-cheeseburger, hold the bun, diet. That's Atkins. Getting into "The Zone" -- i.e., proper balance of hormones, ergo optimum health -- is lower-drama, prescribing moderate amounts of protein, certain carbs and certain fats at each meal, in precisely balanced proportions. How much protein per meal? "Only as much as the size and thickness of the palm of your hand," says Sears, which is all well and good if you can palm a basketball.

Who wants to think about all this? Not you? You don't have to. You can go all Jennifer Aniston and get your Omega Rx-rich meals delivered by "Zone Cuisine" -- fish oil included -- which is incredibly convenient and a total shame if you live anywhere with interesting food (like right here, where the dinner served is Zone-approved fish and vegetables and cheese, so deliciously prepared that I eat about seven Zone "meals" in one sitting). It also costs $42 a day for three meals, two snacks and, of course, the requisite fish oil dosages.

Since the benefits of fish oil have long been understood, it remains to be seen why simply adding them to the Zone plan merits 383 pages of new, or actually not that new, discussion. (The upside is, fish oil is not likely to be the next borage oil, a source of omega-6 fatty acids. That is, as Sears -- to his credit -- explains in his first Zone tome, in the '80s he got a little carried away and bought up all the ingredients of this herb-based oil so that he could control the means of production ... only to find that the oil didn't do what he thought it would. Oops.) So I'm betting this book will be another massive bestseller that no one reads. Sears does do his science homework, but to what end? People will flip to the page with the diagrams of food proportions on plates, order up some fish oil and be done with it, kind of like the way we all turned straight to Page 466 ("I wanted to wring his neck") of Hillary Clinton's "Living History" and then cleared off our nightstands for "Order of the Phoenix." People will "watch their carbs" and palm their proteins, unless it's really good steak or triple crhme brie, plus also smoke a little, skip days (or weeks) here and there at the gym, totally have some jelly beans -- and be much better dinner company than any tiny army of die-hards. And that's the zone I'd like to live in anyway.