McG's sequel -- starring those crime-fighting hotties in all their stripteasing glory -- will probably be huge. Nobody said it actually had to be good. 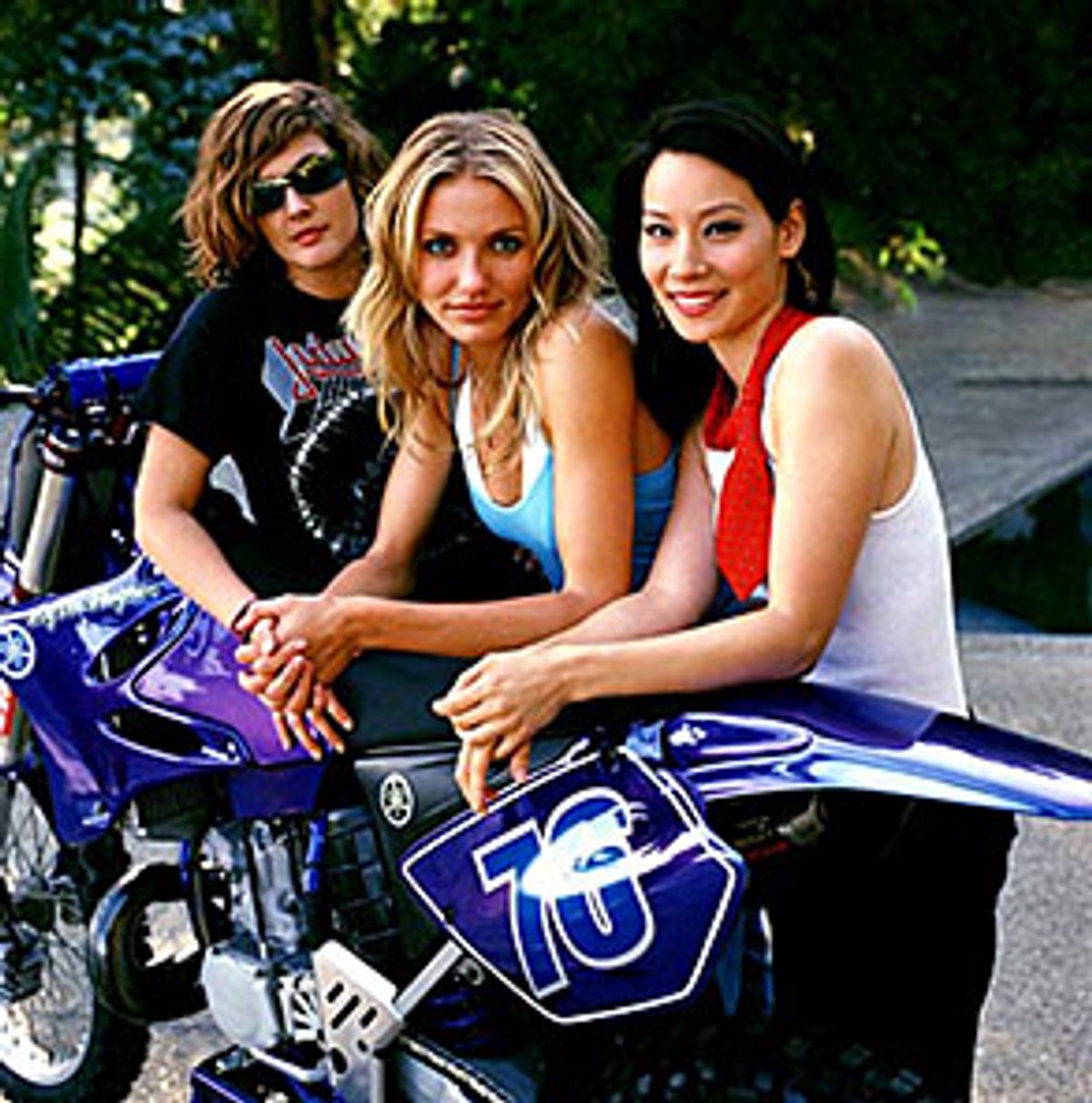 Many of us often ask why today's movies aren't better than they are. The answer is that they don't have to be. That's especially true of a sequel like "Charlie's Angels: Full Throttle," which is likely to become a hit (for a weekend at least) without being much of an improvement on its messy-but-fun predecessor.

The first "Charlie's Angels" didn't have much in the way of bone structure, but at least it had curves. Its three stars, Cameron Diaz, Drew Barrymore and Lucy Liu, shared a breezy, randy, girl's bathroom kind of chemistry. The movie's pace seemed to be dictated less by any overriding internal structure than by its ability to keep us wondering what kinds of outfits the Angels would show up in next: Swiss Miss dirndls? Scuba suits? And damned if it didn't work.

But in "Full Throttle," returning director McG works much harder, for only about half the effect. The chemistry between the leads is still there, but now it's cemented into a kind of sticky glue. When one of them cracks a joke, it hangs in the air a split second too long, displaying its cuteness as if it were a crystal bauble; then the others chime in to affirm the joke's viability with loud giggles, just to make sure we got it. Their camaraderie is airtight, all right -- it's so hermetic it doesn't always let us in. This time around Diaz's Natalie, Barrymore's Dylan and Liu's Alex are like longtime sorority sisters. They're all in on the same jokes, and we're the awkward visitors during rush week.

Why does it matter that a movie like "Full Throttle" isn't particularly well put-together or smartly conceived, when, after all, it's designed to be simply entertaining? It matters because this is the new shape and texture of mainstream movies, and it wouldn't hurt to know there's someone out there who knows how to do them well. Like so many action entertainments today, "Full Throttle" isn't so much a movie as a selection of bits and pieces strung together in a formation that loosely resembles a plot. The Angels, with the help of their right-hand man Jimmy Bosley (played by the wonderfully ever-cranky Bernie Mac), need to rescue two very special stolen rings, rings that hold information on the new identities of every person in the United States' witness-protection program. A number of thugs and creeps are deeply interested in getting hold of these rings, including a ropy-muscled gang leader named Seamus O'Grady (played with shivery comic-bad-guy conviction by Justin Theroux), who also has a link to the secret past of one of the Angels. Somewhere in there Madison Lee (the always tiresome Demi Moore, bludgeoning us mercilessly in a comeback role), a now-retired Angel, gets a chance to suit up in a bikini. And the hair-sniffing Thin Man (Crispin Glover) returns for a scene or two -- he's especially delicious in a demonic flashback scene involving a haircut and a nun. (The movie is also fatty with cameos -- people come and go so quickly that you almost forget whom you've seen.)

"Full Throttle" wouldn't have been greatly improved by a better plot (the script was written by John August, Cormac Wibberley and Marianne Wibberley). But you keep feeling there's no reason it couldn't hang together better than it does. The movie feels manic and rushed, even though, at nearly two hours, it ambles on for far too long. And nearly all the action sequences are choppy and artificial-looking: There's a long motocross scene that's hyped up with computer-graphics effects (bodies flying through the air in improbable formations and the like). But it's a snooze, simply because we know so much of it (though not all) was faked. Whatever happened to one of the great pleasures of action movies -- that is, watching a simple-looking but dangerous stunt performed by a real person? Where's the thrill in watching a collection of pixels execute a septuple midair somersault? They're just dots, for God's sake. When they suit up for work, they've nothing to lose.

It would be so much easier to dismiss "Full Throttle" completely if it weren't blessed with surprising splats of inspired lunacy, as when Bernie Mac, trying to infiltrate an Irish gang, does his damnedest to convince one of them that he's really "black Irish" ("My family suffered for lack o' potatoes!"). In a scene in which the three Angels appear dressed as nuns -- blue ones -- a cutie-pie priest catches Dylan's eye. "'Thorn Birds,'" Alex deadpans. And then there's the moment Natalie, all lithe limbs and google-eyes, plunges her willowy arm into the nether regions of a cow in labor -- à la "All Creatures Great and Small" -- to procure a slimy but healthy calf. The strains of "Born Free" swell in the background like a torrent of afterbirth.

There's no denying that the Angels look good, particularly in a motorcycle-bar striptease routine -- it's a must-see for garter-belt fans of any gender. And McG knows how to use music well, and not simply because he cut his teeth as a director of music videos. He understands how music can give shape, weight and forward motion to a scene. He uses Edwyn Collins' erotically ominous "A Girl Like You" in a sequence where the world's toughest gangsters get ready to make their play for total domination -- perfectly fitting, seeing that power and violence are these guys' voluptuous twin mistresses.

"Full Throttle" should have been either a whole lot worse or a whole lot better than it is: If it were worse, we could simply toss aside the things that are fun and entertaining about it and not even think twice. And if it were better -- well, we'd have fewer complaints all around. But in the bubble world Hollywood has been creating for itself for the past 10 or 20 years now, "Full Throttle" doesn't have to be good. It's encased in its own bulletproof Kevlar bustier. We're not even supposed to notice that it's a designer rip-off and not the real thing.