Bachelor-bait record cover art of the 1950s and '60s focused on the essentials: Boobs, drinking and stag parties! 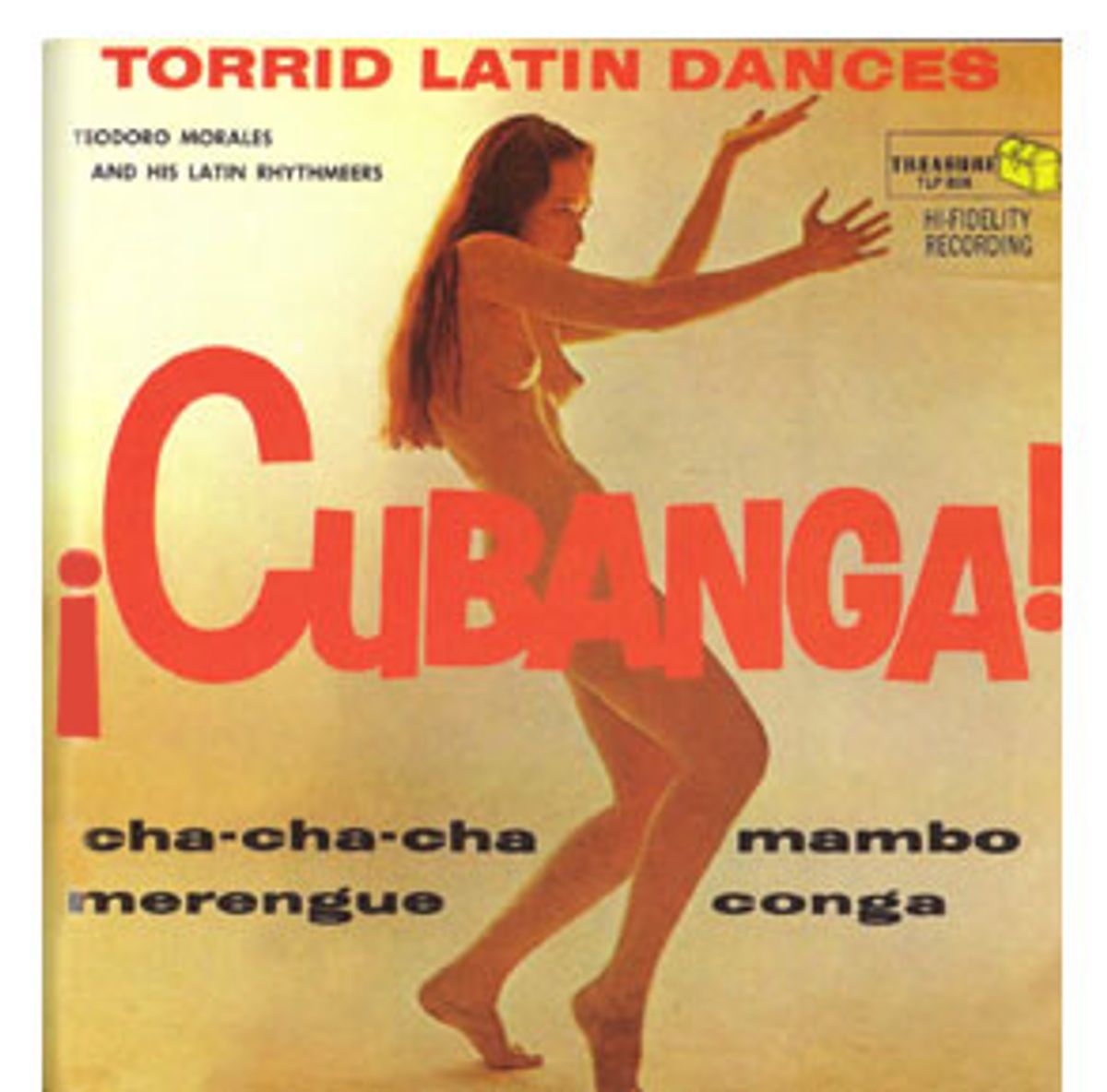 In a time decades before Tipper Gore invented parental warning labels, there was a brand of LP sticker that was brandished as a proud advertisement of adults-only maturity. The album cover of early-1960s vintage "Hollywood's Most Intimate Smoker Stories by Mr. X" (a tobacconist to the stars?) features a picture of a nude woman arching her back over the arm of an ample green brocade sofa, much bigger than a loveseat. Catch my drift? A big red rectangle -- not unlike the one employed by Todd Solondz during that nasty scene in "Storytelling" -- covers her body, on it the words "This is a removable label," one you can easily lift off "without damaging the photo underneath." Oddly, the photo underneath already offers a view of her exposed nipples, and the sticker has the effect of drawing our attention to the funky coffee table in the foreground.

Opening the delightfully trashy "Naked Vinyl: Bachelor Album Cover Art," is like ripping off that red rectangle to reveal a world of boobies, boobies, boobies and drinkies, drinkies, drinkies! It's a trashily enchanted universe where women naturists had an innate predisposition for come-hither looks, bouffant hairdos and exotic dance routines. Or at least they had the ability to hold a pose for a few extra bucks to help the guys spice up their stag parties -- the events the so-called bachelor music was made to accompany.

Stag parties! Such an odd, now mythic, term. Who really knows if they were truly the wild bongo shindigs where martinis shook, fondue pots bubbled and panties flew. Or were they for the legions of nebbish bachelors (and husbands) who were buying, hiding and privately devouring Playboy? Whatever, the stag party was an all-male universe, a place where guys got together to ogle images of women, to boast and guffaw about their sexual conquests and to drink gin.

The book was compiled by two young British guys with definite vinyl fetishes -- world-traveling gadabout Tim O'Brien and the ruggedly named Mike Savage, who actually opened his own record shop in Bristol with the fittingly corporeal moniker, Prime Cuts. And they combed through the bins to uncover three decades worth of ribald record covers -- taking things up through the '80s. It's worth noting that this entertaining collection of randy sleeves is the size of a single: 7 inches instead of 12. Shrinking down the scale isn't a problem, as these covers aren't quite the masterpieces of design and photography or physical perfection that we've come to expect from contemporary CD cover graphics.

Neither are these LP covers a part of the nostalgia that has fueled the cocktail music craze and the gleamingly polished bachelor-era revisionism of "Down with Love" recreations. This is the land of campy squares of low-budget cheese and cheesecake, of nameless bandleaders and club-circuit comedians who tapped into a "blue" vein to move the merchandise. It was the babes that sold these records, plain and simple.

Anyone who has fingered the LPs, perfumed with the scent of musty mildew, at garage sales or small-town thrift stores has doubtlessly seen these ladies of the records, or at least the genres pictured in this book. They're those 1950s instrumental albums --the Nordic-sounding Hugo Winterhalter's island melodies illustrated by a sexy native girl dressed only in a lei (hubba hubba), or the more authentically monickered Teodoro Morales and his Latin Rhythmeers offering the "torrid Latin dances" they call Cubanga! illustrated with a totally naked chick who is getting, well, all torrid. Miss Cubanga to you. And let us not forget the Eastern exotic whiff of Aphrodesia that seemed to be everywhere back in oh-so-sexy late 1950s America.

Was this the precursor to World Beat in the days before political correctness? (The authors thoughtfully include some sample song lyrics that affirm this: "Although he looks as small as Ghandi/ In Spain they call him Mucho Grande / oh how his muscles can expandy, Handy Andy of mine.") The roots of globalism.

Bollocks! These albums were sexist, racist, homophobic and cheerfully alcoholic. But back then, you could be that way without fear of retribution. The collection finds its raunchy inspiration in the genre of the stag party record, albums marketed to "bachelors and broad-minded men." (Wink, wink.) These sophisticated gents were peddled "spicy songs" and spoken words -- potty-mouth burlesque numbers like "I'm a Virgin, But I'm on the Verge" "She Likes to Lick, Lick, Lick," "Things are Soft for Grandma, Since Grandpa's Eighty-Four" and "My Pussy Belongs to Daddy." (None a classic I might note). There is a "sexucational" album of songs sung by Madame Mame, which presents the notion of the bawdy Mae West type who could be one of the boys as she performs songs like "Better Come Bill Bailey," "I Blew Louie in St. Louie," and "If You Think You've Got It Hard." Someone must have busted a gut laughing over that one.

Some of the records offered comedic bedroom farces, ribald comedy acts (which included rather vicious gay jokes), a woman's voice purring her inside story of sex for pay. (Heck, this was also the roots of scripted autobiographical one-person shows!)

The effectiveness of the packaging of cheesecake cover and coarse salt contents seems endearingly complete -- this is one record collection for which you don't necessarily yearn for an accompanying CD compilation of the original songs.

The '60s, the era of Mad Libs and gag gifts, saw a few clever entrepreneurs finding the gold in the form. High In-Findelity, a mock record label, marketed only the fleshy covers, with insert cards stating, T-shirt style, "I bought this album for you as a gift -- sorry I couldn't afford the record!" But that didn't necessarily mean these were cheapskate gift givers; the covers were complete conceptual gestures -- OK, gags -- in which the songs needed only be mentioned, not actually included (that is, until recording technology allowed us to make our own theme-song sets on cassette). "Great Piano Pieces," for example, featured a gaggle of bodacious, buck-nekkid babes at the keyboards, benches and polished tops of pianos. Suggested tracks that could be included: "Dizzy Fingers" and "Kitten on the Keys." A similar formula applied to "Music for Hangovers" (suggested cut: "Soused on the Border") and the funniest of all -- "Songs for Swinging Mothers," which features pregnant women on a swing set, with suggested song titles like "Careless Love," "I've Got You Under My Skin" and "Get Me to the Church on Time." Hardy har har.

Another, more sophisticated genre would be the mood-setting instrumental music to strip or bellydance to (one, issued by a cosmetic company, offered "Music to Bathe By" with a photo of topless, Pre-Raphaelite styled maidens among the lilies) implying that they could serve as "marital aids." These have the aforementioned dancers or undraped femme curled up on the fur rug, expressing her Mystic Moods with one of those terra cotta-colored wine bottles of rosé nearby.

Ah, sex used to be so simple. When the authors carry their theme up through the '80s, covering the more liberated eras of disco and coke, the book loses its focus. The notion of mature audiences shifts here, sometimes to include the soft-core Club Med fantasies of sexy couples on European beaches (where women didn't need bikini tops) or it morphs into the trippy surrealist landscape of a woman's curvy body -- a bit of '60s drug influence and '70s freedoms, but there's not nearly enough of it. And when wading into more recent days, we begin to wonder about all the covers that aren't included: the glam rock, androgynous Bowie influences, bisexuality and Rolling Stones scandals.

I personally missed a little discussion of the Roxy Music pinup girls, who were styled with winks of male pleasure and postmodernism. Perhaps they were a little too sophisticated for this kind of bachelor party. "Naked Vinyl," as a book and as a genre, has the adolescent appeal of a whoopee cushion. Well used, in small doses, an album like "Giggles for Guzzlers" has its historical place as a nostalgia trigger -- especially if you're a stag.